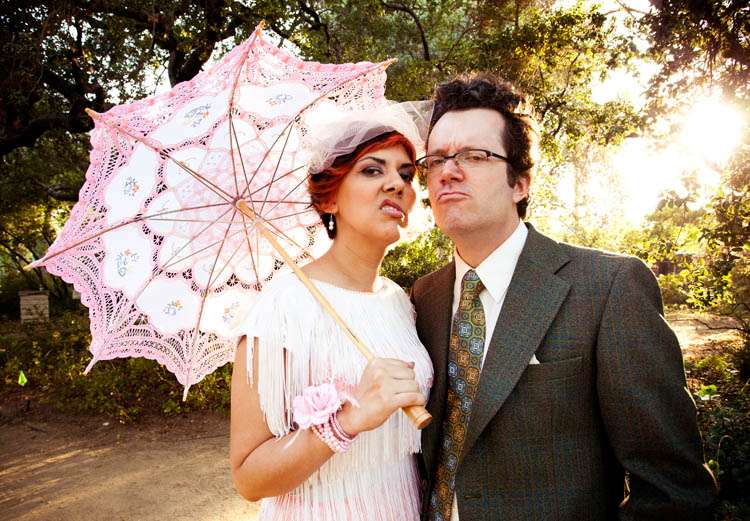 I found Aurora & Ben’s wedding when a blog reader sent me the link to the couple’s blog. I was in instant love and sent them an email right away demanding to know more details! I am muchly exited to share those details with you all. I’ve been reading all your comments that are coming through on the readers survey and judging by your responses methinks you will like this wedding a lot – diy budget and locally-sourced loveliness!

The couple, who paid for the entire wedding themselves were determined to create a wedding that was not only undeniable ‘them’ but didn’t cost them the earth – therefore diy a-plenty was the name of the game! Everything from the bride and bridesmaid’s accessories to the cake and the flowers were all locally sourced ‘bits’ that the wedding party put together themselves. “We were paying for this wedding ourselves, so DIY was our general M.O” the couple told me. “We are very lucky to have talented, helpful friends and family and put their skills to the test! We had people assigned to random tasks in order to pull the day off: my friend from art school and her man executed a paper-plane lined path to the ceremony site; our mutual friend/ My Shero performed the ceremony, our groomsmen set out chairs and later gathered them up, one of our bridesmaids did double duty as our photographer. We even had friends in attendance who helped out without our prompting.  Our friend Courtney brought her own pages from an atlas and had guests who got their early enough to help fold tiny paper airplanes, which were left on everyone’s chair before the ceremony.  As we recessed down the aisle at the end of the ceremony, we were surprised by everyone throwing tiny paper airplanes at us.” 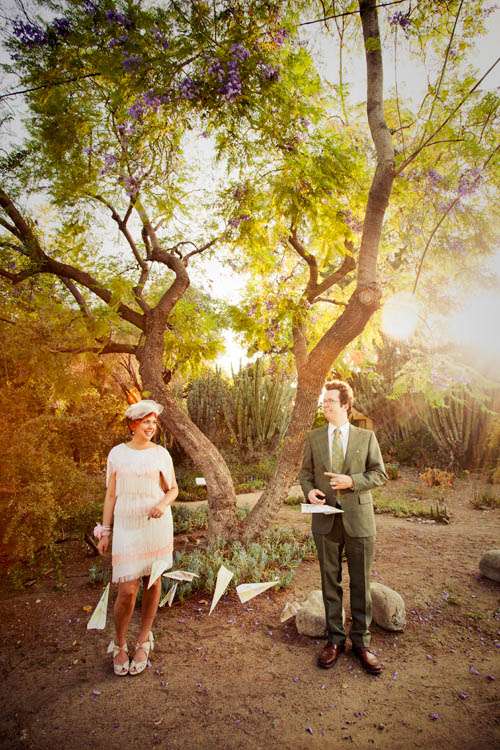 Aurora found her dress at The Majestical Roof vintage store for just $25! “The store is sort of hidden away, but if you happen upon it, you’ll find handmade and vintage treasures galore! My dress was a skint $25, because one of the buttons was falling off the back. I stayed home from work one day, and added the pink fringe and pearls. I also made it backless and added some bling to it that I found in my jewelry box” the bride explained. She teamed this with a birdcage veil that she made herself, Seychelles shoes on sale at Swift Vintage and a bracelet that her Aunt constructed about 10 minutes before the ceremony! “She’s sort of like Mary Poppins. She reaches into her bag, and there is a long pink necklace and a hair clip with a feather flower attached. She hooked some things together, clamped it around my wrist, and I was good to go.” 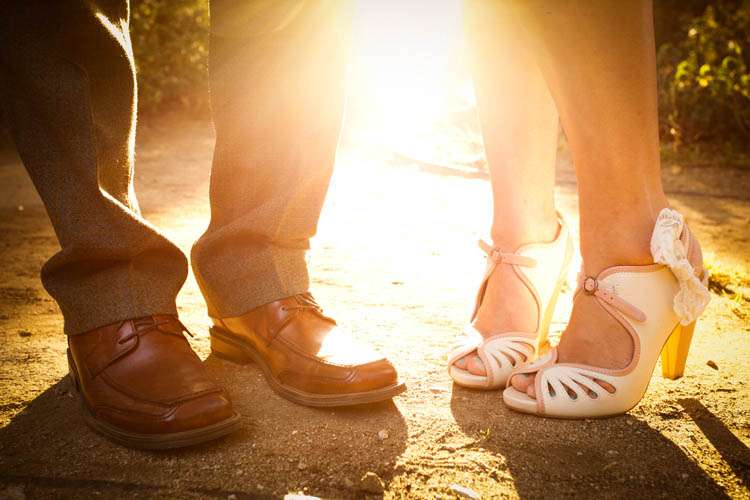 The reception was held at Montrose Bowl, Montrose. “We loved the small (only 8 lanes!) and family-owned vibe of this place” said the couple. “There was tons of parking–much appreciated in Los Angeles and surrounding areas–and the place has been kept true to the time it was built. Teal paint on the walls, a wooden bar, and beer. Instant fun!” As a final touch, their favours were tickets for everyone to go to Angel’s Flight, a funicular railway in downtown Los Angeles. “This was a place that Ben took me on our first date, but at that point it was shut down. Now it’s back in action, so our guests can actually ride it if they choose to use their ticket! It’s the shortest railway in the world, made of wood, and the ultimate in giddy, non-plastic but still fabulous Los Angeles. It was built originally in the 1920’s and fit our vintage aesthetic. Along with the Angel’s Flight ticket (attached to a short story of our first date), we gave everyone a yellow flower.” 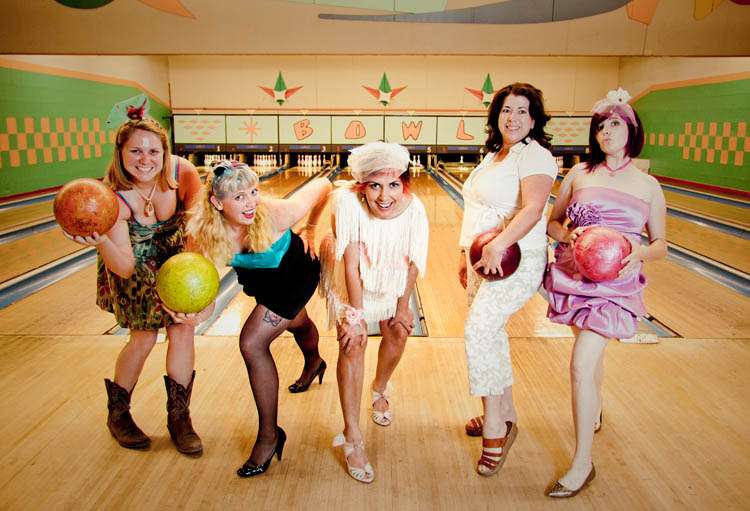 “I feel like we had a wedding that was undeniably us” Aurora concluded “it wasn’t anyone’s dream but our own, and it became our reality. That’s pretty Rock n Roll to me. Also, remember how I said that our friends helped out? One of our gifts–from Chuck, Ben’s best man–was karaoke during the reception! Ben and I love karaoke and this was the gift that kept on giving! We shared our first karaoke song together (“Never Tear Us Apart” – INXS) instead of a first dance, and instead of a Groom/Mother of the Groom dance, Ben and his mom sang “You Light Up My Life” together as a beautiful duet.  People really went for it as the night progressed, and finally culminated in a group sing a long to “We Are the World”. Let’s just say we kept singing the chorus, even after the song ended on the machine. The energy was so deep with love and joy that I almost couldn’t bear it. Between the karaoke and the open bowling and the makeshift photo booth, everyone had things to do and could roam freely.  No one was stuck sitting next to someone they didn’t know at a table and eating dry chicken.” 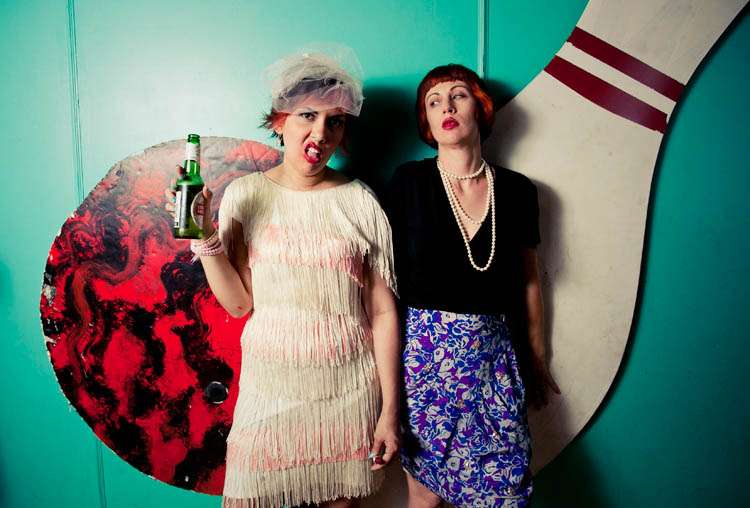 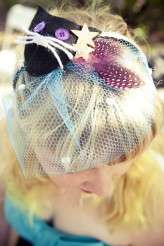 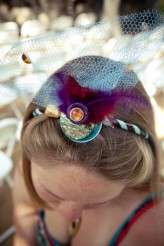 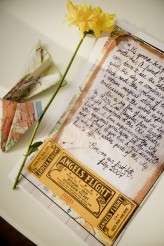 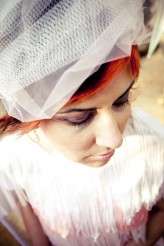 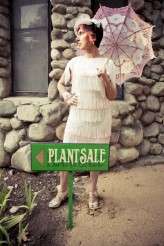 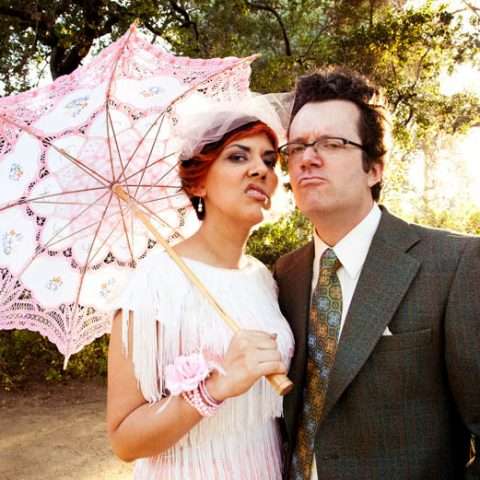 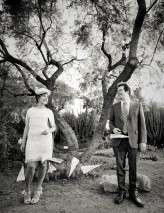 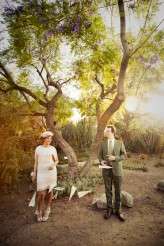 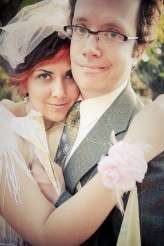 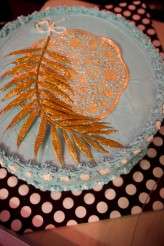 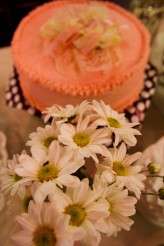 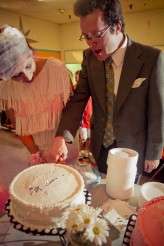 Joe and Kristina spent $300 on their wedding. They didn't want anything big, fancy or extravagant, they just wanted to be married. They said their vows up in Griffith Park Observatory in Los Angeles and afterwards went for drinks and bar food with their friends at Ye Rustic Inn Tavern, where they first met.

Cassidi & Rob were married at Moorestown Community House, New Jersey. They wanted the wedding to have a flea market vibe with touches of Rock n Roll. "Our colors were charcoal, dusty rose, powered pink, mixed shades of ivory and creams", the bride explained. "We had a ton of blue mason jars, old bottles, and milk glass. A million doilies in all shades of whites, creams, and ivory. Each table has random little props, some tables had small vintage white dogs, or old skeleton keys, or buttons."

This colourful ranch wedding winged it's way to me all the way from sunny California. Held at The Holland Ranch, San Luis Obispo, with all the guests staying at the nearby Madonna Inn, the day was one of colour, fun and a rockin' good time! "Our inspiration was to make our wedding as fun as possible and as uniquely 'us'", Jamie, the bride, told me. "We knew we wanted to do it in San Luis Obispo because it's our favorite little town on the coast and would be a destination wedding for our families who live out of town and our friends who live in LA. The Madonna Inn is a special hotel for us and we stay there a few times a year. It's so fun and funky. And we love that every room was different, we knew it would be a fun part of the experience for our guests. As soon as we found the Holland Ranch and saw all the neon signs and taxidermy on the walls of the party barn, we knew it was our place. Plus, it had the gorgeous mountain-backdrop and cool archway for the ceremony. We loved the idea of having our big day all in one location. And the barn was the perfect back-drop for the party! More than anything, we wanted our guests to have fun and from what we've heard, they did!"