Joe and Kristina spent $300 on their wedding. They didn’t want anything big, fancy or extravagant, they just wanted to be married. They said their vows up in Griffith Park Observatory in Los Angeles and afterwards went for drinks and bar food with their friends at Ye Rustic Inn Tavern, where they first met. 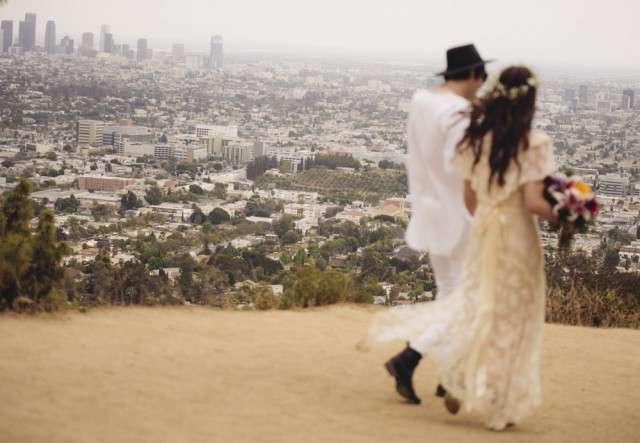 “Joe and I met while he was on holiday in Los Angeles”, Kristina told me. “The night I had gone to a big, fancy Hollywood party and felt totally out of place to decided to leave and check out a friend’s gallery show down the road. I don’t usually do this, but afterwards I decided to grab a drink next door on my own at a local dive called Ye Rustic Inn. I ordered whisky on the rocks and sat in the corner when I saw Joe dancing with a friend. I know it’s a bit of a cliché, but I feel as though I loved him as soon as I saw him. I wouldn’t forgive myself if I didn’t talk to him, so I walked over and opened with a silly bit of small talk. We got along famously all night and exchanged info. We were both attending a music festival later in the week and made plans to meet up… Which we did! We had a great time and tried to spend as much time together as we could before Joe headed back to England about a week later. We kept in touch online for about six months, until I finally decided to visit him overseas as a surprise for his birthday. I went to England for about a week (I was nervous how this trip would go so didn’t want to stay too long) and after a wonderful stay, we decided to keep our long distance relationship going.” 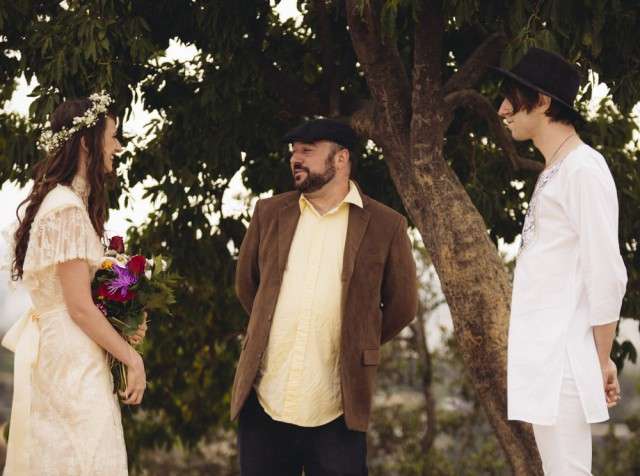 “Our wedding didn’t have a theme but I guess it was had a bit of a 1960s vibe to it as Joe and I both really relate to that decade”, she continued. “I was also inspired by Kurt Cobain and Courtney Love’s wedding. I remember Joe showing me a picture of their wedding that is just the two of them, standing side by side, both of them holding a bouquet of flowers that look like they were found in a field nearby. Although just a photo, it had so much feeling. It said to me that they were thinking, ‘Whatever happens today happens and it doesn’t matter as long as we’re together’. As much as I love going to weddings, I think many of them can become so over-developed and complicated, that the real purpose of the day gets lost. I hoped our photos would make other people feel the way that one of Kurt and Courtney made me feel.” 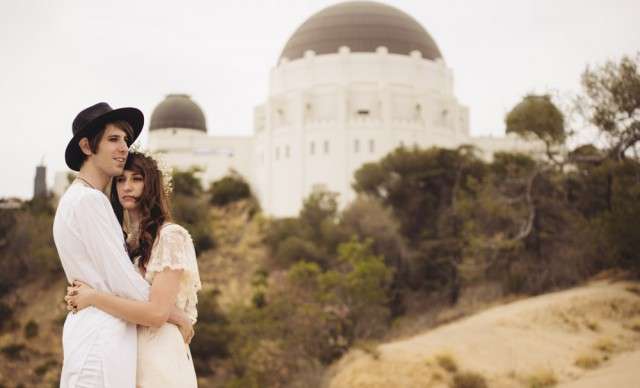 “We completely threw tradition out of the window. We didn’t reserve a beautiful location, we didn’t recite vows, we didn’t have a caterer, we didn’t have a DJ or a band, we didn’t have a cake, and we didn’t invite tons of guests. Not to say we didn’t WANT those things, our budget just didn’t allow for them. We made up for the lack of tradition where we could. We substituted our cake for delicious chicken wings, and a band with the jukebox and the bar. Instead of making toasts, our friends dedicated karaoke songs to us. I did throw my bouquet but not at a reception. Instead I threw it to anyone who wanted to catch it on the streets of Los Angeles. I wish I had a photo of that!” 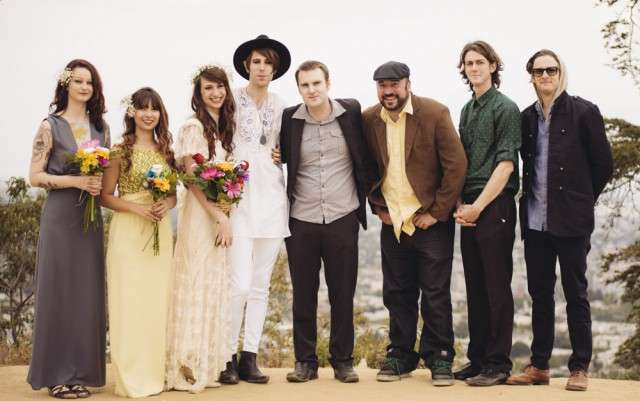 Their ceremony was completely off the cuff, guerilla style. They knew they wanted to say their vows at the observatory but nothing was planned, they just turned up and did it! “Our ceremony was one of the biggest wild cards of the day”, Kristina said. “We knew we wanted to walk up to the observatory and have our wedding outside it, but we didn’t have permission to be there. When we arrived in our wedding garb, our photographer Lois suggested we hike down to a more private part of the park that she knew of which overlooked the city. My long time friend Mark gave me away (since my father was not there) and our officiant Oli preceded with a remarkably short ceremony. We didn’t want to get asked to leave! Joe and I are not big fans are ceremony, especially when we’re the focal point of it so we preferred he only say the essential stuff.” 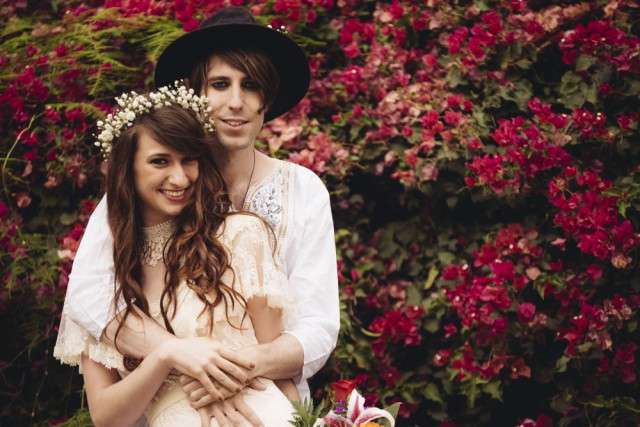 “I got my wedding dress from a vintage wedding dress shop in Downtown LA called Shareen’s. She renovates vintage wedding dresses for her own line, but also has TONS of ‘come as they are’ vintage dresses. Mine was a gorgeous, simple, lace dress from the 1970s that she sold me for $60. My bridesmaids also wore dresses that they got there. I wore a pair of white lace up boots that I previously owned and a beautiful lace choker I got from Etsy. I kept my hair simple with just a few curls and I wore a flower crown that I made from baby’s breath that my friends and I picked up that morning. Joe had more white on then I did! He wore a white embroidered tunic that he got from a street vendor while he was back in England. He also wore white skinny jeans, a wide brimmed black hat, and black Chelsea boots.” 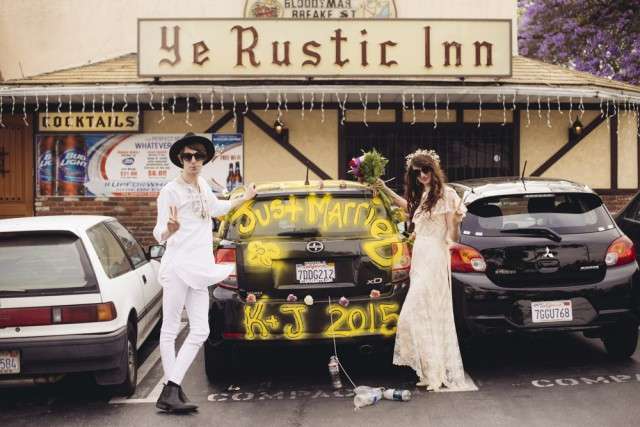 “The whole day was amazing”, she concluded. “But, I think I speak for both Joe and I when I say our favourite part of the day was when we were at Ye Rustic Inn and we heard Helter Skelter come on the jukebox, so we decided to make that our first dance. Joe loves The Beatles and I saw his face light up when it started playing. We had a couple of other songs in mind that we wanted to have as a first dance, but in that sort of situation you don’t really have control of that sort of thing. It made for a fitting substitute.” 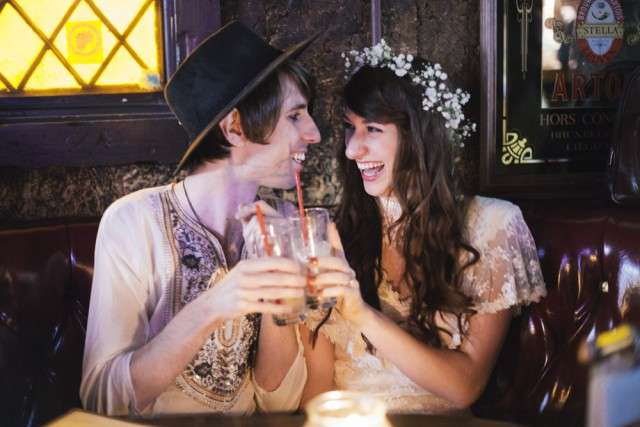 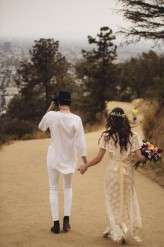 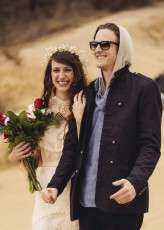 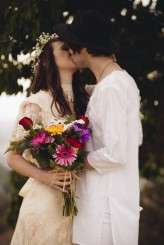 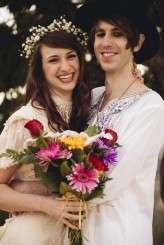 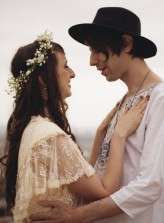 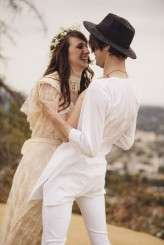 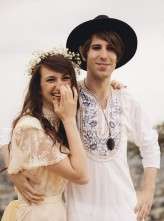 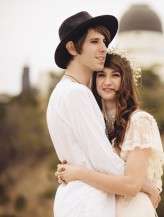 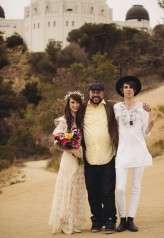 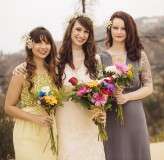 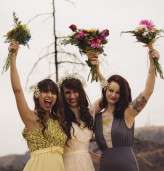 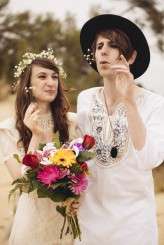 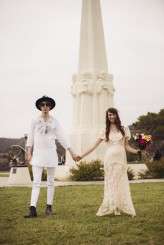 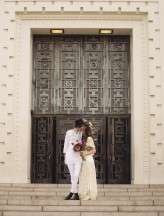 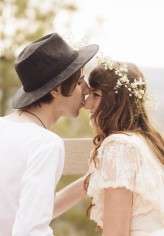 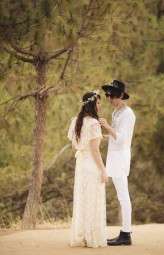 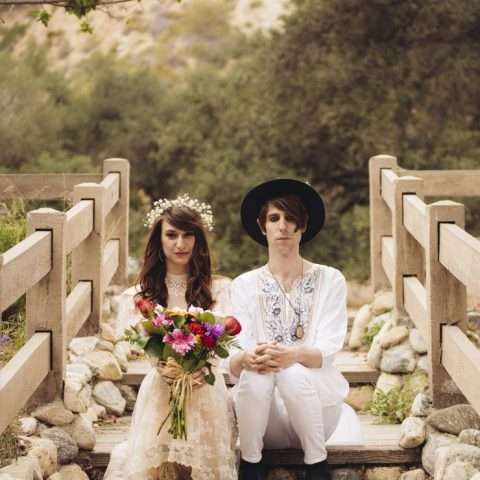 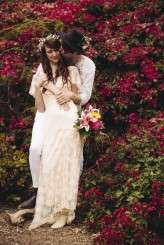 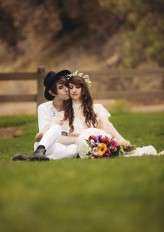 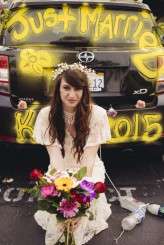 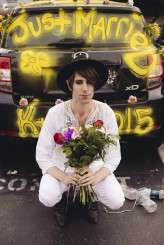 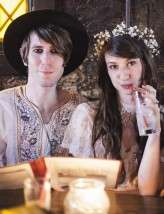 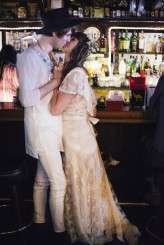 Esther and Todd's wedding was a 1960s inspired celebration held in New Zealand. Being in nature was also important to both of them so they held their wedding at Port Waikato School Camp, an outdoor education camp established in 1928. The site had everything they needed including a big grassy square flanked by long dormitories (ample accommodation!) a dining hall, selection of cabins, and a stunning outdoor chapel where they held their ceremony.