Ella & Sam’s London wedding was such a gorgeously quirky affair that not only I was boiling over with excitement to blog them, but Emily from the ridiculously popular (and in fact one of my personal favourite blogs) Once Wed was too. So we’ve decided to join forces on this one and to both share our favourite bits of this gloriously English affair. For all the ceremony and portraits head over to Once Wed and I’ll handle the beautiful reception details.

You might actually recognise Ella from her sister’s wedding that I also featured on Rock n Roll Bride a while back – who could forget those wonderful red shoes?! While Tara opted for a bright and colourful summer wedding, Ella & Sam’s day was one of enviable vintage glamour and sophistication – with a touch of Rock n Roll of course! I am absolutely crazy for those bridesmaids in sparkly black jackets and the un-corordinated patterned tights (which I think they wouldn have got from Topshop as I have a couple of them in my wardrobe!) Sam’s awesome floral shirt and bow tie combo and Ella’s beautiful Benjamin Roberts dress.

The wedding which was held in Grenwich, London was one of English Heritage and followed by a secret dinner at Davy’s Wine Vaults, decked out with candles and hand-chosen gifts for everyone.

“I always wanted a winter wedding full of candles and fairy lights” Ella told us “and Davy’s Wine Cellar in Greenwich provided the perfect blank canvas for us to decorate and add the personal touches we wanted to surround our guests with. Each guest was given their own personal present as a favor and Sam personally decorated all 80 of the Scrabble-themed namecards to make them laugh upon finding their seat; he was literally covered in feathers and glitter at the end of his little DIY session!  The staff at the venue were so kind and lovely and really made the day. They pretty much let us do whatever we wanted and they let us pick our favourite food, a good old British roast dinner.” 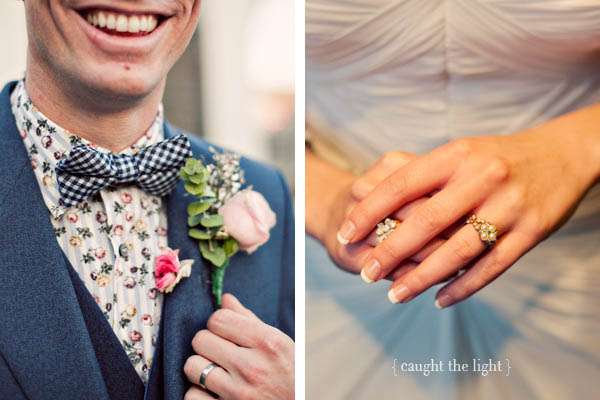 Special thanks to both Chloe, Ella & Sam for sharing this wonderful day and to Emily of Once Wed for joining forces with me to share it in all it’s glory. Be sure to shoot over to Once Wed to see even more!