Kati & Hilal’s wedding made me squeal with delight. It may have primarily been her custom made Skin Graft gown, her L.A.M.B shoes and her dreads that made me so excited, but alongside this inital visual feast, the whole laid back ambiance, feel and ethos of the day really makes me happy. Kati explained her choice of dress:

Basically, it came about like this:  I had seen and bought a few individual pieces of Skin Graft attire during the past few years, and then I noticed that they had a few weddings (within their “gallery”.)  I started an email conversation with them about a year before the wedding.  (Skin Graft consists of 3 core designers and at least one wedding/custom gown assistant.  I envisioned the outfit with Cassidey (one of the core 3) and then he passed me off to Amanda (wedding attire assistant) who finished the project off.  We discussed different types of dresses they had already made, and different things I liked/didn’t like.  They sent photos of previous work, and drawings of my potential gown back and forth via email.  I was measured in San Antonio, and sent the measurements to LA.  When I received the dress I had to have it altered a little, but Skin Graft reimbursed me for the alteration fees. 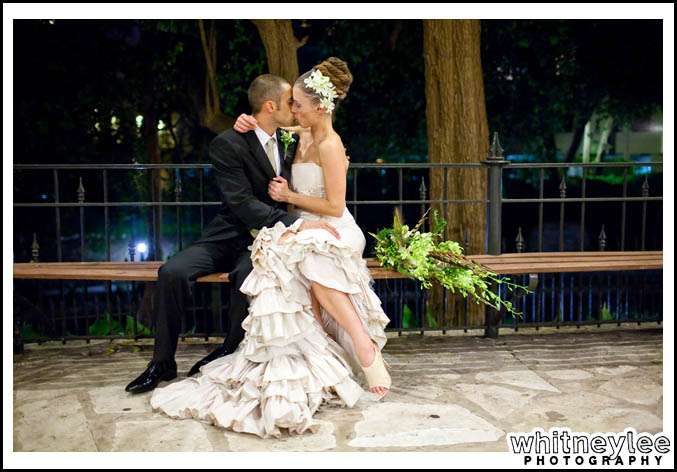 I wanted the dress to actually be a skirt, corset, and bolero vest because I want to be able to wear parts of it again in the future (I’ve already worn the vest many times!).
A lot of their work includes leather, (they have this Victorian meets Wild West 1800’s feel…almost “steam punk” style) so we decided to have some leather applique on top of the cotton corset and some antique brass eyelets for the lacing and a few brass studs to punctuate the design around the leather.  I searched around online for pictures of cowboy boots with cool stitching patterns, and we actually used them for inspiration with the applique design — I think its kind of like a leaf crossed with a paisley.
The skirt is all cotton with a bit of very pale greenish-beige satin in the ruffles and a bit of tulle underneath them to puff them up.  I wore the skirt long during the ceremony, but it had a bunch of clips underneath the ruffles that let me bustle it up for dancing.
The little bolero vest was actually part of their retail line, so we just matched the leather for the applique to that color.
The bridesmaids were wearing skirts and shirts from the Skin Graft regular retail line (2008), too.
They have the clothing for their regular retail line made in Bali, and my wedding attire was partially made by their tailors in Bali and partially made in LA.  The skirt actually started as a piece that they had designed and made a small batch of previously, so that part was made in Bali.  Then when they received it in LA, they added more ruffles and embellishments.  The bolero was ready to go when they got it from Bali.  And the corset was made by hand in LA by their wedding gown coordinator, Amanda.
When I got the gown, I had it taken in a little by San Antonio designer, Angelina Mata.
The flower girl’s green dress was actually designed by me and Angelina Mata, as well.  We used a shirt from my wardrobe and the 1800’s wild west theme to create a dress that went with the whole theme and was comfortable for my new sister-in law!  She was great to work with, too!
I would definitely recommend working with Skin Graft for a special dress, but it was sort of hard at times to get all of the communication straight and decisions made when we were across the country from each other.  Check out Skin Graft for more pics of their work.  The wedding gowns are under “Gallery.”
I definitely recommend Angelina Mata for anyone in San Antonio or Austin that wants to design something with someone who is closer to home.  She also made my mom’s outfits for my wedding and my sister’s wedding, and we think she is just great:)
Whew, that was detailed – but I love the details!

Thanks so much to Kati, Hilal & photographer Lindsey (of Whitney Lee Photography) for sharing this awesome day with us. 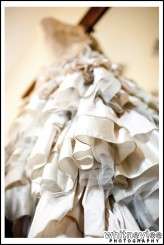 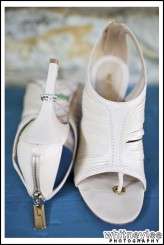 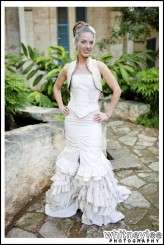 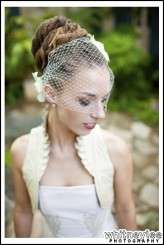 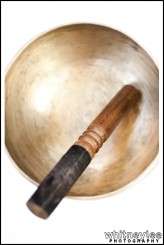