Dave & Pam sure let their imagination run wild with their gorgeous wedding at Canada’s Kopje Regional Park. The Bride is particular loves bright colours and so decided to reflect that in their day by organising and designing the whole thing herself.  Her dress was by Maggie Sottero and the awesome stripey cake was made by Wedding Cake Creations.  For the flowers they relied on the expertise of Art Knapp Plantland & Florists, which meant they got the perfect pink, orange and red (who says they don’t go together!?) flower combo to compliment the rest of the decor.

I love their completely non-boring group shots too! The photographers wanted to find something different and were worried that they might not in such a small town. However when driving one day, the spotted the a mechanic’s garage on the side of the highway and after asking a pretty confused owner permission to use the site they had found their perfect spot. The antiquey sofa and the fun masks add a great finish to the shots and transform them into something that is anything but dull.

Thanks to photographers Emmy & Aaron for sharing this hot damn gorgeous wedding with us! 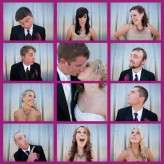 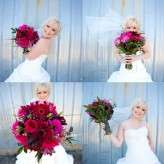 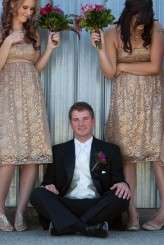 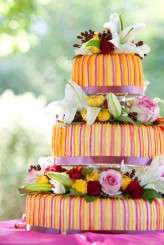 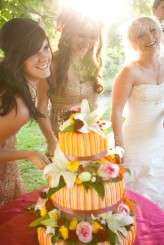