I can’t really explain how much I love these. This totally wouldn’t be the wedding I’d have but how perfect is it for them? The cute, rustic, beachy details are pretty darn fabulous, and isn’t Lola’s Etsy hair band just gorgeous?

Jen describes the wedding:
Victor + Lola were the lovely couple. They were married in Monterey, CA at Adventures by the Sea which is a great little venue located right smack in the middle of the beach. She got ready at the Casa Munras hotel and her
buddies helped with her hair + Make-up. They went for a tropical feel
because they couldn’t get married in the spot they originally wanted which was Hawaii. Also during the bouquet toss Victor disappeared and changed into an Elvis costume (which I was told he wears most Halloween’s) and he then proceeded to do the garter toss in costume. 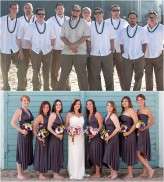 Even in beautiful Byron Bay there's a possibility of rain on your wedding day. But it didn't stop Jacob and Nicola's celebrations. In fact I completely love those rainy portraits on the beach. Magical! Their wedding was held at Clarkes Beach Holiday Park and ran over a whole weekend.