Even in beautiful Byron Bay there’s a possibility of rain on your wedding day. But it didn’t stop Jacob and Nicola’s celebrations. In fact I completely love those rainy portraits on the beach. Magical! Their wedding was held at Clarkes Beach Holiday Park and ran over a whole weekend.

“Both of our families live hundreds of miles away from us, in opposite directions”, wrote the bride. “So when planning our wedding we decided that we didn’t want just 8 hours worth of celebration with our special people, we wanted a whole weekend! We invited the family and a few friends not just to our wedding, but to our family holiday.” 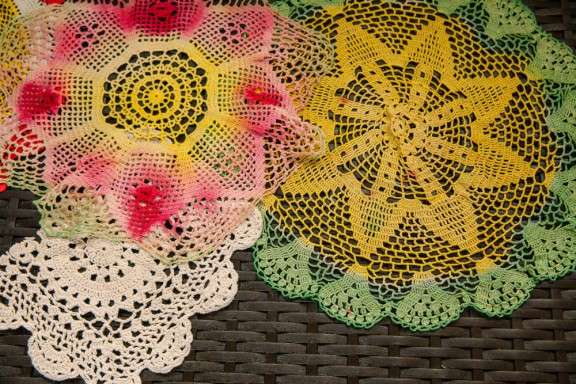 “When we first moved in together we would take our lunch and skate (me on roller skates and Jacob on his skateboard) up to a little lookout over the beach in a caravan park. We knew straight away it was the perfect spot for us and all our family to be together and celebrate our love.”

“Everyone booked cabins or brought their caravans or campers and both our families literally became one, over an old-fashioned caravan park family holiday weekend. It was just like when we were kids. Grandma and Grandpa were next door to my high school best friends, my Uncle and Aunty were having a beer with Jacob’s cousins, and our Mums were sneaking off down to the beach together for ‘Mother of the Bride and Groom chats’… We had games of frisbee on the beach, swims in the ocean at all hours, friends crashing on couches and a whole lot of love shared.” 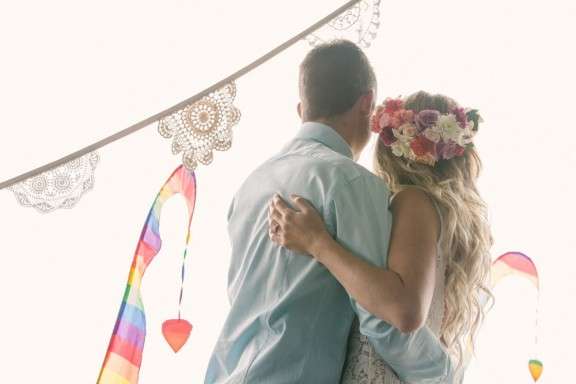 “If we were to have a theme it was ‘natural'”, she continued. “Nothing was forced and we had nothing to prove. We had no brand names and no dress code. There was no seating plan, no colour theme and no shoes on the bride! The cakes tasted heaps better than they looked and that is a metaphor for our day. We didn’t mind how our wedding looked on the surface because we knew the good stuff was there in the family and friends we were surrounded by.” 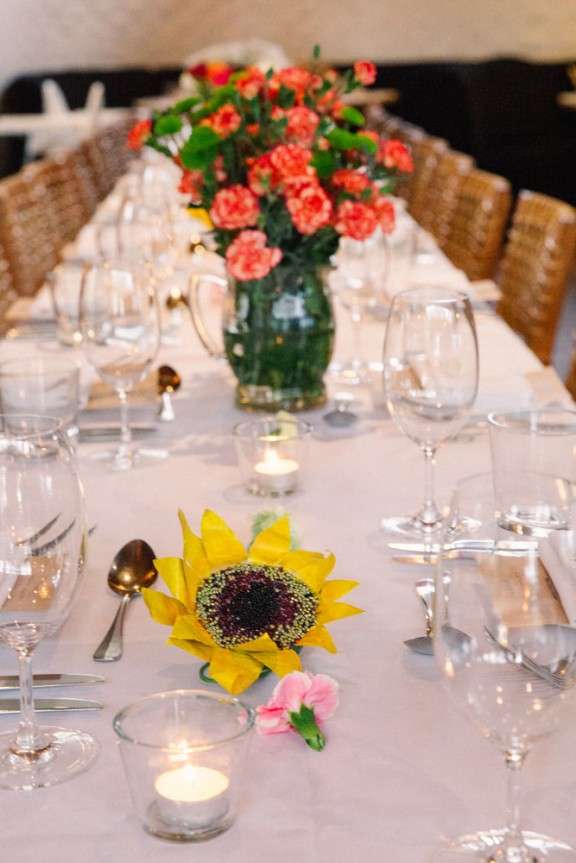 “We also did heaps of DIY”, she said. “My little brother made us the wooden signs, which mean the absolute world to me. Plus they look even better than in my imagination!! The dream catchers were made from lace doilies from opp-shops that I dyed with food dye, and Jacob made the frames with sticks from our garden. Lots of the kids and friends created the beautiful dream catchers. The bunting was also made from opp-shop doilies  cut in half! I made that myself on Jacobs Dad’s sewing machine two days before the wedding.” 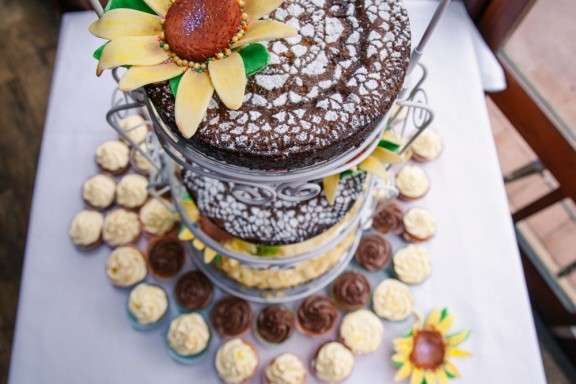 “One of my favourite things from he wedding, apart from everyone being together, was my dress“, Nicola concluded. “It’s made from second hand lace tablecloths and it is the most beautiful thing I have ever worn. I love that it’s had a whole life before this. Its got character and energy and I almost get offended when people ask ‘What are you going to do with your dress?’ like there was any other option than KEEPING IT FORVEVER AND EVER AND CHERISHING IT LIKE THE HEAVENLY THING THAT IT IS!”

“But in all seriousness, it was love at first sight, I bought it online and although it wasn’t actually made for me, it fits better than if it had been. I was so lucky to have found it early in the planning as I think it put me at ease… I was like ‘well worst case scenario, he’ll be there and I have my dress;’ haha!” 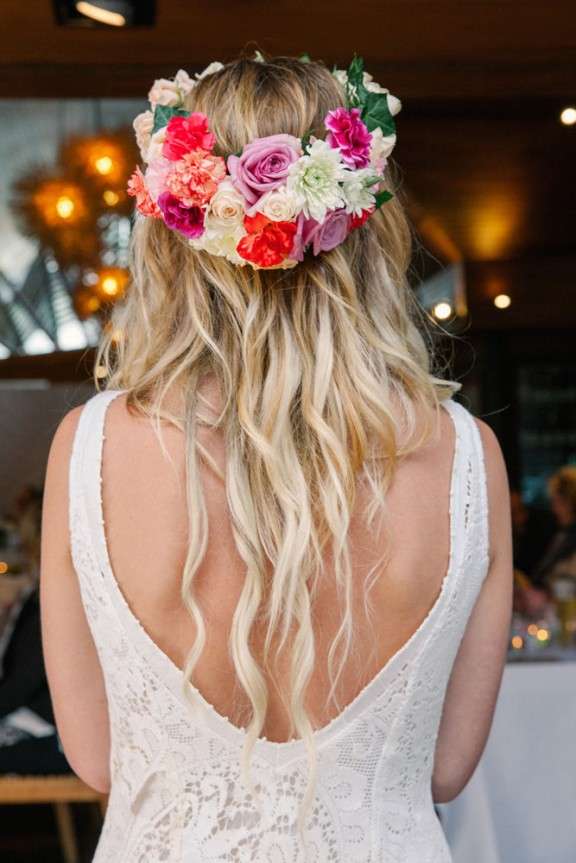 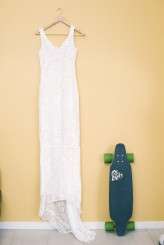 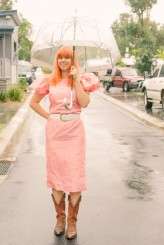 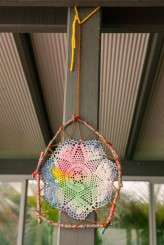 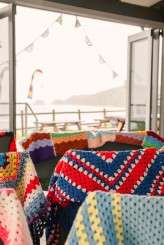 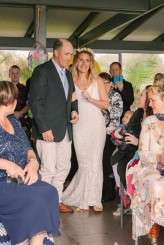 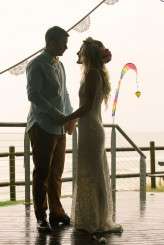 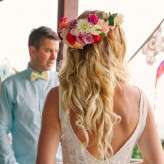 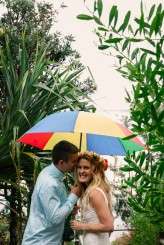 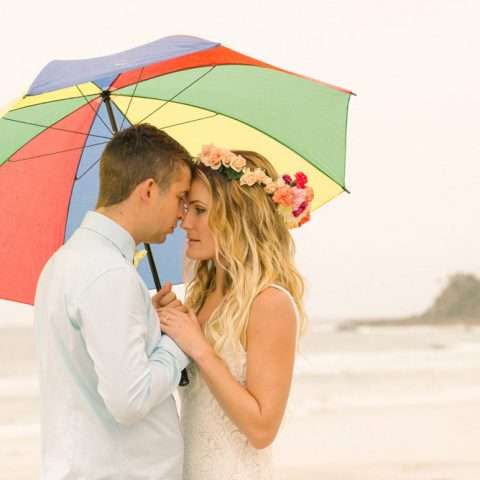 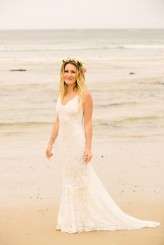 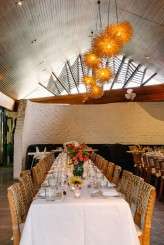 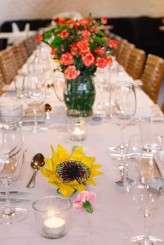 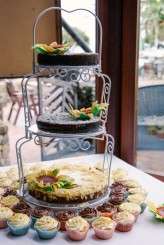 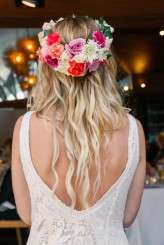