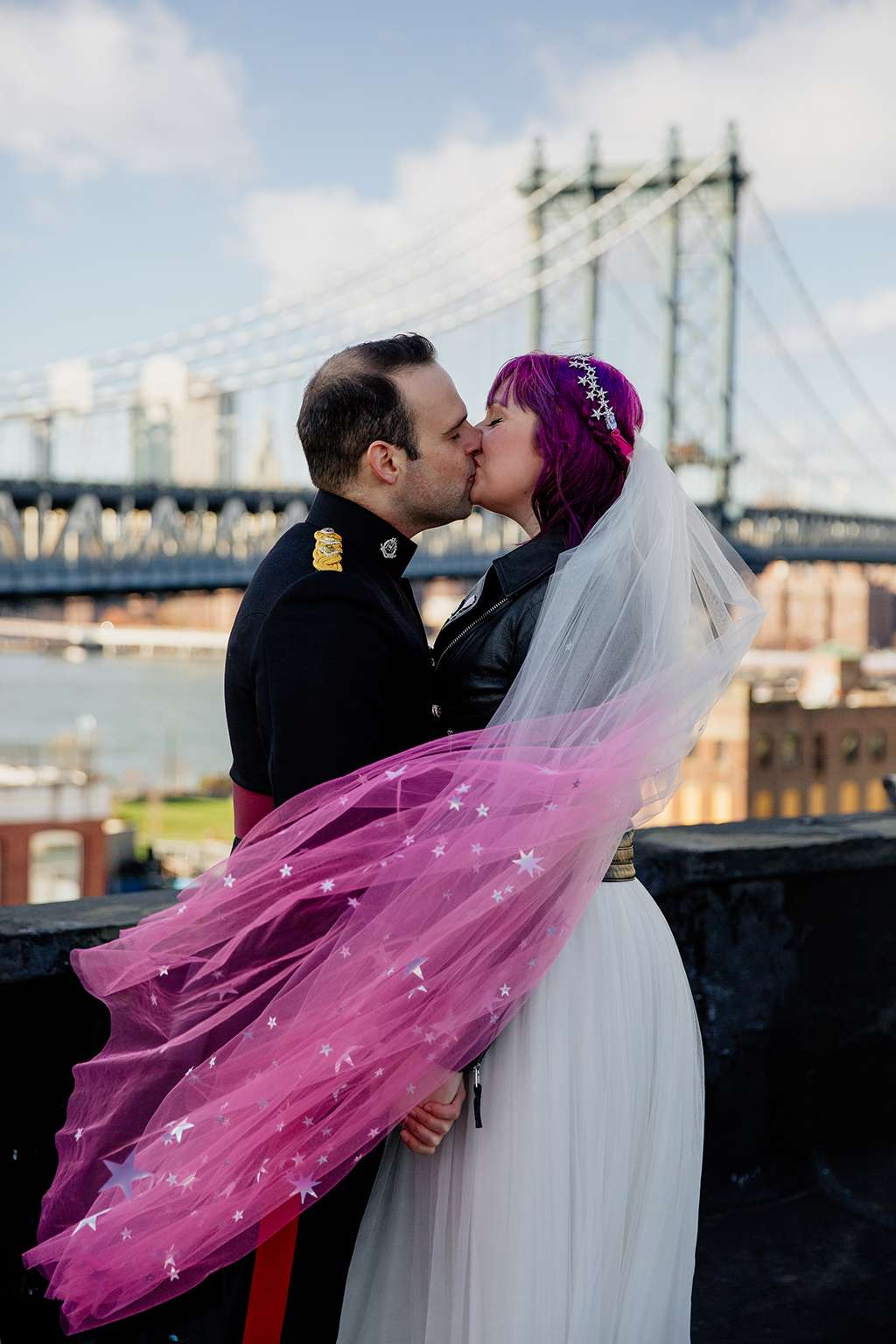 Beth and Dave decided to elope to NYC as they wanted a relaxed and fun day that was filled with all their favourite things! “Dave and I are not very confident people, so the thought of a big ceremony, with all eyes on us and expectations to be a certain way wasn’t something either of us wanted to do,” explained Beth. “We love New York so decided to hotfoot it to our favourite city, ignore the opinions of others and have the day we both wanted!” 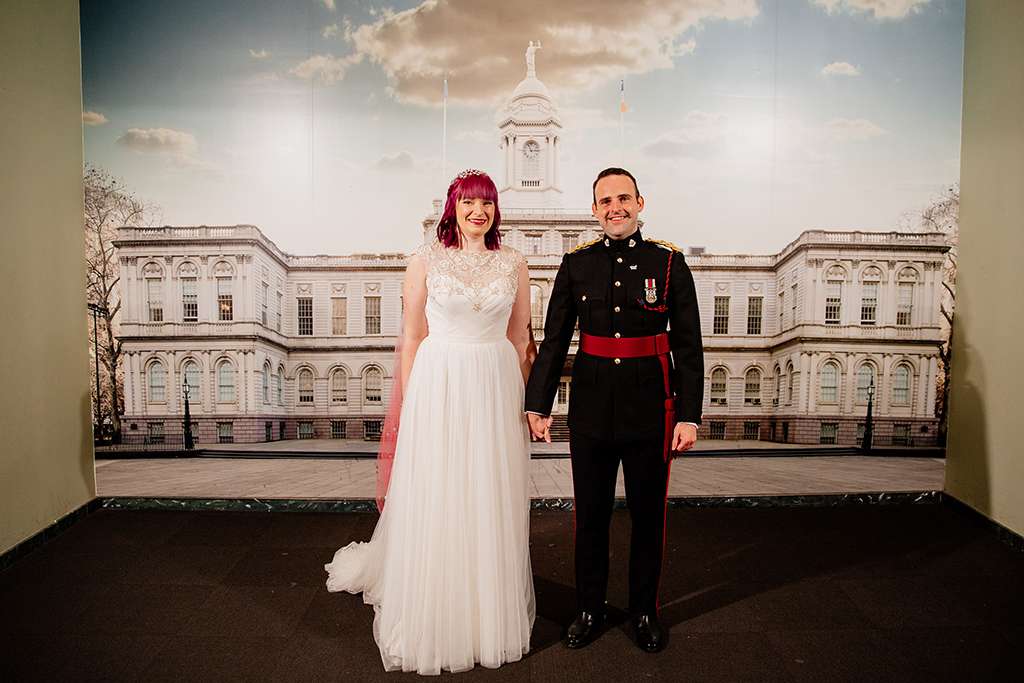 Their elopement shunned tradition from start to finish – they spent the morning together, enjoying some down time drinking coffee and eating cannolis before parting ways to get ready. “It was so nice to share the excitement of the morning together, and also to have some time to relax before the hectic day ahead,” said Beth. “I’ll never forget the way Dave looked at me when we met up to leave for the ceremony!” 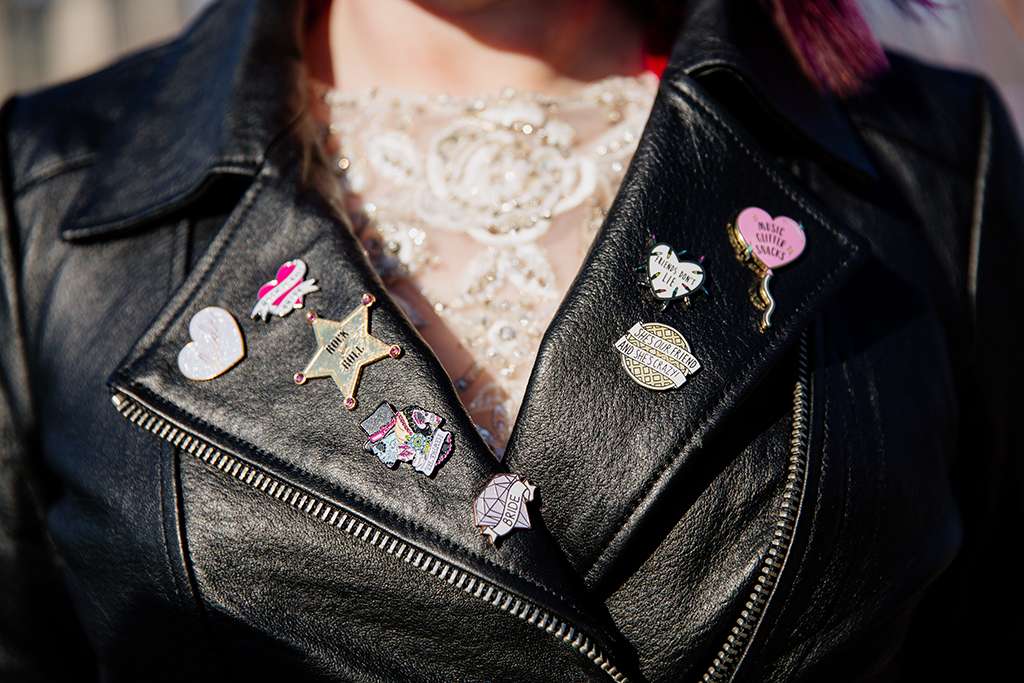 It was important for Beth that, despite her husband wearing full traditional army uniform, she was able to express her personality in her outfit – something she feels is quite unusual for most military brides to do. It was her sense of style, and vibrant purple hair, that first attracted Dave to Beth, after all! She wore a Lilian West dress, with ASOS leather jacket, Crown and Glory x Rock n Roll Bride Nebula Veil in hot pink and a matching Crown and Glory Star Halo Crown. They both rocked Veronica Dearly x Rock n Roll Bride pins. 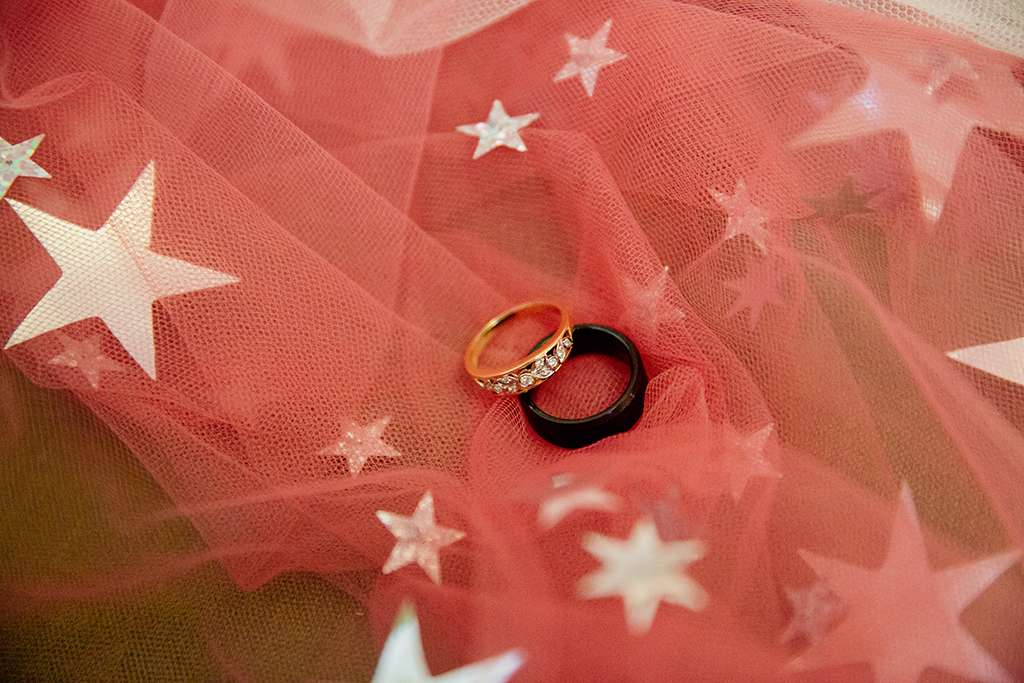 With just Beth’s parents in attendance, the couple headed down to City Hall (not without a quick run back to the hotel for the forgotten rings!), took their number and awaited their turn for their simple ceremony performed by the NYC City clerk. After saying simple vows and exchanging rings, they were married! 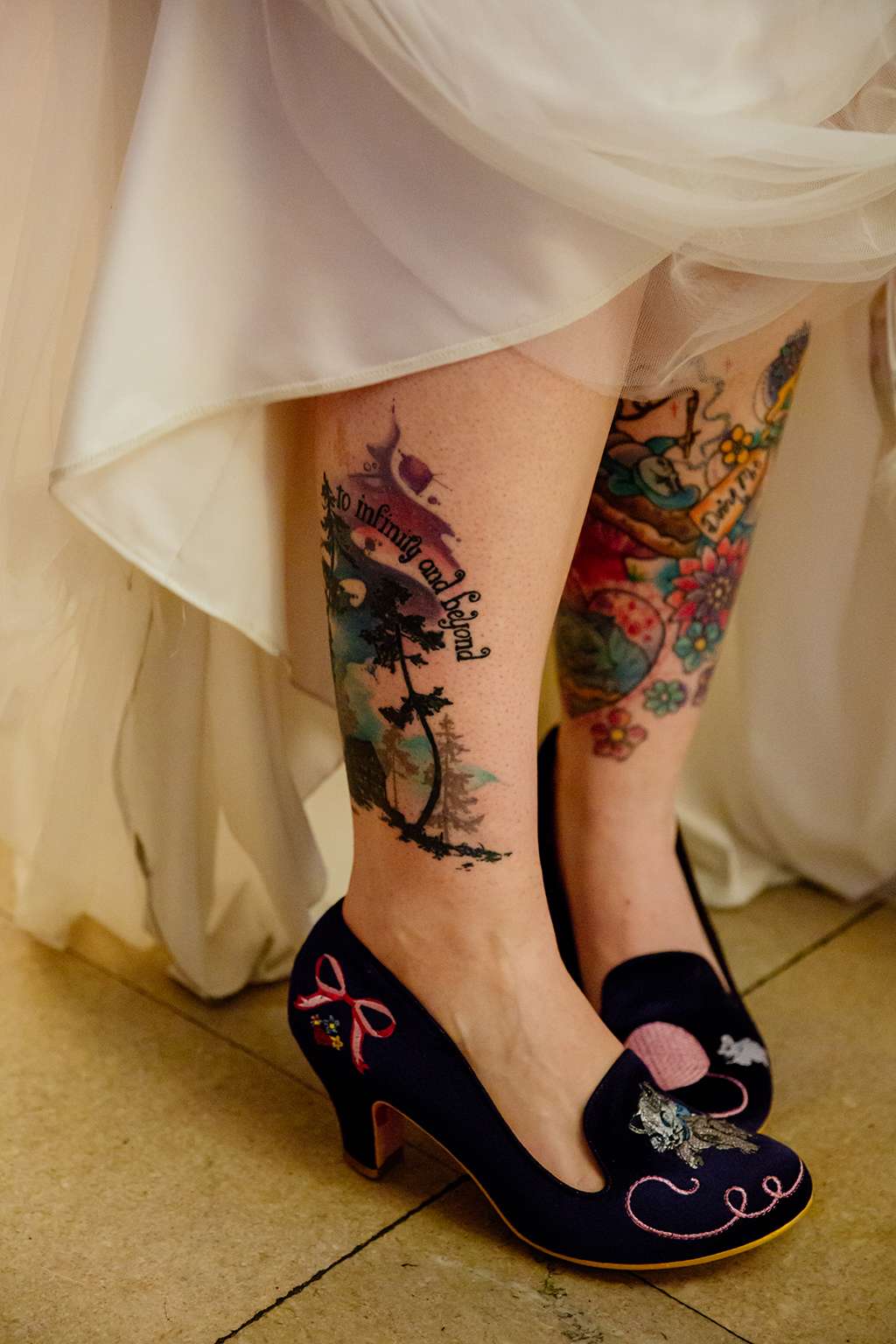 The rest of the day was theirs to do whatever they wanted with, so they headed over to Brooklyn to grab photos before starting the party! They collected their cake from their hotel and went to a whiskey bar to enjoy a not-so traditional wedding breakfast of mulled wine and cocktails, beef-brisket sliders and cake, and talking the night away while watching American football. To finish their first evening as husband and wife, Beth and Dave headed back to their hotel room and danced their first dance alone in front of the floor to ceiling windows with the New York lights twinkling away. 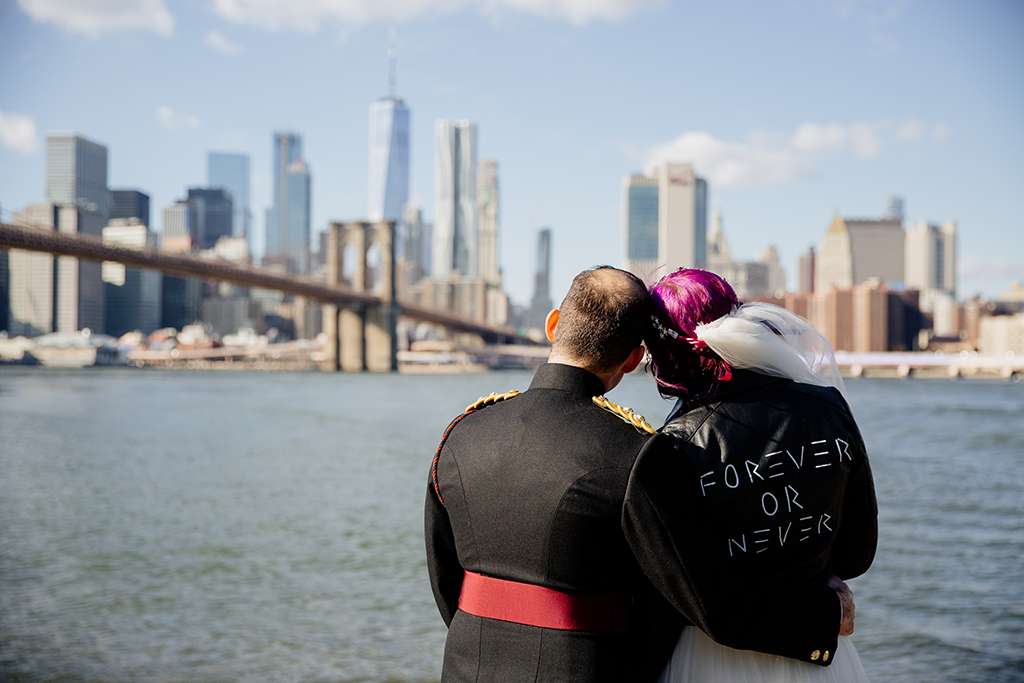 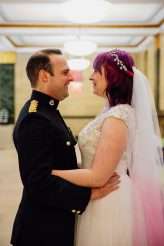 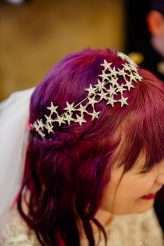 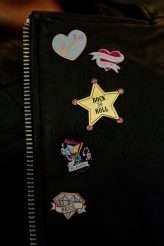 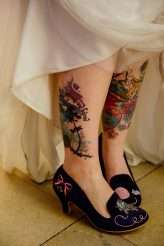 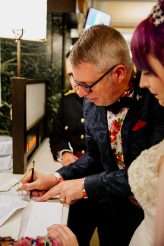 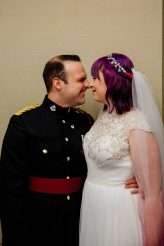 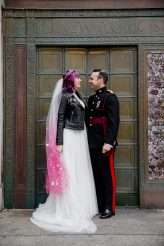 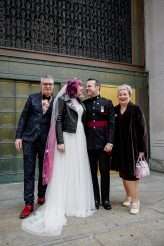 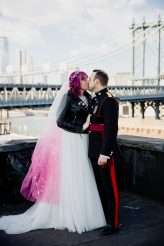 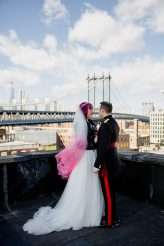 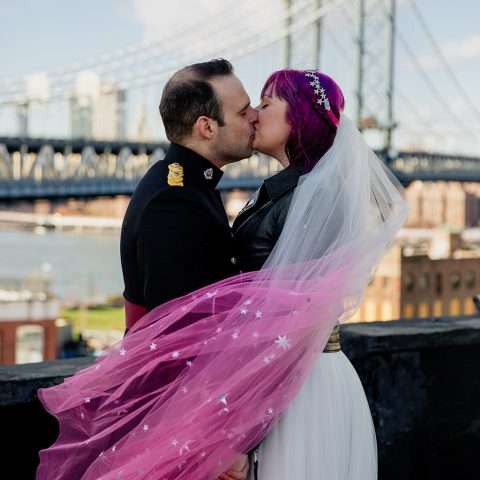 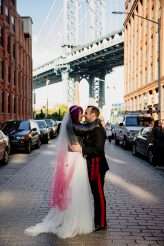 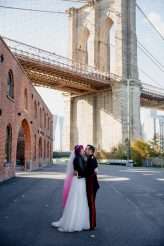 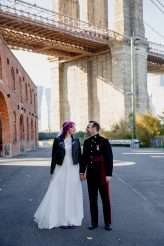