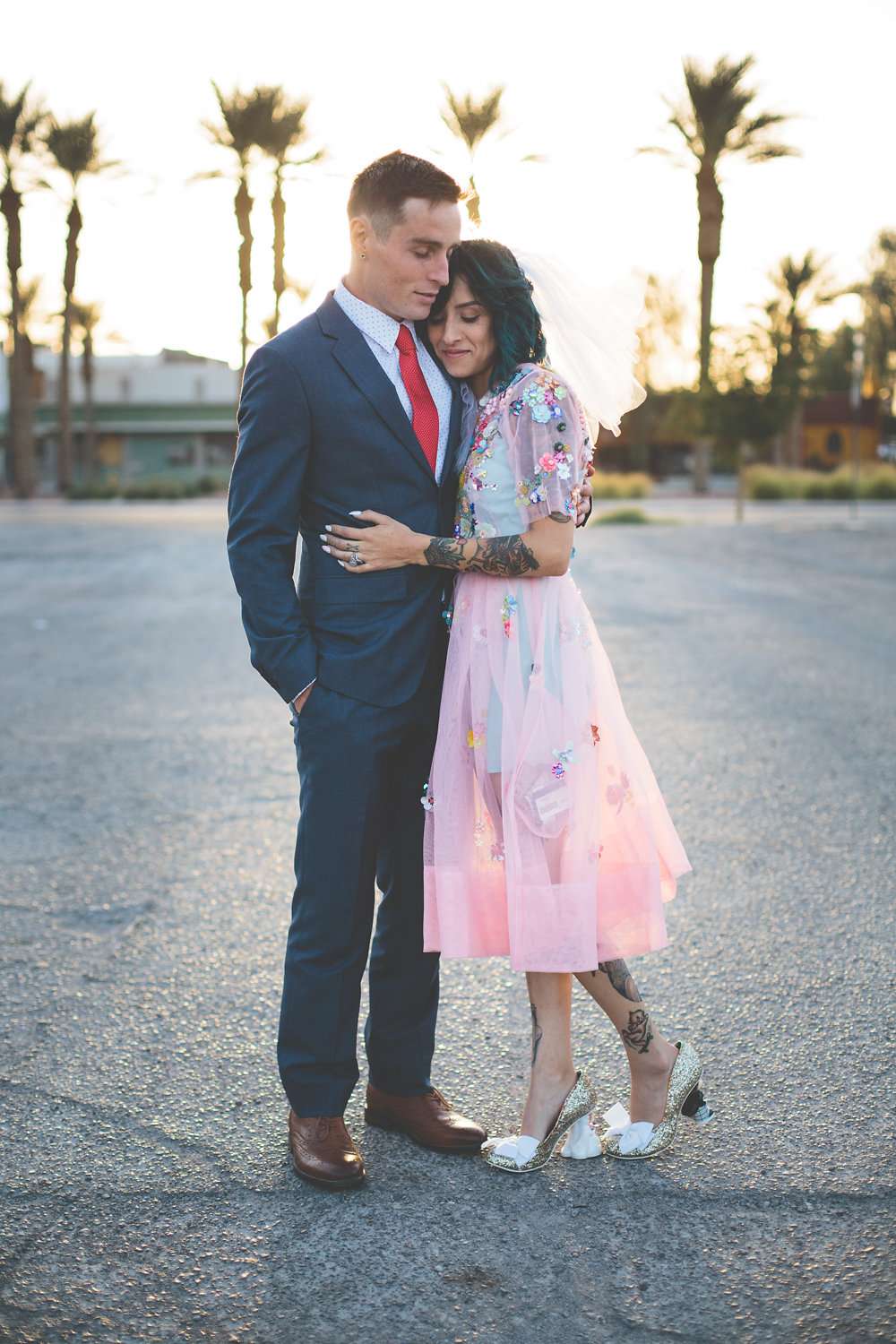 But not just any pink dress, the most gorgeous, unusual thing you’ve ever seen! This bride caused quite a stir when I sneak peeked a shot of her on Instagram and Facebook, with so many of you asking where her outfit was from and  demanding to see more!

I am so excited to share Audri and Cody’s amazing Vegas elopement today. This one might just have become a contender for one of my all time favourite weddings too! 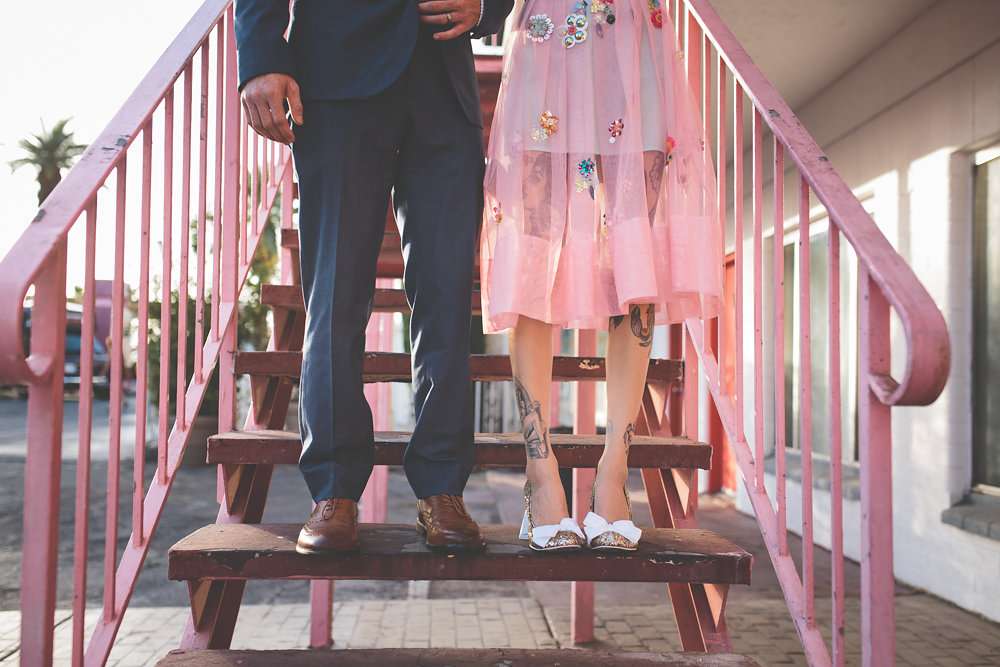 The couple were married at the Little White Wedding Chapel. “Our ceremony was short and sweet with a few of our close family members and friends”, said the bride. “We chose the drive thru option to be seated in there 60s pink Cadillac under the ‘tunnel of love’ that’s painted with baby cherubs hidden in clouds in a starry night sky scene!”

“We wanted our wedding to look unique, and to have a sort of dreamy feel to our photos. We just wanted to have fun and look back at our pictures with our son and that he’d think we were pretty cool! For the actual vibe of the wedding and our photos we got a LOT of ideas from another couple that was featured on Rock n Roll Bride – Ainsley and Sebastian! Their whole look was everything!” 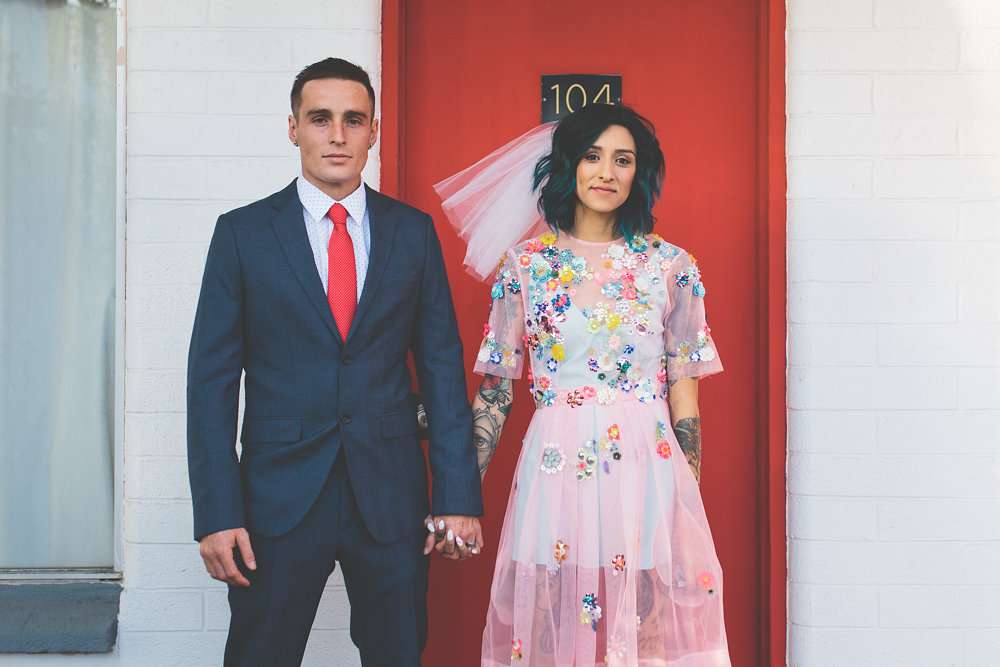 OK let’s talk about Audri’s amazing outfit shall we? “I had tons of photos of Cher, Rupaul and few other beauty queens saved for my outfit inspiration”, she said. “My veil was handmade by Betty’s Girl Boutique in Napa, Ca. I stumbled upon my dress on ASOS and totally fell in love! However it was sold out so I emailed the site as well as stalked and refreshed the page everyday for about two and a half weeks before it suddenly appeared again! It was a size bigger than I am but I was not going to chance it so I bought it and had it altered. My shoes were Irregular Choice.” 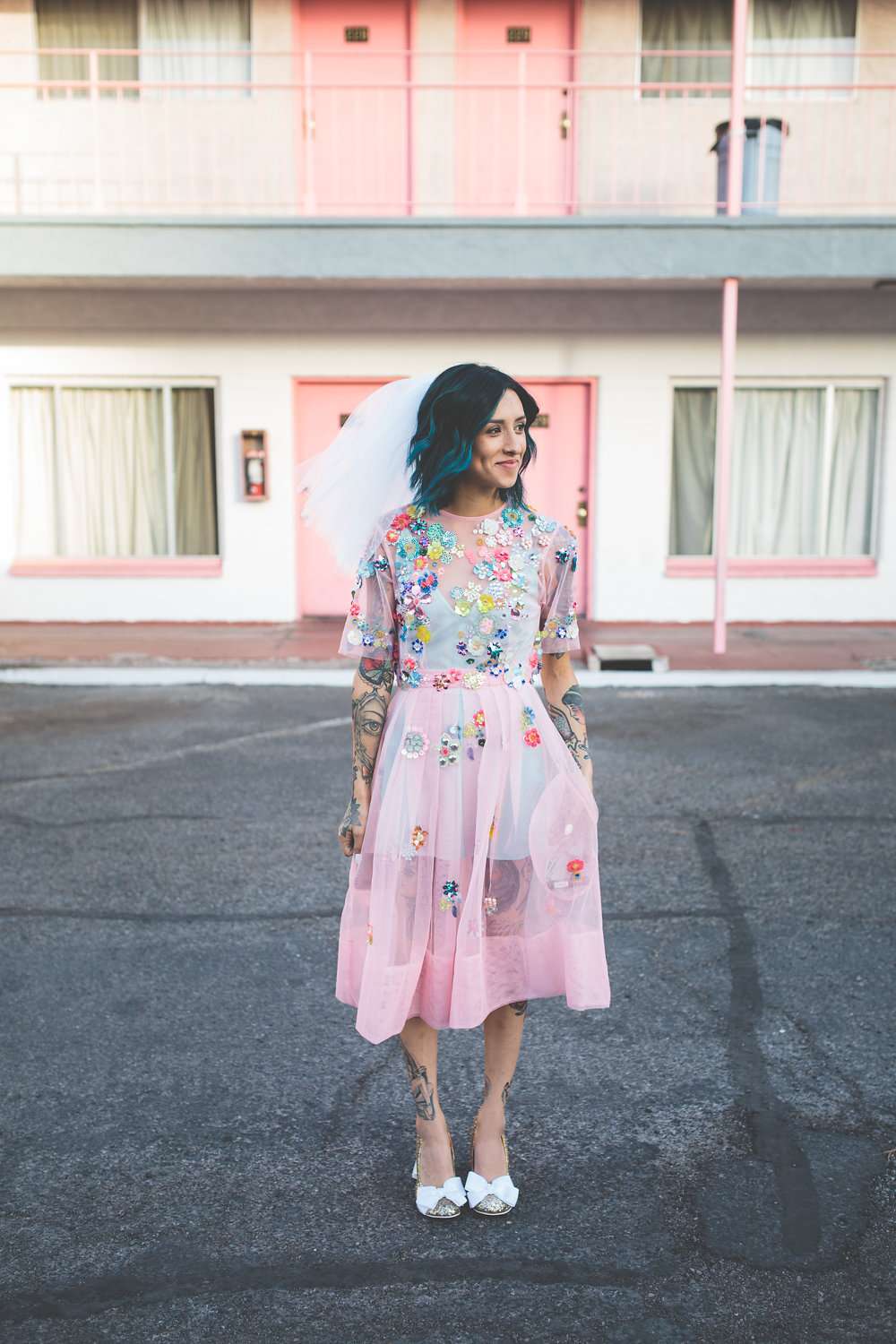 Since they eloped, they didn’t really have a reception. “We just went to a random sushi spot in Vegas for dinner and then danced the night away with a few friends. When we first mentioned doing this we hadn’t really expected anyone to come with us. Even though we were engaged for three years, we organised it very quickly and winged a lot of it!”

The couple spend around $1000 on the wedding which covered the ceremony, the meal afterwards, their photographer and their outfits. “We drove to Las Vegas from our home, in Napa Valley, California”, she explained. “My husband wanted to drive so I was down since I haven’t ever been on a drive like that before!” 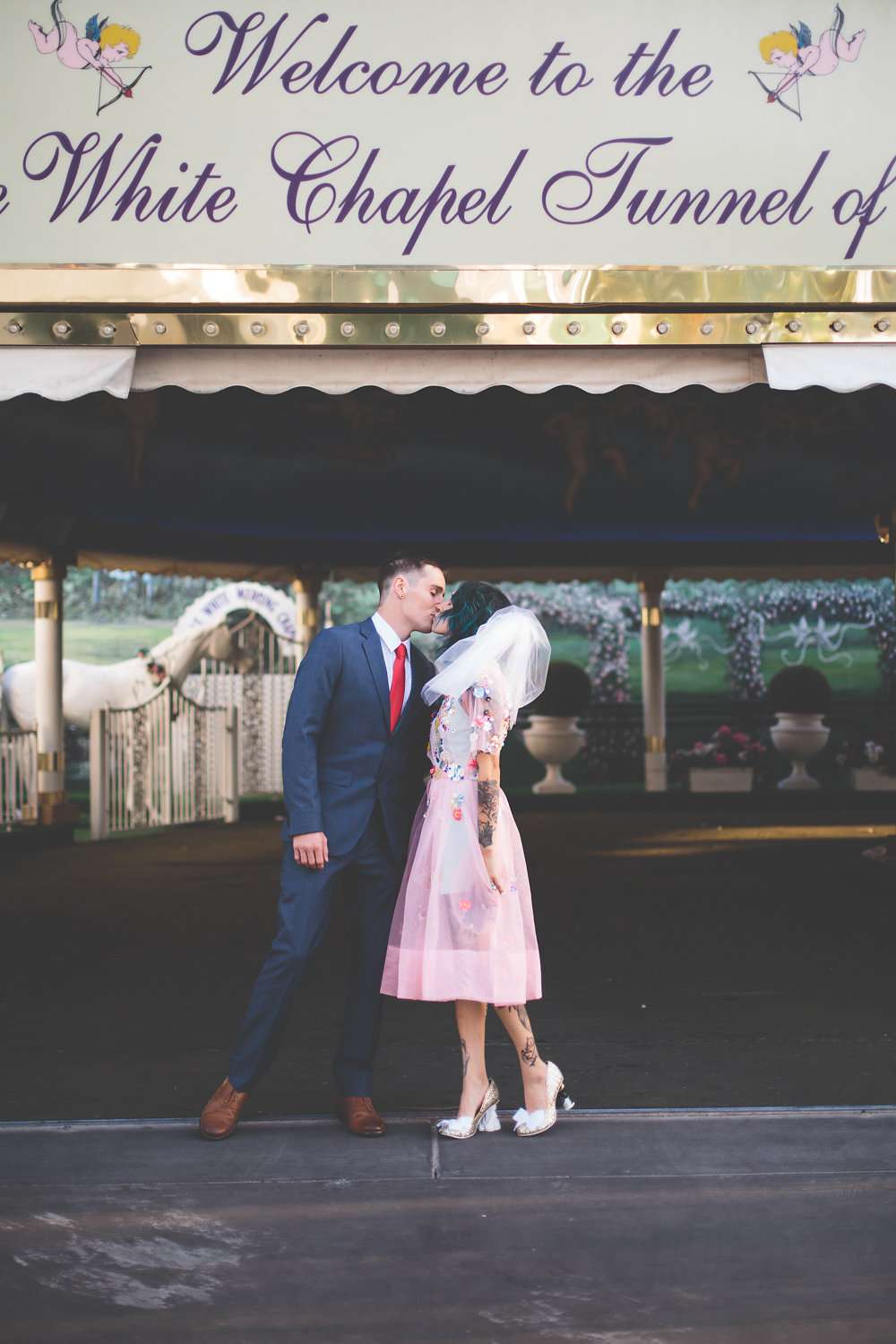 “Our biggest expense would probably have been my outfit. After that would be photography but we had to get a great photographer! We just booked her for a few hours to save money but these pictures are seriously more than I could have ever imagined. They turned out so great and the cost was worth it to have them for the rest of our lives.”

“There is nothing we’d do differently other than I wish our son was there with us, but at the same time we’re the type of parents that like to do things without our kid there! It was nice just to focus on us for such an intimate moment. We actually were so homesick and missed him so much we came home a day early and spent the afternoon just relaxing at home.” 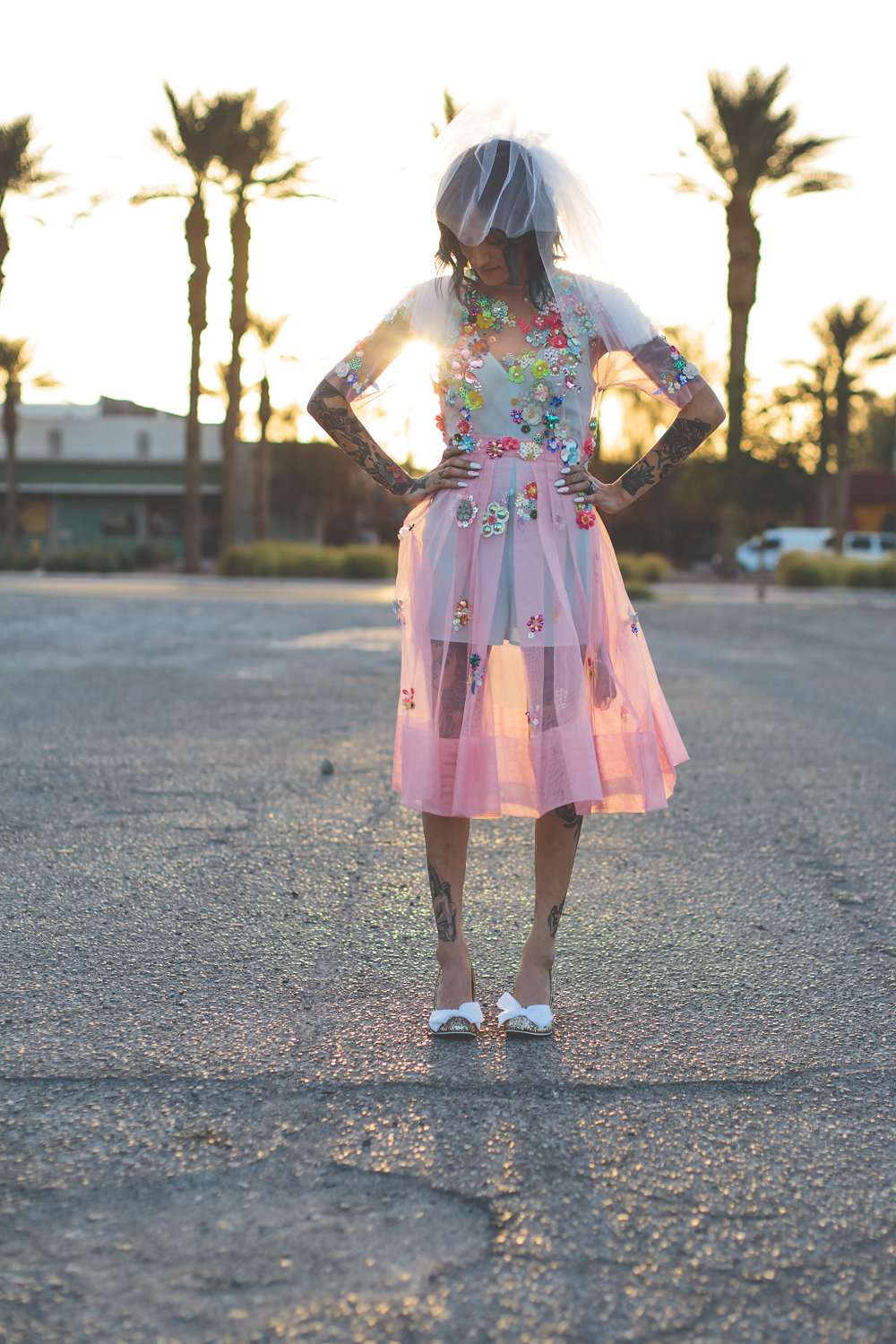 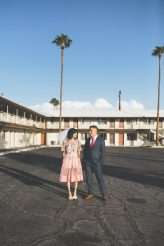 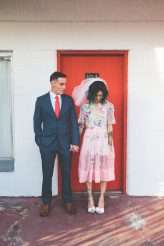 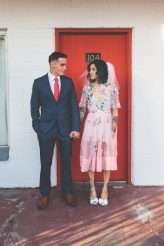 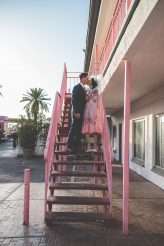 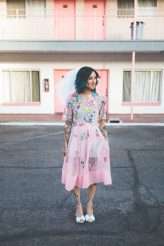 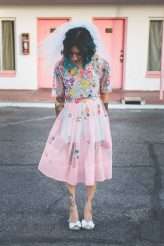 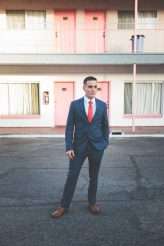 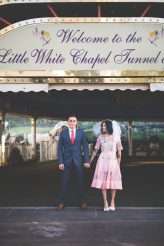 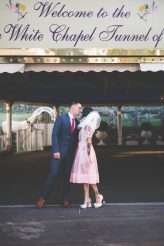 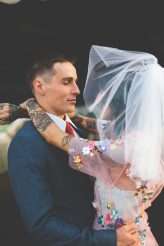 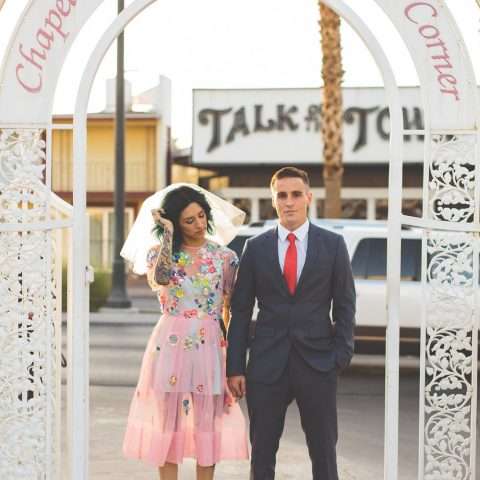 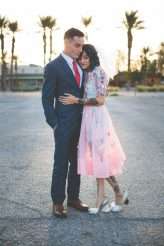 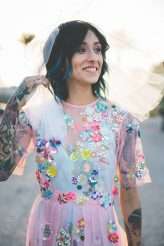 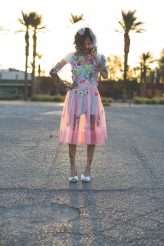 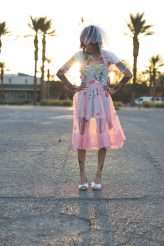 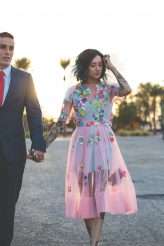 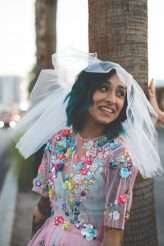 Dry Lake Bed Elopement with the Bride in Pink

If you look up Rock n Roll in the encyclopaedia of life, you might just find a picture of this couple and their wedding. Eloping to Las Vegas from Australia, and donning a bubblegum pink dress and a sharp suit, Amie and Ben said their 'I dos' on a dry lake bed, before eating at a burger joint and finally heading off to get tattoos. Romantic, sexy and effortlessly cool, or what?

When Jorden and Greg decided to marry, they knew Las Vegas was the perfect place for them. They wanted a day with a glamorous grunge vibe, but with a touch of kitsch. Their ceremony was at The Little Vegas Chapel and they were married by (who else?) Elvis!