When Jessica tagged me on Instagram in a photo of her rocking her Liberace kitty ears on her wedding day, I genuinely couldn’t wait to see the rest… and when she then told me the wedding had a subtle cat theme I was even more excited!

“I would call our wedding a strange mix of themes, none of which would appear to make sense in a list, but all of which melted together to be very ‘us’,” she explained. “The location, an old iron foundry, had a very industrial feel that appealed to the groom’s interest in NYC history, while the ivy-covered walls inspired the greenery-centric style of the invitations, signage, and bridesmaid styling.” 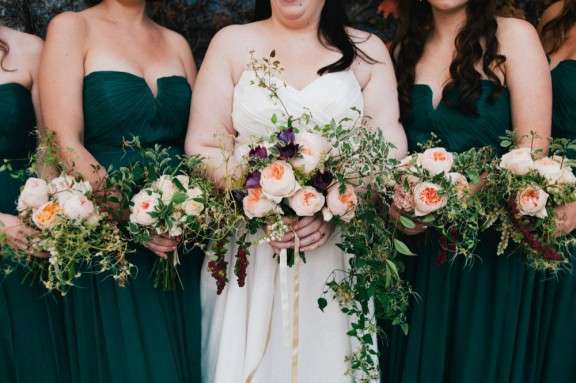 “The cat theme came about because we wanted our two cats to be present in some way, and we looked for ways to incorporate small references to them. Each cocktail was named for a cat, custom kitty face stickers were on all the favor packages, and the sparkly cat ears worn by the bride (from the Rock n Roll Bride for Crown and Glory collection of course!) was a really fun touch.”

“The photobooth, complete with an array of masks and props to chose from, added a weird little nod to Halloween”, she continued. “Ultimately we wanted it to be fun and welcoming, and we tried to make deliberate choices about things we liked and wanted to include, instead of going off of a generic checklist for what we ‘needed’.” 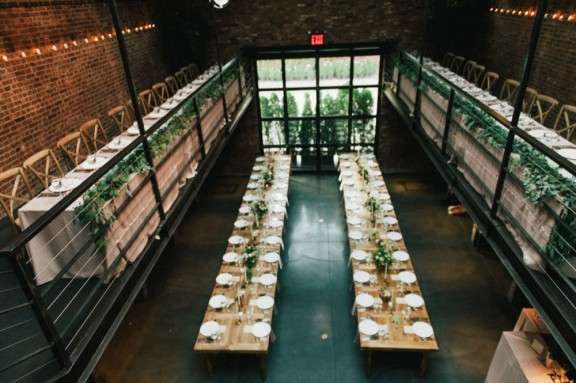 “The majority of the bill was catering. We did welcome drinks, and champagne right after the ceremony, and a cocktail hour and family-style dinner with some really fantastic seasonal food. We didn’t want to do a hors d’oeuvres-only wedding, because the older contingent of family would have been very put off by it. Our caterer recommended a family-style dinner, both because it reduces staffing costs and because it’s a bit more social than some buffets – it gets people talking and passing platters. The caterer, Laura DeRemer from Radish NYC, was so amazing and filled in the gap where I would have needed a wedding planner. She helped with scheduling and planning, and even arranged for a vegan Yodel™-type Groom’s Cake for guests with allergies (and a lactose-intolerant groom), so everyone could partake.” 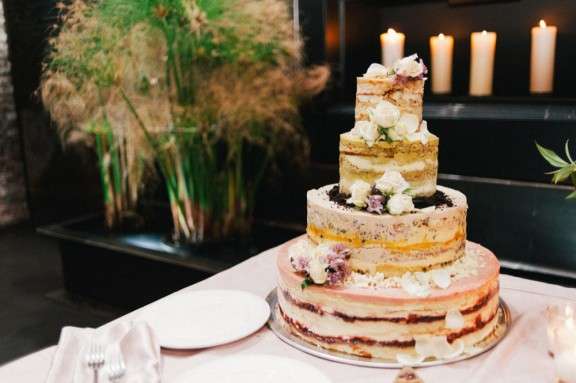 “The biggest splurge was definitely the venue, and the rental of chairs, tables, dishes, and etc. to furnish the space. We didn’t want to have a wedding at a ‘wedding mill’, and when we visited at The Foundry, we knew we had found the right location. The building itself is very industrial in style, yet you customize all your vendors and rentals so it feels very personal. It doesn’t take much to make the space look incredibly beautiful, between the industrial details and the ivy growing up the walls both inside and out. A little candlelight, some truly beautiful flowers, and a few small touches turned The Foundry into this ethereal wonderland.” 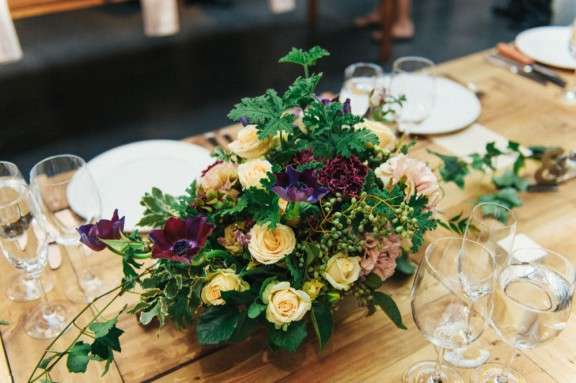 “My advice to others planning a wedding would be to talk to people; ask if they know any great vendors. I found the most talented photographer because I struck up a conversation with the woman who sat next to me at my new job. Also, when people advise that the biggest way to reduce costs across the board is to reduce your guest list, they’re really not kidding. Not one other thing makes slightly as much of a dent. We had 80 people in total, and it felt like a lot, but there was nobody unimportant to us there on that day.”

“On a practical note, if you’re planning to do any of the printed stuff yourself, get yourself a paper cutter. Cutting one item with straight lines is easy, but it’s much more consistent to do hundreds of items with a tool made specifically for that purpose” 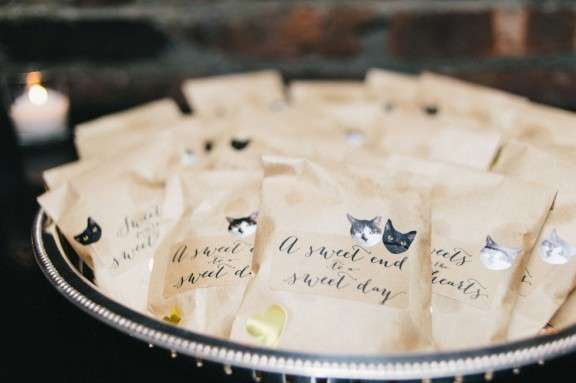 “Finally, don’t do anything just because someone says, ‘but you have to have [X]!'” she concluded. “You really don’t have to have anything but your significant other; everything else is up for debate. Everyone will have ideas on what you should do, but it’s your wedding. Don’t let anyone else run amok with it or pressure you into anything you don’t care about. Don’t do something just because it looks amazing on Pinterest. Make it special to the both of you, even if it’s a combination of seemingly unrelated things. If it’s meaningless, your heart won’t be in it and the process will feel more arduous than it would anyway.” 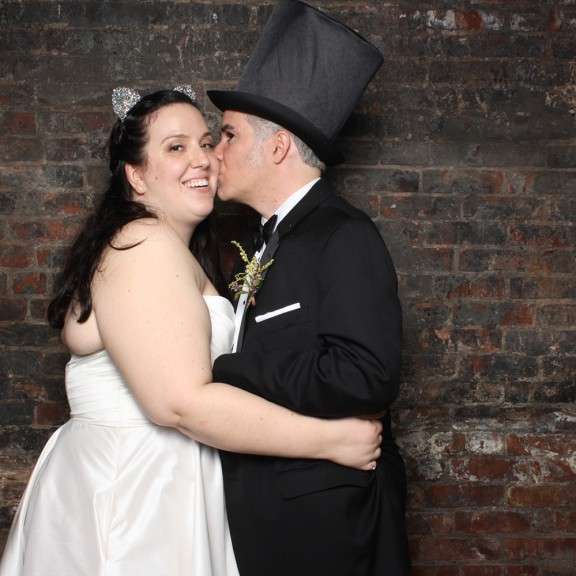 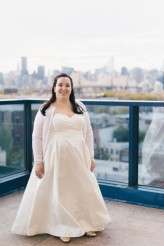 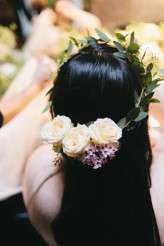 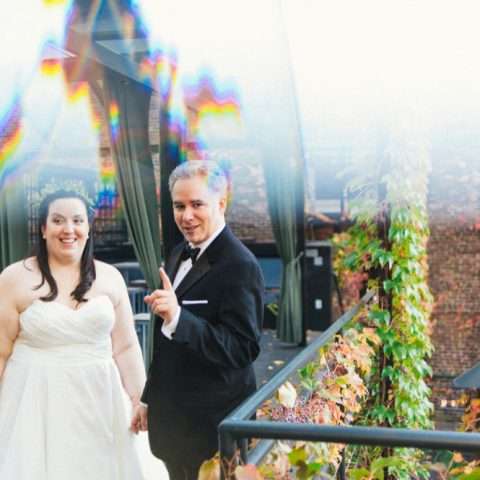 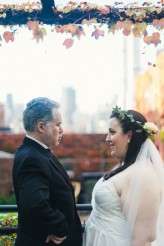 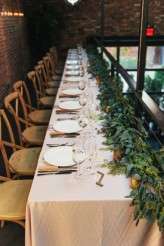 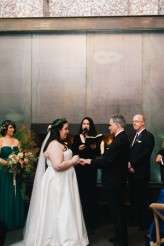 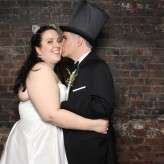 If a simple, emotional and beautiful wedding is what you're after, then let me introduce you to Pieter and Noortje. Married in the Botanical Gardens in Nijmegen, The Netherlands, their wedding had a natural, organic and bohemian vibe. Their reception was held at De Waard van Kekerdom, a bar in Kekerdom, where they had a simple meal followed by an after party!

Christina and Geoff wanted their wedding to be relaxed and intimate. They were married in October in West Shokan, New York. "Our theme was a rustic, woodland wedding that celebrated our love for the outdoors and natural world," said the bride. "We also wanted to have our personalities and the things we love be the focus."

Lily and Lance's March wedding was inspired by their one big love - Star Wars!