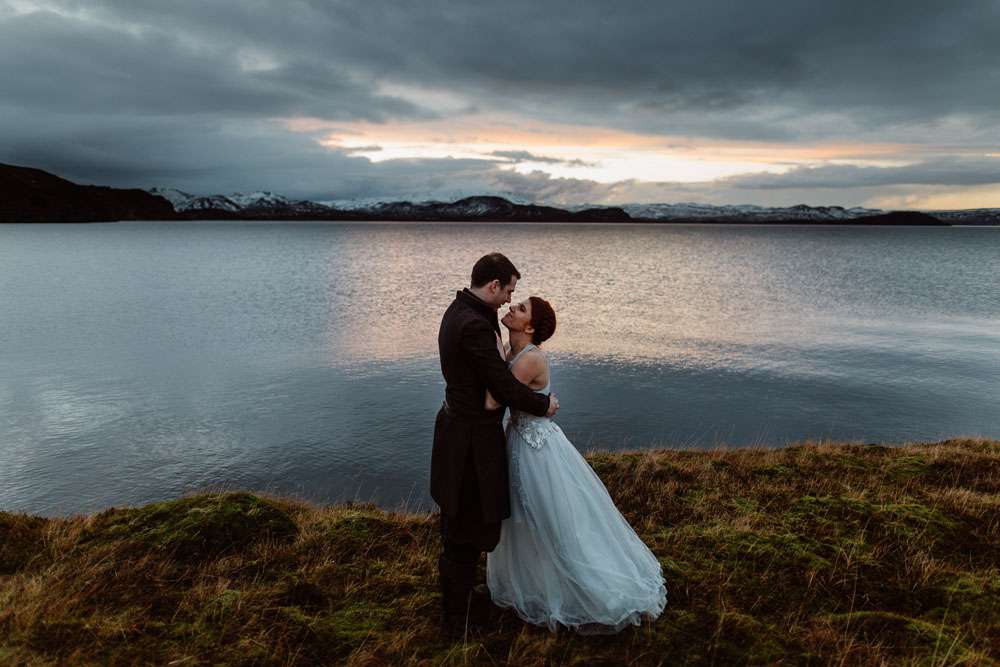 Italian Monica and British Ben absolutely adore Game of Thrones so when they came to marry there was only one place they wanted to do it – Iceland! Their ceremony was held in Thingvellir National Park, at the Silfra (the rift between two continental tectonic plates) which is actually the entrance to the Eyrie in the show. 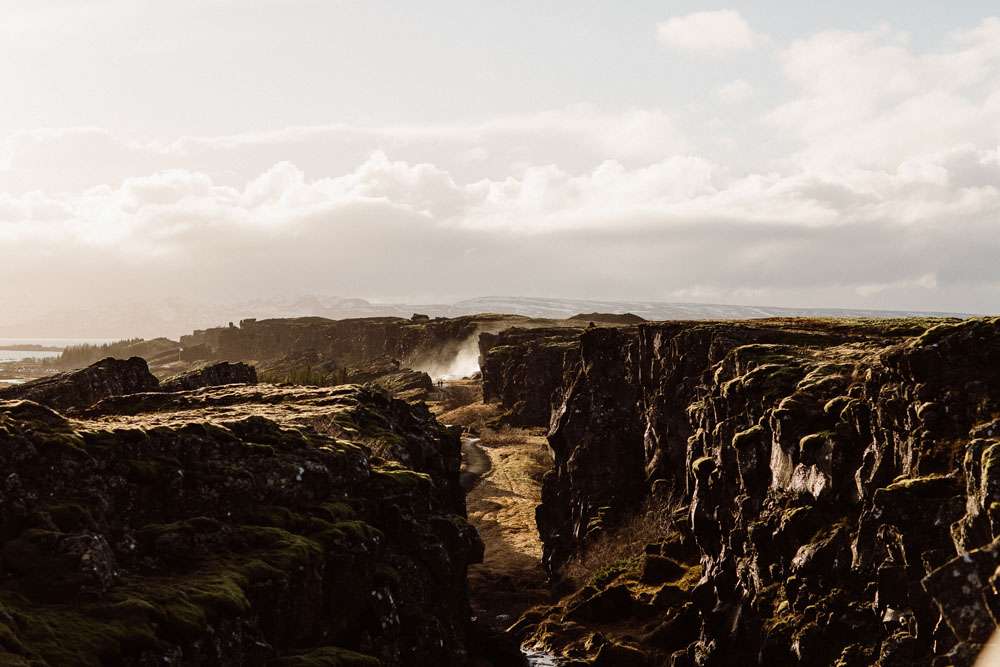 “We are both fans of Game of Thrones and very much into fantasy”, Monica explained. “In fact we are so much into Game of Thrones that 1) Our two cats are called Tyrion and Shae 2)  Our first trip to Iceland was a GoT tour in the northern part of the country and 3) Ben proposed to me there, near a frozen lake surrounded by ravens. This made Iceland very special to us and the perfect setting for our wedding. We also appreciate the liberal nature of Icelanders, and their open-minded view of love and marriage.” 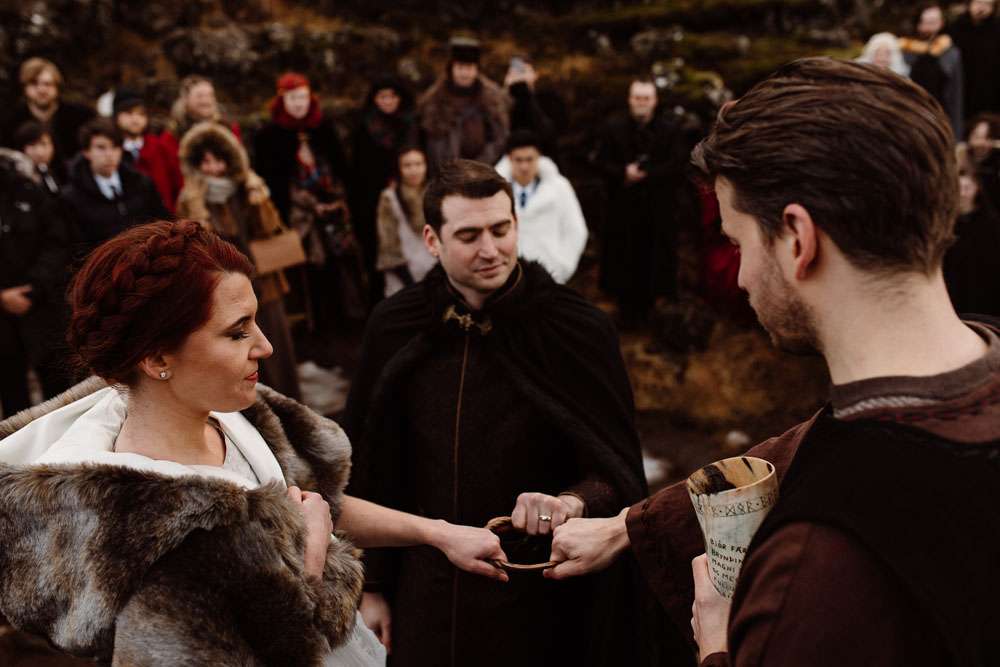 “Most of our friends and family dressed up in medieval-style outfits! The fantasy/Game of Thrones came to life so well in Iceland, with stark landscapes, waterfalls and snow, and I am very glad that we decided to be bold and brave the elements by having the ceremony outside.” 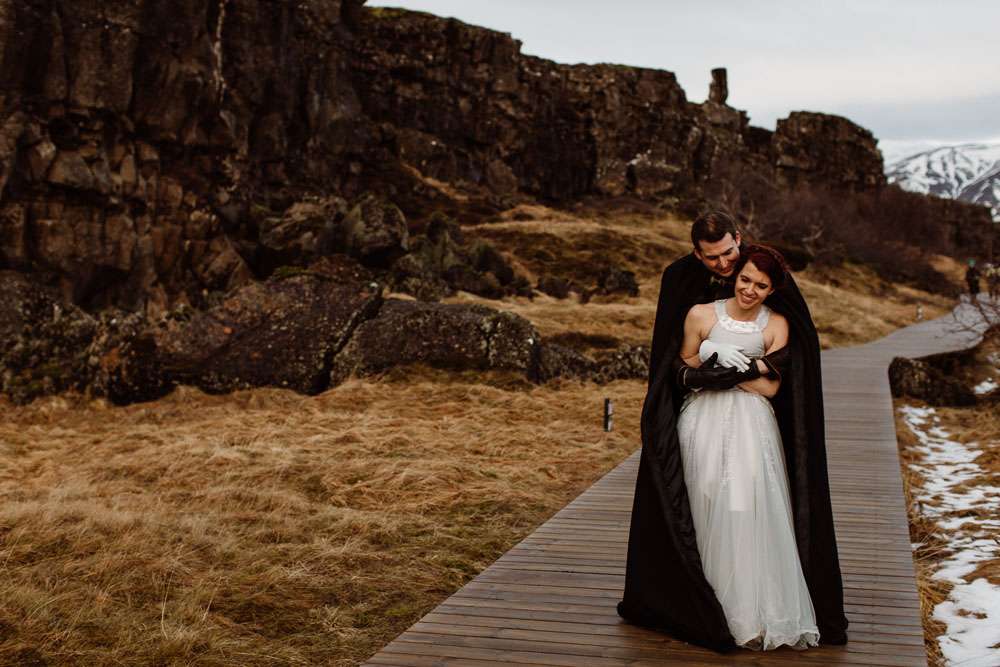 “We chose to have a pagan ceremony officiated by a Nordic chieftain (Ben and I are both atheists, and identify instead with the principles on which heathen customs are based: Tolerance, honesty, honour and respect for the ancient cultural heritage and nature). As part of the heathen ceremony, an oath stone and drinking horn are used. The drinking horn was filled with a drink of our choice… Which was beer! Each guest had to drink from the horn after saying some congratulatory words at the end of the ceremony. All of this fitted perfectly with our theme as you can imagine!” 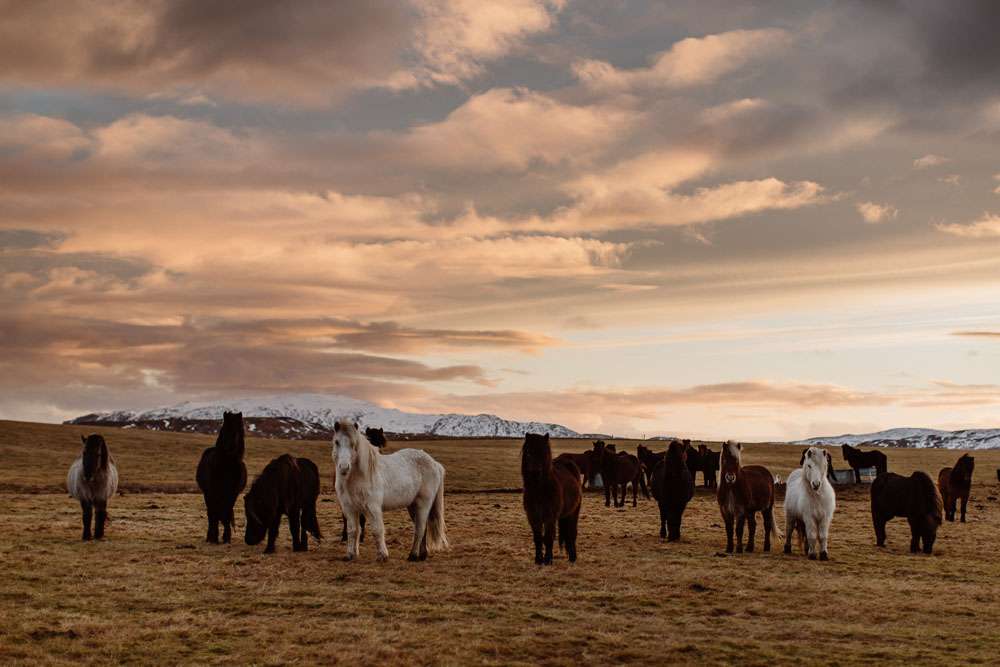 “We recited our vows in unison. It was very important to us to have everything in the wedding very equal and gender-neutral. The vows were also embroidered on my wedding gown.”

The bride had her dress made for her by Rosie Red Corsetry and Couture, who also made the groom’s cape!. “I saw Rosie Red’s first collection at Oxford Fashion Week in 2015 and immediately fell in love with her style. I then knew she would be the perfect designer for my dress. Not only she specialises in fantasy bridal wear, but she also makes a point of designing dresses for all body types. I love her philosophy that ‘every body deserves to be beautiful’. I am very petite and she made me feel so confident with a bespoke dress that fitted me beautifully. She made the dress totally unique by embroidering the wedding vows into my gown. The gown was soft shades of silver and grey, with ethical leather accents to match the underbust corset (featuring ‘dragon scales’).” 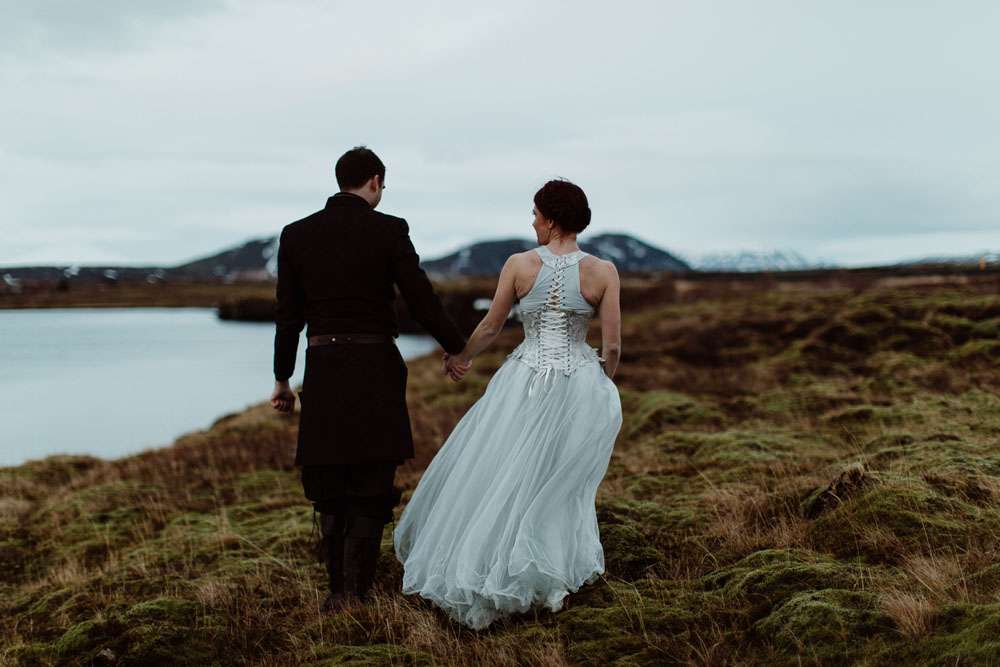 Their reception was held at Ingólfsskáli Lodge, also in Thingvellir National Park. “We had a medieval-style dinner with pelts on the table, medieval cutlery and table accessories, and a Westeros seating chart”, she continued. “I used personalised Game of Thrones candles as wedding favours and these were also on the tables. Horn shot glasses were used for the initial toast.” 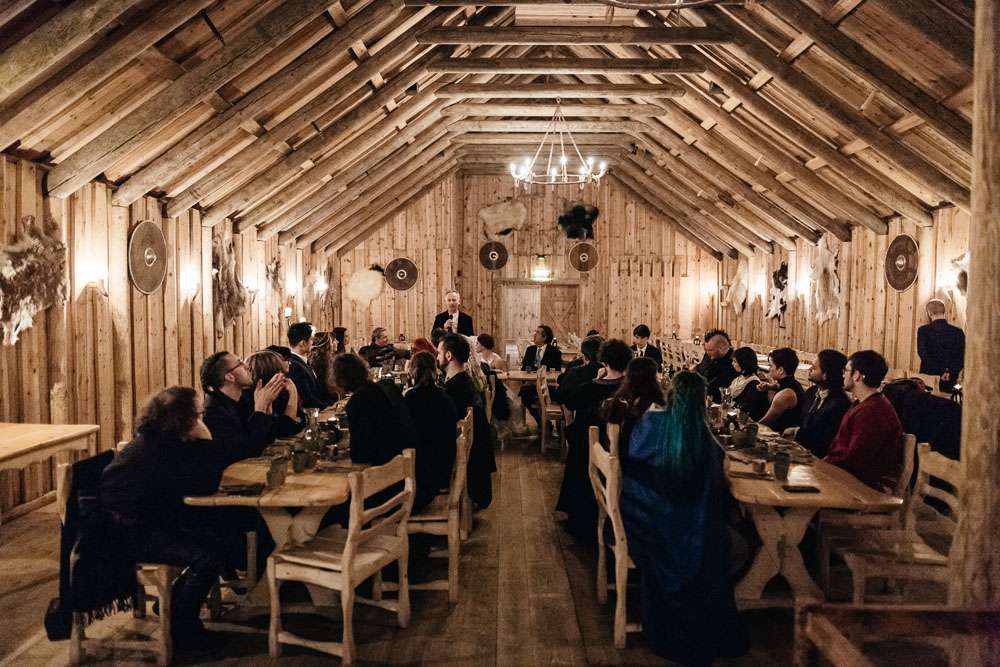 “We had a fairly intimate wedding, 33 guests”, she explained, “but the reception turned out to be the priciest item on our list. Probably the adverse exchange rate and the fact the pound slumped so low against the Icelandic krona in the past year didn’t help.” 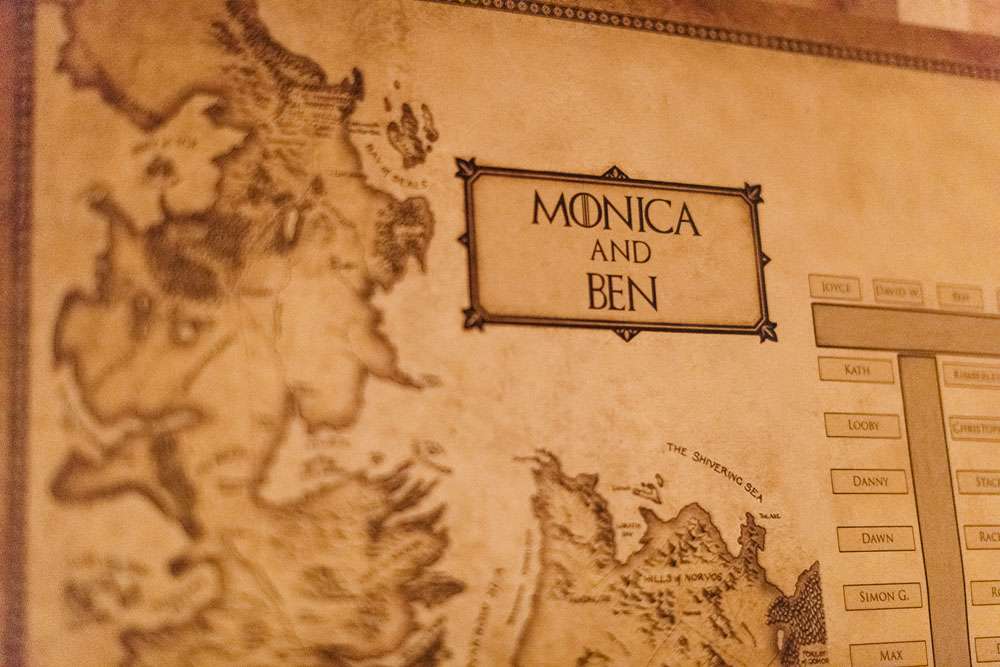 “We found wedding planning so much fun”, she concluded. “We loved making all the details ours. I had the best time making everything fit into our Game of Thrones theme. The invitations featured ravens and a dire wolf, we had a Westeros seating chart, and I used personalised candles as wedding favours. The corset on my dress had ‘dragon scales’ on it and the wedding cake had to be a dragon cake, of course!” 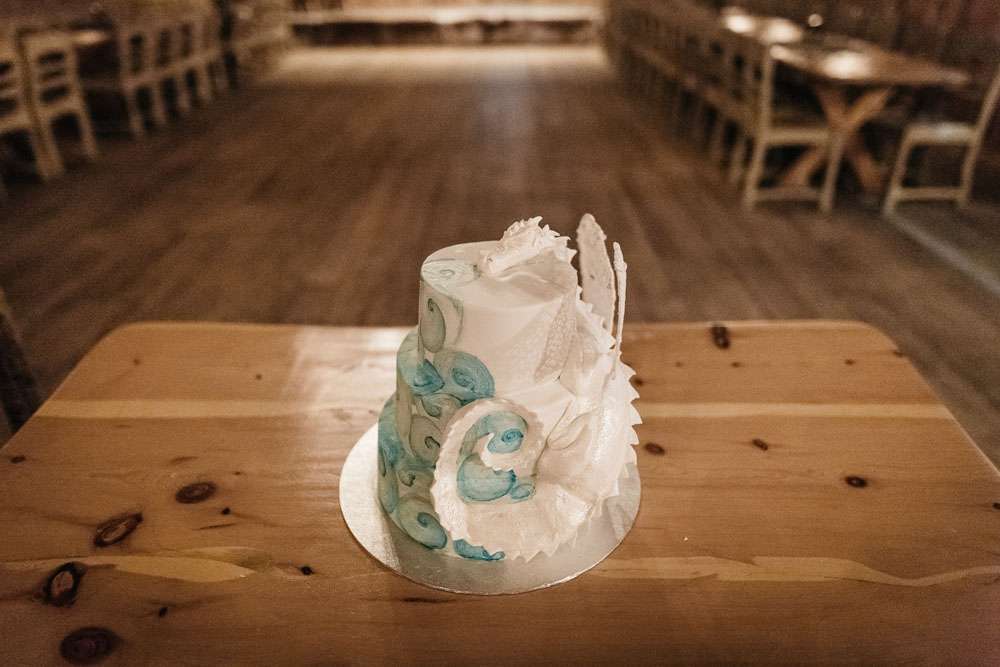 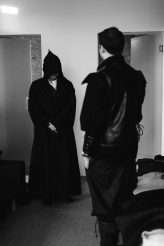 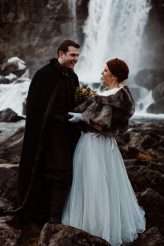 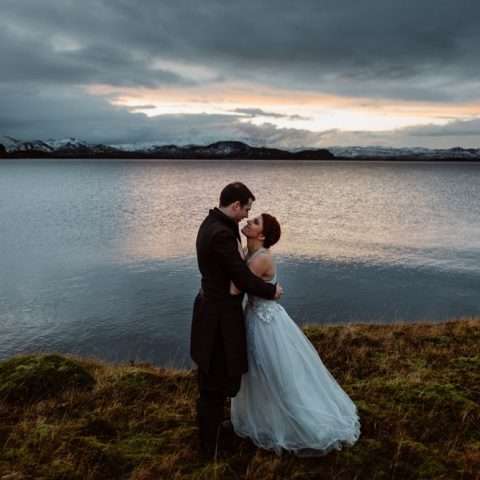 Lina and Karl's Swedish wedding was inspired by Grimm's fairytales and the darker side of fantasy.

Game of Thrones and Lord of the Rings Inspired Castle Wedding

Kat and Matt wanted anything but a traditional wedding. They started the day by having their ceremony at Old Wardour Castle in Salisbury. "The inspiration for the wedding was everything we enjoy: computer games, Game of Thrones, Lord of the Rings, swords, horses, cats, dragons and castles!", said the bride. "We love looking around castles and historical sites, so finding a ruined castle licensed for weddings was amazingly perfect!"