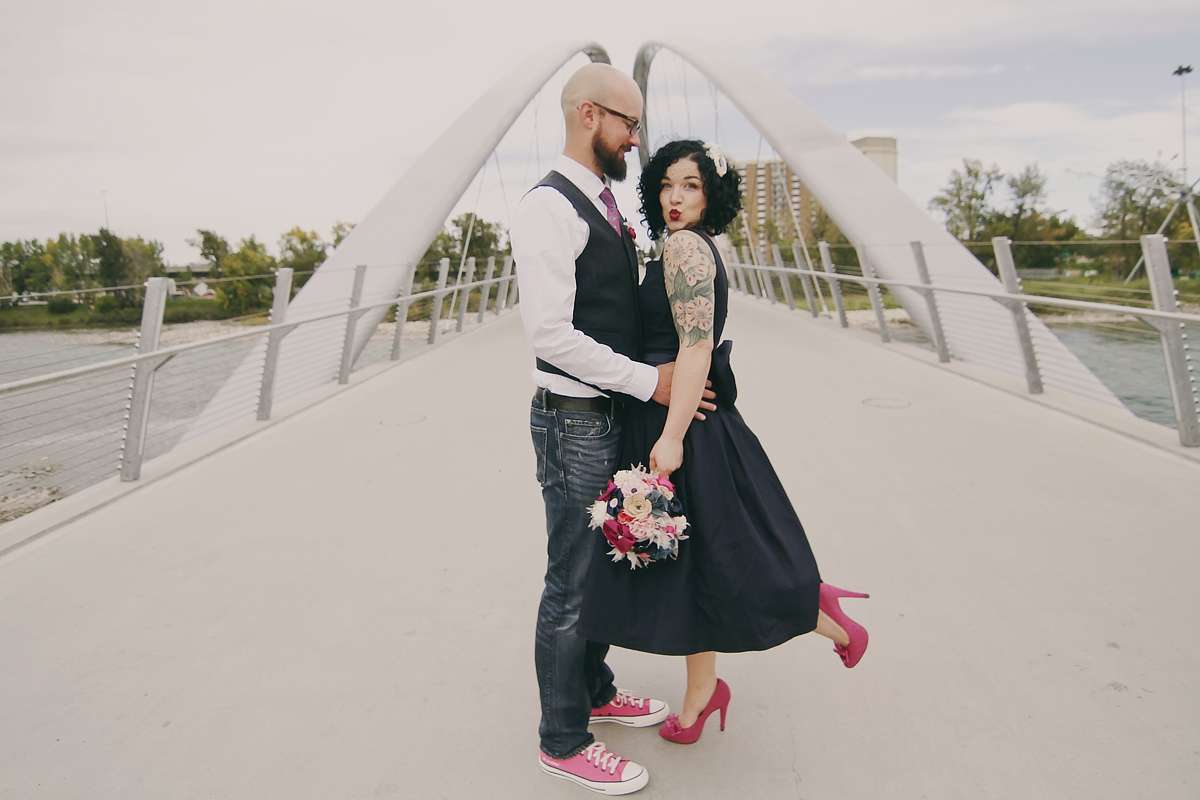 Allison and Brad described their wedding theme as ‘eclectic, vintage and fun’ with a focus on DIY. Most of their wedding elements were crafted, borrowed, gifted, or thrifted, which added to the vintage feel. They originally chose hot pink for their colour scheme (Brad’s favourite colour), but then decided to have ALL the pinks, plus neutrals, navy blues and midnight blues.

They also wanted to honour Allison’s late mother in as many ways as possible, “Much of the inspiration came from trying to honour my late mother, who died in 2009, only four months before Brad and I met. From her old buttons that I used to make the boutonnieres and bouquets, to the brass candlesticks like the ones she used to collect, to sewing her old heart-shaped locket onto the lining of my dress over my heart.” 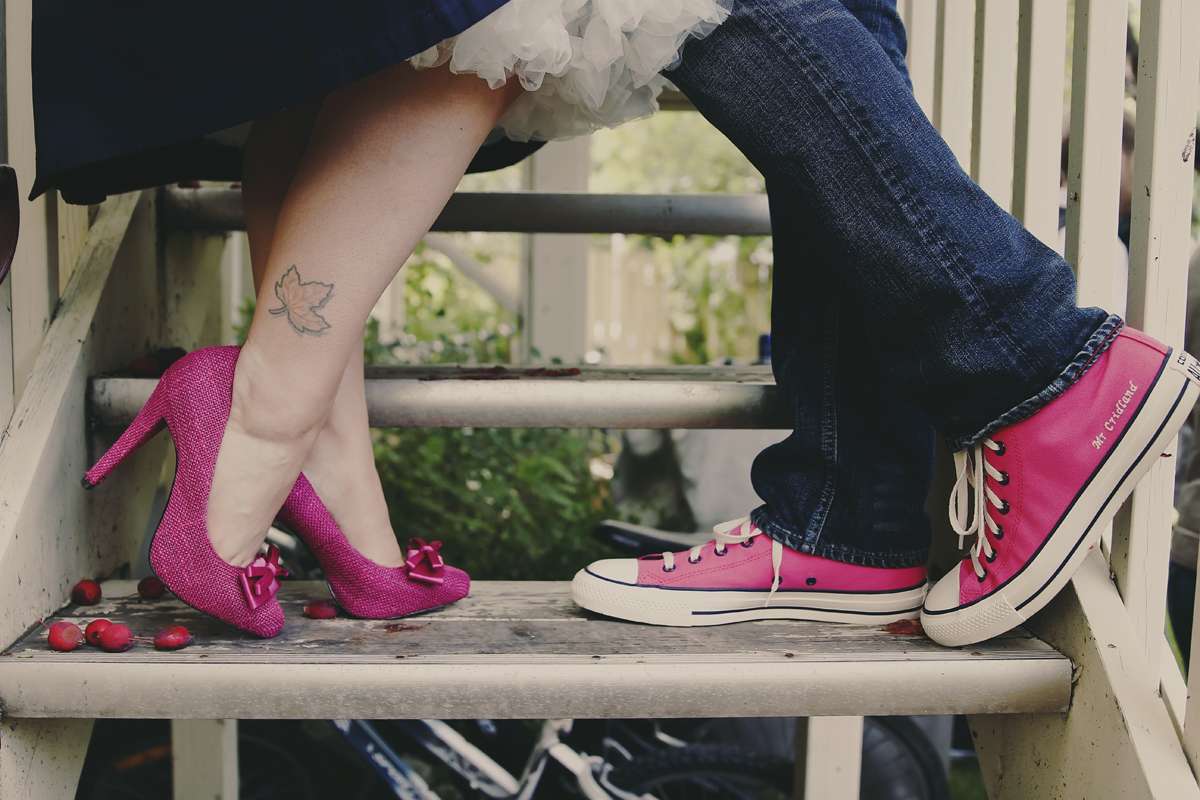 The couple did a lot of DIY projects, with help from family and friends, “We made the bouquets, my hair piece, the boutonnieres, the bridesmaids’ flower hair pins and most of the decor (table runners, ribbon garlands, table numbers and signs). We also wrote the content for the favours (recipe books of our favourite recipes) and spray-painted the centrepieces which were thrifted sport trophies. Our friend who’s a metalsmith made our wedding rings, one of my bridesmaids made all the ice cream and sauces for the ice cream buffet, my sister-in-law made the marquee letters, and another friend made the sash and bow on my dress!” 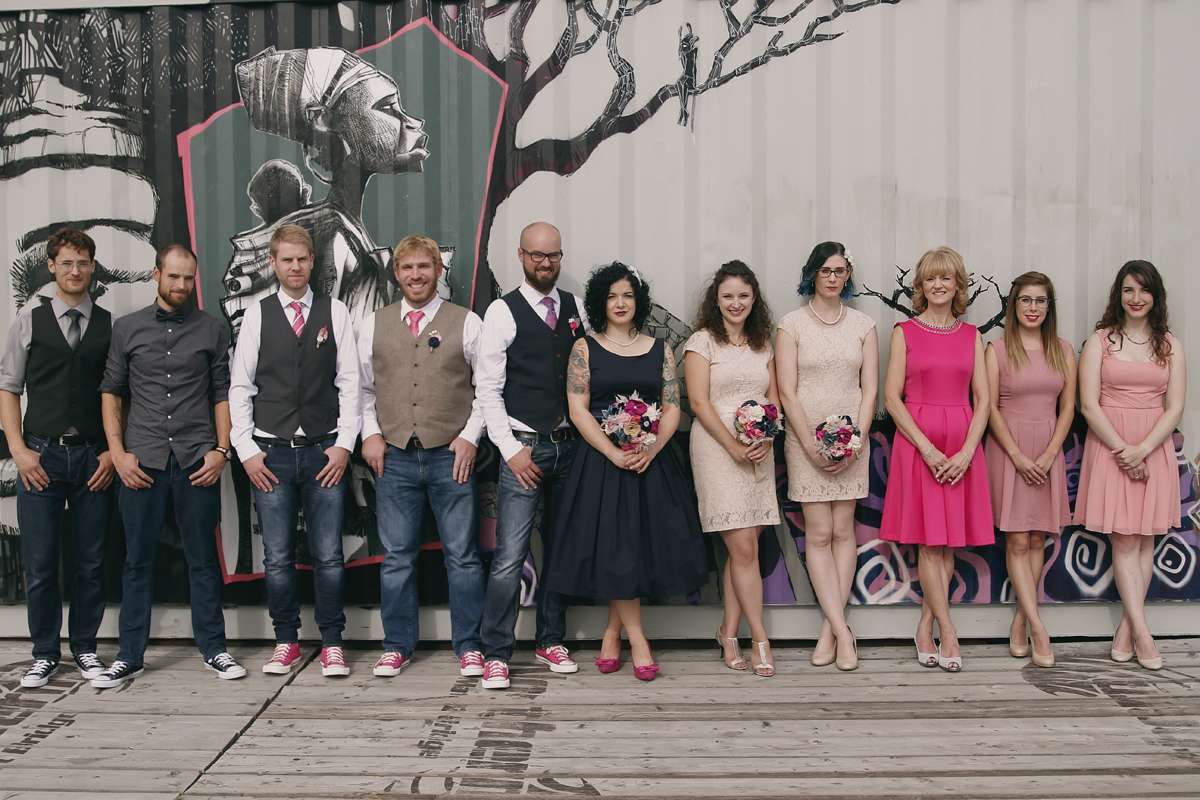 “We decided to have our wedding ceremony was on a Monday evening. Before the ceremony we had a cocktail hour with a ‘MINGLO’ (mingling BINGO) game that I made. Everyone really enjoyed it. It got people talking to those they didn’t know and set the tone for the whole evening. When the ceremony began we had all our family members walk down the aisle first and my aunt and uncle carried a portrait of my late mom and a vase of her favourite blooms. Then Brad and I walked down the aisle together, it was amazing! The entire room erupted into a roar of cheers and applause. I will never forget that moment! Of all the decisions that Brad and I made about the wedding, by far the best one was to walk down the aisle together. We also wrote our own vows and kept them as a surprise for one another. It was beautiful to hear Brad’s promises to me, and to make promises to him in front of all our loved ones.” 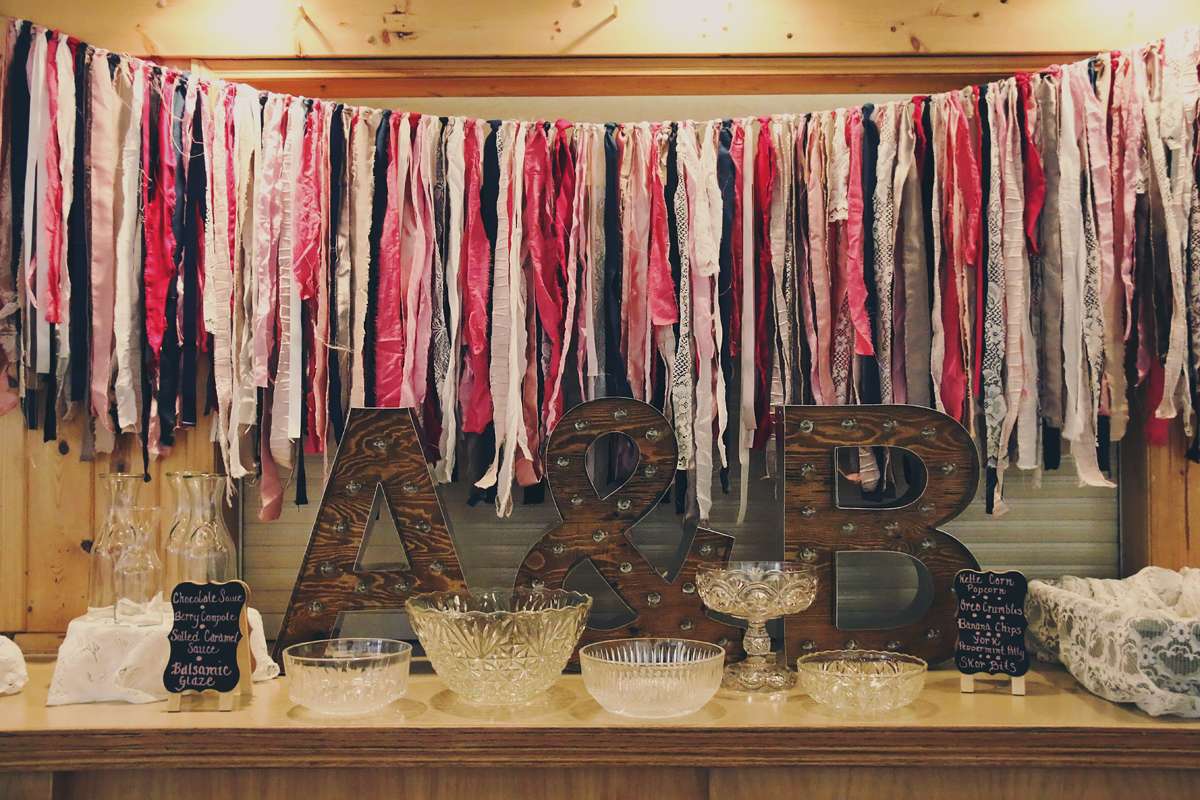 “We decided to have an ‘unplugged wedding’ until after the first dance. It was really important to us that people be present and not mess up the professional photos that we were paying a boatload for. All the feedback we got on this aspect was positive and people listened! It really worked out!” 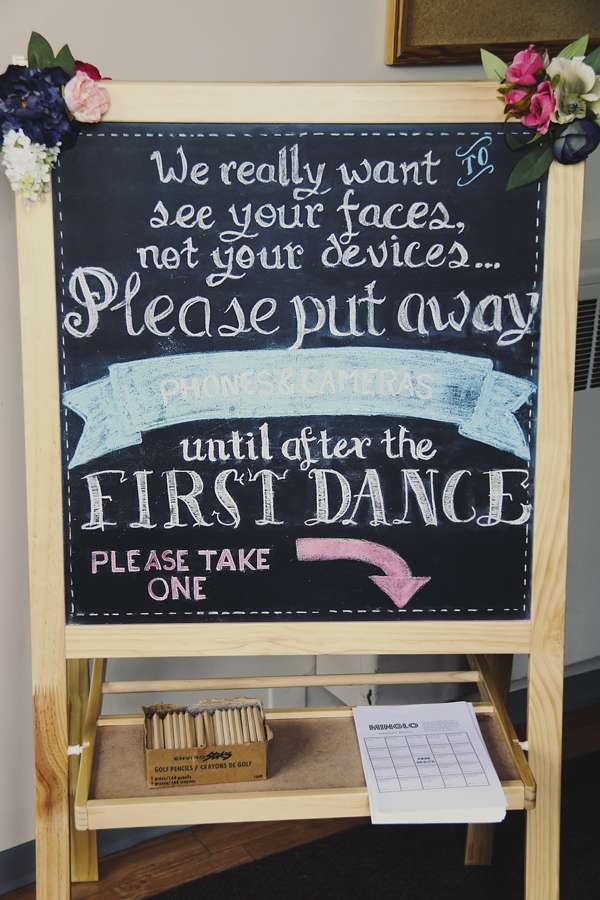 “Our first dance was the twist contest scene from Pulp Fiction (Teenage Wedding by Chuck Berry). We practised so hard leading up to the day and it was a total surprise to everyone! Not even the bridesmaids knew what it was! We then had a DJ play, followed by our favourite local rock band. At one point, the crowd picked Brad and me up to crowdsurf! We kissed while in the air, it was totally unplanned and one of the best moments of our night!” 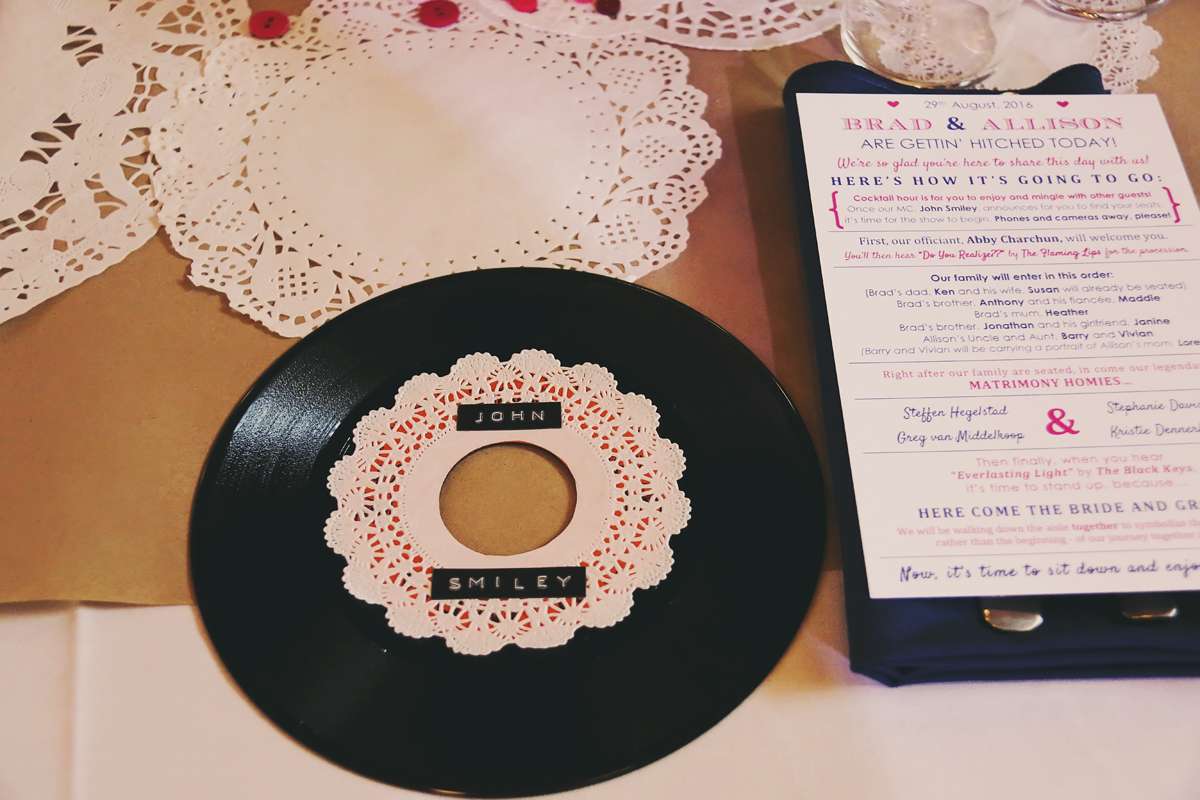 “Our biggest expense was our photographer, with the food a close second. It was important to us to hire a photographer who would capture our wedding in a style that we wanted, as the photos are what we will look back on years from now. But we saved money on my wedding dress (it was only $72!), by hiring a school bus instead of a fancy car, by doing so many DIY projects and thrifting or borrowing most of the decor, by having a friend make our wedding rings, by not having a wedding cake (we had an ice cream buffet instead!), and by having no fresh flowers!” 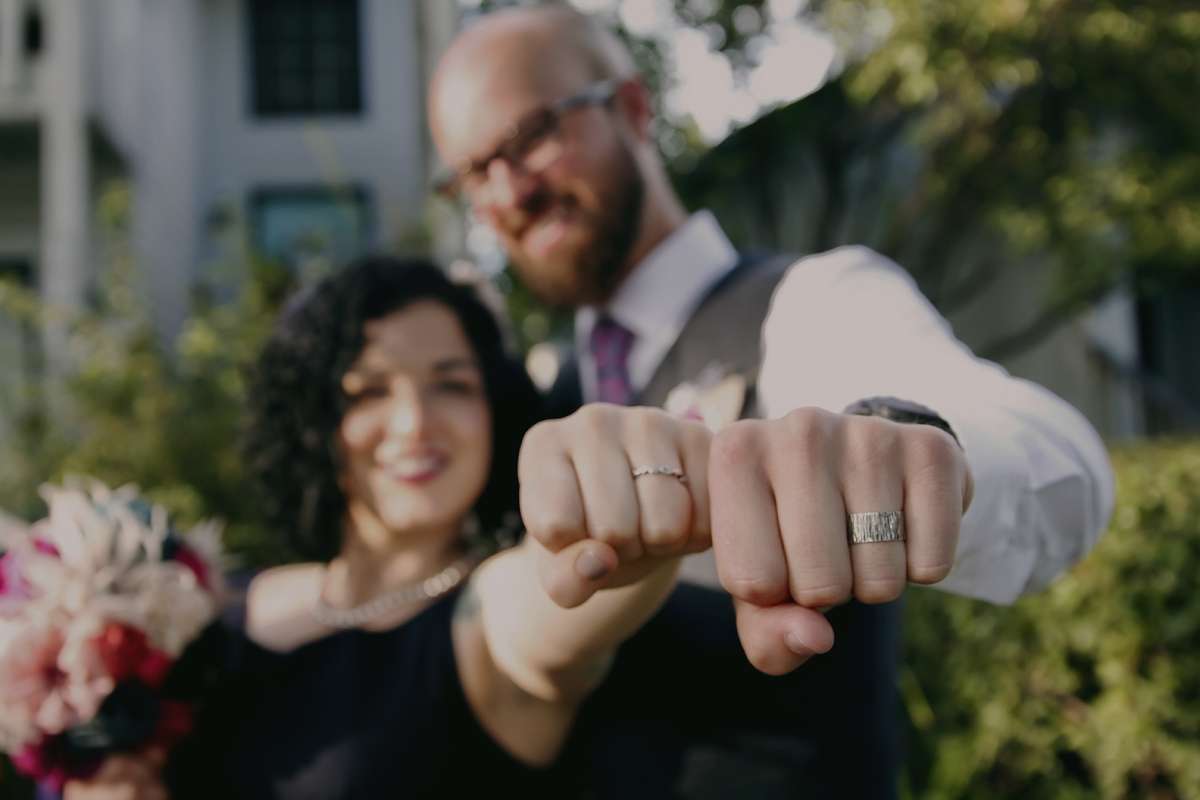 “I found planning a wedding without my mum was really hard. It’s the biggest reason why I opted not of going formal dress shopping, and found my dress online instead. The idea of trying on dresses without her there broke my heart. However, the best thing about planning our wedding was how much of a team Brad and I really were. We collaborated on all decisions and it really brought us closer as a couple.” 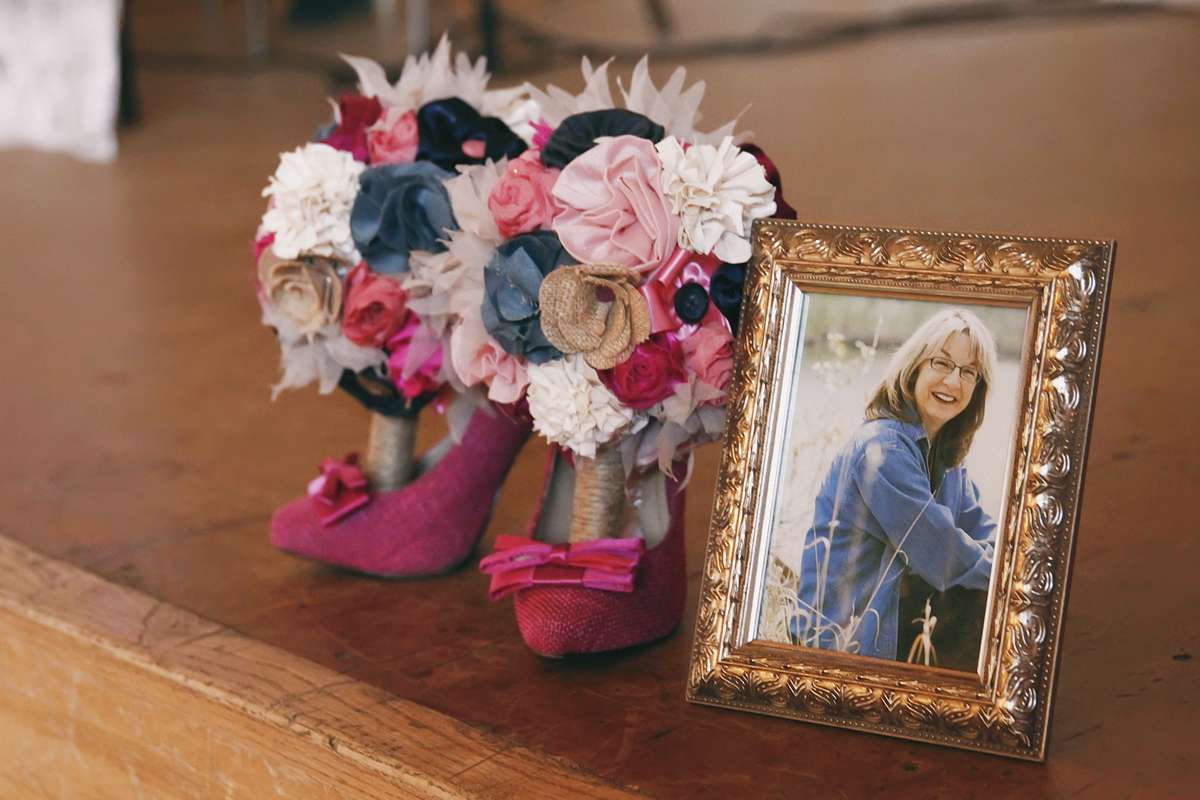 “Our advice for future brides and grooms is hire a wedding coordinator! Being able to both relax and have the best day of your lives without having to worry about anything is worth the money!” 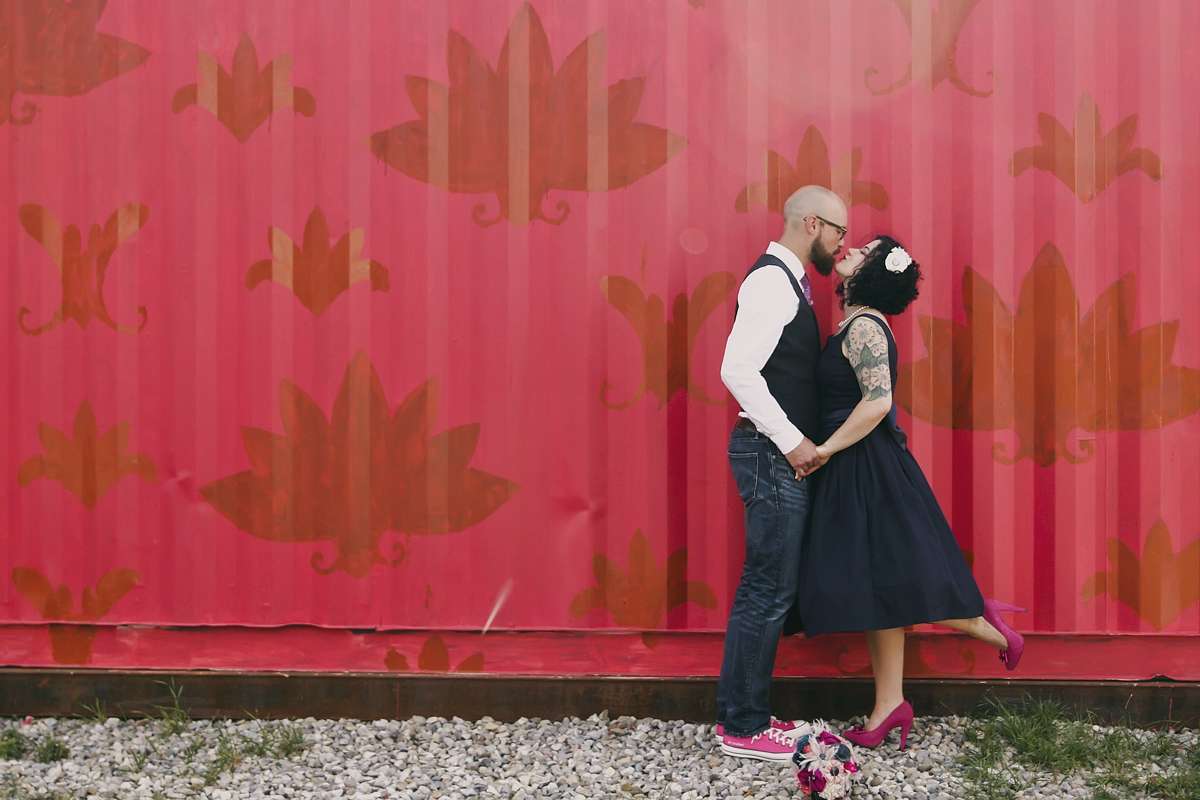 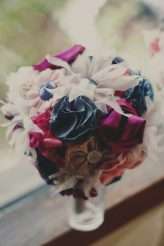 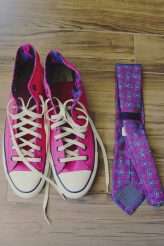 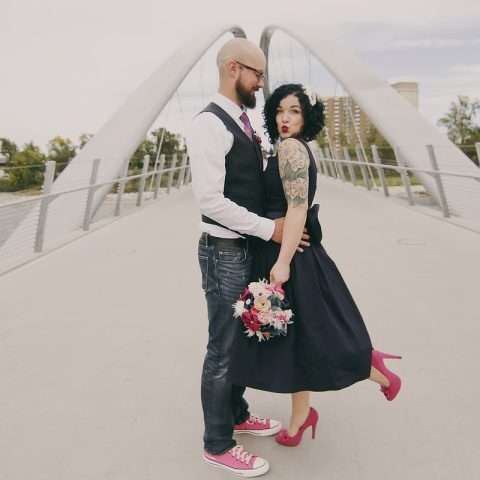 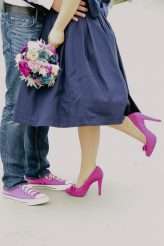 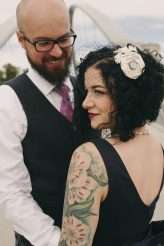 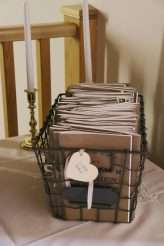 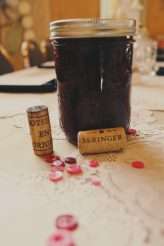 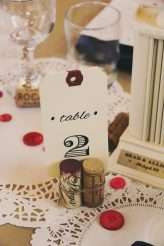 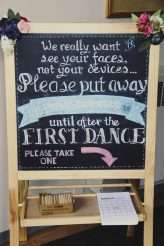 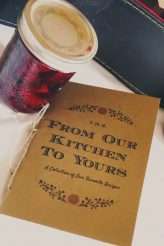 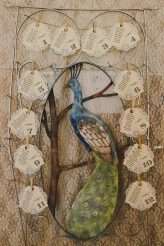 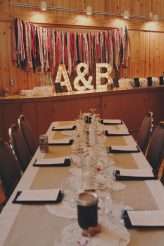 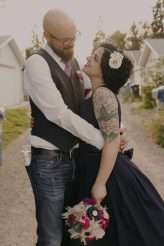