Libby and Matt were married at The Chainstore at Trinity Buoy Wharf. The inspiration for the wedding was the bride’s emerald engagement ring, which was originally Matt’s grandmothers. The also bride wore a bespoke green silk dress by Wendy Benstead.

“We had already been considering green for our main colour, but then we finally moved house and got our first garden, and decided to expand on that and make gardens the theme” the bride said. “We ended up with a gift list at a garden centre, hired trees to decorate the venue, and wild, ivy-type flowers for the bouquets and tables, as well as a garden arch covered in flowers which we got married under.” 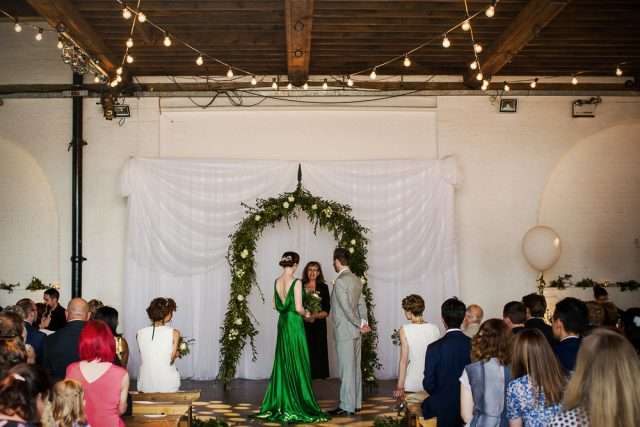 “The most unqiue parts of our wedding were probably more the things we didn’t do” she continued. “We didn’t do favours, we didn’t have a first dance, we didn’t have a traditional wedding cake, I haven’t taken Matt’s name, I don’t wear a wedding ring (just my engagement ring) and obviously I didn’t wear white! We decided not to do anything just because it was traditional, although we weren’t against carrying on the traditions which we liked. For instance, throwing confetti seemed to really fit with the theme of the wedding, and I bought some beautiful green and white petals from The Real Flower Confetti Company.” 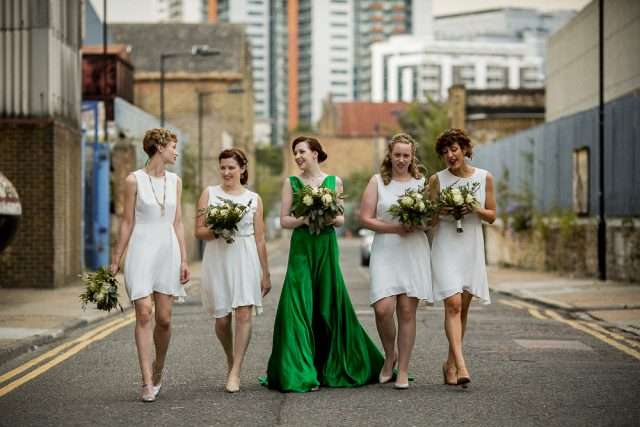 Getting married in central London meant their venue was the biggest single expense. “We knew we wanted to get married in London but we struggled to find somewhere which was exactly right, with outdoor space as well as indoor, in an attractive and convenient location, with good photo opportunities, good catering facilities, but also with a bit of personality. Obviously there are cheaper venues out there, but we fell in love with The Chainstore straight away and planned the wedding around the venue’s availability. We also took advantage of a few of their items available to hire, like the trees, the pea light curtain and a neon BAR sign, which were somewhat pricey, but made the place look absolutely amazing.” 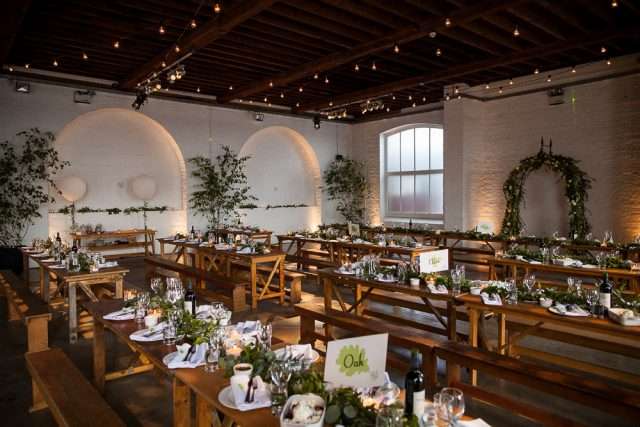 “Our drinks budget was comparatively modest, because we decided to go for Prosecco over Champagne, and supermarket wines. I really didn’t want to have a pay bar so I exploited lots of supermarket deals over a few weeks and bought vast quantities of cheap but perfectly quaffable wine by the case. I also decided at the last minute to get some craft beers in for the evening in case people were wined-out by then, but in the event people started drinking it with their canapés and it was gone in a flash – wish I’d got more! We also had big kilner jars of water with fruit in for people to rehydrate, and tons of sparkling water and cordial for the non-drinkers.” 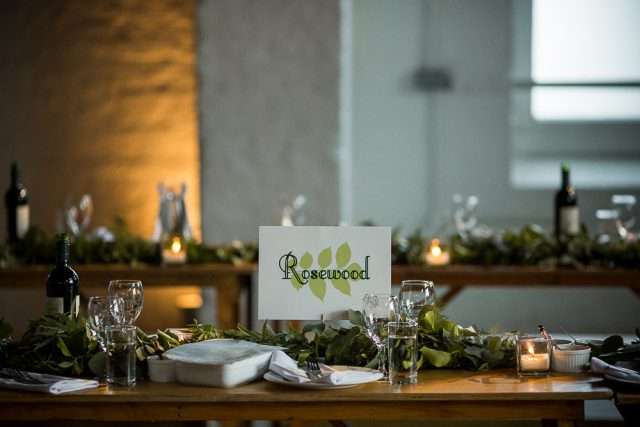 “We also saved money on sweet stuff by having a cake table, a penny sweet selection and a cheese table, instead of a traditional dessert, wedding cake and evening snack. They all came out at the same time and it worked pretty well. The cake went straight away but people were lurching to the cheese table all throughout the night to refuel, and they kept nipping off the dance floor and coming back with a paper bag of jelly hearts.” 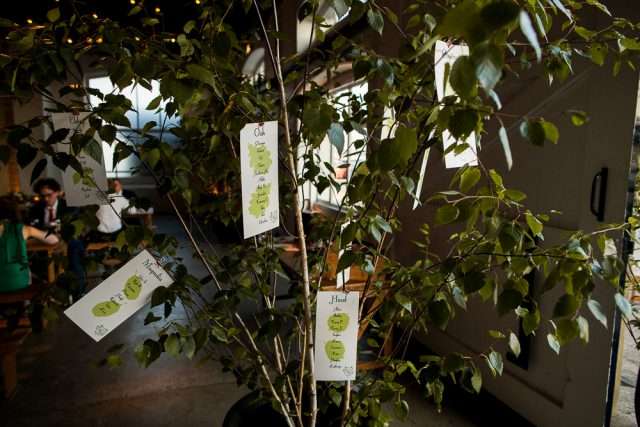 The only thing they would have done differently was to actually have the first dance they didn’t originally want! “I wasn’t keen on being the centre of attention” she explained, “but we had a huge dance floor and a great band and DJ, but it was a bit sad and abandoned because so many of the guests were outside chatting and enjoying a beautiful summer’s evening on the river. It was very difficult to persuade them to come in and dance, whereas I think if we’d made a formal event of the dancing, more people would have joined in.” 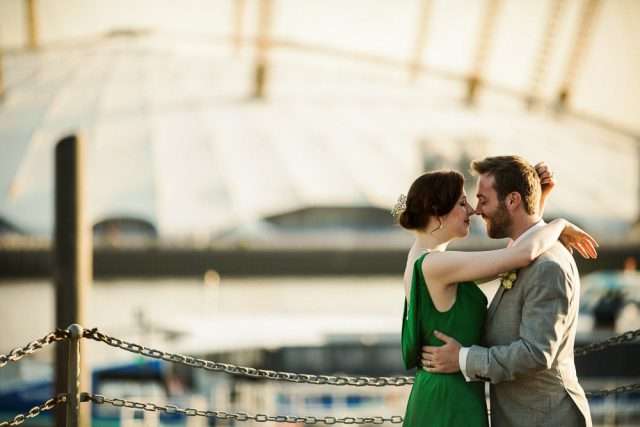 “My advice to other couples would be that if there’s anybody you feel even vaguely tempted to invite, just go for it: you are so unlikely to regret who was at your wedding, but you might regret who wasn’t. On the day you just want absolutely everyone there to join in the fun. Also a wedding planner may sound like a jaw-dropping luxury, but it was easily the best money we spent. It meant that for us the process of planning the wedding was far more of a pleasure than it was a chore, and I do urge people to consider it, even just to handle the big things like venue or catering searches.” 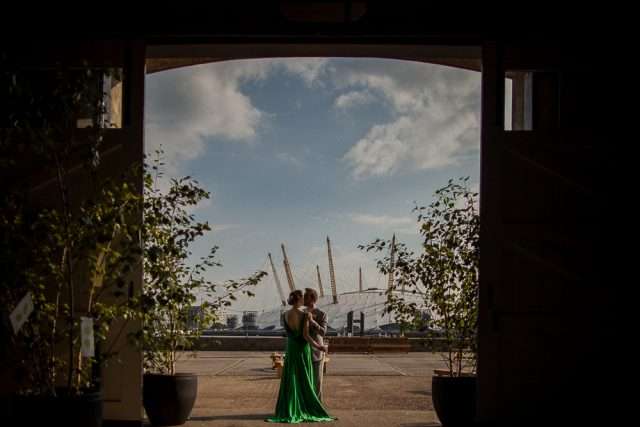 The theme for Katie and Jimmy's informal winter wedding was a mixture of a 1960s working man's club with a 1920s speakeasy. They were married at Hackney Town Hall and hosted their reception at Earl Haig Hall, an old British Legion social club in Crouch End.

Kia and Daniel's July wedding took place at Dalston Roof Park in London, a quirky and cool events space in Hackney, overlooking the city's skyscrapers. The day didn't really have a theme other than having fun!

Phoebe and Stephen wanted an city wedding in London, but for it to also have elements of nature. The were married at The Town Hall Hotel in Bethnal Green but some clever ideas and flower installations brought the outside in!