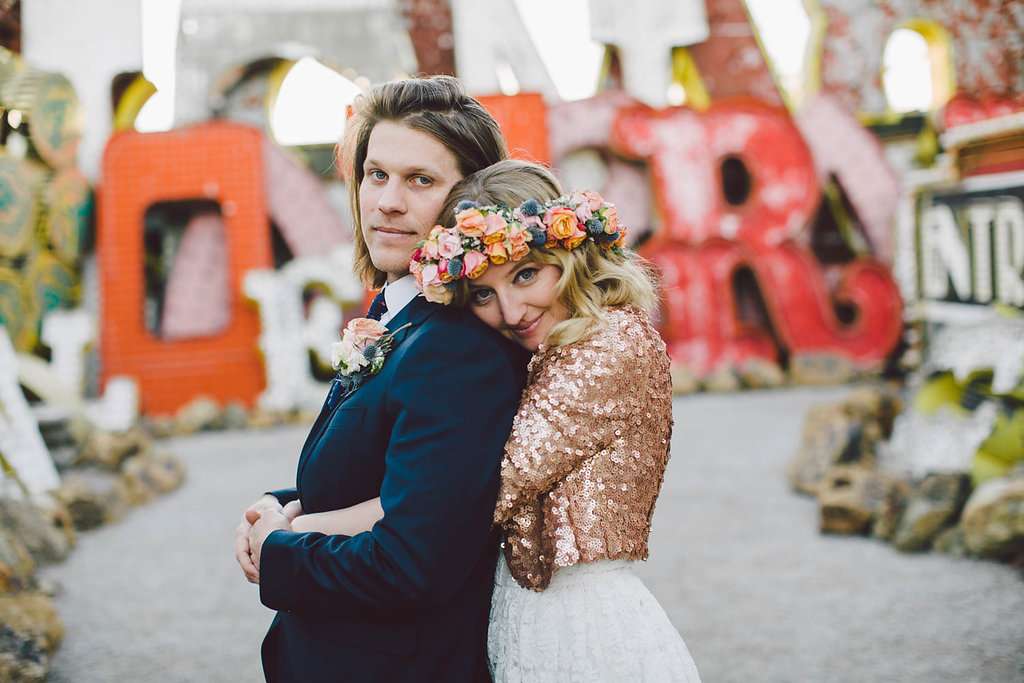 Sara and Logan didn’t elope in Vegas, because they wanted their closest friends and family to be there, but they did want a fuss and stress-free wedding that didn’t take a long time to organise.

“We were originally planning to do a more typical wedding at home in Los Angeles with 100 or so people”, explained Sara, “but after a couple months of entertaining the thought of what we thought we ‘should’ do (and all of the overwhelming details and costs that came with it), we took a step back and revisited what we actually valued in a wedding. The Neon Museum in Las Vegas was the first and only venue we had both lit up with interest about, and when we started to seriously look into it, everything fell into place.” 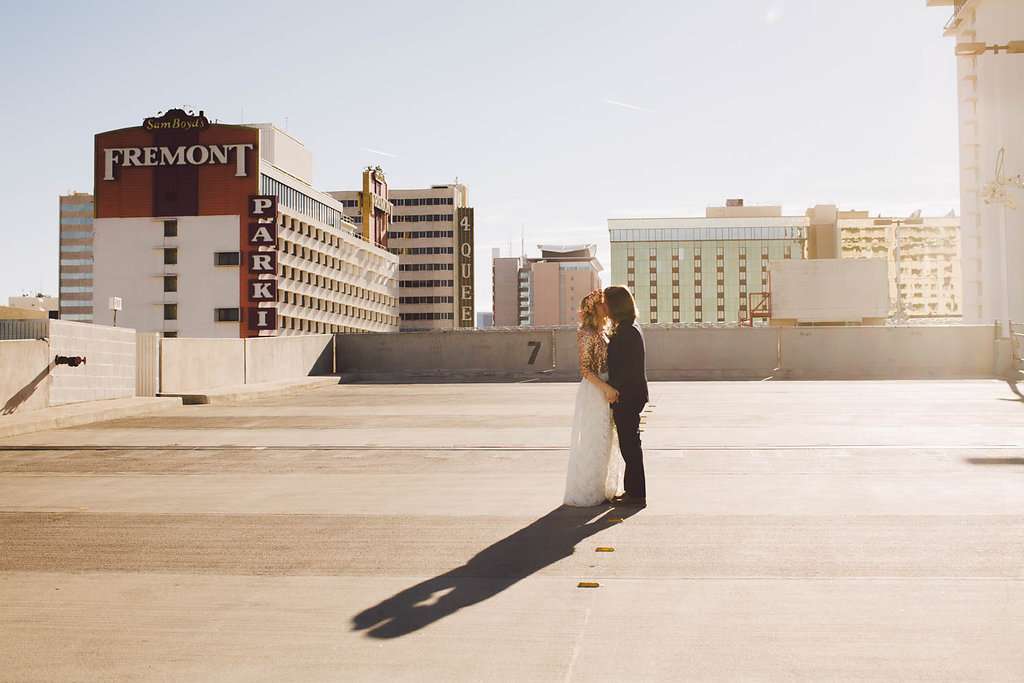 “The ceremony was so much fun! We met Pastor Pete, our officiant, about a half hour before the wedding. One of the requirements of getting married at the Neon Museum is you have to use their preferred officiant group (Elegant Vegas Weddings), so we didn’t get to choose who married us, but he was awesome. This definitely wasn’t his first rodeo, and he used the stories and details we sent him in a questionnaire beforehand to create a really heartfelt and beautiful ceremony for us.” 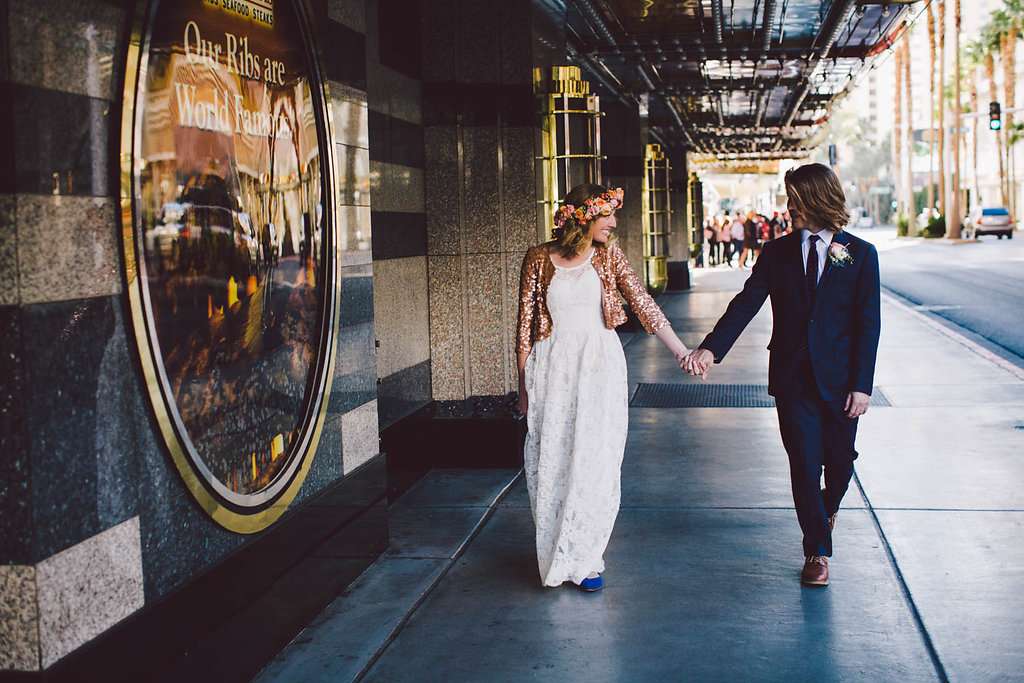 “One of the most emotional parts of the ceremony was when he asked us to stand and face our guests – since there were only 20 people there, it was really amazing to make eye contact with each and every person there and feel their support and love for us. We did a ring warming where our rings were passed around to each person too. We used standard vows, but we wrote messages to each other that we read out loud – everyone had a good laugh when I showed the group that my letter was about a full page longer than Logan’s! In general, everyone was so happy and we couldn’t stop beaming and laughing the entire time.” 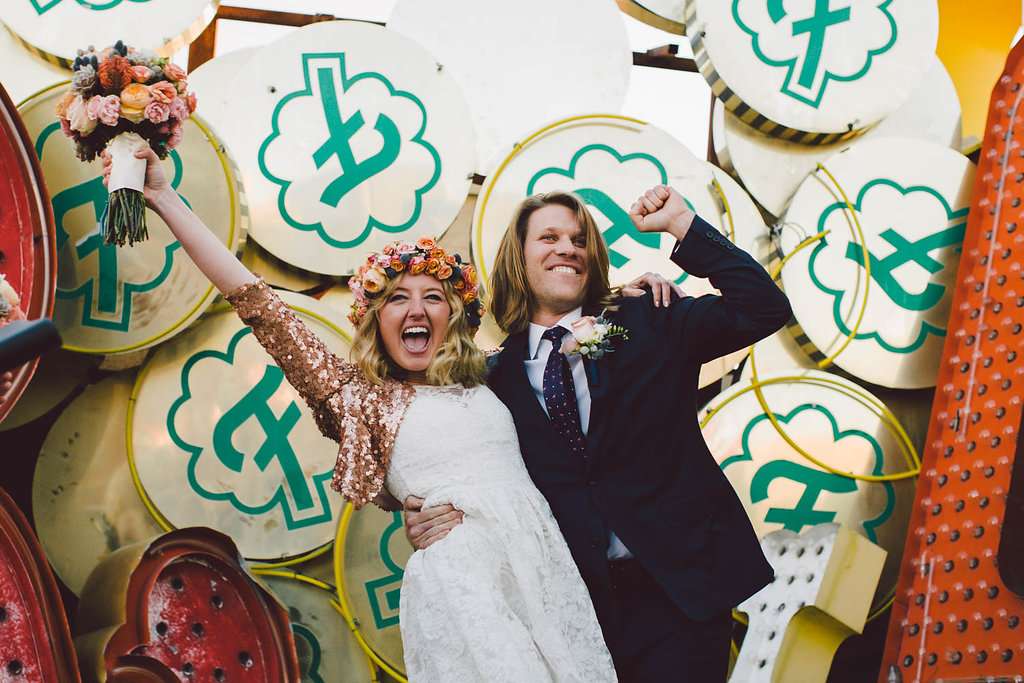 The bride’s favourite thing about the wedding was the love and appreciation they had for the people that came to Vegas with them. “We were so humbled by all of our friends and family that didn’t even bat an eye before they agreed to travel to Las Vegas with us and be there to see us get married on a Monday”, she said. “When we were at dinner I almost started crying multiple times looking around at the group of people sharing the day with us – from some of our dearest friends and family, to the waiters from the restaurant who went above and beyond to make our party feel so taken care of.” 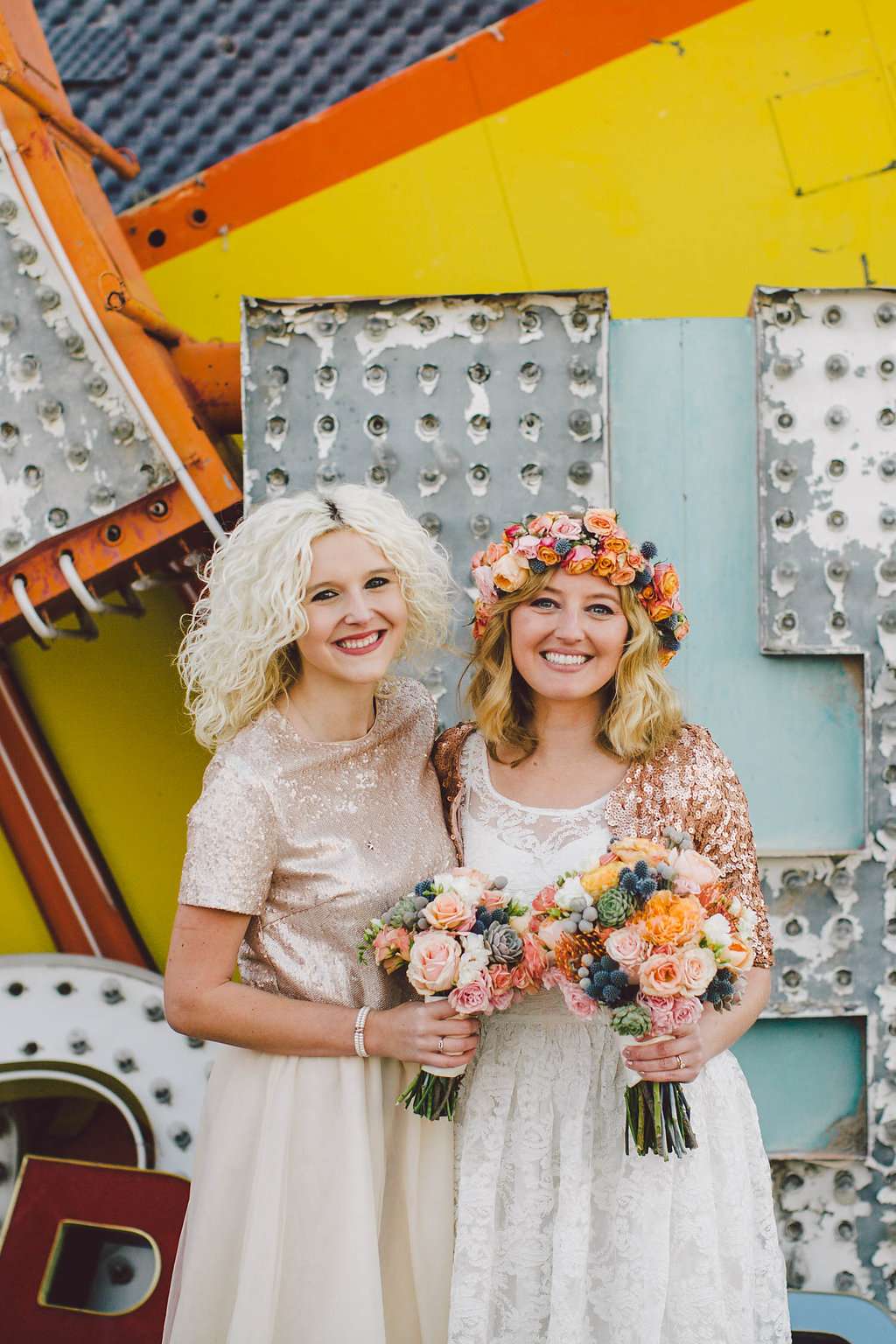 “Our biggest cost was our photographer (with the reception dinner coming in a close second) but she was SO worth it. We were going to book Evangeline as our photographer for our Los Angeles wedding, and were so thrilled when she was game to travel to Las Vegas when we changed our plans! She has a wonderful sense of adventure and spontaneity that was perfect for us as a couple and for the tone of our wedding.” 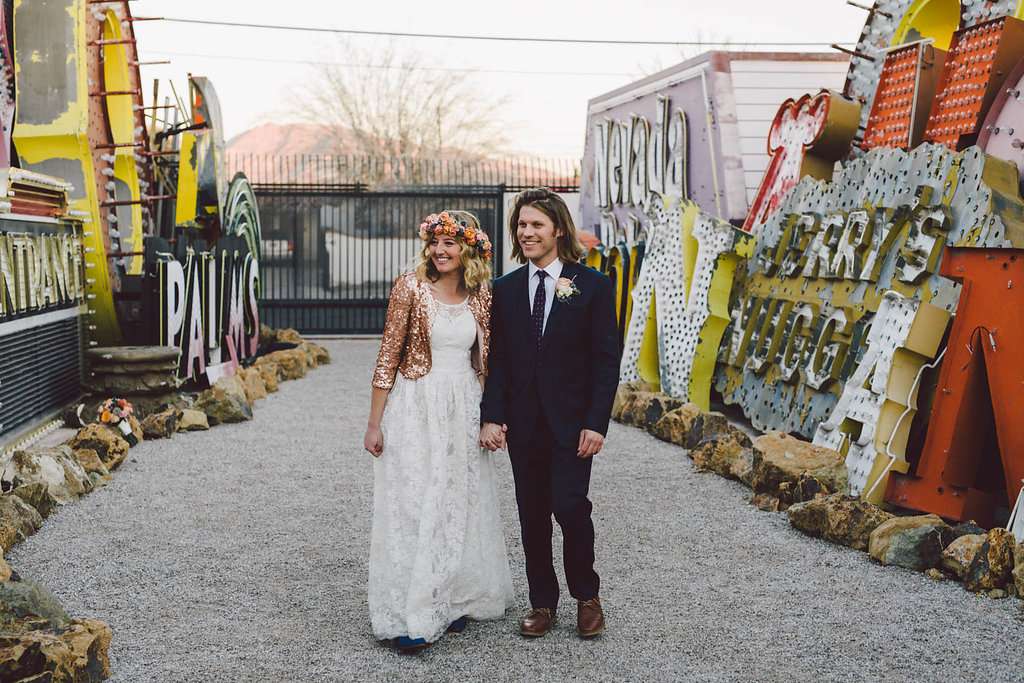 “She also convinced us to do a ‘first look’ (something we weren’t thinking of) where we met up before the ceremony to go on an awesome photo adventure around Las Vegas. It was not only a blast but it was an opportunity for Logan and I to spend some time alone and also totally calm my nerves before the actual ceremony. I would recommend that every couple does this!” 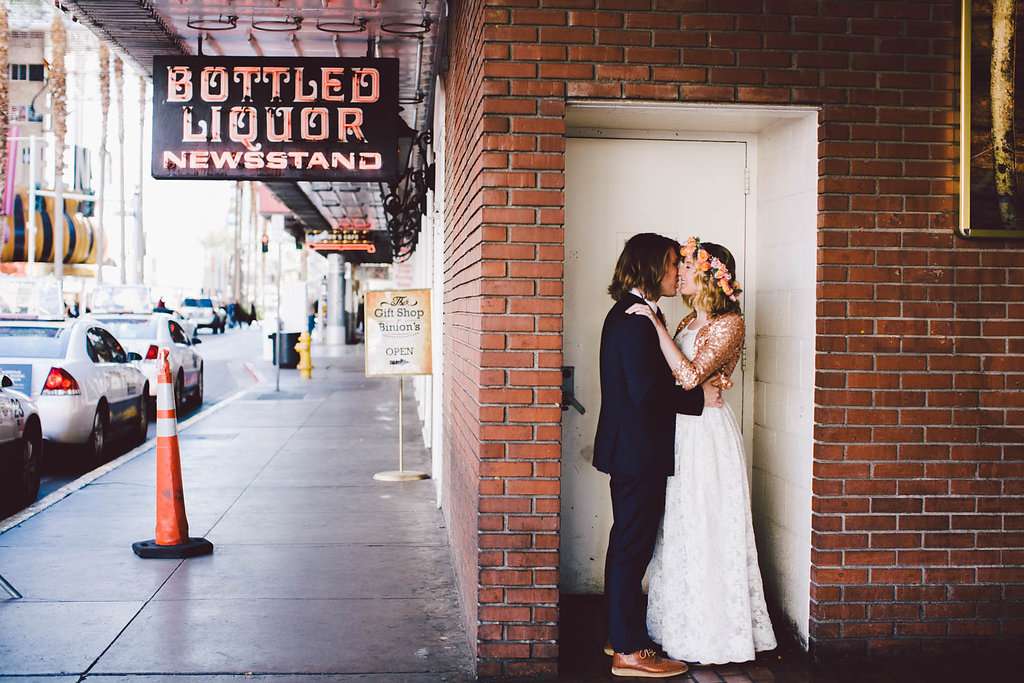 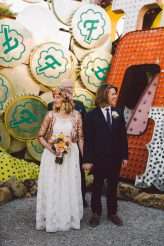 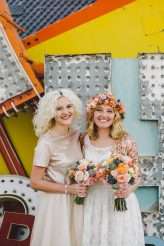 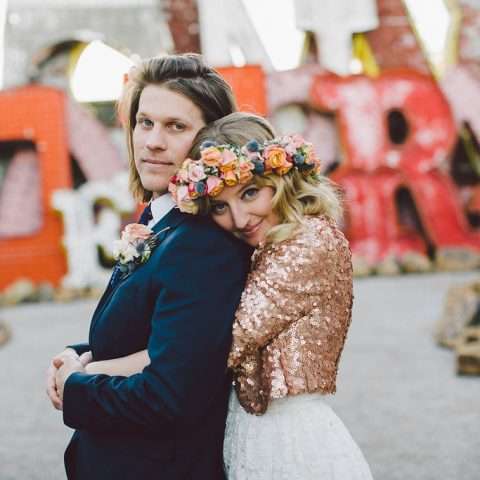 Nay and Oli planned to marry in Vegas on a family holiday in October. "We decided to tie our wedding into a family trip to Vegas for my father's 60th birthday," the bride explained. "The priority for us was no fuss, we’d already hijacked the family holiday, we wanted it quick and simple. We decided to do it this way as I thought it’d be a crime to go to Vegas and not get married, so I proposed to Oli using a ring which a jeweller friend had made, and stuck it in a fortune cookie which I'd made and decorated with our three year old son!"

Liam and Tara’s September wedding was inspired one thing; their journey together. Meeting at 17 and being each other’s first loves, they’ve had a rocky road to get to where they now are and so wanted to celebrate not only the things that they like together, but also as individuals. This translated as a fun, geeky mismatch of inspirations; comic books, unicorns, Disney, Alice in Wonderland… the list goes on!