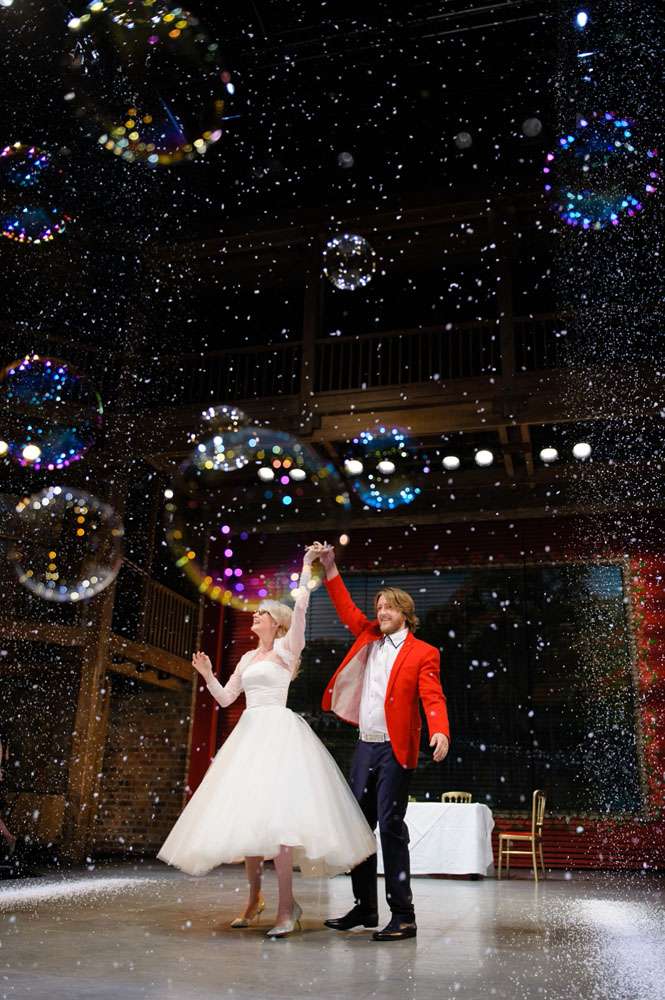 Ali and Gem are both into the arts, so having their wedding at the groom’s place of work, The Royal Shakespeare Theatre was the perfect choice! They wanted a wedding that reflected both of them and avoided tradition and trends at all costs! The groom actually sent me the most amazing email while they were planning their wedding (which I couldn’t help but share!) so it really is a thrill to see how their wedding turned out!

“From the very start we were inspired by Rock n Roll Bride”, they began. “Through the blog we could see that we wouldn’t be chastised for having a wedding that didn’t fit or didn’t follow a specific structure or tradition. We didn’t want tradition and grey monkey suits, but we didn’t want to be drinking out of jam jars and buying hipster centrepieces from vintage car boots either. We didn’t want to think about what cake ‘suits our personality’ or what colour theme to go for, so we just took it all one step at a time and agreed on everything together.” 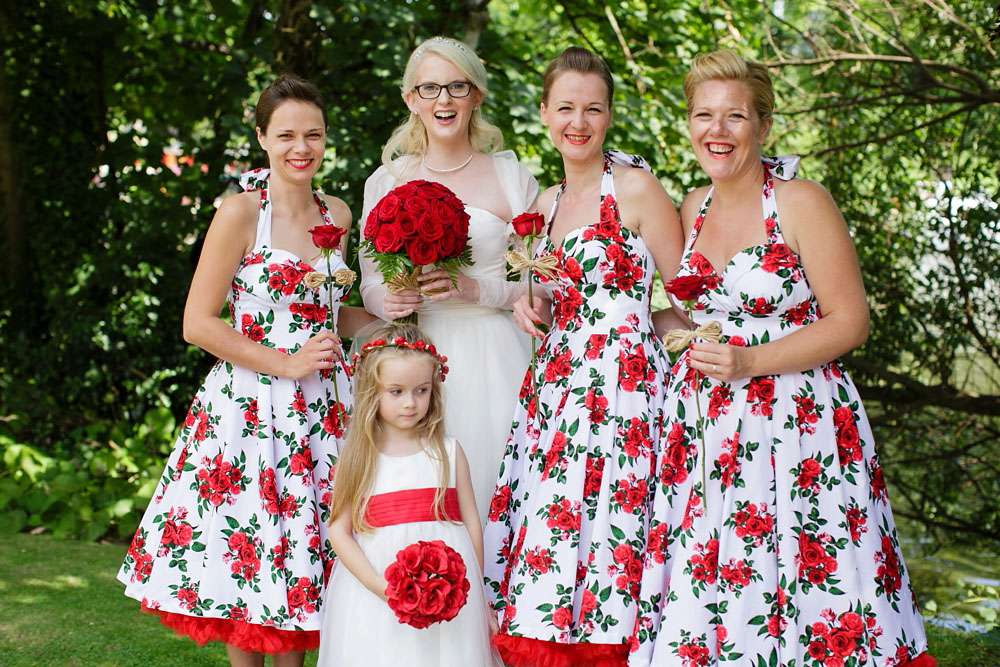 “The question we most found ourselves asking was ‘Why?’ – ‘why would we leave a sugared almond for our friends?’, we hate them (the almonds, not our friends), the guests hate them, why would we do that? Why would you have a three course meal? We’re real foodies but we wanted to spend our day talking to our guests not watching them, from the back of a room, suckling on an amuse bouche. Once you start asking ‘why?’, a lot of the parts of a wedding just seem kind of odd. We didn’t want to find ‘alternative’ options to the traditional aspects of a wedding, we just scrapped things we didn’t like.” 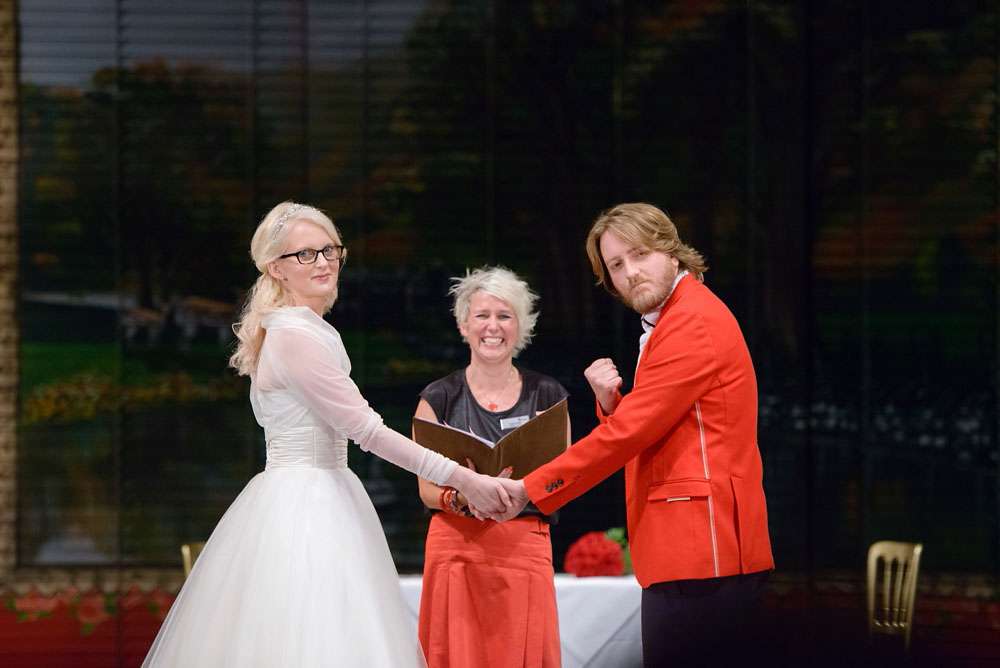 “Relatives can deal with alternative cakes, but you should really see the uproar when you tell them you’re not having one at all, it’s like you’ve punched their kids on Christmas day. It was a similar effect when we told people that not only would we spending our pre-wedding night together, but that we had booked a nice hotel to make the most of it; at 2am, the night before our wedding, we were in the bath together.” 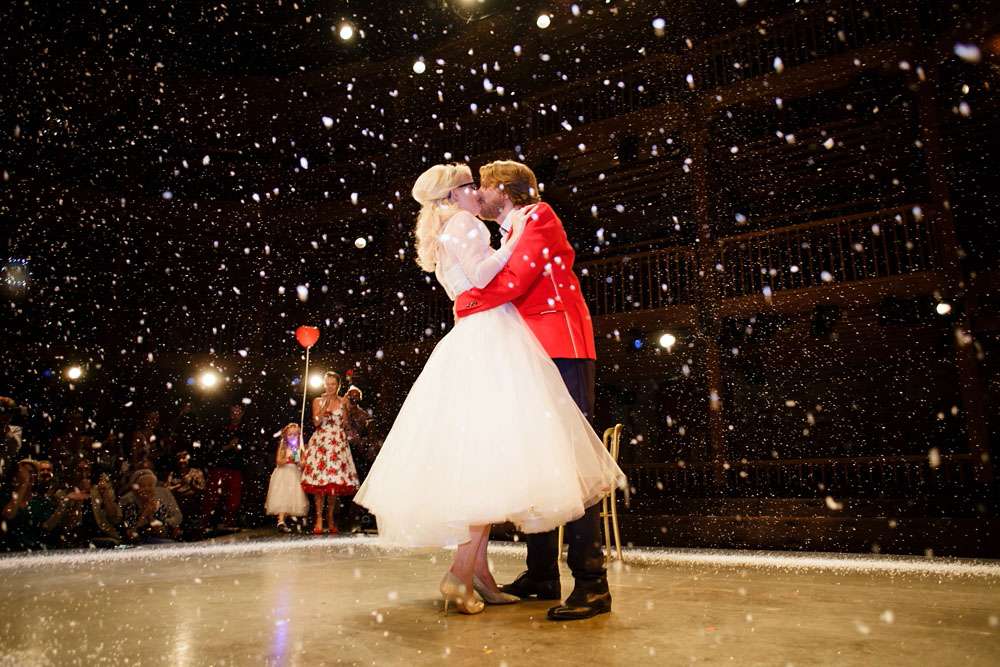 The ceremony was held at The Swan Theatre in The Royal Shakespeare Theatre, “We have always loved theatre and the arts, so getting married on stage was natural to us”, they said. “Ali works for the Royal Shakespeare Company (RSC), and Gem work for Shakespeare’s England (local tourist board) and we live in Stratford-upon-Avon, so all the locations and thoughts and feelings behind them didn’t feel unusual or different at all. It was a homely wedding and it was all about love. Yes, we did have a snow machine, but that was a happy stroke of luck as it just happened to be there, ready for the performance taking place that same evening on the stage we got married on. After all, there is only ever one correct response to the question ‘Do you want to use the snow machine?’!” 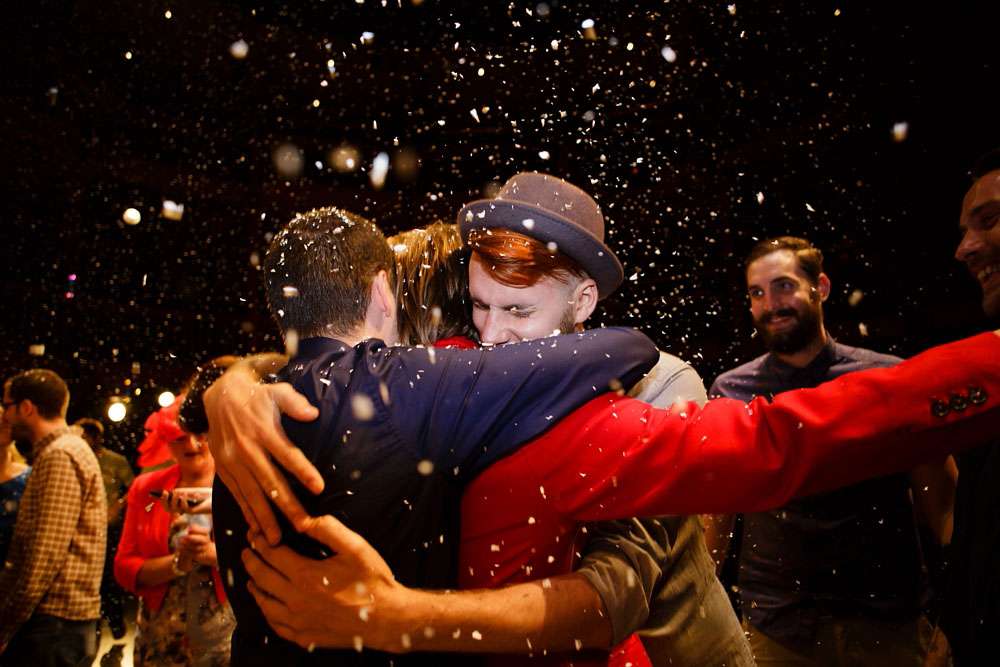 “By far the best thing of the whole day was everyone hugging and kissing in the snow onstage after the ceremony, being surrounded by so many open smiles was overwhelmingly enchanting. Whilst the feeling at that moment could never be captured in a lens, Tux and Tales did a fantastic job of it!”

“We also don’t particularly like cars, so we walked everywhere. We walked onstage together, hand in hand and we walked to our reception venue the same way. We had the reception at The Hathaway Tea Rooms, outside, with no covering, in England. Which in all honesty, is the most draw-droppingly unusual aspect of the whole thing… no rain! In a way it felt like a wedding boiled down, without the crap and just about us and our loved ones.” 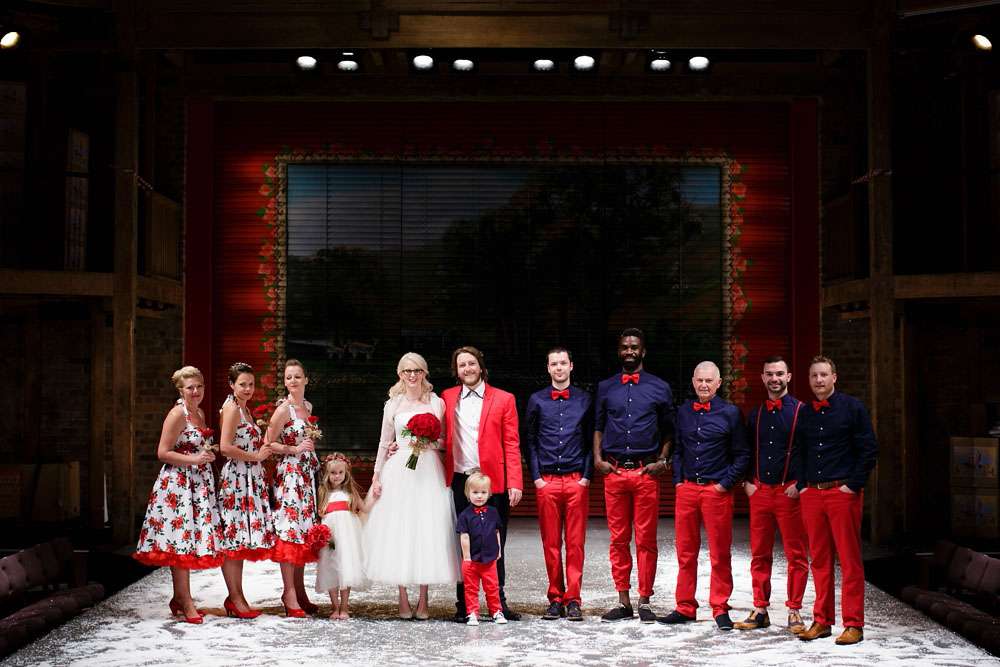 “Choosing our reception venue was a special moment for us”, they continued. “We frequent the Hathaway Tea Rooms fairly often and every time after we had searched for a reception venue, we would return to the secret courtyard garden, have a cup of tea, and talk about why none of the ones we had seen were quite right. We would finish by saying – ‘if only we could find somewhere like here’. So one day we asked the owner and he said yes, as long as he could do a normal days service. So it transpired that immediately after our ceremony, our groomsmen and bridesmaids would hot foot it to the reception venue, where they had only 30 minutes to transform it from tea-room to reception venue, before the guests started to arrive. Fortunately for them we’re not big on flowers or nik naks!” 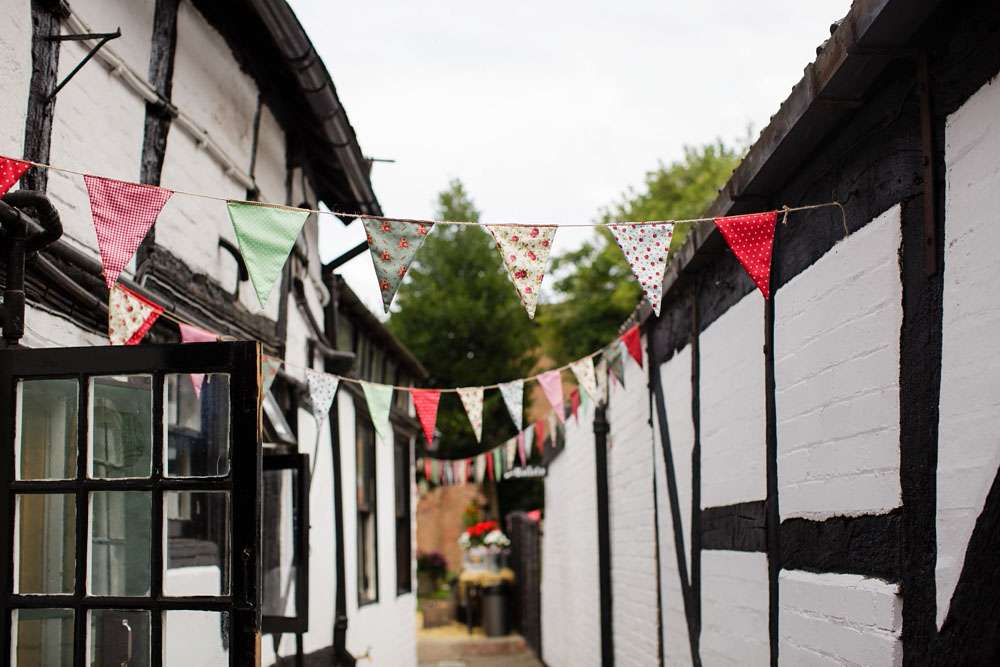 “The reception venue is in the middle of a picturesque Tudor high street where everything closes at 5pm. Late into the night, whilst the disco was blearing out R&B on the second floor, we got dragged to the window so that we could be shown a group of total strangers and passer’s by that were all dancing to our music in the street! When we got to the window, they all cheered.That was pretty bloody awesome!”

The couple spent £8500 on their wedding and the most expensive aspects were the band and photographer. “We like to think that whilst a friend or cheaper photographer can capture some pictures of what people saw on the day, it takes a professional to capture the feelings and emotions as well”, Gem said. “The photographs are your memories and you should never skimp on them. However we set a budget right from the start and stuck to it religiously. Every time one of us wanted to spend more than what we had budgeted on something, we relied on the other to step in and say no, you have to be strong and place your trust in each other. Ali became the ultimate spreadsheet Nazi and if he hadn’t, we would now be in debt up to our eyeballs in credit card debt!” 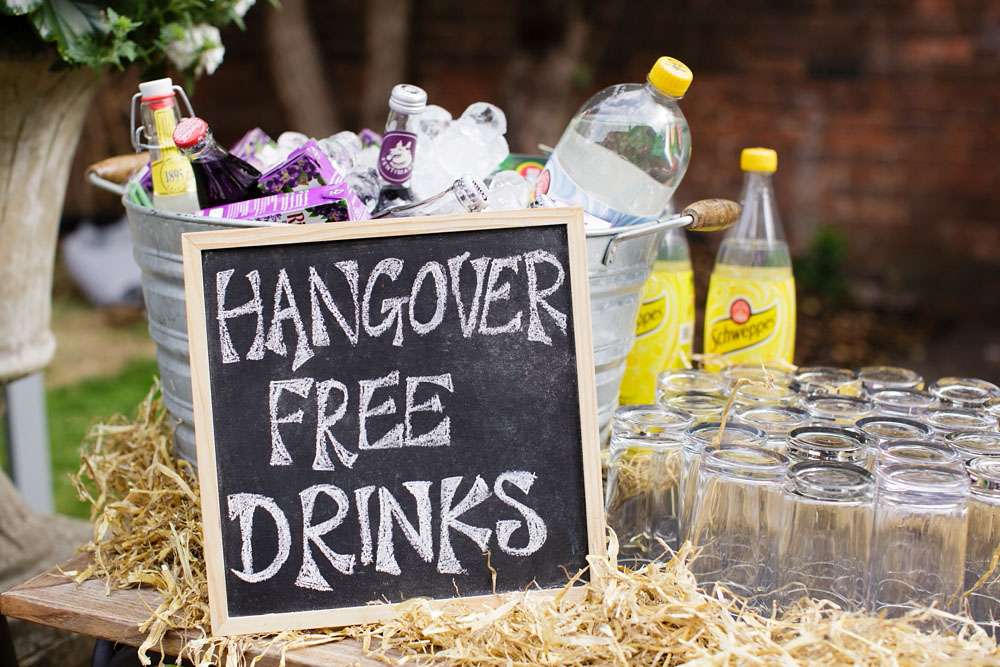 “It became apparent early on that we wouldn’t be able to afford all the people that we wanted to invite”, they concluded. “Our guest list went from 280, to 180, to 140 until we found out the garden held a maximum of 80 people which meant that we had to cut out guest list in half again. This final drop in numbers turned out to be the hardest, and most painful, decision of our wedding as we had to tell our large extended families that they couldn’t come (we had aunts and uncles, but no cousins). Adding our cousins and their families would have doubled the size of our wedding which we simply couldn’t afford, so rather than pick and choose we didn’t invite any. Numbers is the most difficult game that you play at your wedding, the more you have, the thinner you have to spread the money and we had promised ourselves from the start that we would never skimp on our guests. As much upset as it caused for both ourselves and our family, we are both glad that we decided to do it. The people that love you will still do so whether you invite them or not, and those that fall out with you for it, well, did you really want them anyway?” 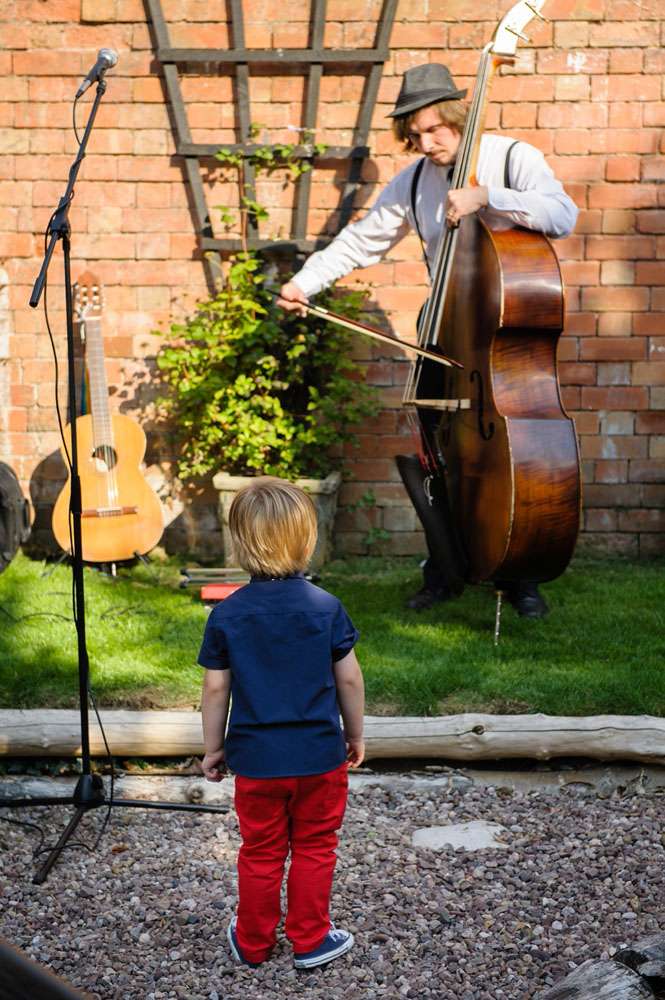 “If we were to give practical advice it would be to ask for or investigate places that don’t ‘offer weddings’ as venues. “Not only did The Hathaway Tea Rooms save us a little bit of money, the staff were incredibly attentive. Rick, the owner, poured over every detail and was so helpful and accommodating with whatever we needed. He allowed us to store things on the premises and let us breeze in and out whenever we wanted to show friends and family on the build-up to the wedding. Gem used to joke that it was like having your Dad help you organise your wedding and in a lot of ways Rick was like that. You will never get that kind of service from someone that churns out a wedding every other weekend. It never hurts to ask the question ‘Can I have my wedding here?’” 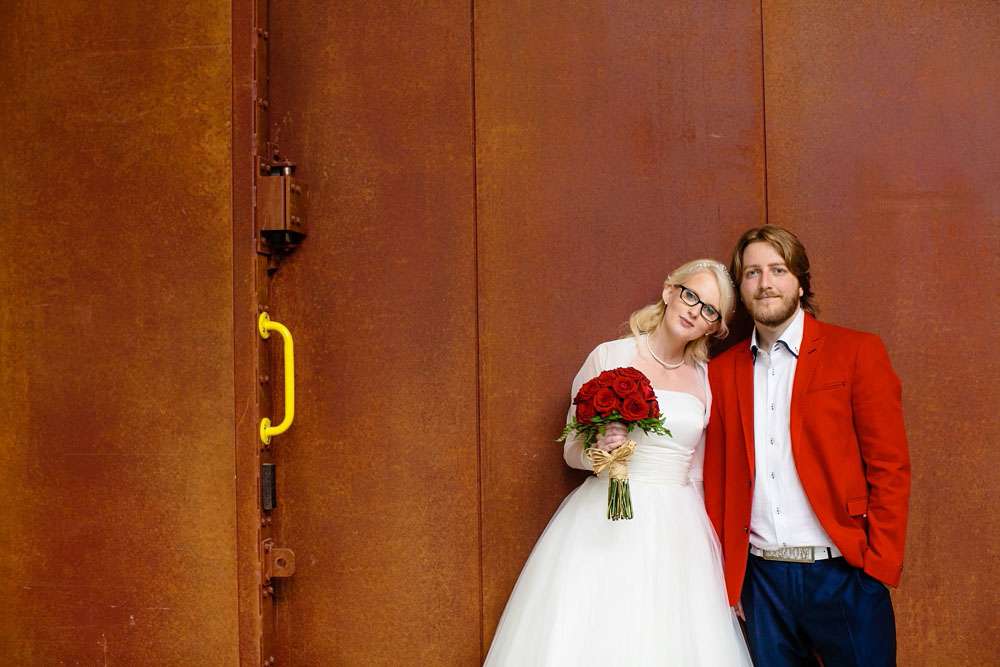 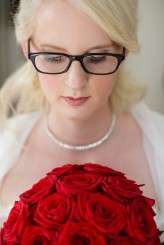 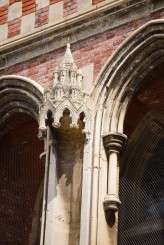 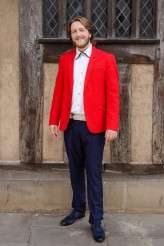 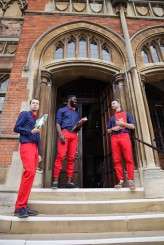 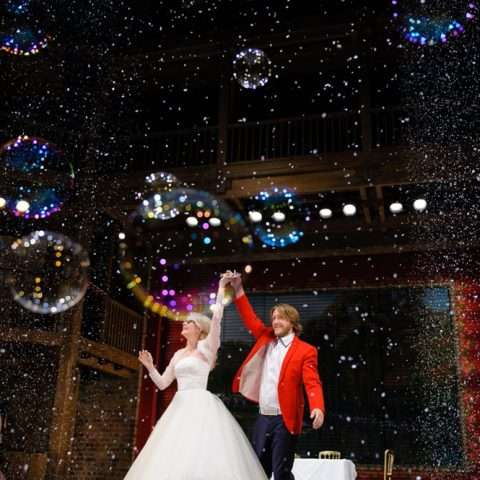 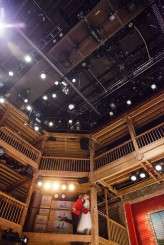 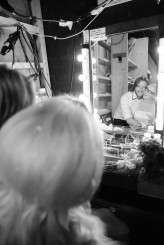 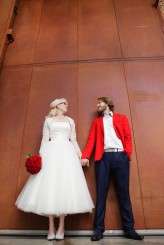 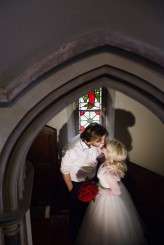 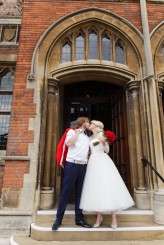 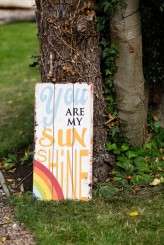 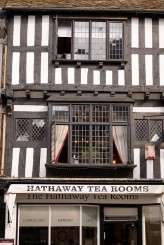 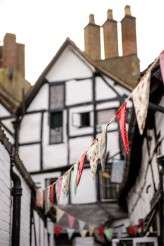