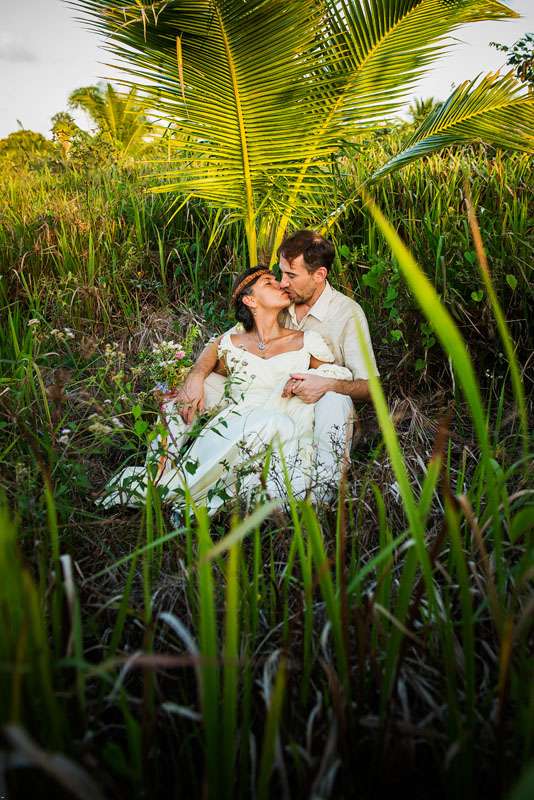 Sharon and Matt’s small Belize wedding at Honey Camp Ranch cost them just $5000. They avoided the usual trappings of a traditional wedding, instead choosing to do things their way. That meant everything was either borrowed, donated or homemade. The bride wore a custom wedding dress, made for her by her mother, and no shoes! She made the stationery herself and the flowers and reception decorations were collected from the local area.

This was also a completely unplugged event. There was no electricity, and no cell phones or computers allowed! The couple wanted their wedding to be a refreshing escape from their excessively electronic lives in the US. 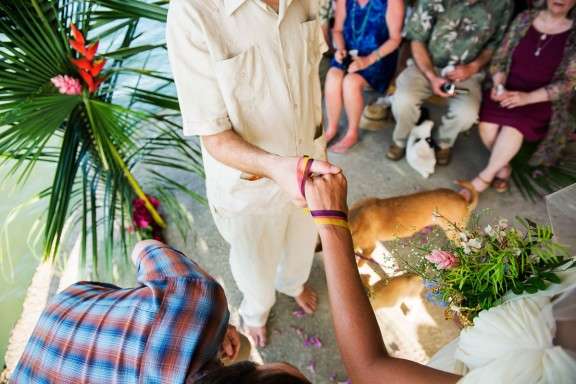 “The inspiration for the wedding was love for the nature of Belize”, wrote the bride. “The most unusual thing about our wedding was that there was no electricity. The natural sounds of Honey Camp Ranch and the romantic light of gas lanterns in the evening made the lack of electricity a huge beneﬁt and gave a better connection with the amazing natural environment of Belize – away and unplugged from the busy world. It was different from the norm because it was a destination wedding, was super low-key, and was in the jungle!” 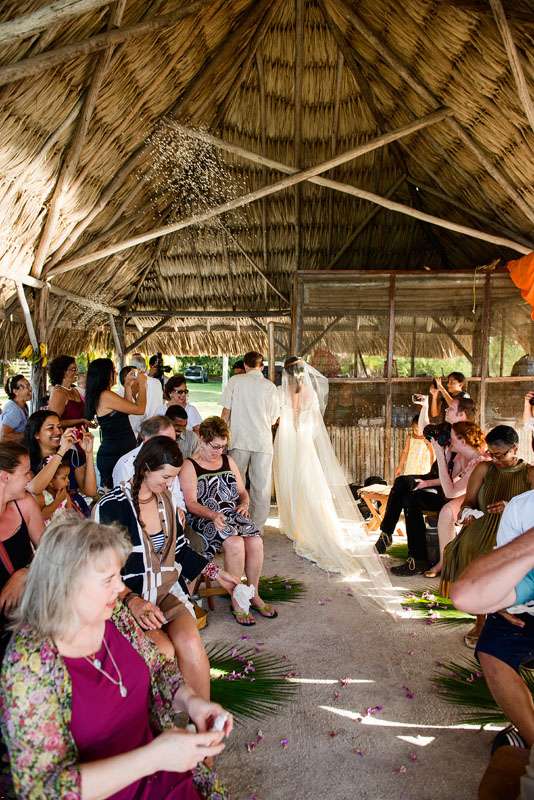 “The night before the rehearsal dinner we had a impromptu dinner feast at Honey Camp Ranch of lionﬁsh and garlic shrimp. We ate by light of gas lanterns on the long mahogany handmade dining tables next to Honey Camp Lagoon. This was an unscheduled event and it had a really spontaneous fun feel to it. The next night, the rehearsal dinner was a six course meal of Belizean street food – Salbutes, Empanadas, Garnaches, Orange Walk Tacos, Ceviche, and ﬂan for dessert. My husband and I were the only servers, bringing each course from the kitchen and sharing with our guests. They later told us how honoured they felt to be served by the bride and groom!” 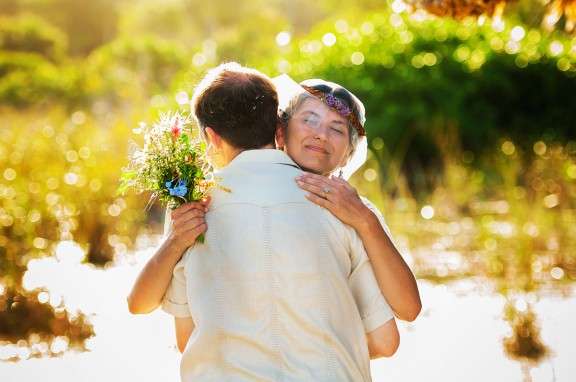 “Our wedding was natural, minimalistic, and delicious!”, she concluded. “We really were frugal in a simplistic and natural way. We went the DIY route every chance we could, and sourced all we could from the talents of the locals, our friends, and family. We spent two weeks before the wedding in the area and searched out all the local services we needed.” 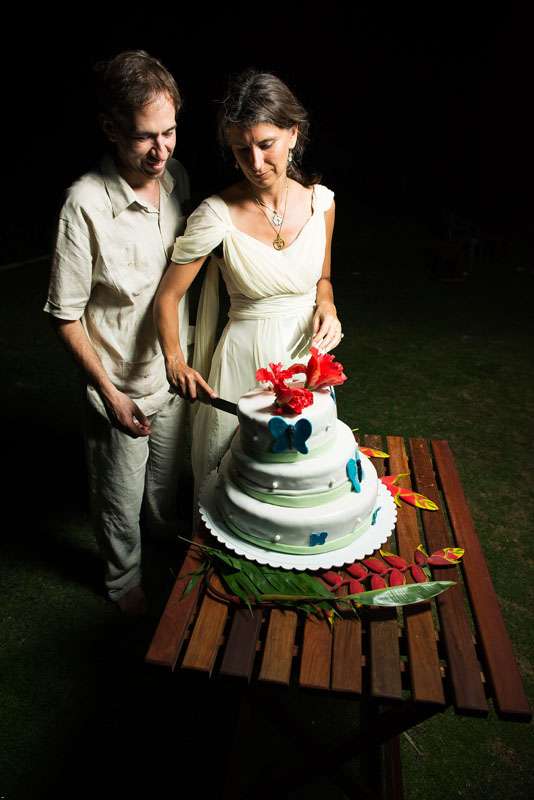 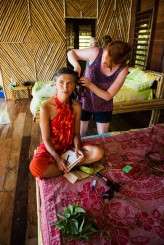 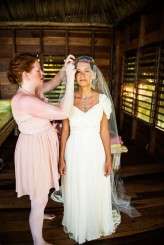 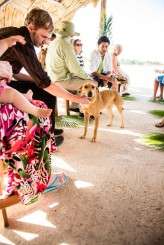 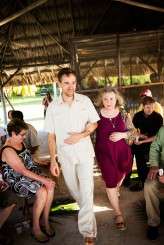 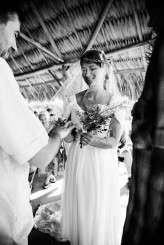 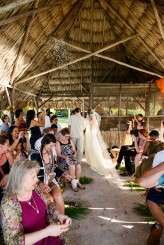 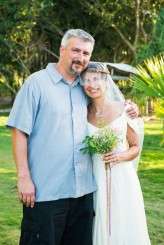 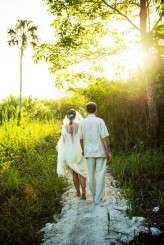 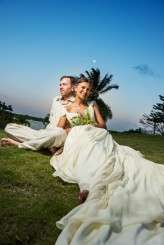 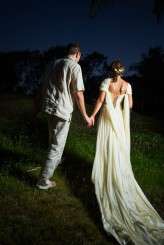 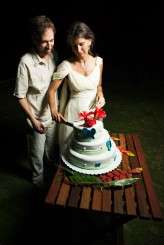 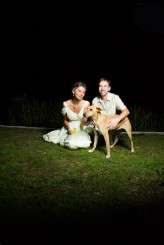 Marina & Phil wanted a small and intimate destination wedding in Maui. They love to travel and adore the water so a ceremony at Ali'i Kula Lavender Farm followed by an after dinner boat cruise was perfect! "We love the outdoors", Marina wrote. "In particular, we love picnics with a great view. That's what we ended up doing - a wonderful picnic on a mountain on a tropical island. We laugh that we could not decide whether to get married on a mountain or on a tropical island, so did both. We also decided to have our wedding on the 4th of July because we wanted fireworks!"

It's finally getting warmer which is making me dream of sandy beaches and tropical getaways. Jacqui and Peter's Costa Rican wedding is doing nothing to help my craving to hop on a plane!

If Marie Antoinette Had a Picnic Wedding at the Beach

Emma and Will rented a house for their June wedding and the bride's father married them on the beach. Their friends sang to them during ceremony, Emma's niece was their flower girl and she choose sequin dresses for the bridal party because she wanted everybody to sparkle!