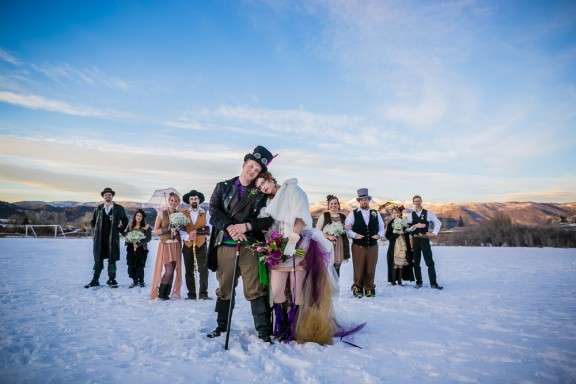 Spring has very much sprung over here in the UK. And as the daffodils start to line streets and parkways, I usually forgo featuring any obviously winter weddings. After all, who want to be reminded of the cold and bleak mid-winter when it’s so glorious outside?! Well Meghann & Nathan’s wedding was different. They were married in the Colorado Mountains, where snow is a pretty regular feature. They also had a steampunk theme and only spent $2000 on the day, making it a wedding that I just knew you guys would flip out about. So, yet again, my self-imposed rules are being broken today. Oh well! 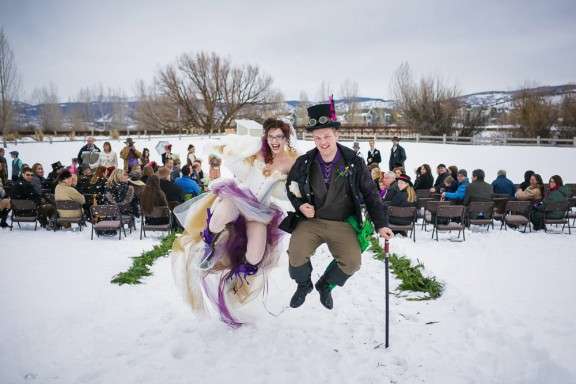 The wedding was held at Brush Creek Pavilion in Eagle, Colorado, and was planned by the mother of the bride, Jen, who runs her own wedding planning company, I Do Weddings. Jen did pretty much everything for this wedding, even so much as designing and making Meghann’s dress and headpiece herself! Nathan wore an outfit made up of things he already owned alongside a few items rented from a costume shop, and the bridesmaids and groomsmen were invited to wear anything they liked, as long as it fit them steampunk theme of course!

“Meg & Nathan decided to marry in a simple, local winter wedding in February and announced their plans to our friends and family shortly before Christmas”, wrote Jen, mother of the bride. “I wanted to find a way to help them host an event that really reflected their personalities. The steampunk theme allowed us to honor the love of drama that they share, and the result of the theme was a colorful, joy filled event.”

“Meg, being the quirky girl she is, wore tutus, corsets and high-top converse all through high-school. When she first started talking about a wedding gown she was uncharacteristically looking at plain white, a-line gowns. It took me a week or two before I was able to develop a concept for her and for the wedding that really suited them. When I sent her photo examples of steampunk fashion she lit up and I knew I had hit on something that was authentically her. I ordered a plain corset and embellished it with fabric flowers and rhinestone brooches. We finished it with an eggplant grosgrain ribbon to lace up the back. I made the skirt out of four different colors of tulle, with an eggplant on the bottom, gold as the second layer, an ivory with rhinestone and an ivory top layer. I bustled the skirt mimicking the style of Victorian apparel, leaving the front short to show off her funky old green boots. I made the dress two days before the wedding and she wasn’t able to see it on until moments before walking down the aisle in it.” 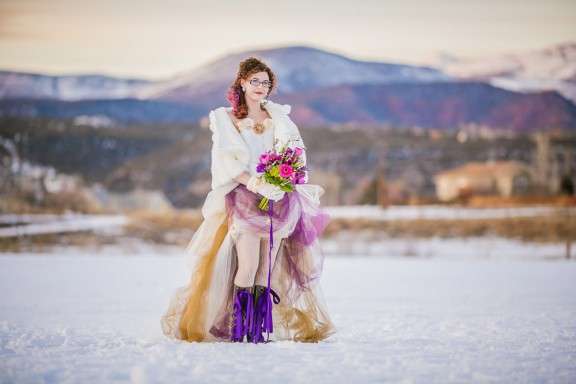 “We decided to have an outdoor wedding despite being mid-winter in the Colorado mountains”, she continued. “We encouraged guests to dress warmly, as they might if they were going to sledding party, and we provided them with blankets to use during the ceremony. Meg was escorted down the aisle by her step-father and grandfather, and we all heard her giggling before we saw her. The officiants were both Pastor Tommy Schneider of Calvary Chapel, their pastor, and the groom’s father, Scott Lubinski. The ceremony took only 20 minutes and we were all soon inside for hot cocoa and spiced apple cider. Food was available immediately, and the bridal party went outside for photos during the sunset. The dinner was a pot-luck, every guest brought their favorite dish.” 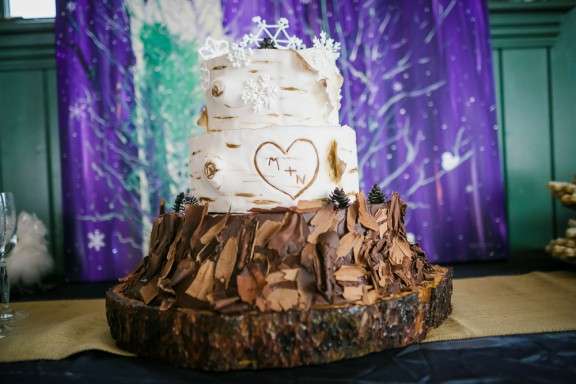 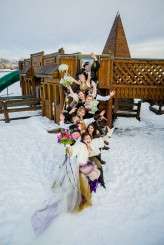