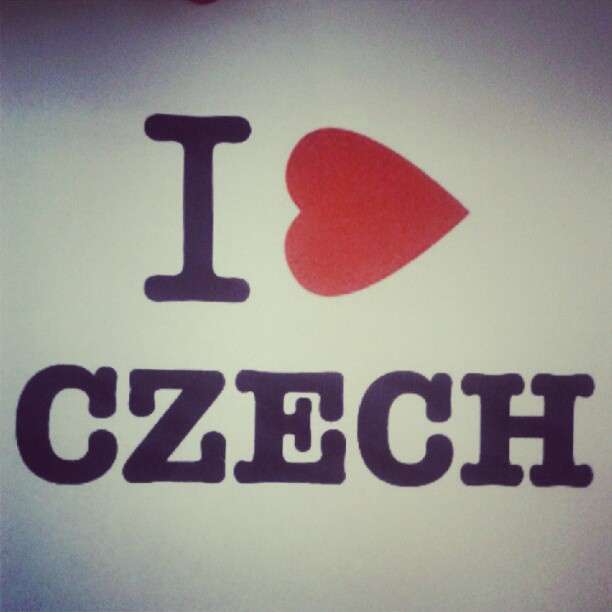 Disclaimer: I’m going to try and not make this post just a boring “er, wanna look at my holiday snaps” kinda blog post. Try I sad…

One of my goals for 2012 was to push myself out of my comfort zone more, and to travel as much as possible. I’ve never been a huge traveller, but I strongly felt that in order to broaden my horizons and provide more well rounded and interesting blog topics that starting to do more of it was important. So when Japanese travel and goth fashion blogger La Carmina, who I’ve spoken to online for the past 4+ years, asked if I wanted to join her in Prague for a few days I disregarded my feelings of trepidation and nerves and said hell yes! 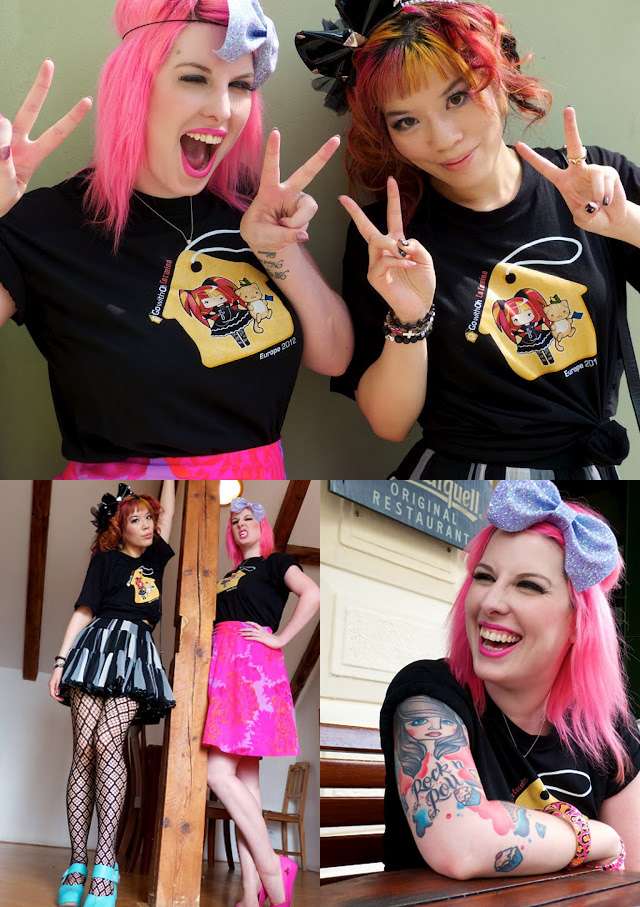 The trip was sponsored by Go with Oh who own rental apartments all over Europe. We were on the top floor of a gorgeous gothic-esque looking apartment building and despite the disruptive stag do over the corridor it was perfect! This was the apartment we stayed in. It was huge – a massive bedroom, two bathrooms, a reception area, a kitchen/lounge and an outside terrace! Especially after just getting back from New York and being hauled up in a teeny apartment, I felt like we were living like queens!

We had a view over the Vltava river and it was just a 10 minute hop skip and jump over the water to Old Town. 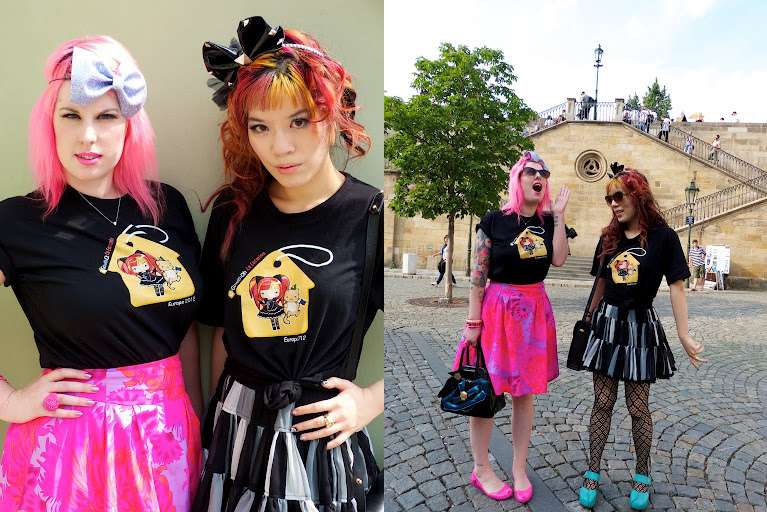 On day one we wore tee-shirts designed by one of La Carmina’s readers. I also wore the brightest skirt known to man, Vivienne Westwood flats and a Crown & Glory giant sparkly bow headband! I think I missed the memo about this being a gothic trip… 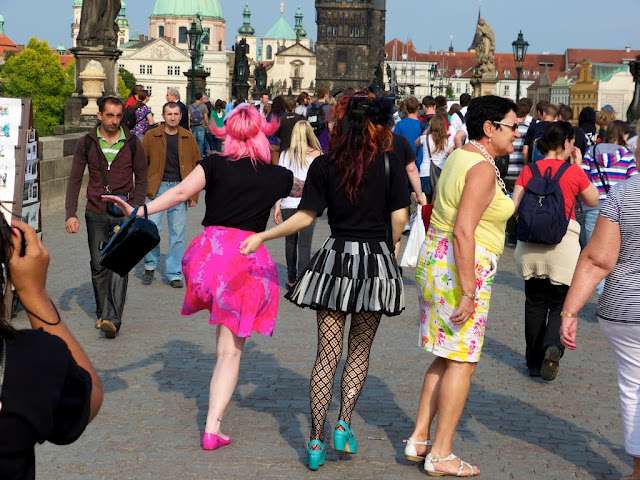 The Asian tourists loved us… 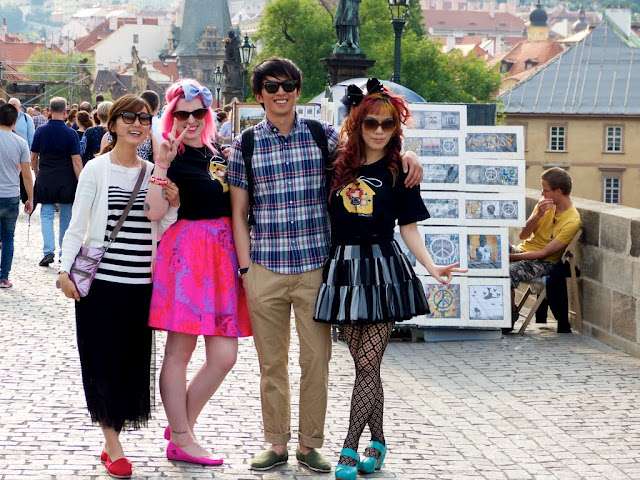 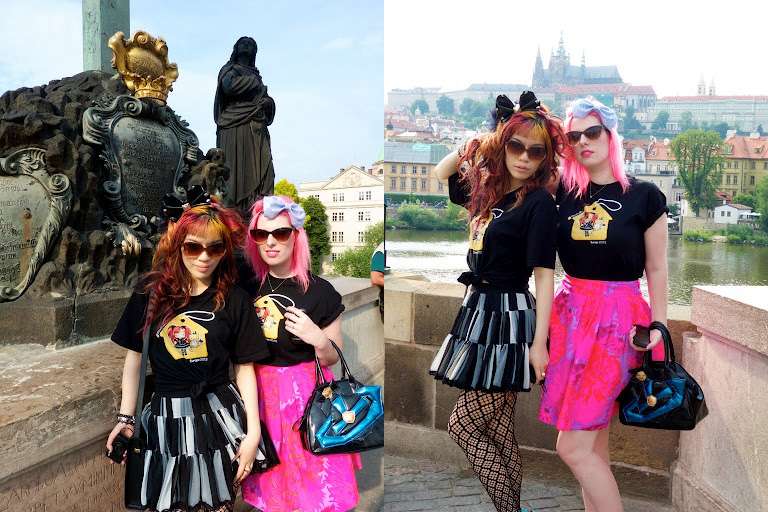 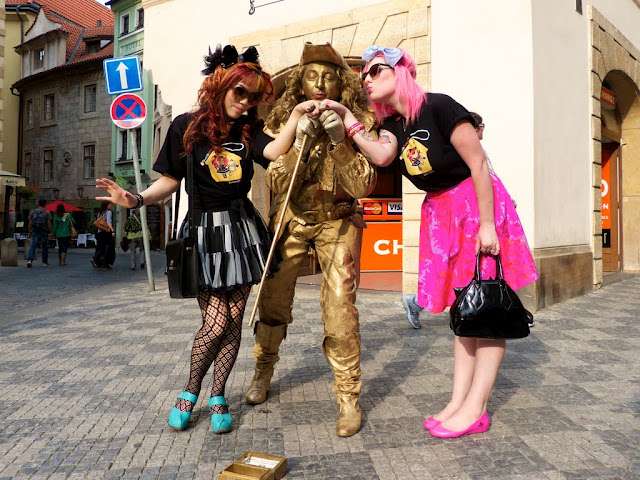 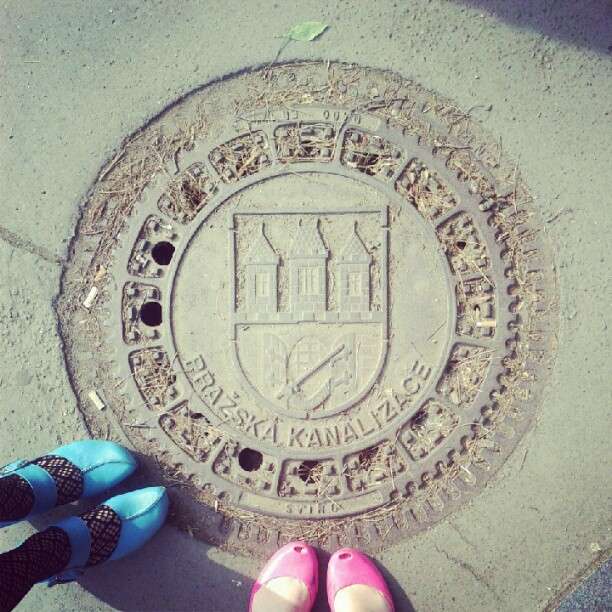 The Go with Oh team had planned various activities and must-sees for us, which we compiled into a short video (at the bottom of the post). I really loved our absinthe hunts (ha!) and playing dress up at the fabulous Dracula Clothing. 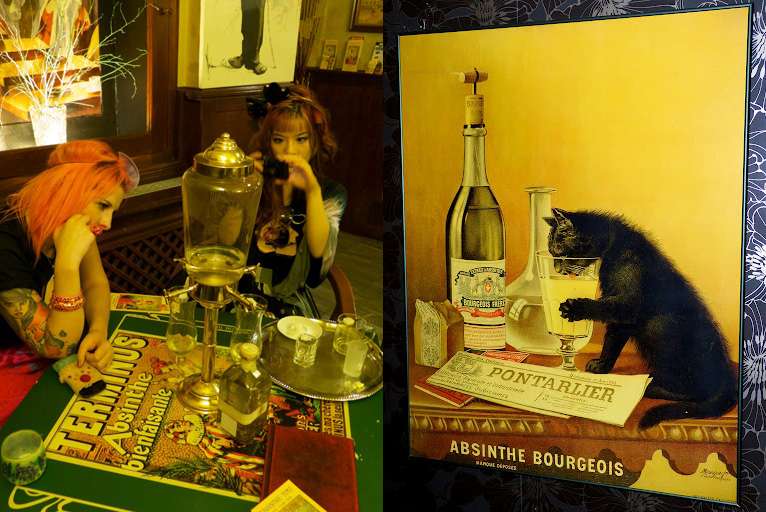 I promise I’m not as annoyed as I look here. I think I was just fascinated with the process of it all! 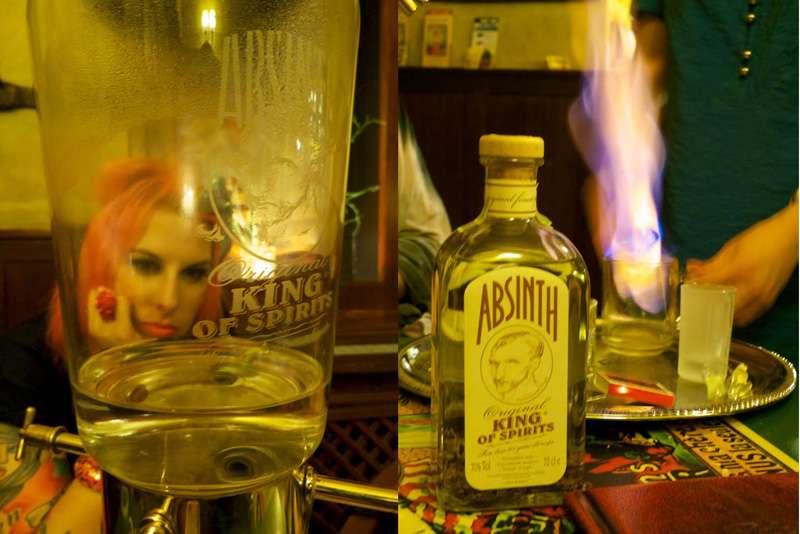 I definitely forgot about the goth-factor with my outfit choices. On day two I wore a Pepperberry dress and another Crown & Glory creation. This time a giant flower headband! 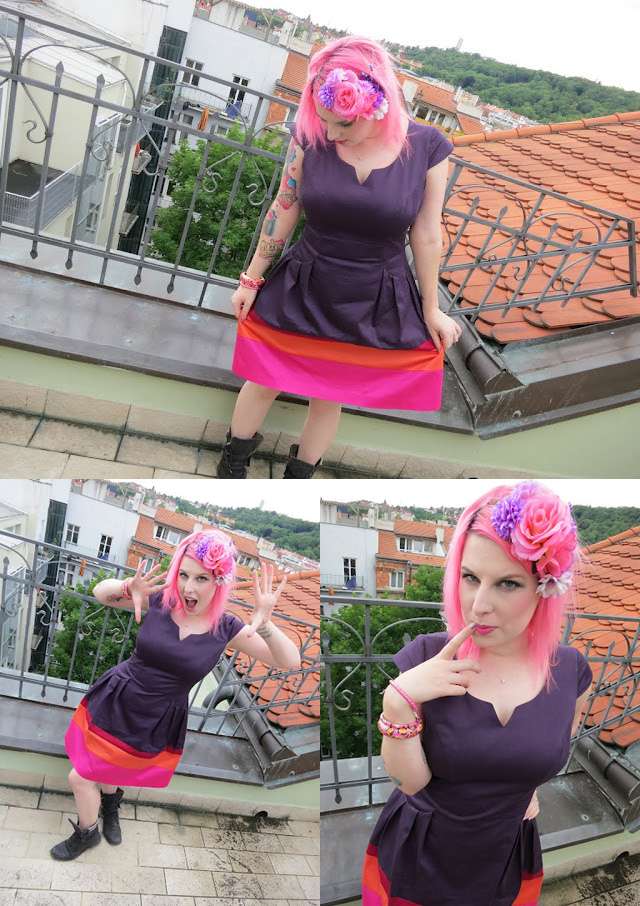 I got into the swing of it at Dracula Clothing though… 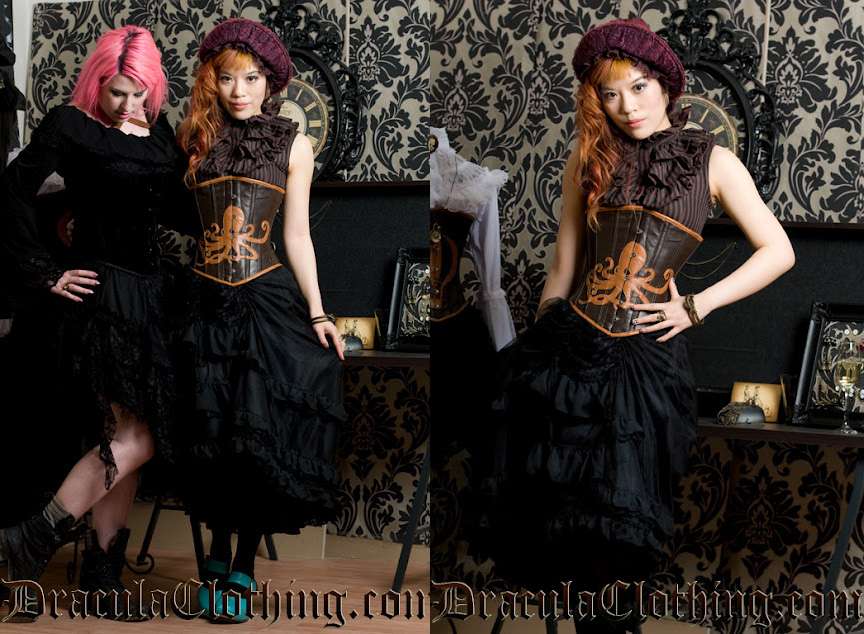 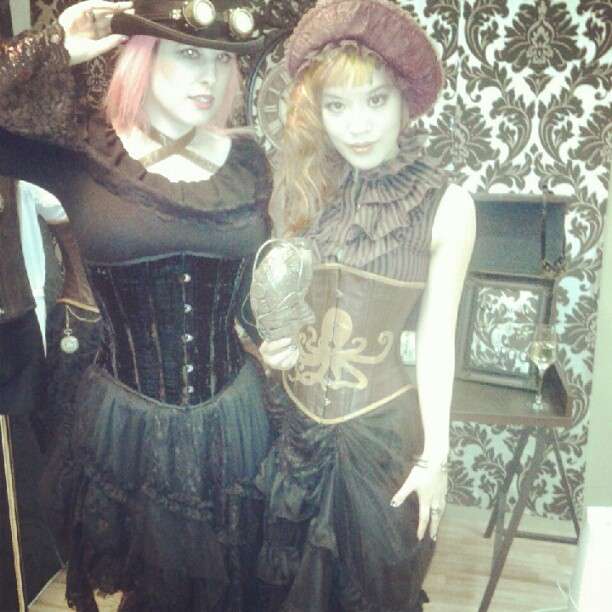 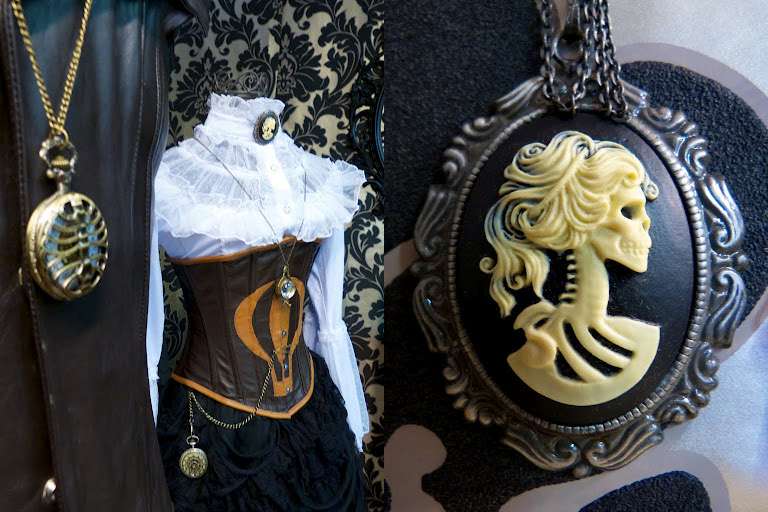 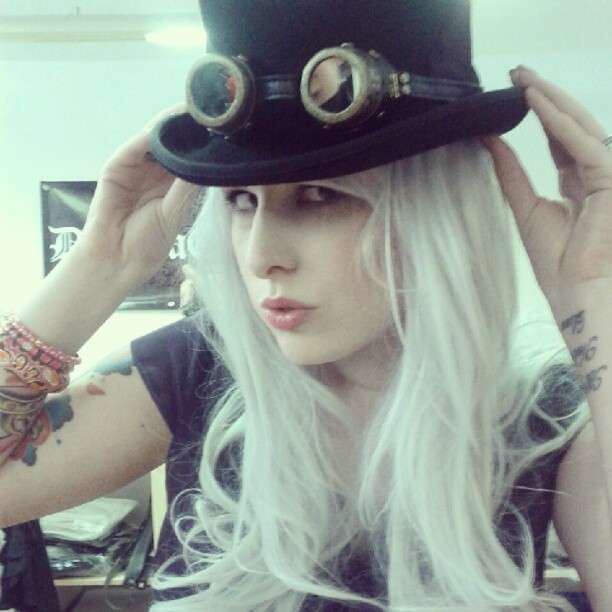 Our wonderful guides, Arno & Sara, took us to some of the must-see tourist spots (Charles Bridge was pretty amazing) where we tried to cause as much havoc as possible. Being on video camera is scary enough, but I just found out that it also got featured in La Carmina’s Huffington Post column! OMG!

We found plenty of time for more absinthe. The ice cream and cocktails at this bar were my favourite. I’d go back to Prague just to have them again… 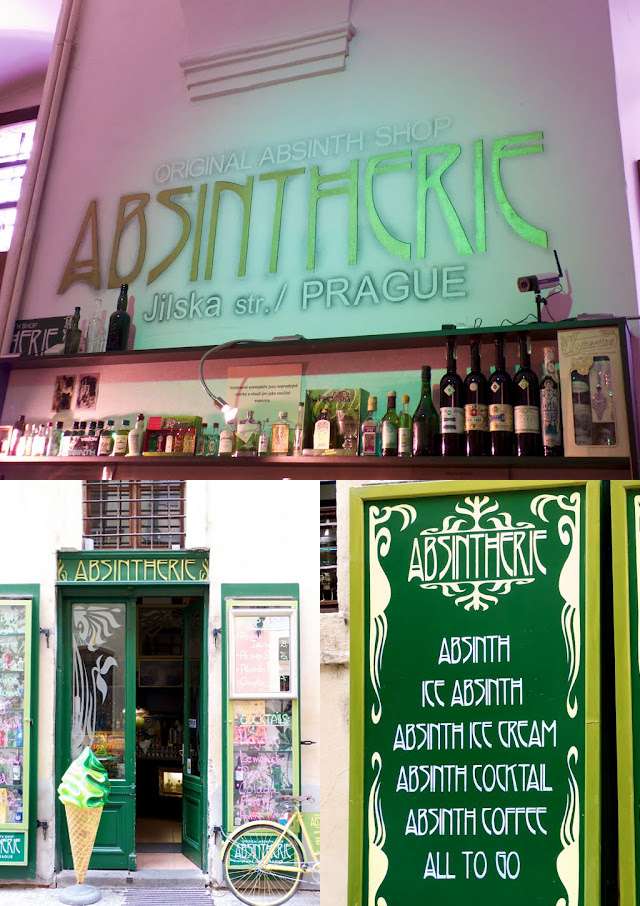 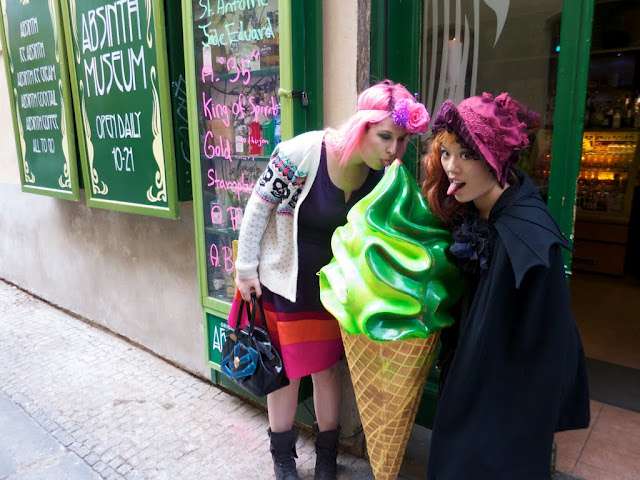 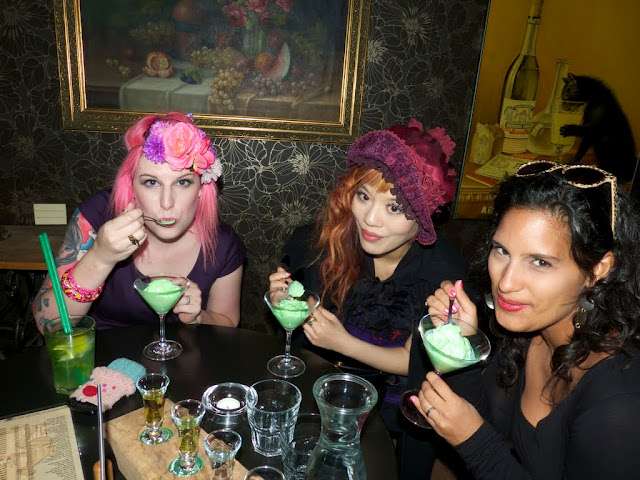 Truls & Ida from Dracula Clothing also took us to some underground goth clubs. We had to get a cab out of the city centre to get here. There were certainly no tourists in these parts! 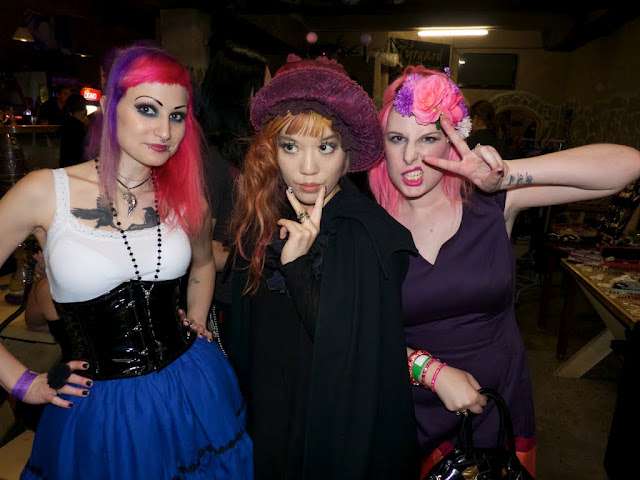 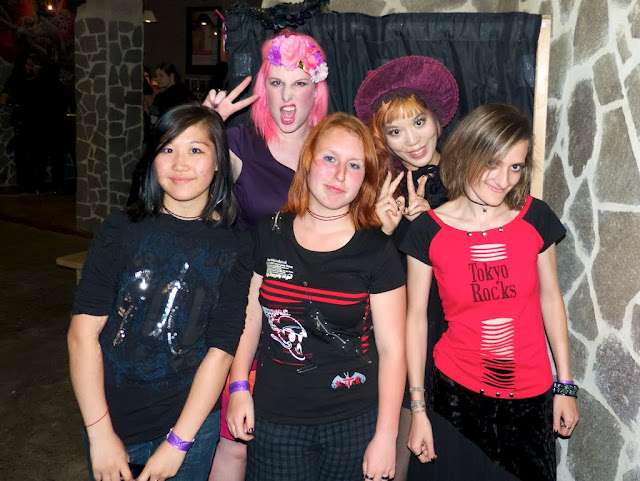 On our final day we headed up to Prague Castle which sits proudly on top of a hill, over looking the city. The gothic architecture was out of this world and it was obviously a prime spot for wedding photos. Czech weddings are like nothing you’ve ever seen and seemed to draw as much attention as the castle and cathedral! 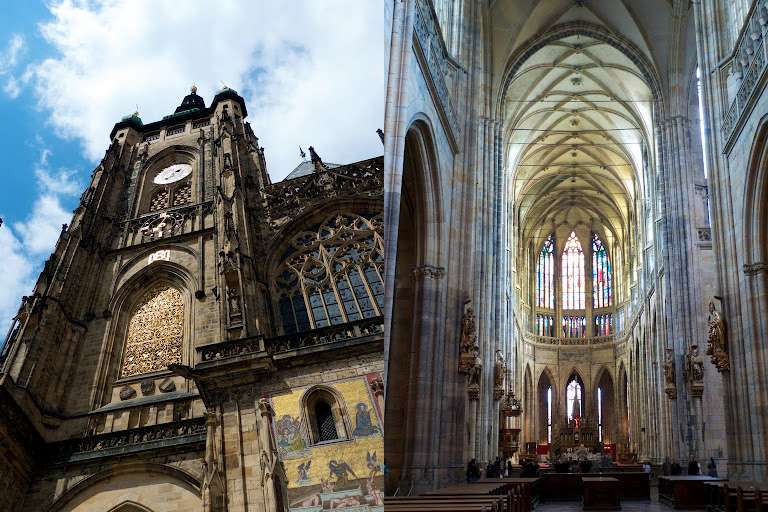 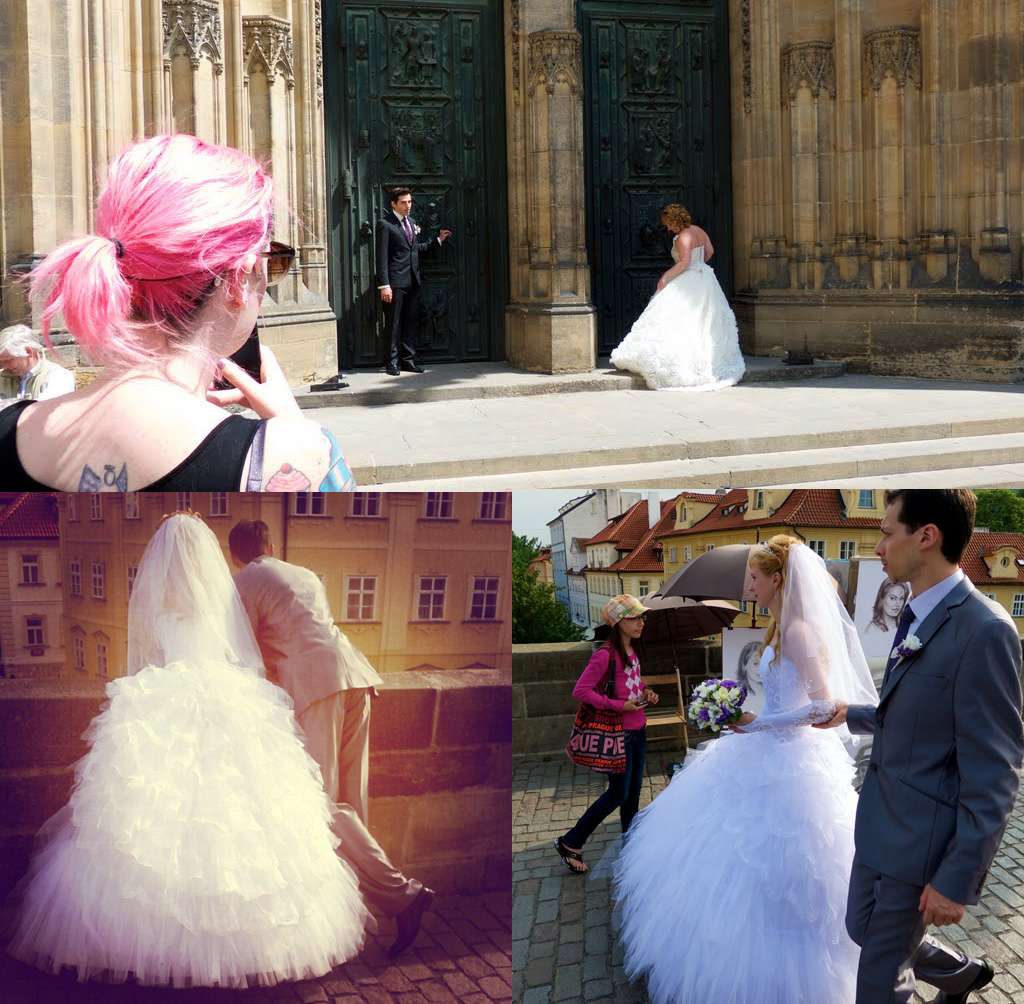 If you’re on the lookout for a European break with your beau or some girlfriends I’d 100% recommend Prague. A short 2 hour flight from London and you’re in absinthe, architecture and goth adventure paradise! My advice to you would be to avoid the super touristy spots (especially at night, the booze is so cheap it all gets a bit mental) and instead, have your own wild and spooky adventures!

Thank you  La Carmina and Go with Oh for a fabulous few days! I’ll be back soon!

On Friday Gareth & I packed up the car (again!) and drove down to Brighton (again!) for another School of Rock blogging workshop. The event was fabulous, my class were ace, and the whole thing left me with a warm n fuzzy feeling inside. As we drove away that night (slightly topped up with the celebratory after-workshop-wines - don't worry Gareth was driving!) I turned to him and gushed away about how incredibly blessed I feel. Like, how is this my life? As someone who tentatively dipped her little toe into the blogosphere all those years ago, I can't quite believe that people now line up to come and hear me speak about my journey. Like seriously... this is nutso. Even Darren Rowse of Problogger is singing my praises. Yeah no big deal or anything...

With Love from Paris

Because I just couldn't resist another sneaky share to quench the Sunday afternoon lull...

Phew, What a Trip!

Bonjour mes petits amis! Well I'm finally back at my desk after two weeks of non-stop craziness with The Blogcademy gang. And although I'm missing my girls like crazy, I have to say it's pretty damn good to be home. My head is spinning with everything that's happened over the past fortnight. In fact it's whirring so much that I'm struggling to even form sentences...

Sam and Jeremy's colourful wedding took place on November 2, 2019 in New Orleans, Louisiana. They chose Paradigm Gardens, a cute little urban farm next to the interstate, as the venue. Sam wore a Chotronette dress while Jeremy was in a custom suit by Harper & Jones and in lieu of a large bridal party they each chose one 'best person'.

Made You Look Studios

It seems like a lifetime ago, but just as I'm ramping up to head off to America again this week, Made U Look Photography sent over the photos from our Disneyland adventure in April. I'd never been before and on hearing this revelation Gala encouraged... nay insisted that they take me there for my birthday. Well who am I to turn down an invitation like that?!

Warning. You might not want to read this post if you're hungry... or on a diet. This is a unapologetic diet-sabotaging article!

Get Ready Austin, The Blogcademy is Coming!

Today I'm off to Austin for the final US Blogcademy of 2013 - can you believe that? We've done a bunch of American dates this year which has been such an adventure, but I am really looking forward to hitting London after this - it'll be nice not to have to get on a plane for once!