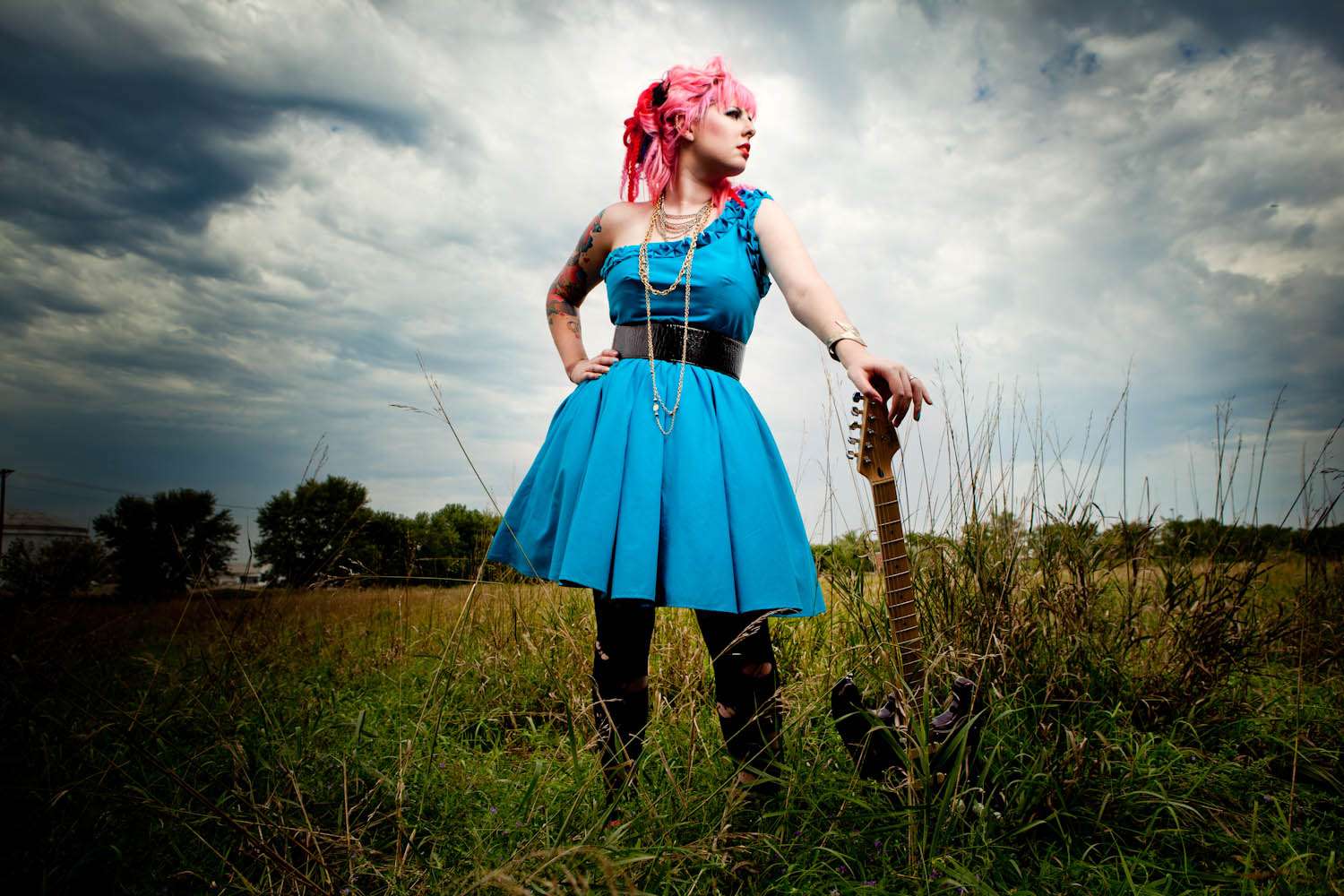 As most of you will know, I’m currently on my first American tour (OK it’s not really a ‘tour’ per-say as I’m only going to two places but that sounds fancy right!?) This past week I’ve been in Omaha for their annual fashion week. I was invited by the way-too-cool Megan Hunt better known as Princess Lasertron to model a limited edition Rock n Roll Bride dress (that she would design and make especially for me and the readers of Rock n Roll Bride) in her runway show to debut her Fall 2011 collection. She quite frankly didn’t have to ask me twice. I grabbed Gareth and we hot-footed our way to the US of A.

I love Omaha. When I told people I was coming here most of them said ‘Huh? Why are you going to Nebraska?!’… and similarly many people I’ve met here asked me the same question (!) but seriously I love it!

I love the crazy-wide roads, the cobbled streets of the Old Market, the vintage, thrift and antique stores and the tattoo shops that are open past midnight. Plus Omahanians have to be some of the friendliest and coolest people…and seriously, if it’s good enough for Gaga…

I’ll be blogging photos and video from the fashion show, all about working with Megan, meeting Mondo Guerra from Project Runway, the dresses, the photo shoot for Esoteric Velvet Magazine (lil teaser pic at the top of this post – we also set fire to and smashed up a guitar!) and other general Omaha loveliness when I return to the UK, but for now I wanted to share the video of my American television debut!

I nearly fell off my chair when Megan emailed me to let me know we’d be invited on The Morning Blend tv show. I’m still a bit shell-shocked (in a good way) by the whole experience (you’d think that 5 years working as a television producer would harden me to tv nerves but no!) so I’m just going to keep this post short and simple and let you get on with watching the segment.

I hope you enjoy it!

(Watching it back is mortifying…I totally stumbled over a few words (Americans talk fast!) and yes I said ‘peers’ coffee instead of ‘pears’ when reading from the autocue at the end. Cringe! Sorry Omaha…time to get my peepers tested again methinks…)

‘Rock n Riot’ – Behind the Scenes Photos and Video

First of all, a big load of love to everyone who took the time to comment, tweet, facebook or email me about the ‘Rock n Riot’ shoot yesterday. As ever I have been blown away with your love and support. I’m thrilled with the results but I always have to go one step further huh? So today I have the behind the scenes shots from Emma Case and video awesomeness from Pete Smyth & Simon Clarke to share. But that's not all, the styling genius that is the Ava team have also kindly popped by to explain a bit more about how they executed this epic (this word keeps cropping up in relation to this shoot…but seriously, I don’t think anything else could describe it as well!) styled shoot.

You may have seen me talk about Bitchless Bride before, especially on twitter. She is my new wedding industry hero! The alter ego of a wedding planner (and no, even I don't know her true identity!) who was sick to death of crazy bridezillas and mental wedding vendors, she set up her blog to give it to us STRAIGHT. I loooove her. She's a hoot. And hell, she rocks a pink wig. We're definitely destined to be BFFs. I just about wet my pants with excitement when her video guest blog landed in my inbox. Some exclusive Bitchless Bride on Rock n Roll Bride?! Hell. Yes. We are a match made in wedding heaven. Listen up brideys, listen up wedding suppliers, cos Bitchless is about to give it to you. No holds barred.

Stop and Pay Attention to the Little Things…

This wedding video has a pretty intense intro but I utterly love it. Wow, what a beautiful way to share a wedding... "It's definitely not your typical wedding videography, and be warned, the first 56 seconds are a bit intense for some", wrote the wife of photographer and film maker Dallas Kolotylo who sent this my way.

Bitchless Bride is back! And today she wants to remind you why you're getting married in the first place... in her own inimitable fashion naturally. When it all gets too much, step away from the wedding planning people and remember the lurrrrrve.