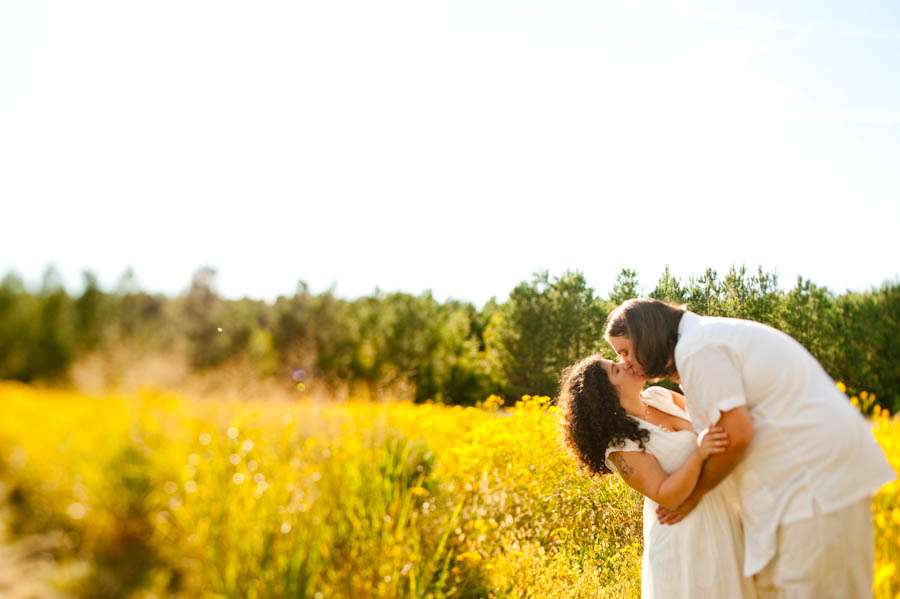 Rissy & Mike’s wedding was a real hippy and family affair. They involved everyone that was important to them in order to make it totally perfect. First off, Rissy carried their son, Casey down the aisle with her. “I was wearing Casey in a sakura bloom sling,” Rissy explained. “Wearing him down the aisle and during the ceremony was very important to us because we wanted him to be with us as we all became an even closer family. We also practice attachment parenting which puts a lot of emphasis on the importance of baby wearing.” 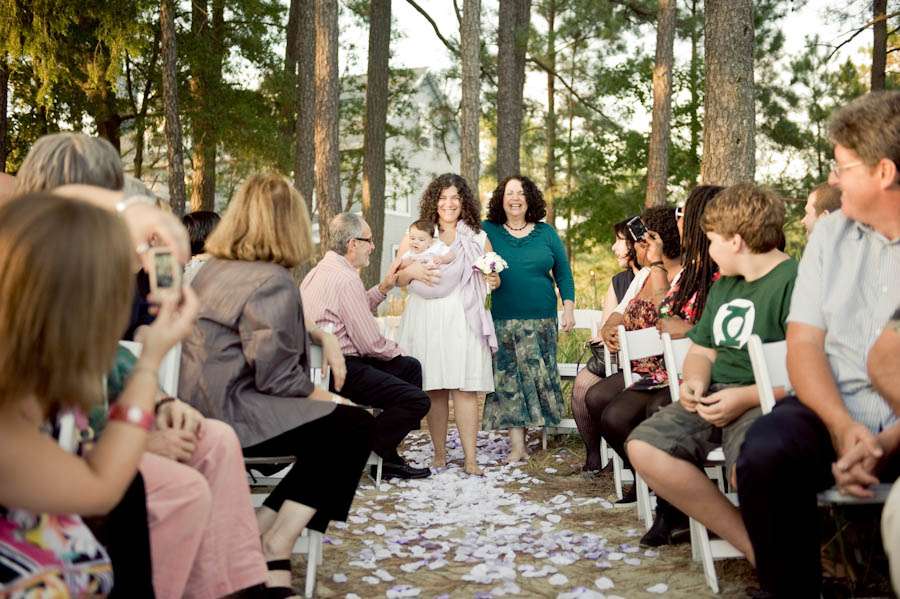 With having a young baby, it was hard for the couple to go out and buy everything they could for the wedding, therefore about 99% of their wedding supplies were bought online. “Clothes and decorations pretty much everything else as far as decorations I bought at Anthropologie  and World Market,” Rissy continued. “I didn’t want to hire a wedding planner as we didn’t want to pay for one and I really wanted the event to be “us”. I felt like I could do it best. The few things that were really important for us to have was an outside wedding on the water or in the woods and a dress that buttoned down the front so I could breast feed in my dress.” 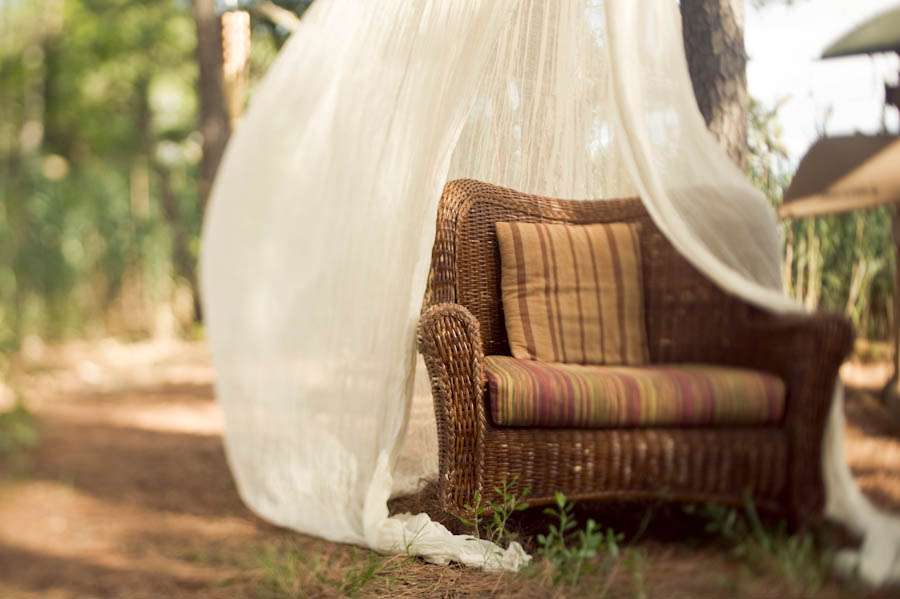 The venue and vibe it created was also very important to the couple. They explained, “At first we wanted to get married on Assateaugue Island, this cool tiny island in Maryland where there are wild horses that just roam free. Originally we wanted to turn the wedding into a whole camping weekend but with resistance from the older generation and with complications with reserving campgrounds, we changed our plans. We wanted it to be outdoors and have some privacy so we searched online for vacation rentals on the eastern shore and found the most amazing beach house called Cambridge Beach House. It sleeps 22 people, has a great kitchen, a pool and bbq, a private dock and beach, it came with the use of three boats and five bikes, we had a blast there, and never wanted to leave.”

The couple added their own touches house to suit their own style and Mike organised a BBQ for the meal to keep with the relaxed, party environment. 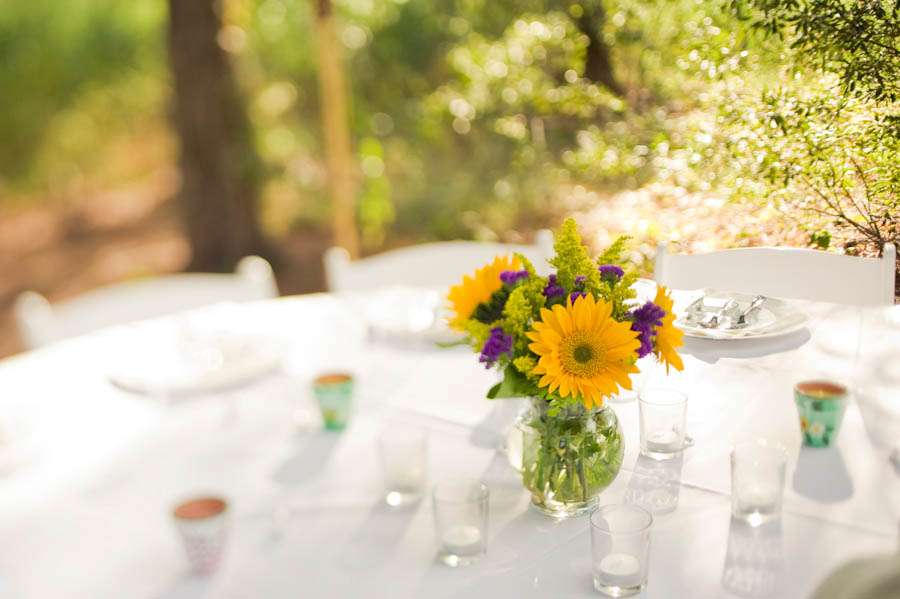 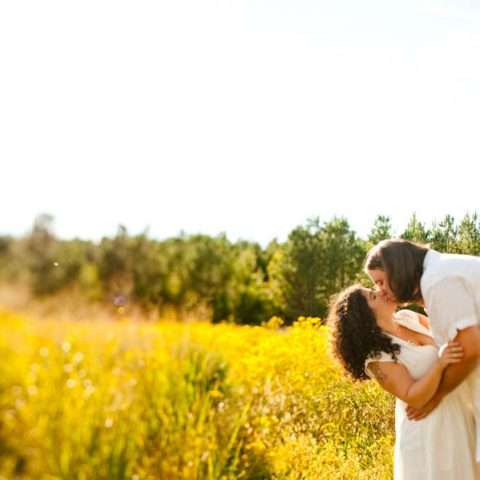 Amber & Jo's art gallery wedding was held in downtown LA. They kept things informal and low key, really wanted to focus on the ceremony and hoped to create a real community feel. "We wanted our wedding to be a representation of the things that are important to us and that we love, so we put a lot of thought into the details of the wedding", explained Amber. "We tried to create an experience for everyone that would be a memorable celebration of our love for each other and for our friends and family. Our venue, ArtShare, a non-profit that supports low income youth to get involved in the arts, was perfect in that it allowed us to support a great organization while also providing the perfect physical space. The venue is part warehouse (reminiscent of some of the great downtown LA parties we've been to); part art gallery, which created a lovely reception space; and part theater, where we had the ceremony. It also provided a great spot for photos, with the downtown LA skyline in the background and that uniquely LA combination of colorful murals, graffiti, historic buildings and palm trees."

Kati & Hilal's wedding made me squeal with delight. It may have primarily been her custom made Skin Graft gown, her L.A.M.B shoes and her dreads that made me so excited, but alongside this inital visual feast, the whole laid back ambiance, feel and ethos of the day really makes me happy. Kati explained her choice of dress: Basically, it came about like this: I had seen and bought a few individual pieces of Skin Graft attire during the past few years, and then I noticed that they had a few weddings (within their "gallery".) I started an email conversation with them about a year before the wedding. (Skin Graft consists of 3 core designers and at least one wedding/custom gown assistant. I envisioned the outfit with Cassidey (one of the core 3) and then he passed me off to Amanda (wedding attire assistant) who finished the project off. We discussed different types of dresses they had already made, and different things I liked/didn't like. They sent photos of previous work, and drawings of my potential gown back and forth via email. I was measured in San Antonio, and sent the measurements to LA. When I received the dress I had to have it altered a little, but Skin Graft reimbursed me for the alteration fees.