Well this ‘Bride of Frankenstein’ wedding is right up my street…the gorgeous gothic details throughout are rock n roll perfection! After deciding their theme, the couple’s first port of call was the photography and decided to go with the fabulous Beth Herzhaft.

The Bride, Sarah, describes their vision, ideas and kick arse attitude…
We wanted our wedding to feel like you just stepped out of a romantic novel (not Jackie Collins and Fabio, but Robert Browning, Edgar Allen Poe and Mary Shelley—hence all the images of the Bride of Frankenstein, and Frankenstein’s Monster)

My gown was an ivory lace mermaid-style Monique Lhuillier.  I chose ivory lace because I wanted everything to look antique.  The black sash and black shoes added to the gothic romantic feel.  The bouquet consisted of dark burgundy flowers–which were as close to black as we could get, and he base was wrapped in black velvet ribbon.  I changed into a white Betsey Johnson party dress, which matched the black Betsey Johnson party dresses my bridesmaid’s wore.  I removed the sash from my gown and then wrapped it around my dress.

Centrepieces at the reception resembled objects left in a garden which had become overgrown with baby ivy.  Some centrepieces were candelabras, while others were bird cages.  I wanted to have birds inside the birdcages, specifically, crows, but my Mom drew the line there (she sure did a lot of line drawing, which is why my dress wasn’t black).  My grandma made my veil, which was cathedral length ivory tulle, outlined by ivory lace, although I did place a giant burgundy lily in my hair for the reception.

Images of the Bride of Frankenstein were projected onto the curtains during the ceremony and the aisles were lined by gothic candelabras of different shapes and sizes, so that the ceremony looked like it took place in a dark mission, or gothic cathedral.

John’s socks were black with white skull and cross bones, which matched his black enamel cufflinks with mother of pearl inlay skull and cross bones.  He wore dress shoes and a tux for the ceremony, with a black tie.  For the reception, he changed into black Converses, took off his jacket, loosened his tie and rolled up his sleeves.

First dance was to a Rancid song–couldn’t bear to slow dance to something cheesy, while everyone watched us.  We danced for 30 seconds before we grabbed all of our friends and invited them up to the dance floor with us.

My brother played with the band, “Viva Las Vegas,” “White Wedding” and “Don’t Let me Down,” just after he roasted us–no sentimental toasts here.

Cake, by Rosebud, was made to look like a giant cake topper of the Bride of Frankenstein and Frankenstein’s Monster affectionately gazing into one another’s eyes.  We used a cleaver to cut the cake, or, should I say, to decapitate it.

We had an old-fashioned black and white photo booth.  “Sarah and John’s wedding” was printed between each image on the strip of photos.

Vodka luge was carved to look like the image of the Bride of Frankenstein and Frankenstein’s monster which also appeared on the invitation.

1000 white cranes were scattered throughout the trees in the courtyard where the cocktail hour took place, in honour of John’s Japanese heritage.  John folded each one.

We did a lot of things DIY, including the invitations, menus and escort cards.

How faaaabulous! A huge thank you to Beth for sending these my way (and to Melissa Allen at The Ebell in LA for referring her..I am honoured!) 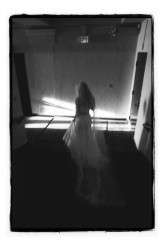 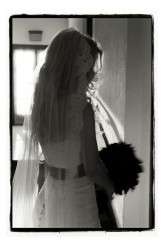 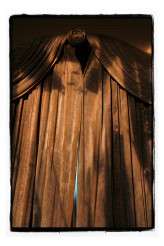 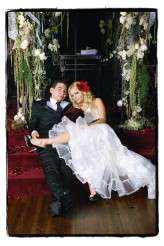 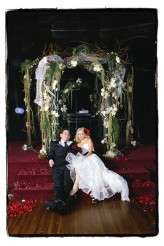 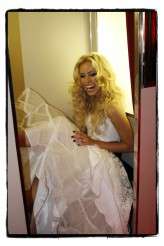 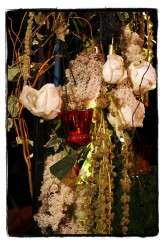