I love featuring weddings from the UK. Have a gander at this little beauty sent in by British photographer Phillip Allen.  They look like that had a lot of fun…

Petia and Chris married in March at Poole Guildhall in Dorset, UK.
One of the most exciting aspects of the day for me as a photographer
was a beach landing they made at Studland on the Isle of Purbeck,
where their reception was held. After the ceremony they sailed out of
Poole Harbour on a 40 foot yacht with family and close friends (who
own and crewed the yacht) with a small outboard craft trailing
behind. As we approached land, bride, groom, photographer and yacht’s
skipper alighted the outboard and headed for the beach. The water was
somewhat on the nippy side it not quite yet being Spring in the
region but it added an exhilarating stimulus to an already exciting
method of moving between wedding ceremony and reception. Prior to the
big day I’d been researching Robert Capa’s beach landing shots,
though thankfully we weren’t under fire on the day in question
itself! A friend did retrospectively suggest adopting the approach of
Method Wedding Photography though, stating that I should have ordered
the groom (and by consequence the bride) to hit the surf face down! 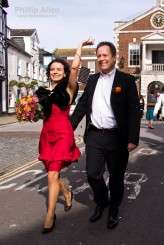 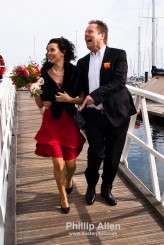 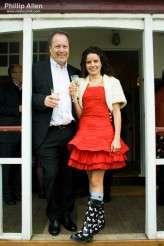