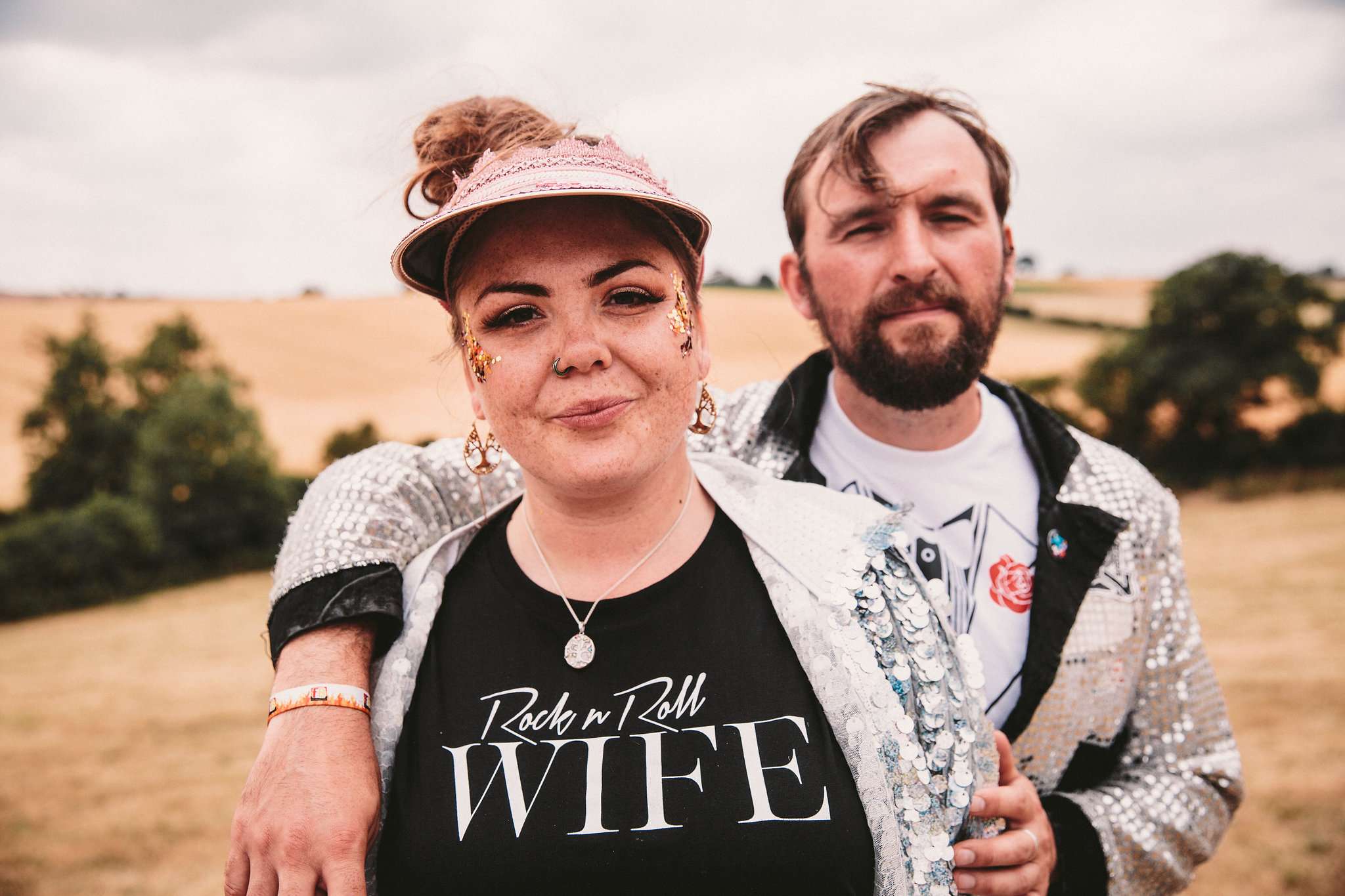 This is the kind of wedding that you wish you’d been invited to – it looks like it was a riot of fun from start to finish! Rachel and Scott were married on the 20th at Festival 8 in Lincolnshire. Their ceremony was officiated by Sean Atkinson, the festival organiser!

“Our budget wasn’t set out from the start”, began Rachel, “but we knew we weren’t going to go overboard. All in all we spent £4,000 for a three-day wedding. This included EVERYTHING! Venue, food and Pimms for 85 guests, all our outfits, tents, the marquee, gifts for bridal party… the whole shebang!” 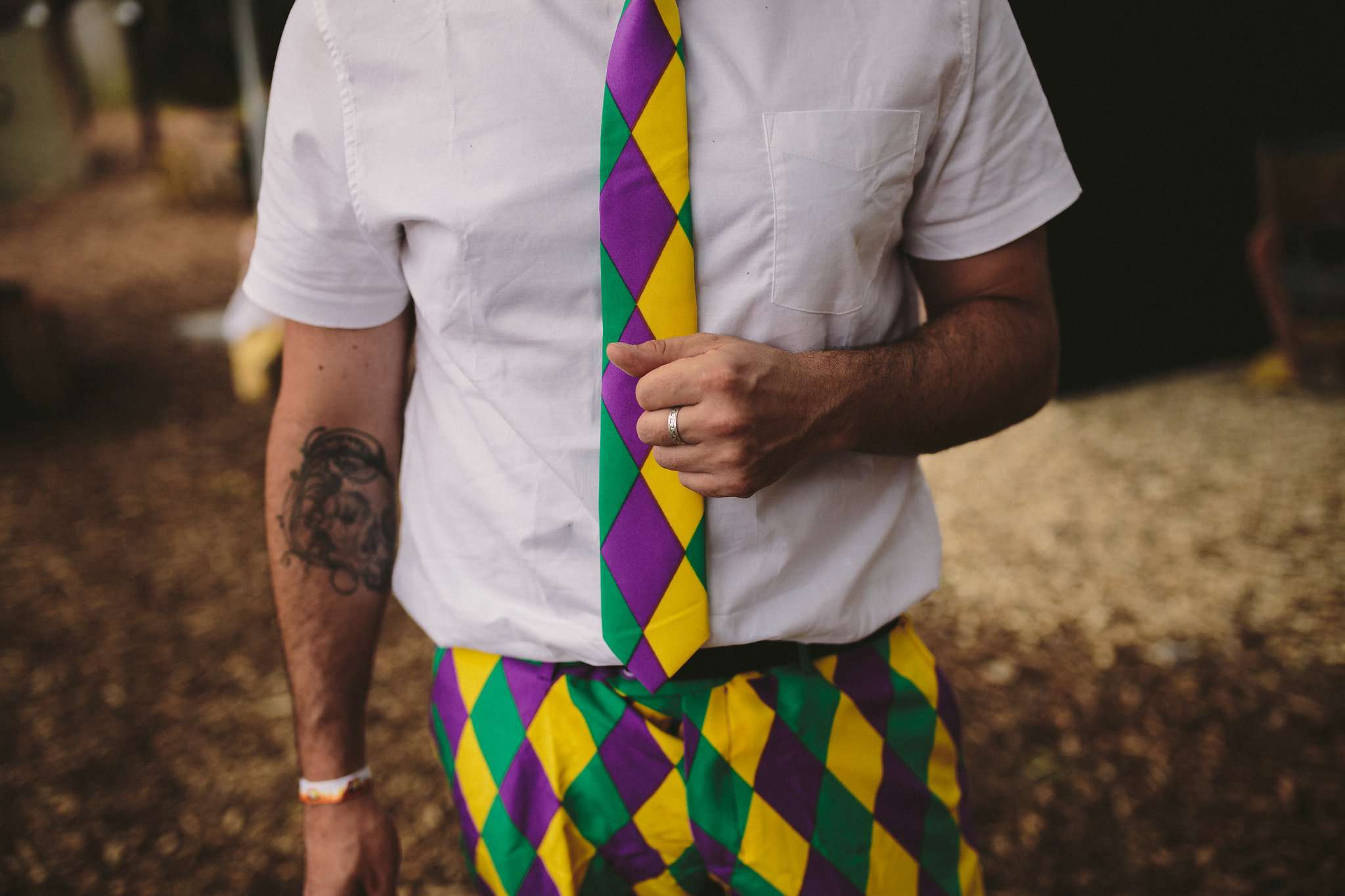 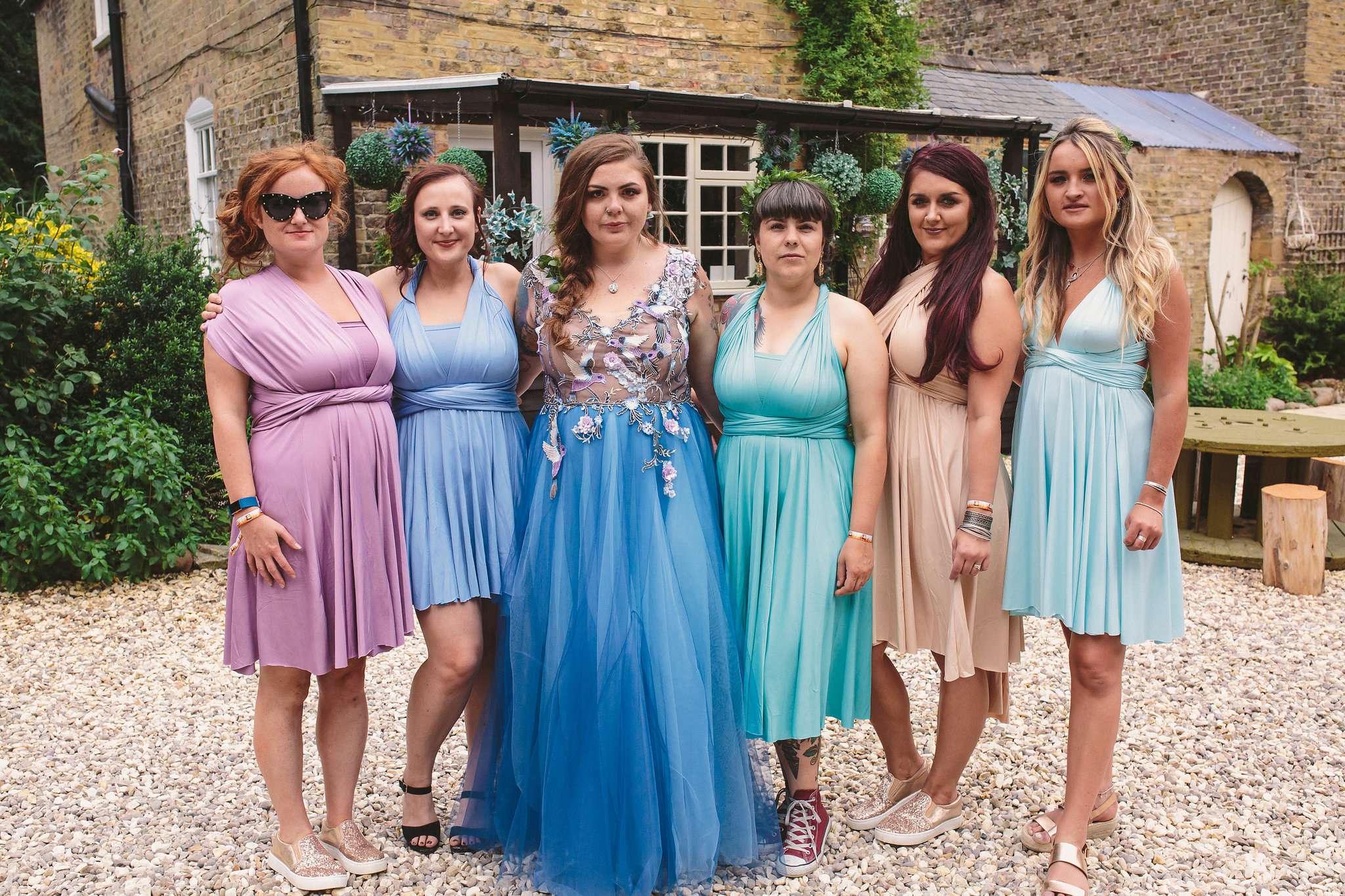 Rachel’s stunning blue dress came from Chotronette and her shoes were found online for £10! “I can’t remember where I bought them from, I just knew I wanted a flat platform to give me height without feeling like I was wearing heels and not worrying about sinking in to the grass! I had a military hat made bespoke to me by Katy May at Super Trooperz on Etsy. I gave her a colour scheme and a few key things I wanted it to include (reversible sequins so we could create silly drawings and I wanted it to light up in the dark). I took it on my honeymoon and wore it to death!! I loooove it!” 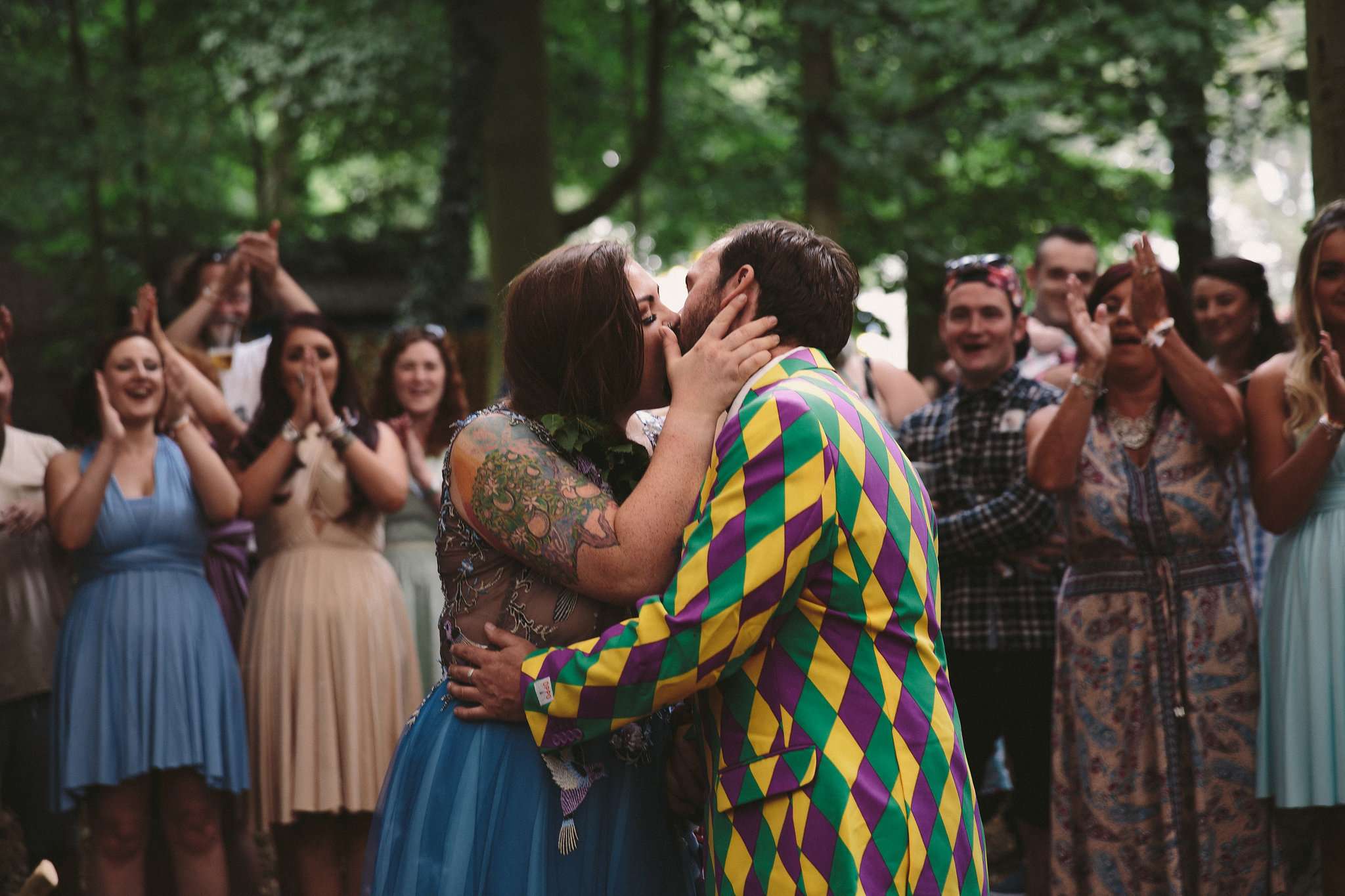 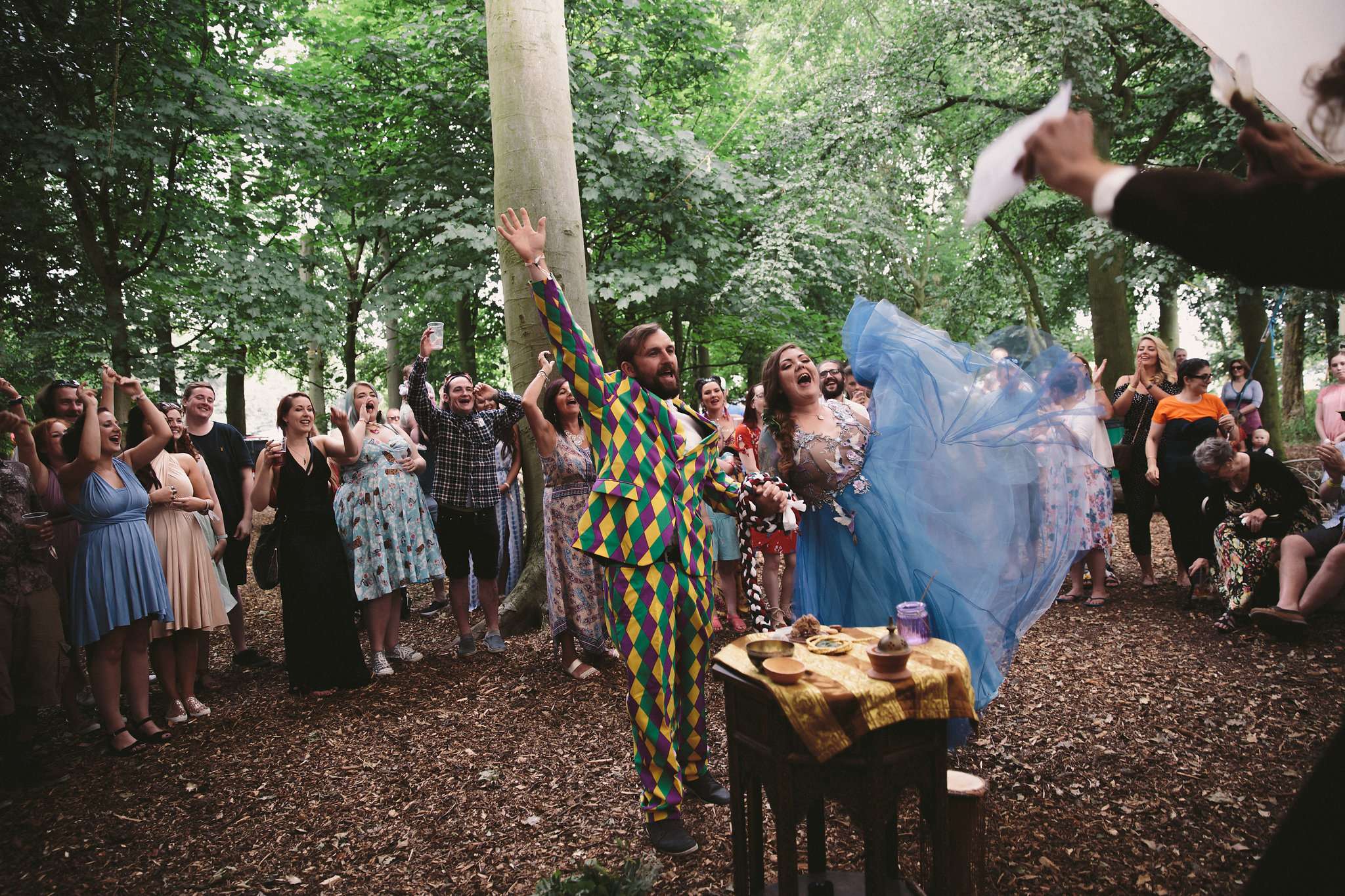 “A family member did our hair in exchange for tickets and my sister-in-law did my make up. My my sister made the bouquet and hairpieces so we saved a lot of money there. Due to the wedding theme, heavy make up and perfect hair was never a concern for the bridal party – we’re all very laid back lasses thankfully! Various outfits we wore over the weekend included our visors and my earrings which were from Savannah at Gypsy Blood who had a stall there and I continue to buy her amazing festivals accessories. I also won a competition with Rock n Roll Bride the year before and took my mum and sister with me for a shopping trip of £2,000 at Bicester Village Designer Outlet. Amongst other things, I bought them each a pair of Hunter wellies just in case (but thankfully they weren’t needed!) I found my new favourite designer Anya Hindmarch there and got a No U-Turn clutch purse too. I also wore a sequin cape which was a absolute bargain from Dolls Kill, who are my new favourite online retailer; and of course my Rock n Roll Bride tee! I wore the Anti-Bride tee on my hen do too!” 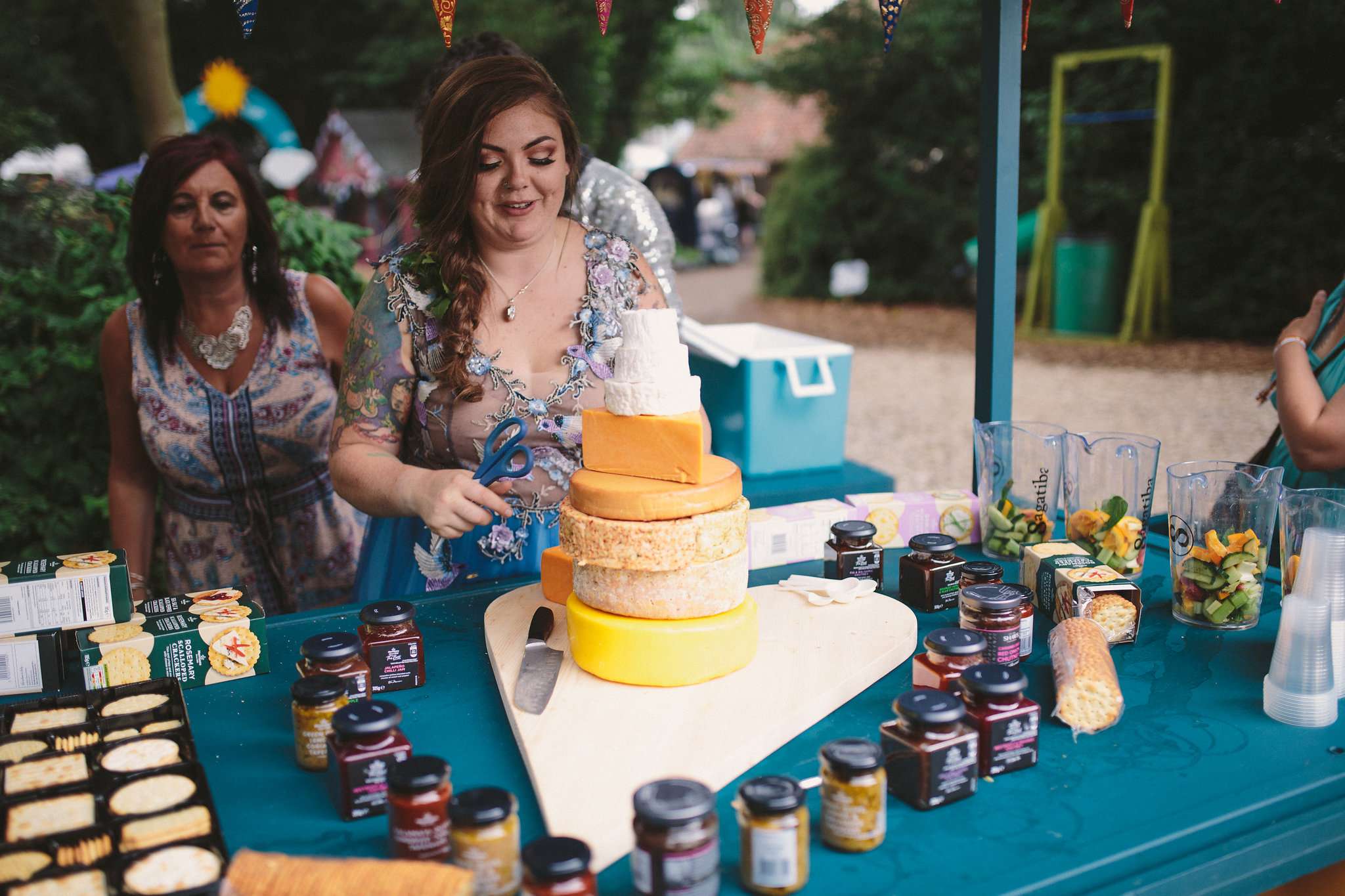 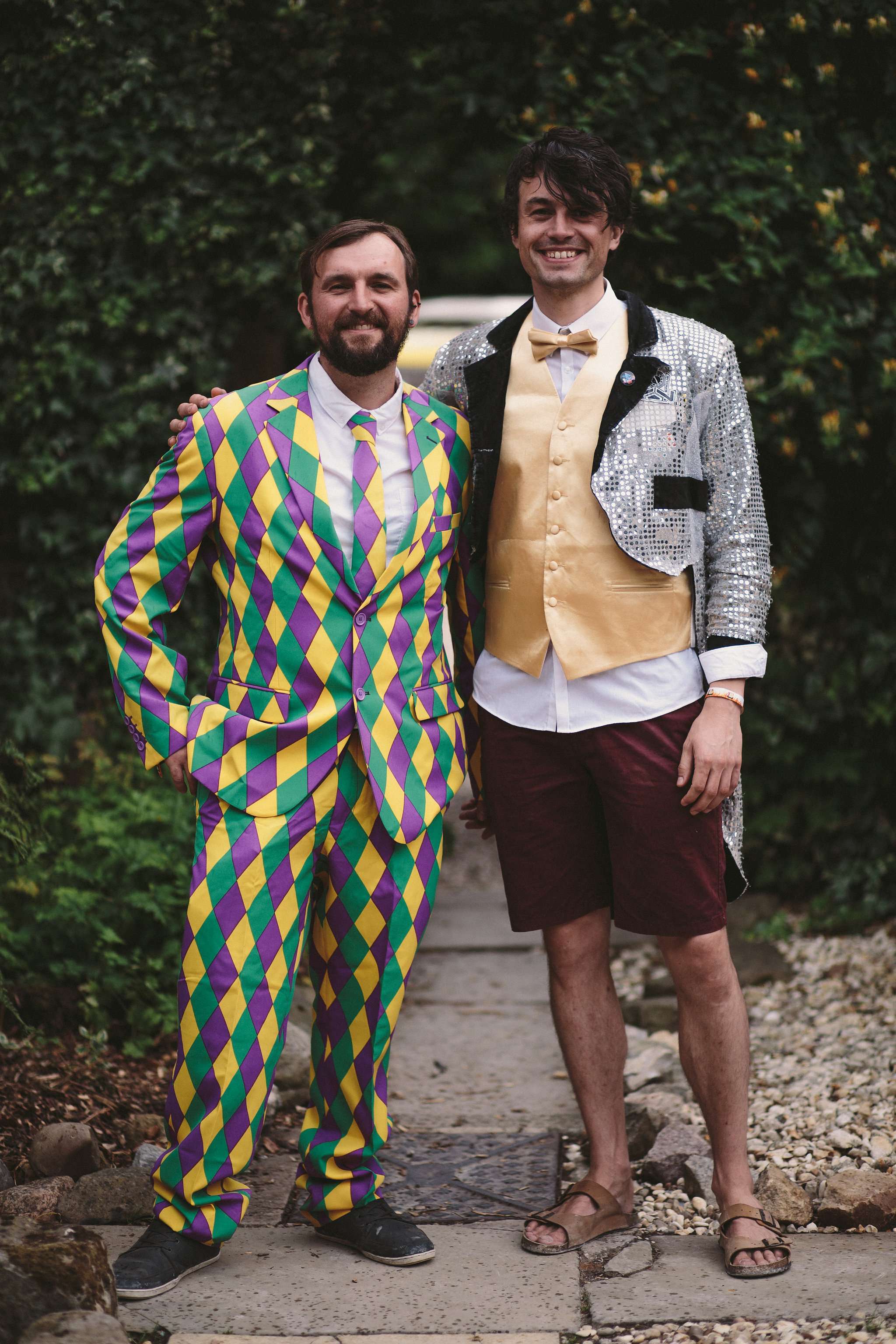 “My husband wore the Harlequin suit from Opposuits, which everyone loved and no one expected him to have such a loud suit, but totally fitted the theme and us. He just wore a normal pair of everyday shoes he felt comfortable in, so don’t feel like you have to buy fancy shoes – who even notices?! His best man borrowed his sequin jacket from a friend and Scott then borrowed it for our posed photos!” 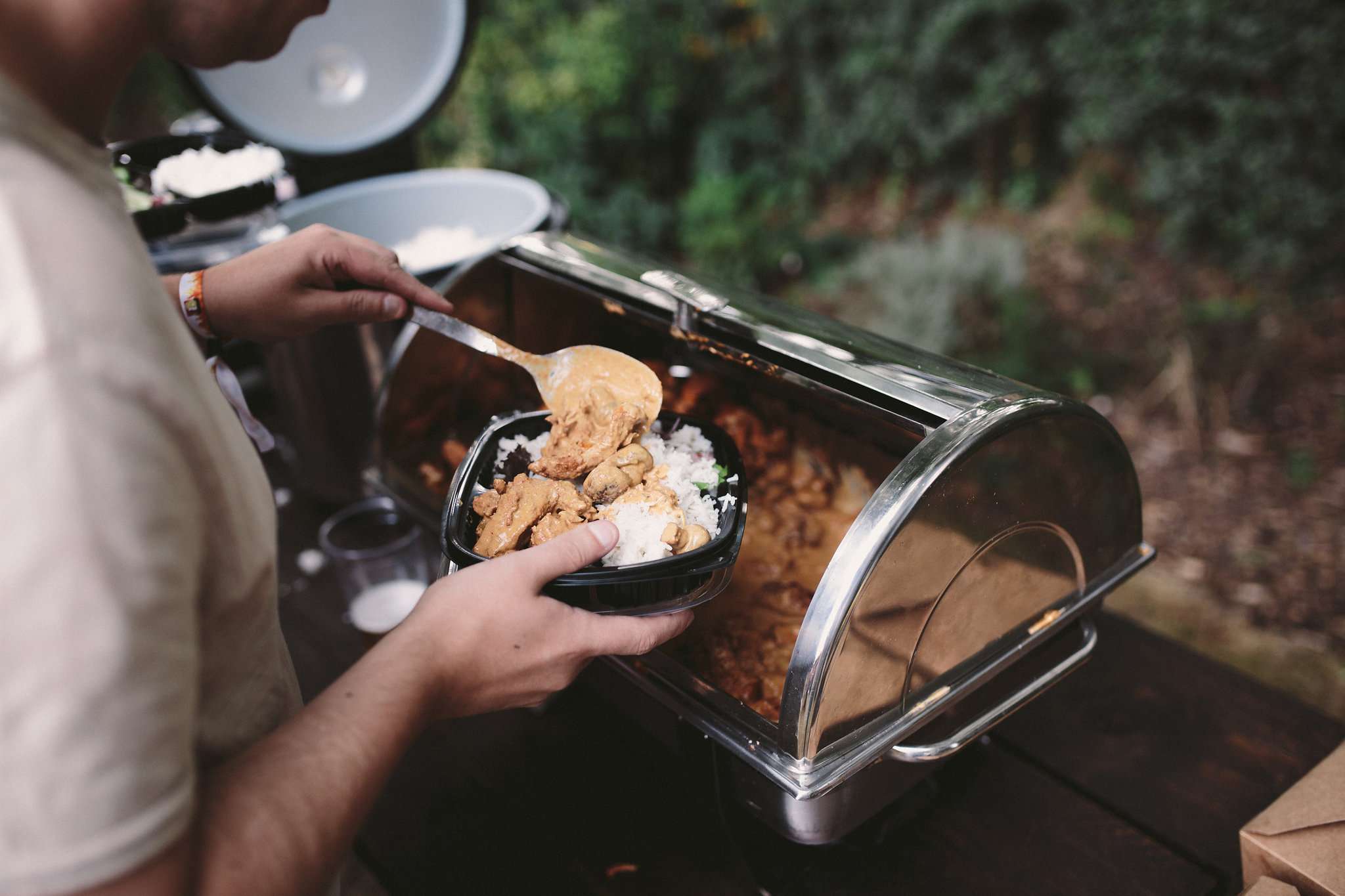 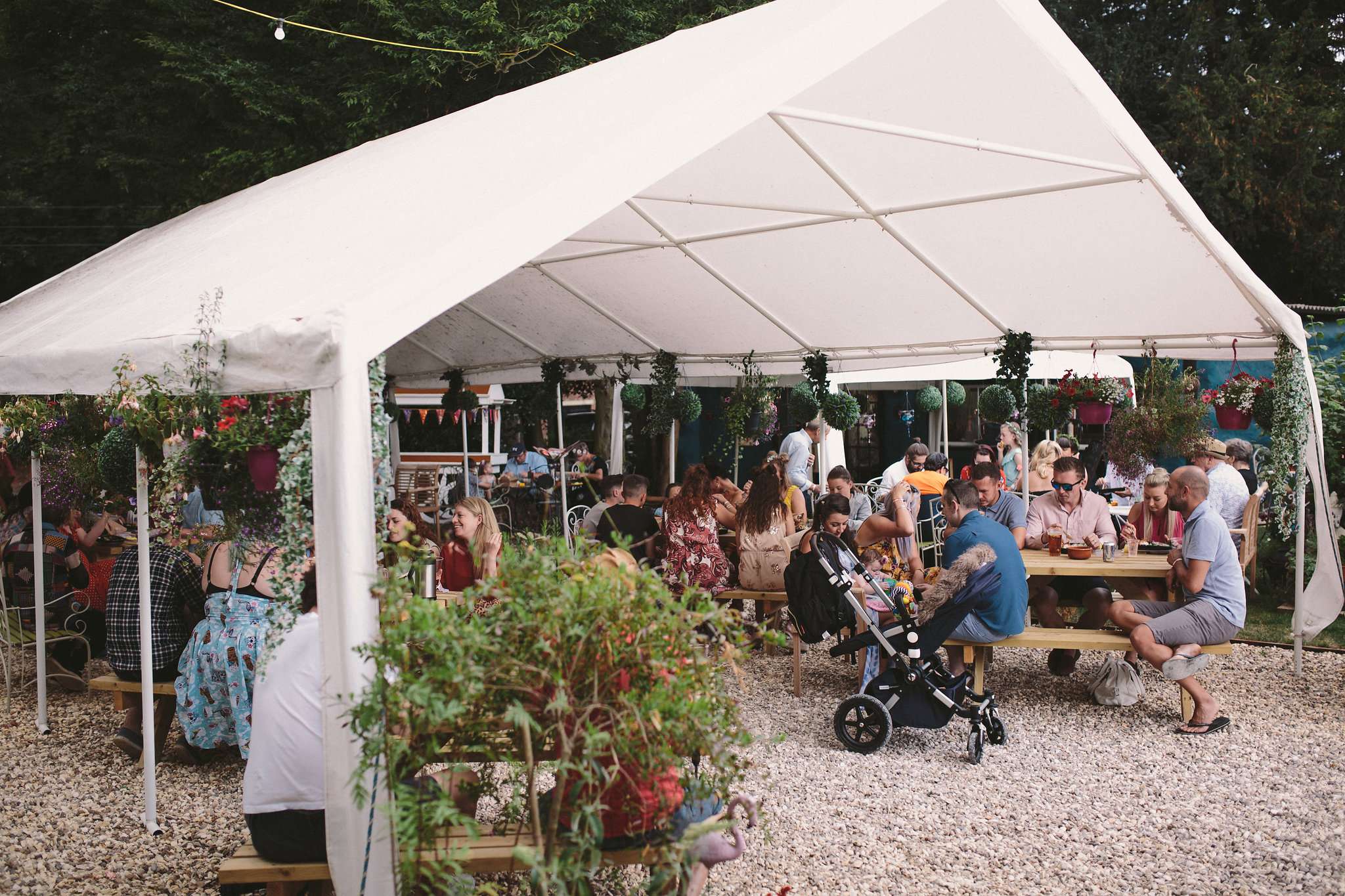 One of the trickiest parts for them was actually deciding on the cake. As neither of them really care for wedding cake, in the end they decided to go for one made of cheese. Rachel explains, “The cake was a touchy subject at first, but both of us knew we didn’t want a traditional cake and we stuck to our guns. We both thought to ourselves, ‘Do we ever eat the wedding cake?’ We’re usually way to far gone to care about cake at other people’s weddings, so went with the only thing we knew we no one could ever not enjoy – cheese!! I simply went to Morrison’s and picked some cheeses from the cheese counter, crackers and chutneys etc which came to about £90 for everything.” 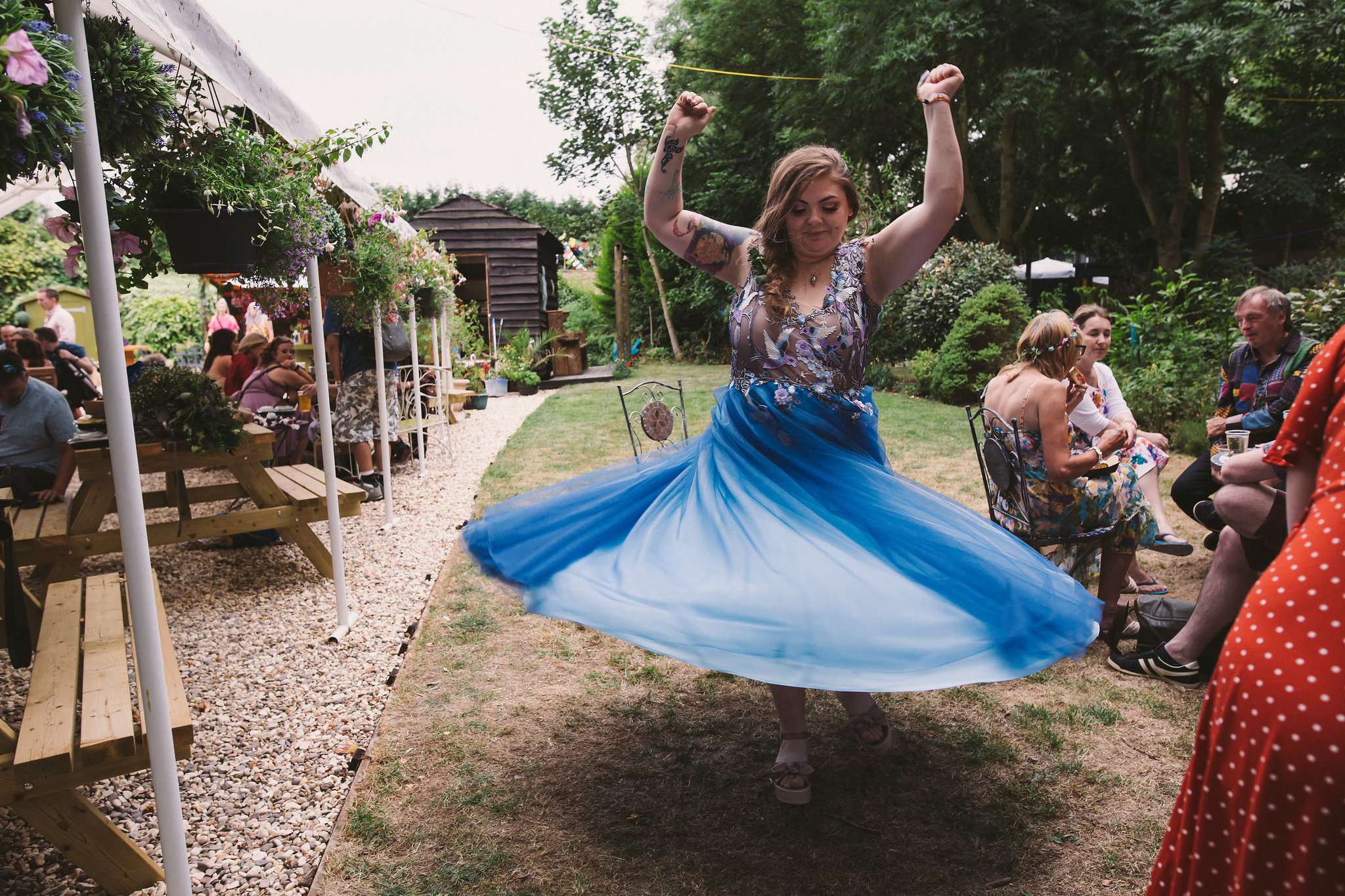 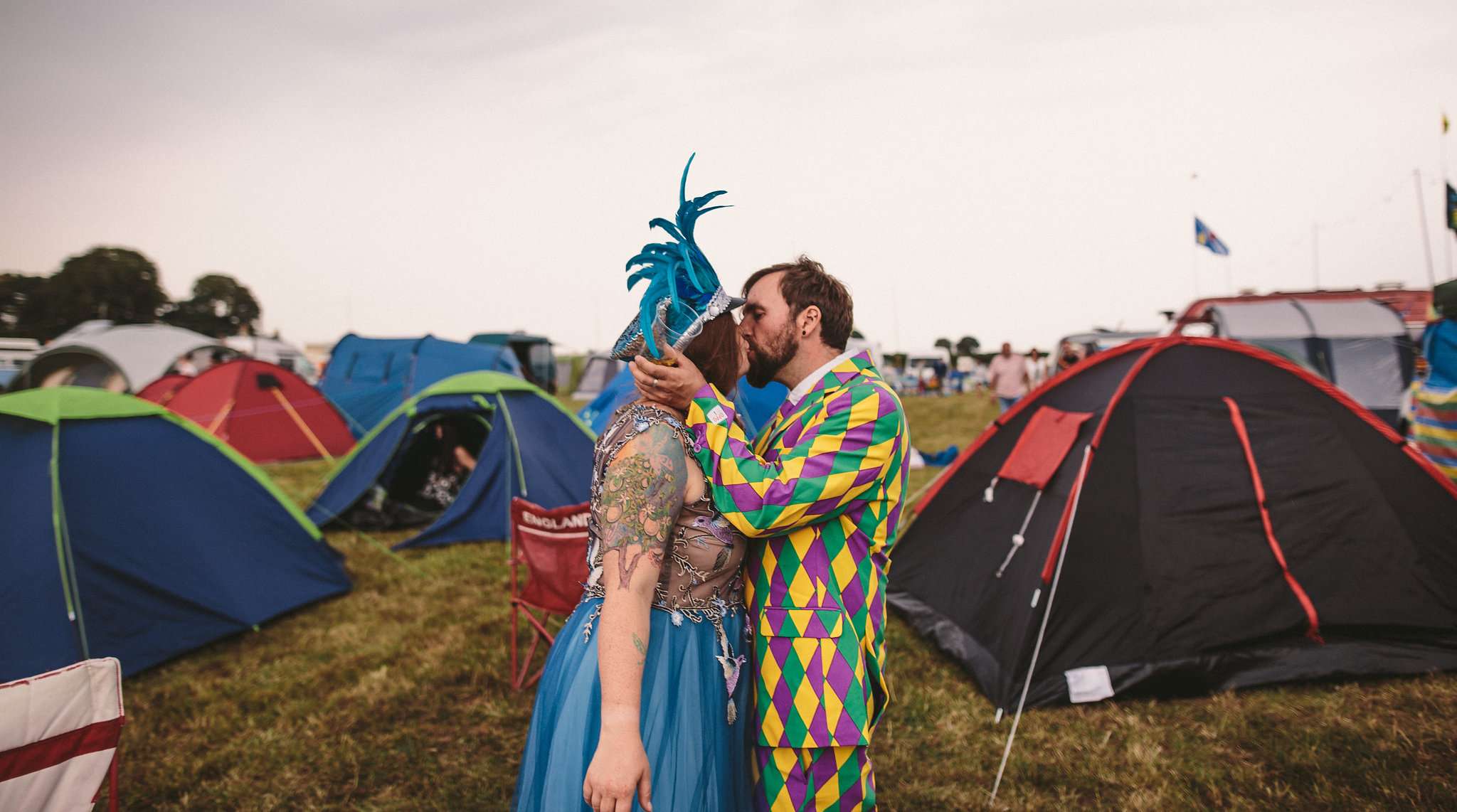 They didn’t ask their guests for gifts. Instead the told them, if they wanted to come, to buy their own tickets to the festival. An unusual approach, but it meant that everyone that was there, REALLY wanted to be there.”It made sure that the people who came, genuinely wanted to be there and experience everything and weren’t just there as it was a free event”, Rachel said. “It might sound cold, but it was important to us that everyone came with positive intentions. This was also the worst thing about planning our wedding though as it was awkward and stressful to keep asking people for money.” 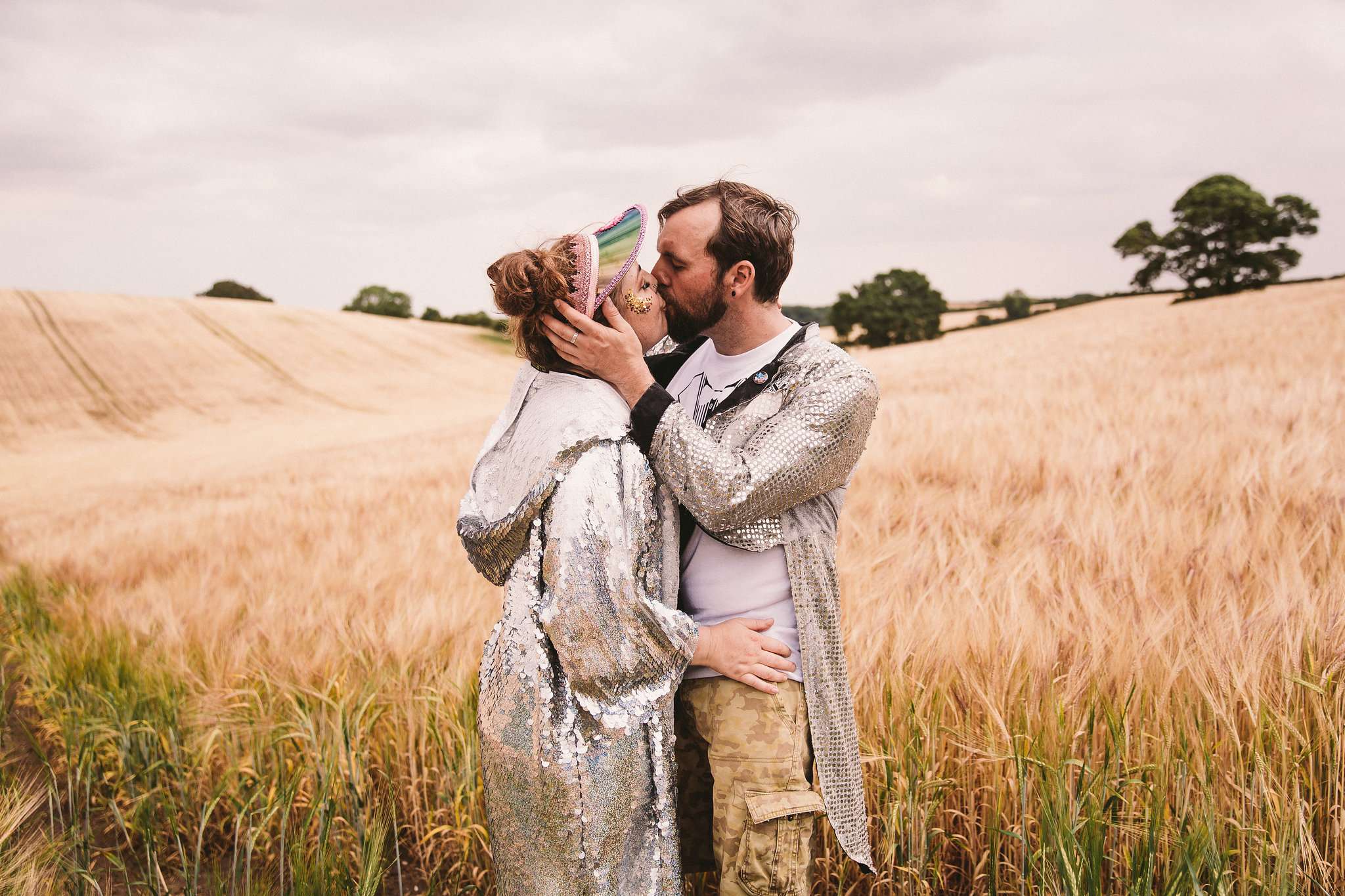 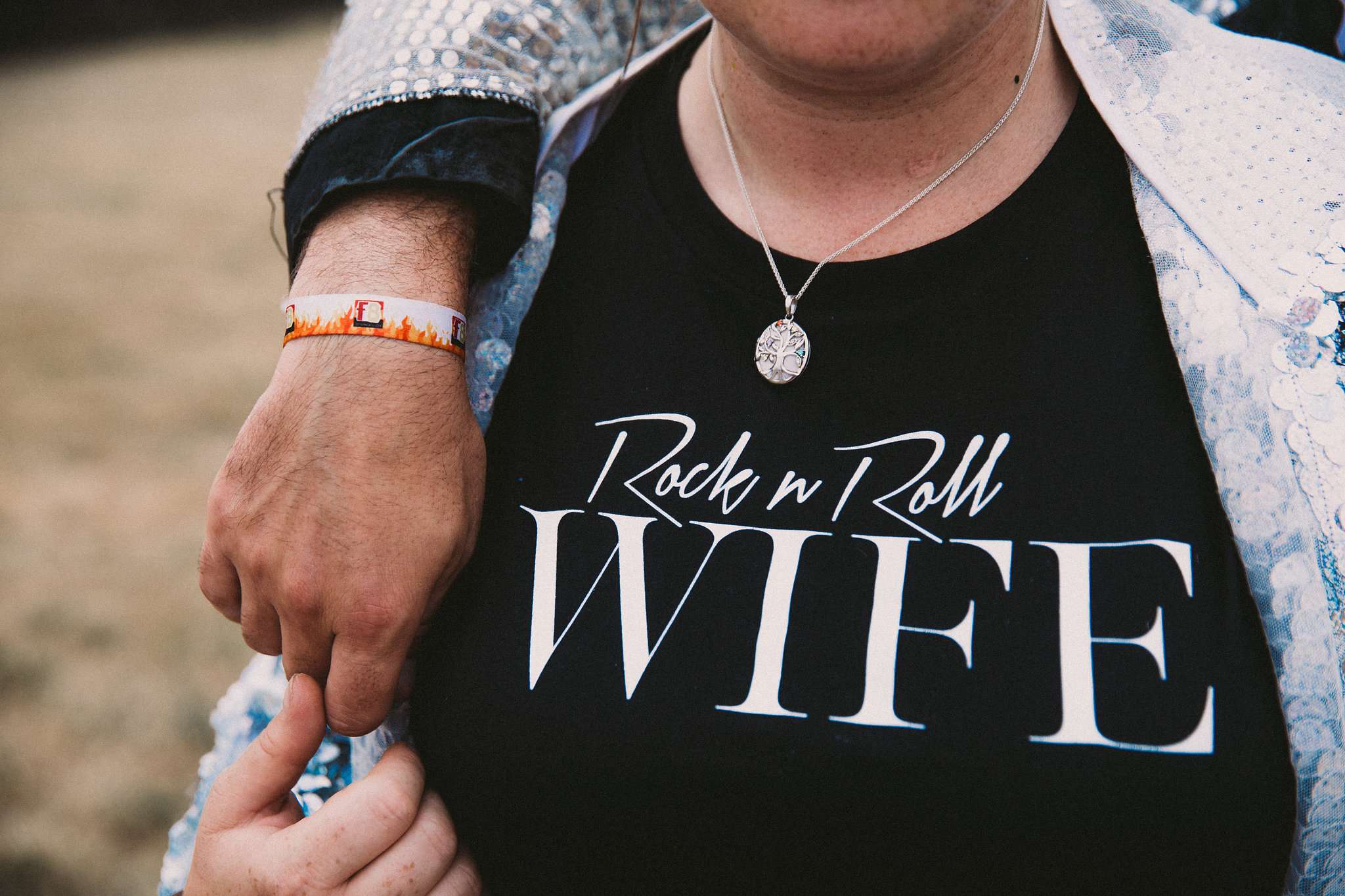 “I made our invites which included their tickets and a loooong script about what to expect, what to bring etc so everyone was fully prepared and ready to immerse themselves in the festival as well as our wedding. Simple. No long agonising over what shade of white card to have as the stationery – I mean who keeps the wedding invites? If it’s important to you, then fine; but don’t lose sleep over it.”

Of their £4,000 budget, food was their biggest cost (after their photographer who travelled from London and was worth every penny!) but it still wasn’t a huge spend compared to a lot of weddings. “Jayne, who owns the festival site, and her kitchen team made us a lovely chicken curry, rice and salad box and southern fried chicken and chips for the kids with jugs of Pimm’s for drinks. It was all prepared in buffet style so everyone just went up and got their own. We sat on benches near the bistro and Jayne’s home, which sits in the middle of the grounds. At the camp site, we bought a large 9ft x 6ft marquee for everyone to gather and sit and carry on the festivities late at night and meet up in the mornings. We provided large gorilla tubs filled with cold water for guests’ own drinks at the campsite. We gave up our caravan for Scott’s parents and stayed in a tent with the rowdy crowd!” 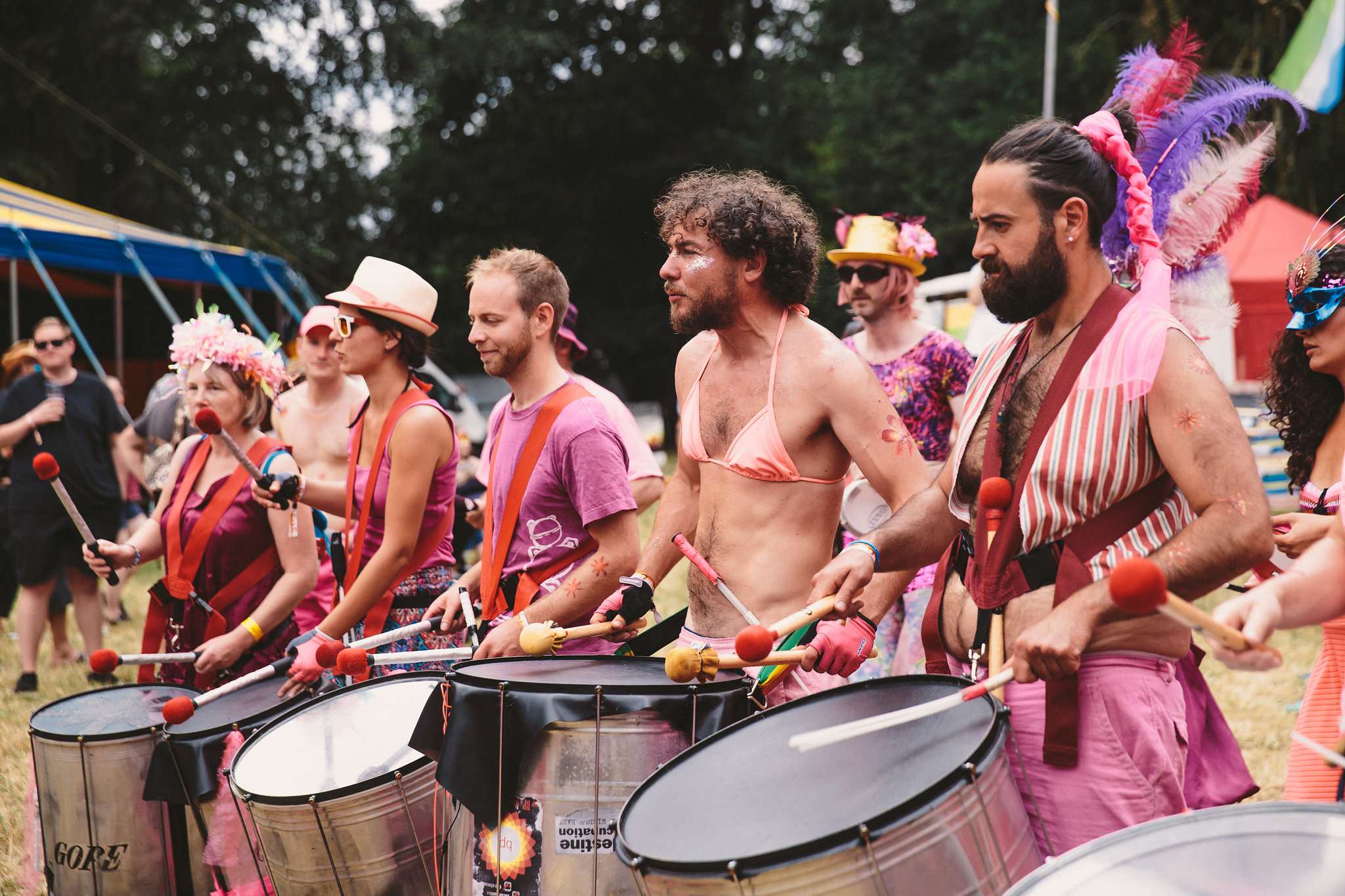 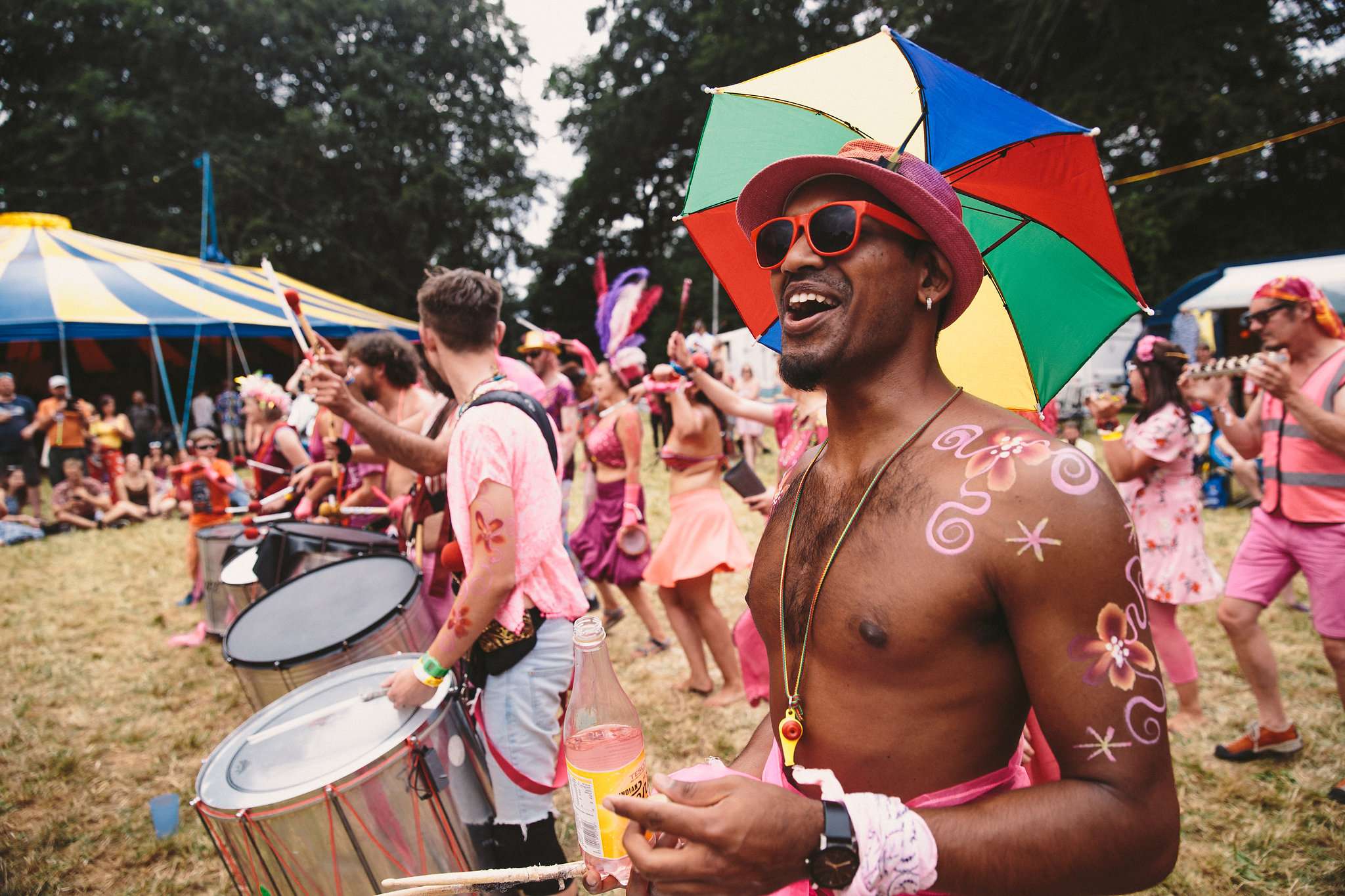 Also, by hosting their wedding an an actual festival, they were able to save money on decorations (who needs to decorate a already awesome-looking event!?) and, of course, on the entertainment! “I can not recommend enough to people to think about the environment you’re going to be in”, said Rachel. “I knew I would’ve been making things for the sake of it, with no real sentimental value, which is just a waste of materials and money. This attitude saved us a huge amount of money. We had no wedding favours, no name cards, no blisters from crafting and simple food and well-priced drinks available.” 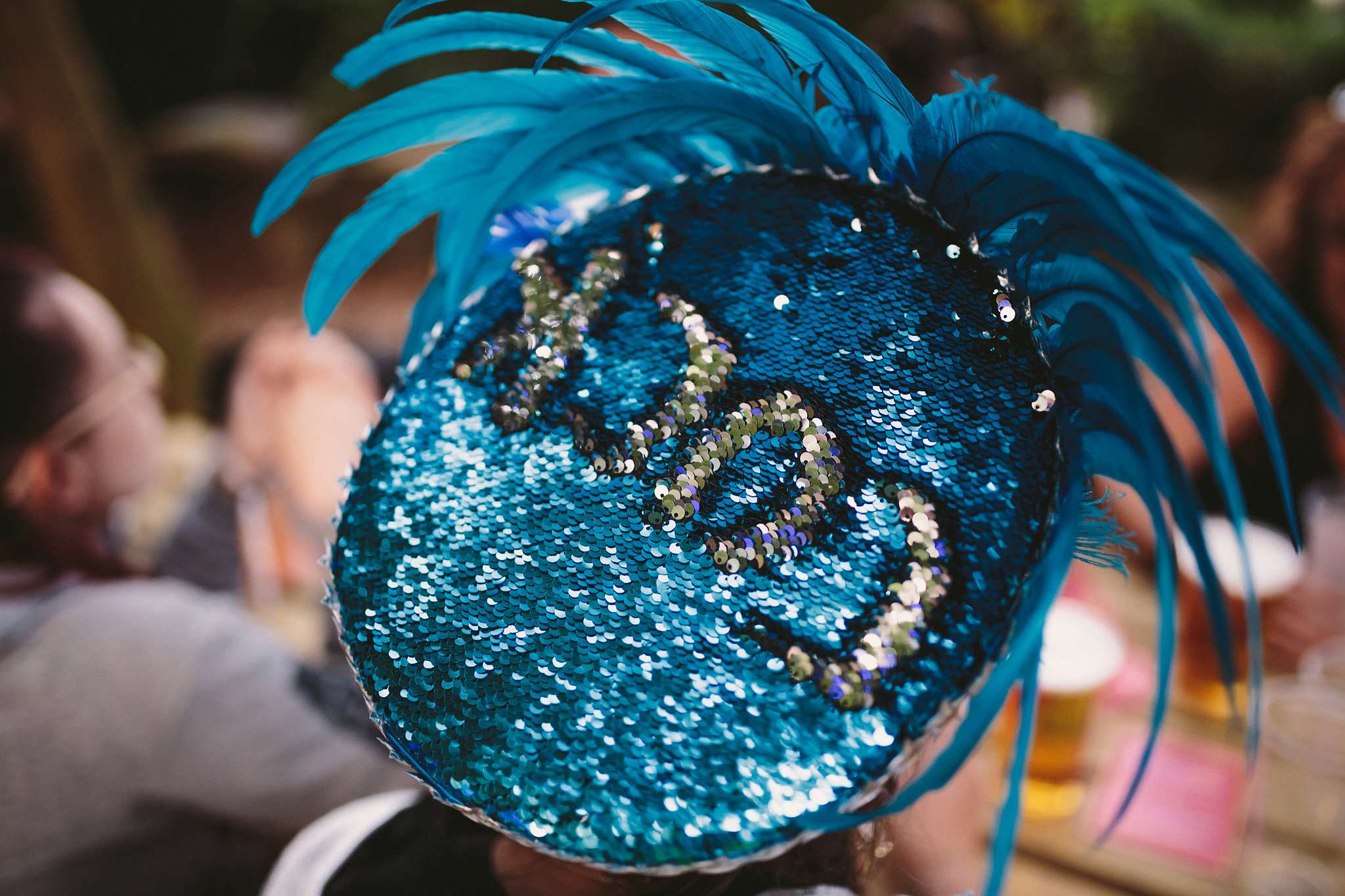 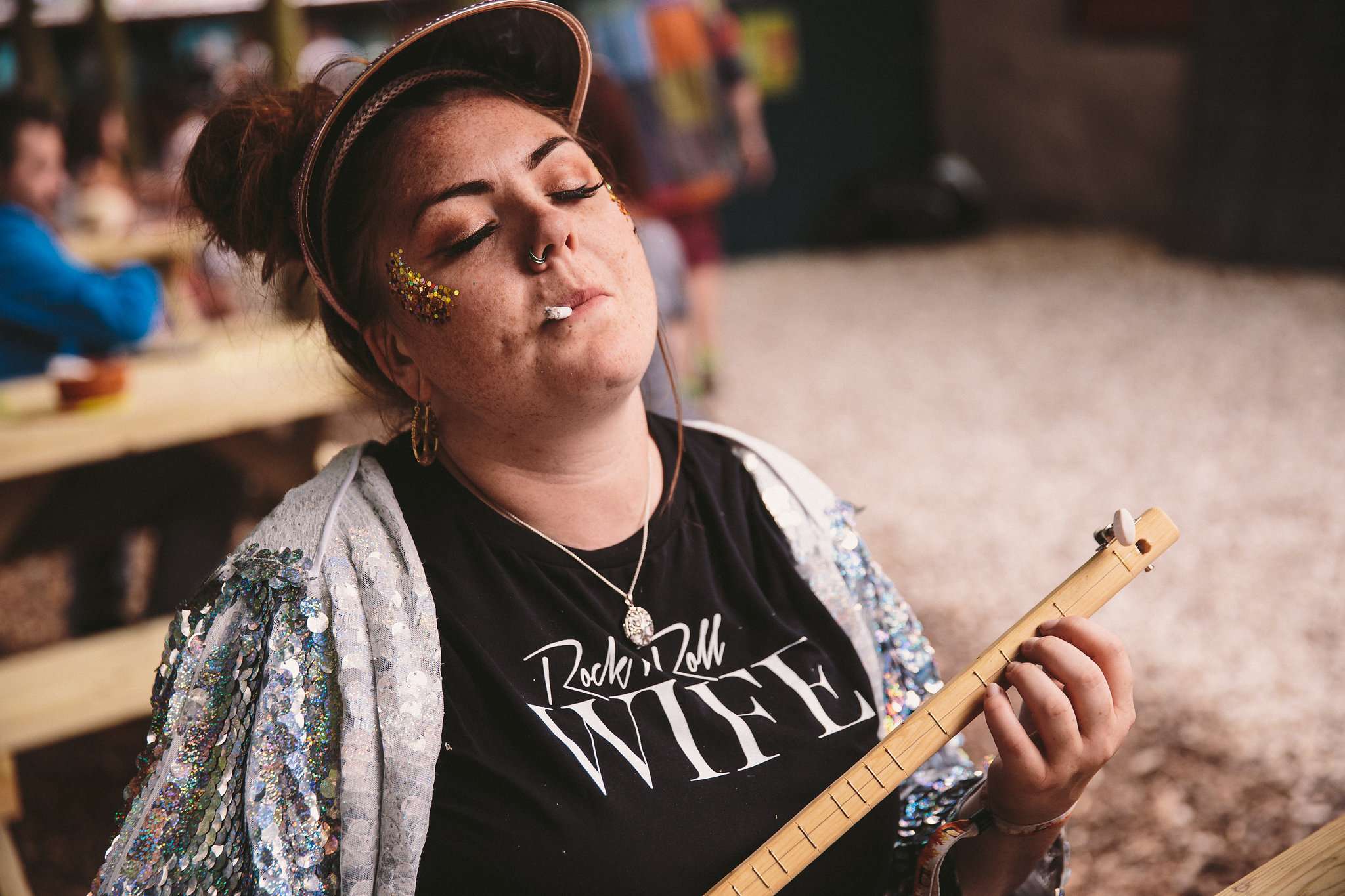 “Throughout the weekend there were loads of amazing bands and DJs providing music from a huge range of genres, there is a huge playlist on the website you can listen to previous year’s performers too. There was also workshops for kids and adults, run by various groups including Earthbound Misfits who are an interactive theatre group, circus skills, street performers, fire breathers you name it they do it! There were fancy dress parades, there’s a spa with a wood fired hot tub, eco-friendly powder paint fights, ceremonial opening and closing shows, yoga and well-being stalls, axe throwing, busking stages and the Sheffield Samba Band who always put on a great show. There was also a salon and a hand poke tattoo studio, where we were both tattooed with Norse Runes by Hannah Rose at Sub Rosa Tattoo Studio, meaning ‘Gateway’ for Rachel and ‘Joy’ for Scott.” 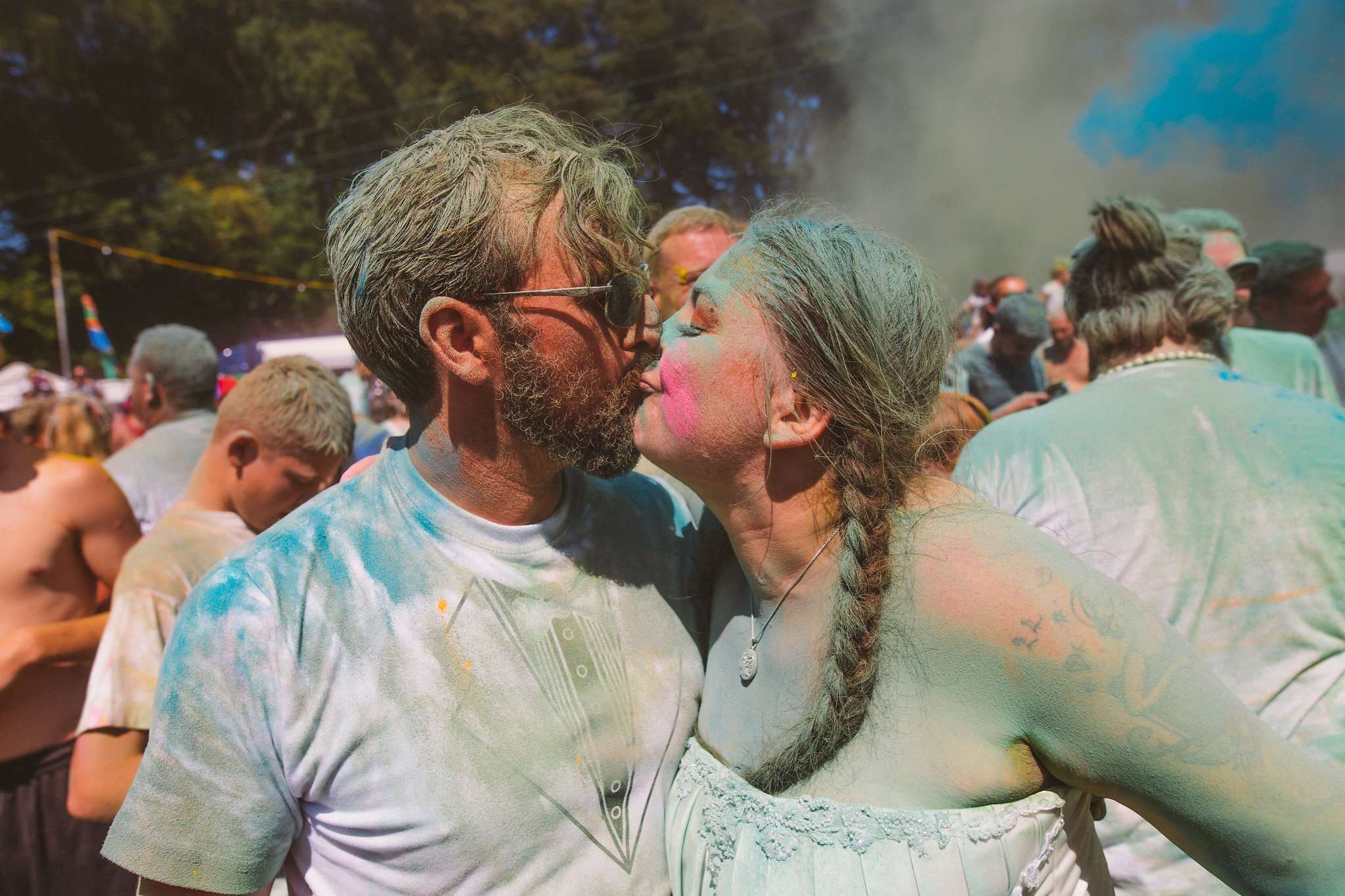 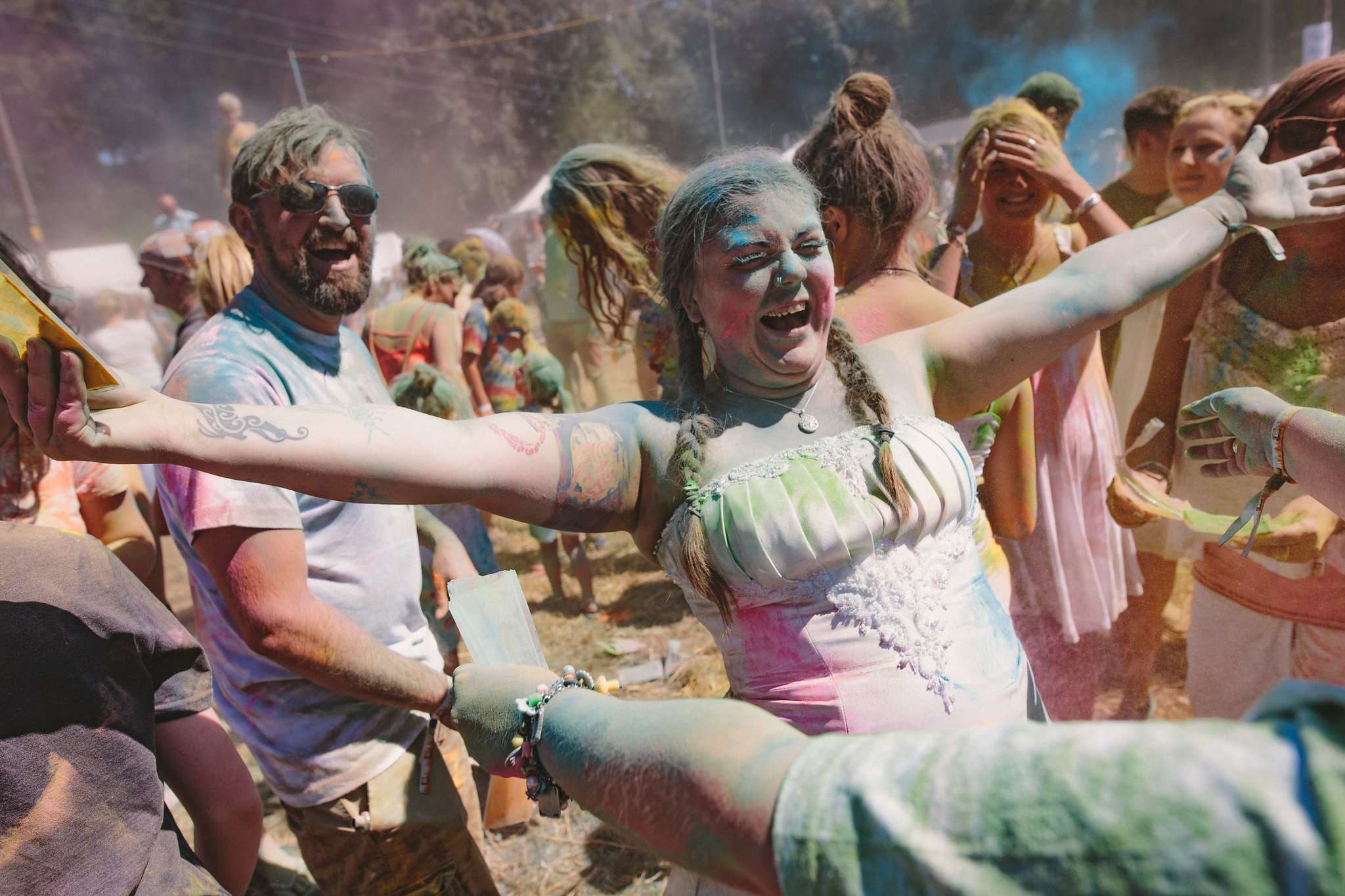 “Our favourite part of the wedding was having family come up to us and telling us that they weren’t sure what to expect, but how much they were enjoying themselves and that they plan on returning next year”, Rachel concluded. “That was truly special to us and showed how special the guys at Festival 8 and Cabourne Parva are. I cannot thank the team enough for allowing us to be part of the magic that is at Cabourne. If I were to pass any advice on, it would be to only spend money on things that are important to you. Don’t get yourself into debt over stationery, flowers and decorations. Think about what you remember from other people’s weddings and if you and your guests will remember it from yours. I hope our guests remember the feeling of the unity of the festival community.” 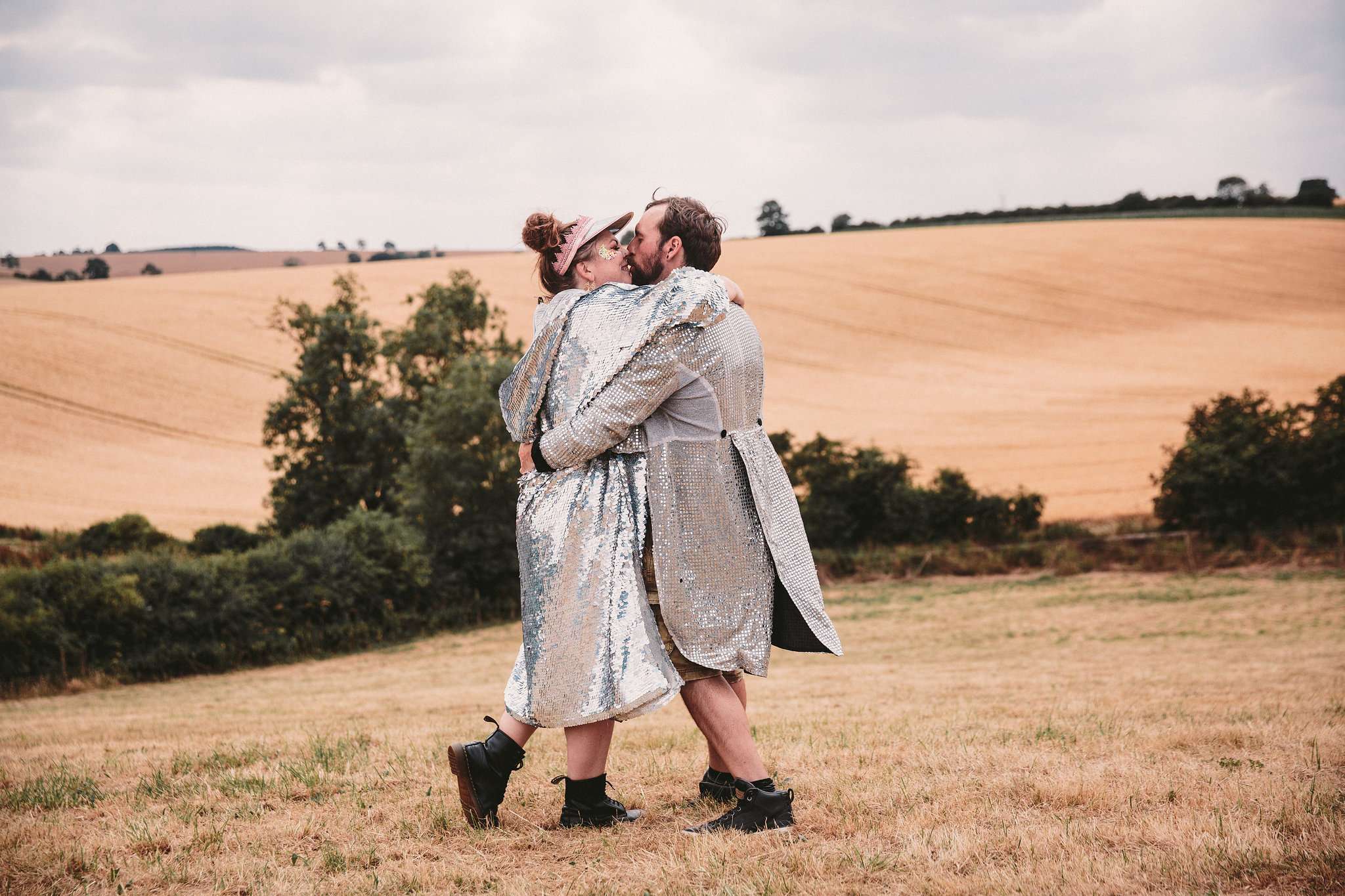 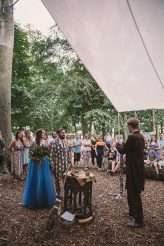 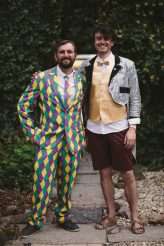 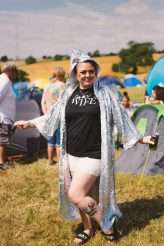 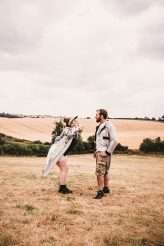 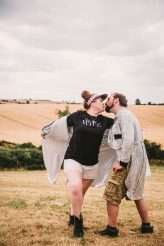