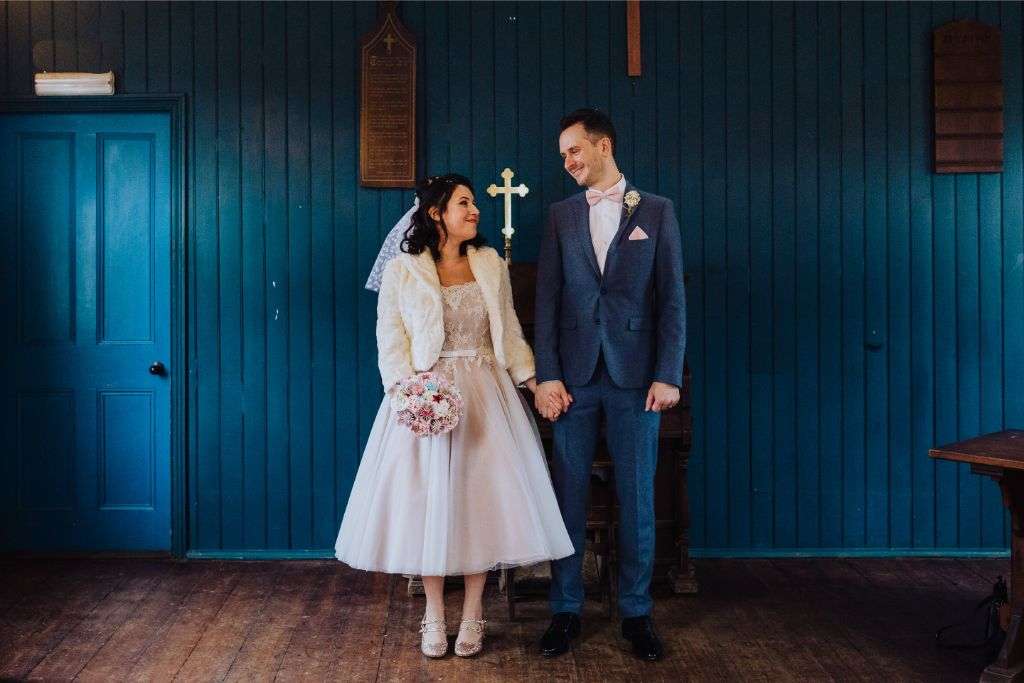 Nick and Inés didn’t really have inspiration for how they wanted their wedding day to look and feel: “To be honest,” said Inés, “we just threw together a bunch of stuff that we loved and hoped for the best!” They ended up with a day filled with childhood nostalgia – from the retro toy decorations collected from scouring eBay, charity shops and their parents attics, to the childhood photos of themselves that adorned every table at their reception. 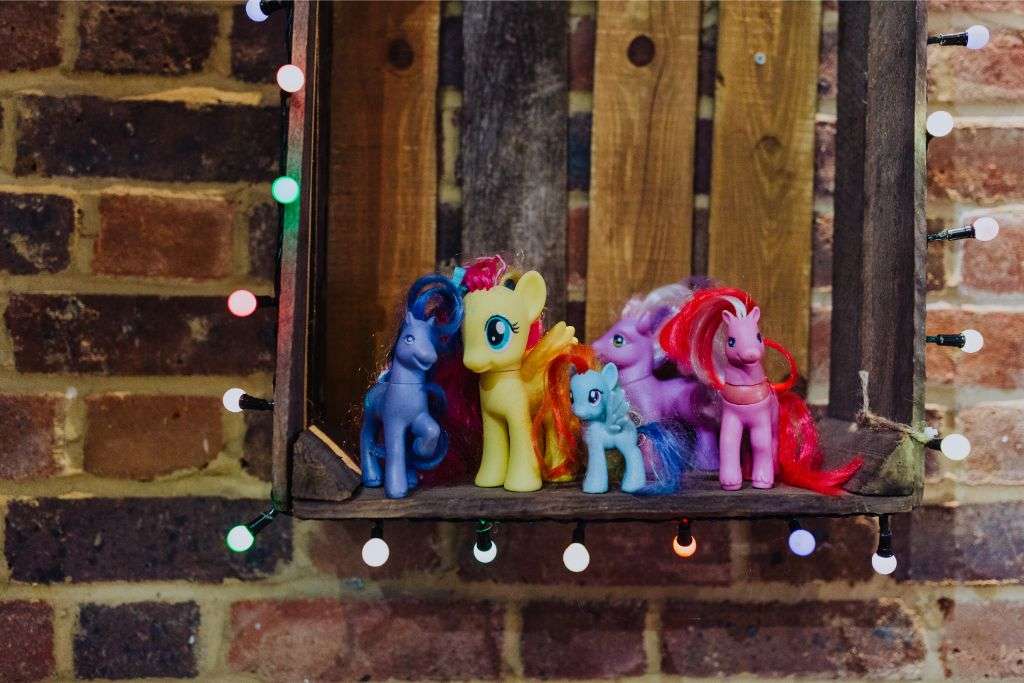 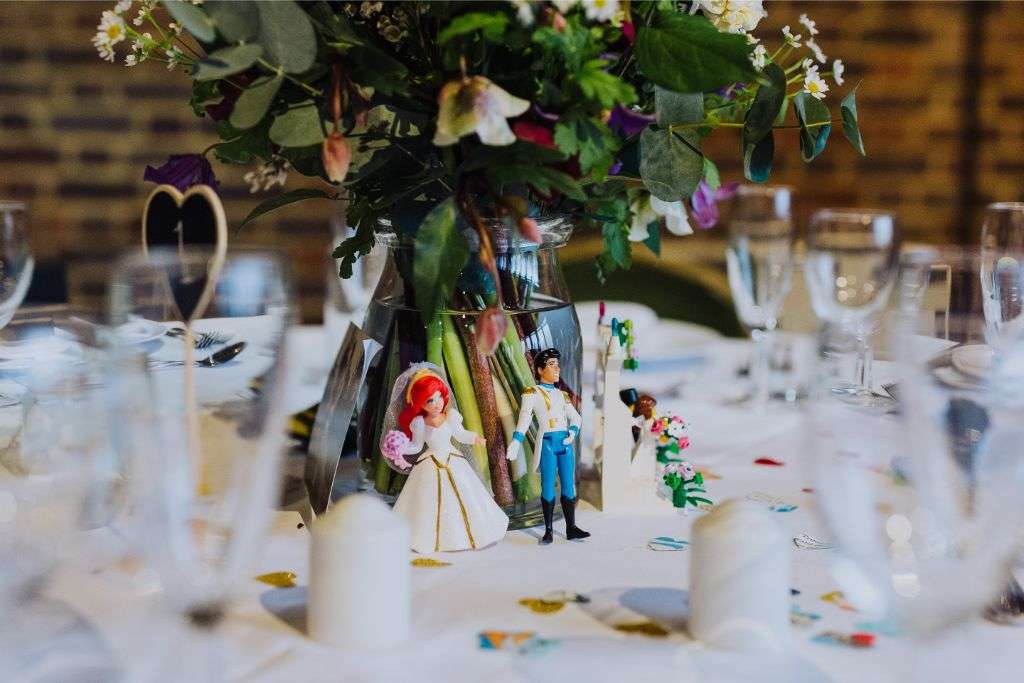 It was important to the couple that their day was fun and relaxed. “I honestly believe that organising a wedding is as much work as you want to make it,” said Inés. “I didn’t want it to be this massive stressful thing that made us argue, so instead of doing things to try and please other people (you won’t ever please everyone anyway!) we focused on planning things to be as laid-back as possible.” 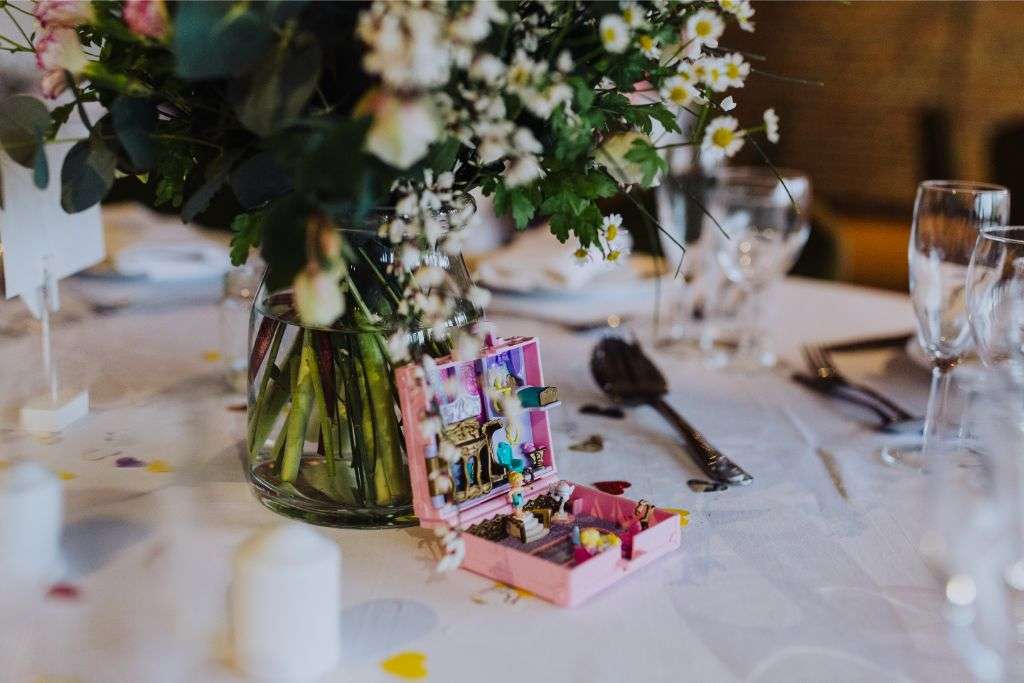 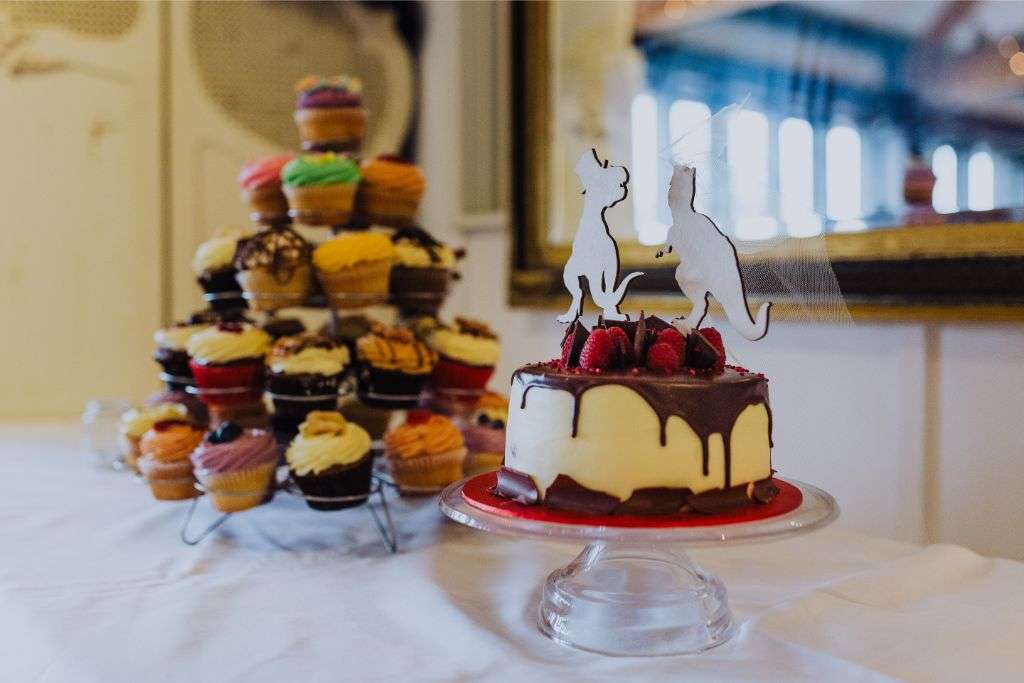 For Nick and Inés, this meant having their day somewhere relaxed; the pink chapel at Museum of Kent Life fit the bill for them perfectly. “I love churches but neither of us our religious, so with the chapel at Kent Life being deconsecrated it meant we could have a civil ceremony there.” 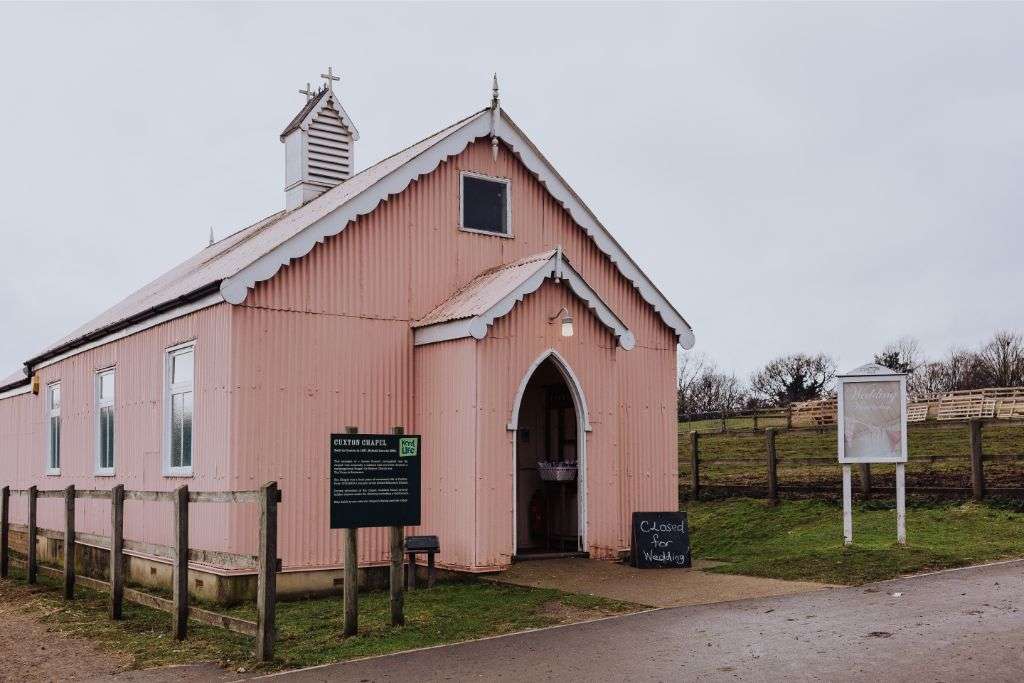 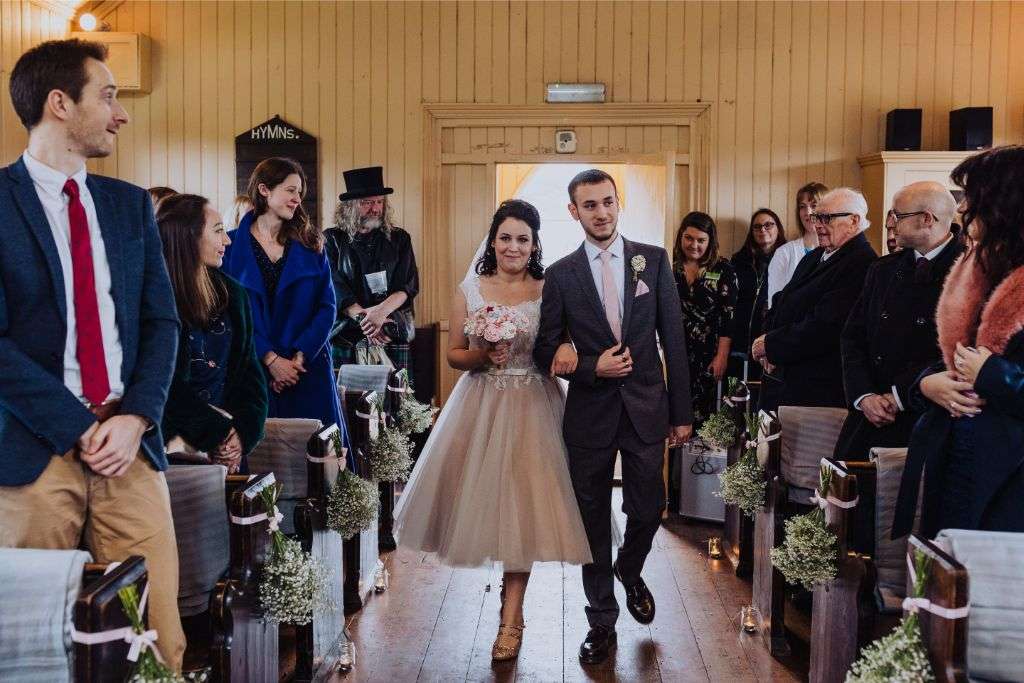 They were also easy-going with what their bridal party wore. “For me personally the whole concept of dressing grown women in matching dresses felt slightly bizarre,” she said, “and I wanted them to feel happy and comfortable on the day.” 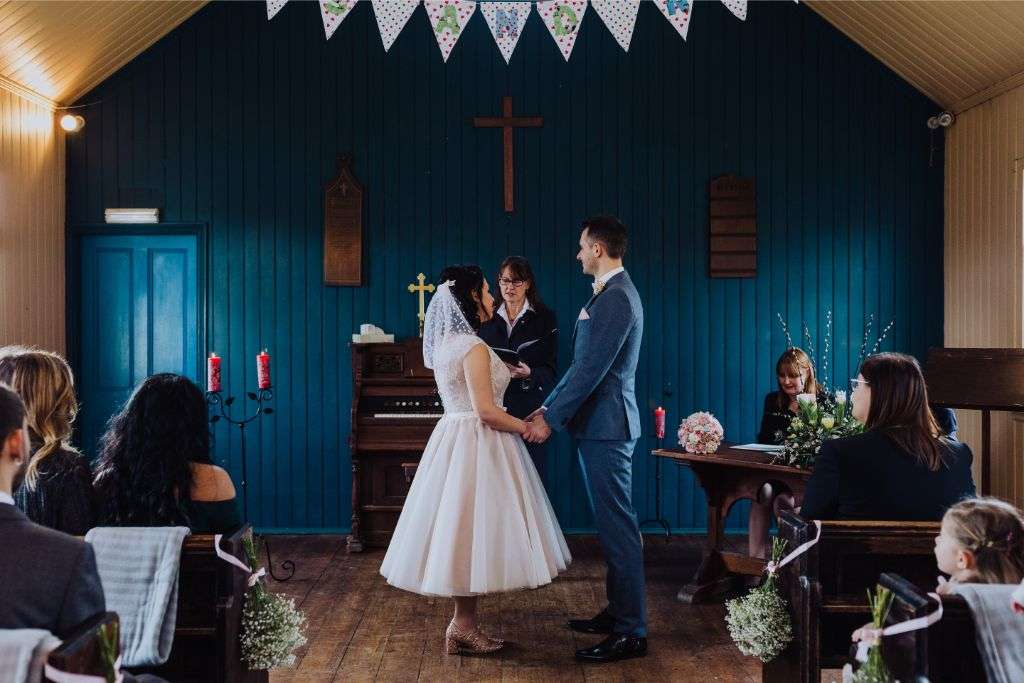 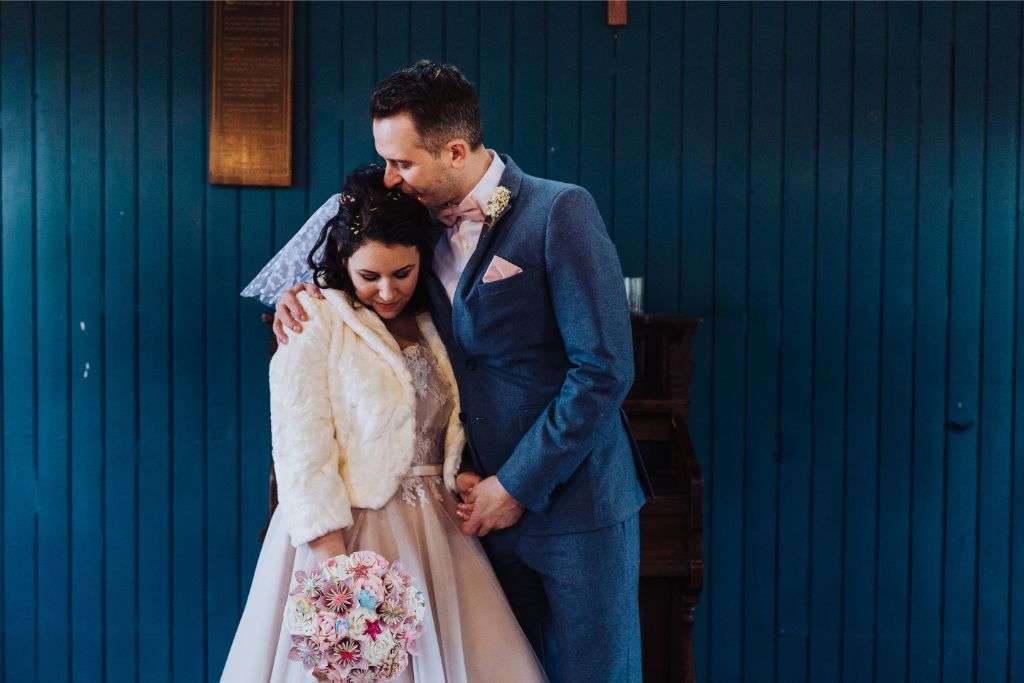 They also made a conscious effort to include the important women in their lives significantly throughout the day. “I thought it was completely absurd that we had to list our fathers in the register so we had both our mums as witnesses.” Their speeches were also very female-centric; Inés gave a speech, as well as her mum and her sister. “It really annoyed me that the traditional wedding speech list is one where women don’t speak!” 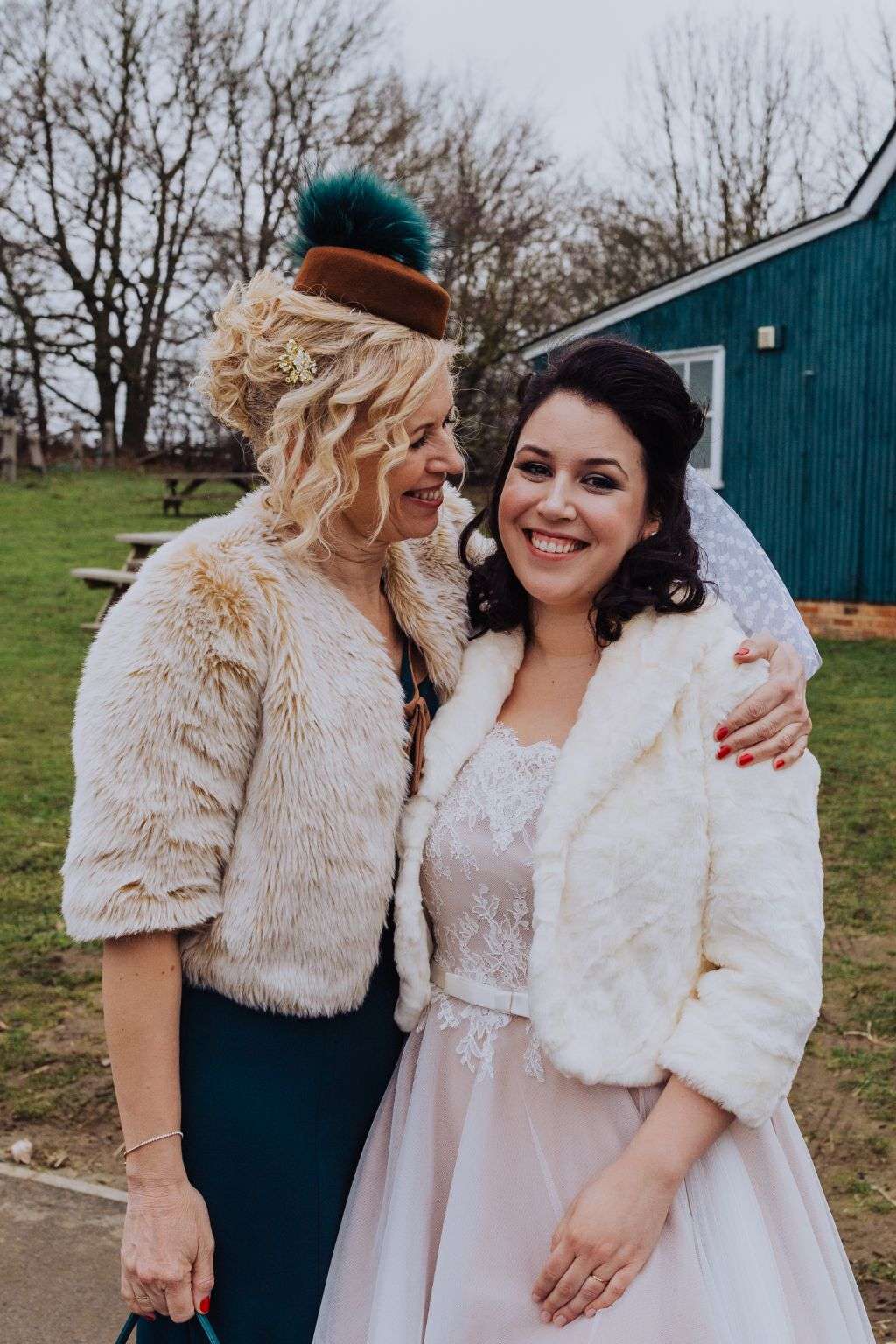 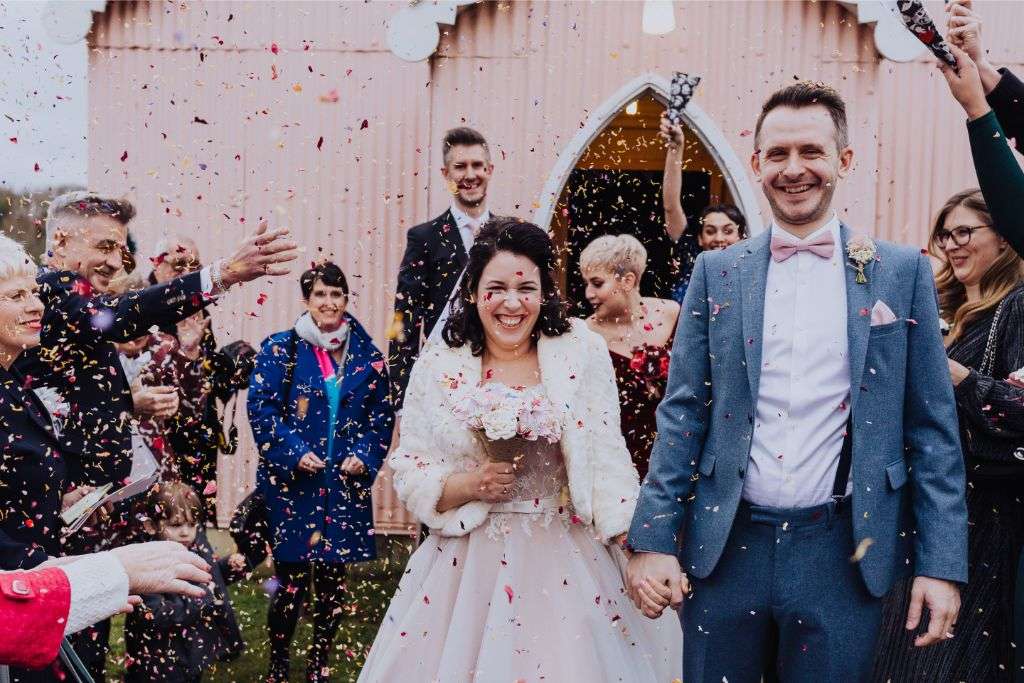 Inés chose a retro-style LouLou Bridal dress, and paired it with a Rock n Roll Bride x Crown and Glory veil and Office shoes. “I always knew I wanted a vintage-inspired tea-length dress. I’m not at all girly in day-to-day life (my Converse went on as soon as humanely possible!) but wanted to wear something beautiful on my wedding day.” 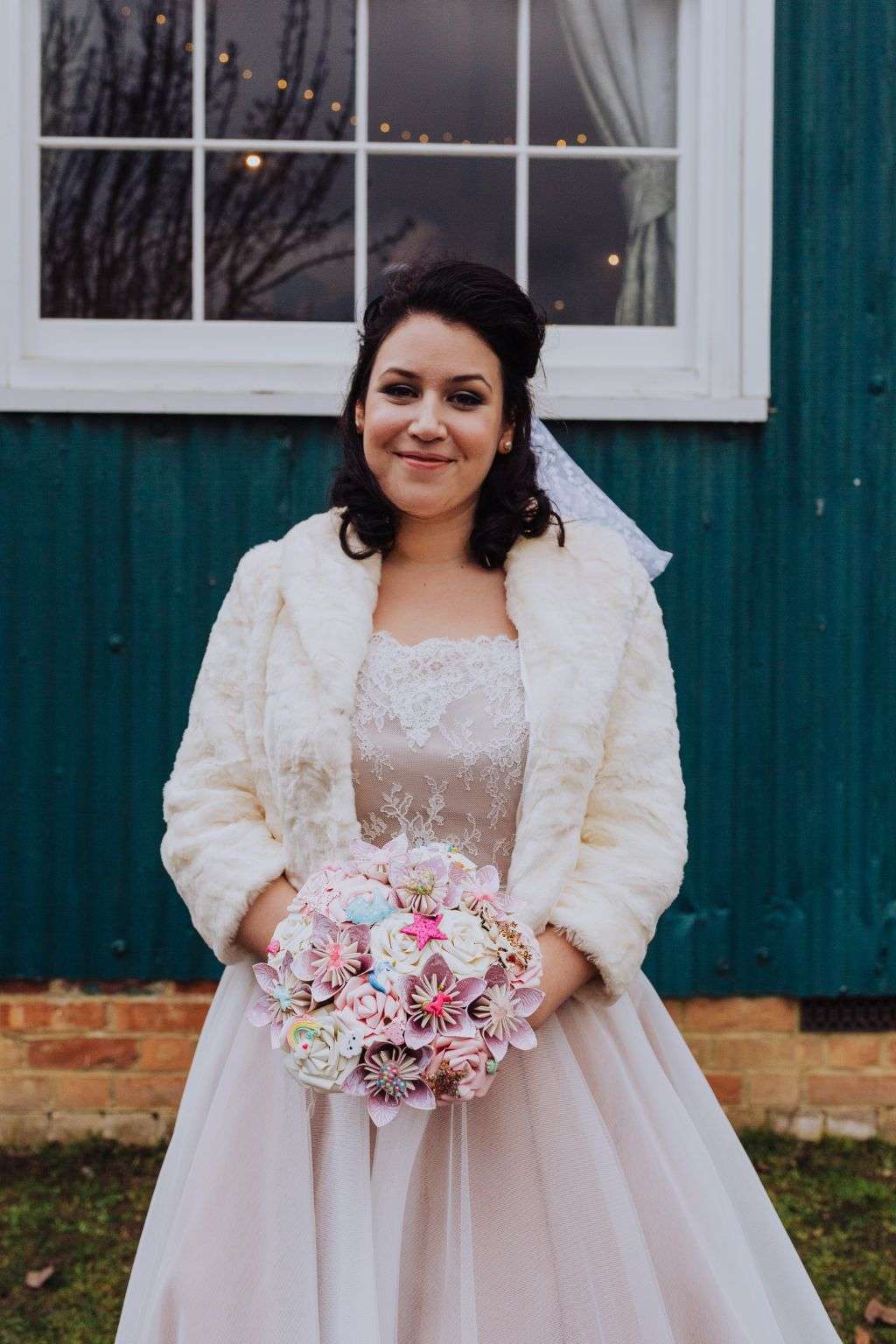 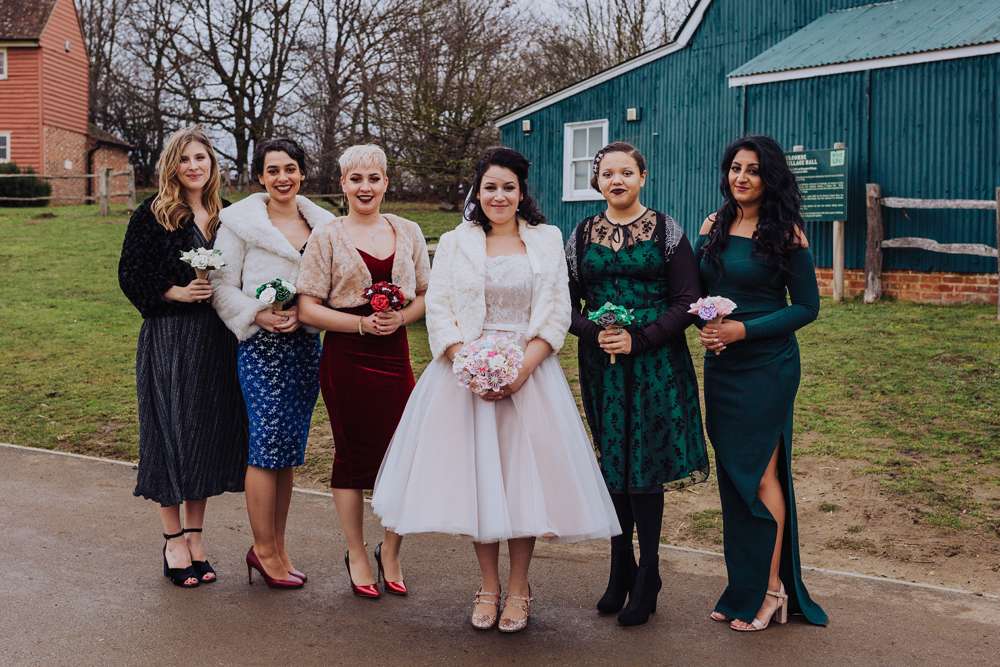 She fell in love with her kawaii inspired bouquet when she saw it on Etsy, and had the maker design individual bouquets for each of her bridesmaids based on their personalities too. “So we had one with butterflies, one black gothic one, one with rabbits on, one star and succulent themed one, and one Harry Potter themed. I thought that was nicer because it meant they could keep them after.” 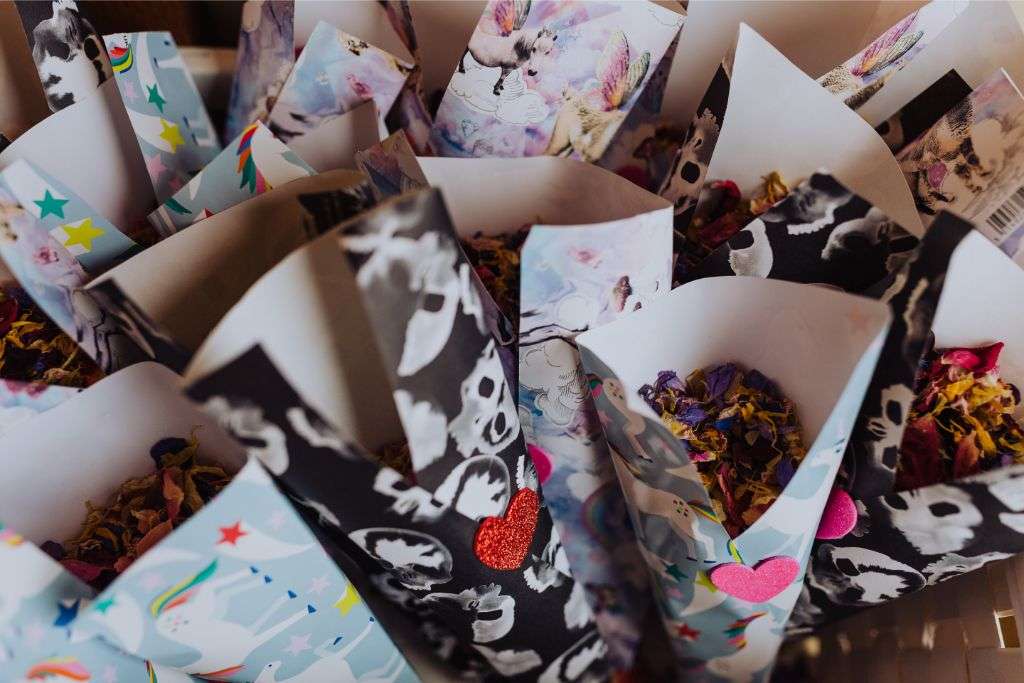 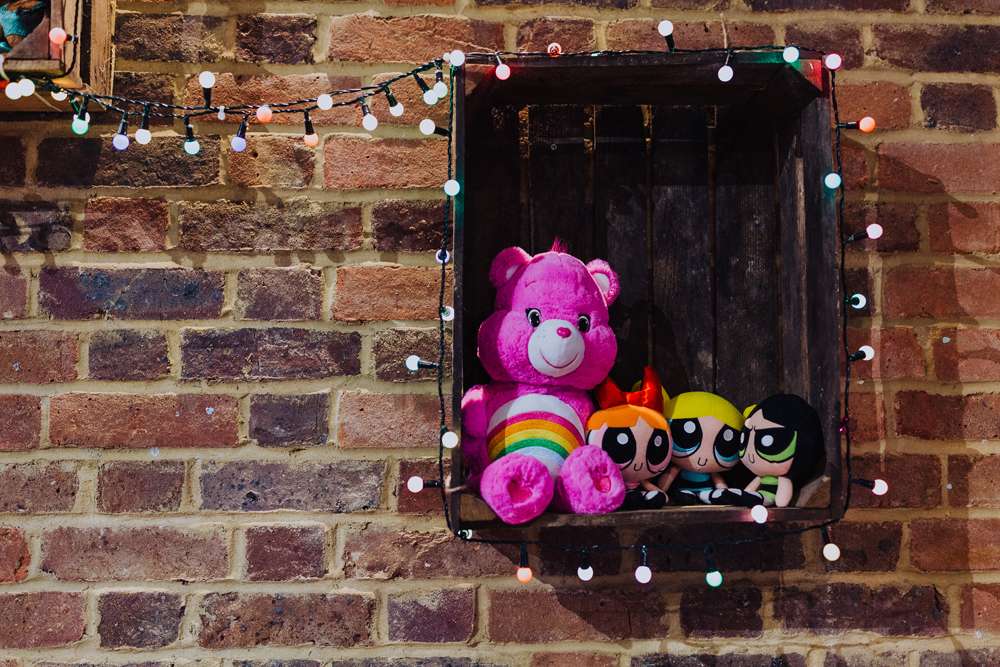 Their favourite thing about planning their day was working on a project together. “This sounds so trite but spending time with Nick working it all out really made me see how in sync we are,” Inés concluded. “We both like the same stuff, but probably more importantly we also hate the same stuff and completely agreed on everything we definitely didn’t want. The only downside is I feel like we need to plan another one now it’s all over!” 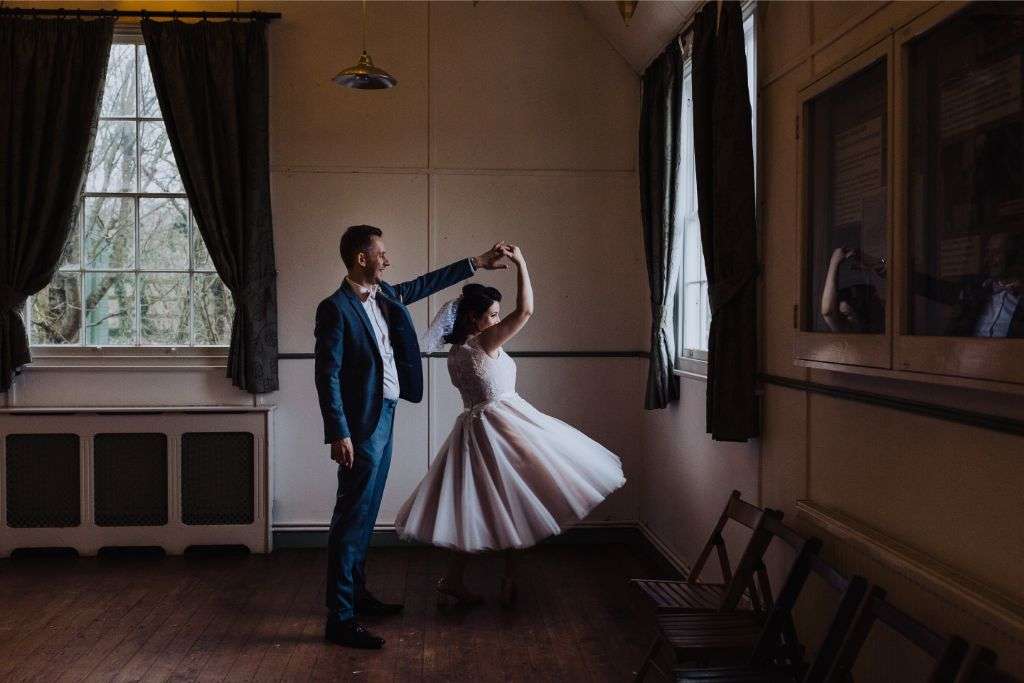 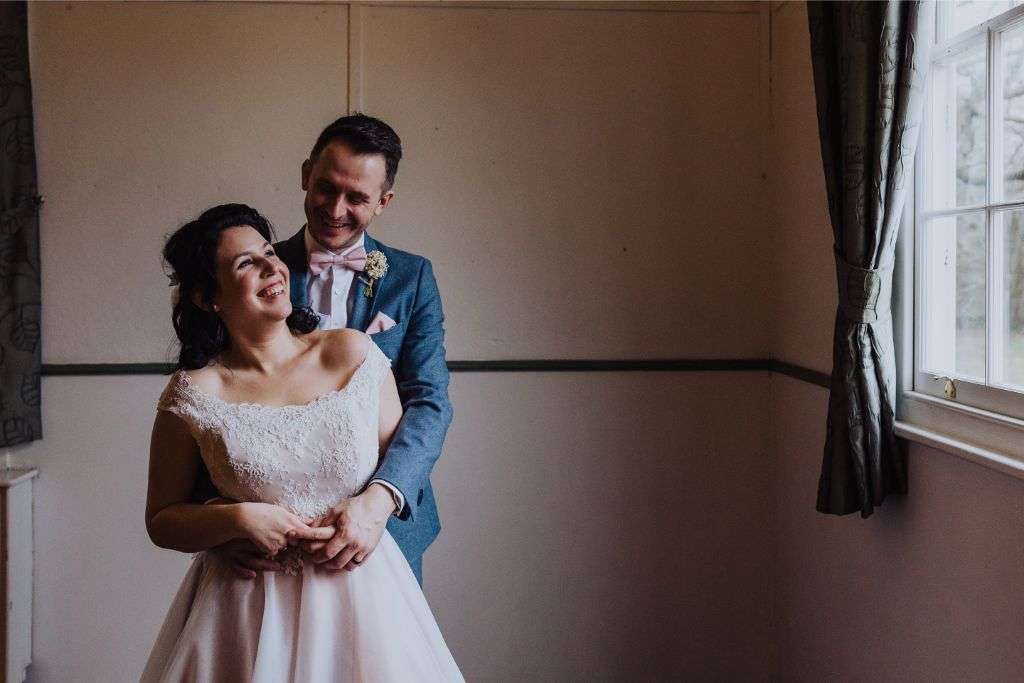 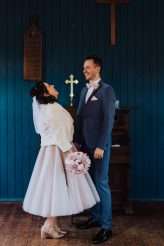 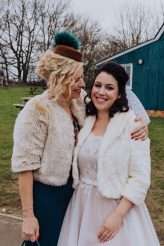 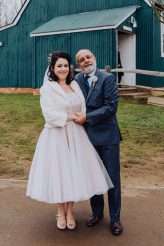 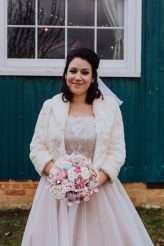