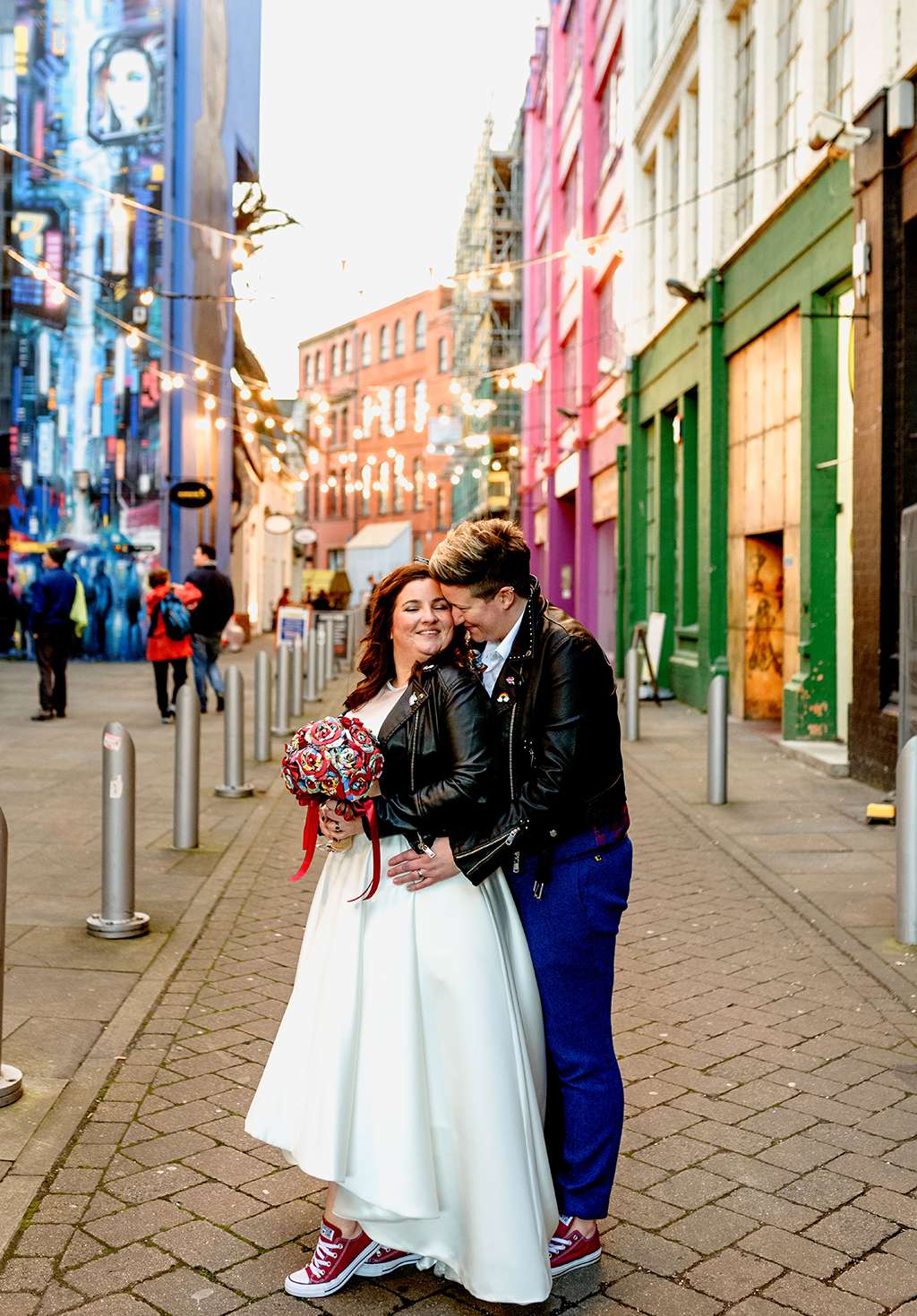 Becca and Suzy met at work nearly a decade ago. They became good friends and that was it – until a drunken Christmas work do tipped their friendship into new territory – they haven’t looked back!

Their intimate wedding was held at The Bond in Birmingham in November 2017. Loving how different it was from ‘regular’ wedding venues, and also in their old hometown of Birmingham, it felt right for the couple as they knew they didn’t want a typical venue – and that the surrounding graffiti-covered streets would make for awesome photos. 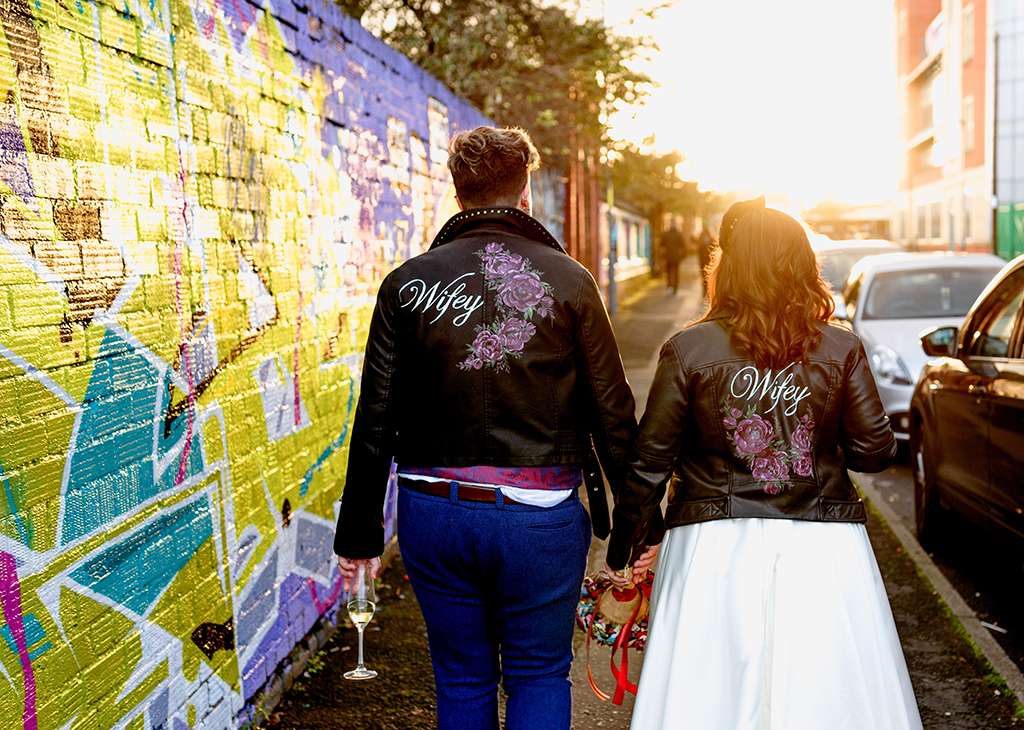 While they didn’t set out to have a theme for their day, they joked that as they love red wine, perhaps that should be the theme – and it kind of stuck! They chose lots of things in red wine hues, made a cork board guest book out of used corks that their family and friends were tasked with saving for them. They even had their tables named after their favourite wines from around the world. 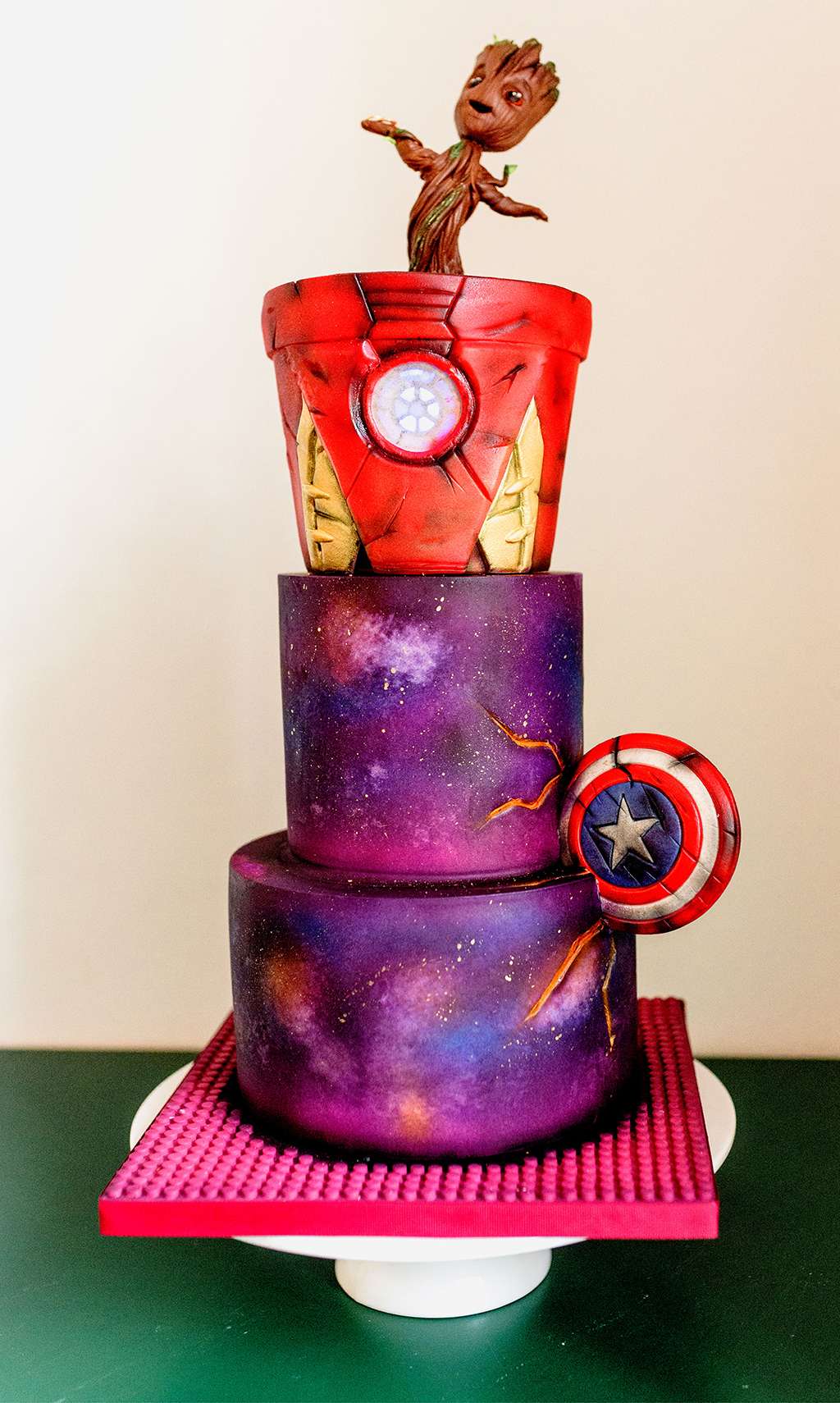 They also include loads of geeky/ gamer/ Marvel references such as their incredible Baby Groot/ Captain America cake made by Stefanie from Peggy Sue’s Confectionary who they’d met at the Eclectic Wedding Extravaganza a few months before the wedding, The chocolate Baby Groot cake topper now sits pride of place in their bedroom as they couldn’t bring themselves to eat him!

The couple DIY’d load of aspects of their day. They made paper bouquets and buttonholes from fashion magazines, Disney books (for the bridesmaids) and sports magazines (for the dads and bridesman). They also hand-painted their matching ‘Wifey’ leather jackets. “Whilst we probably didn’t save any money doing things ourselves, we loved the process of making things and it made everything extra special to know that we’d created it together,” explained Becca 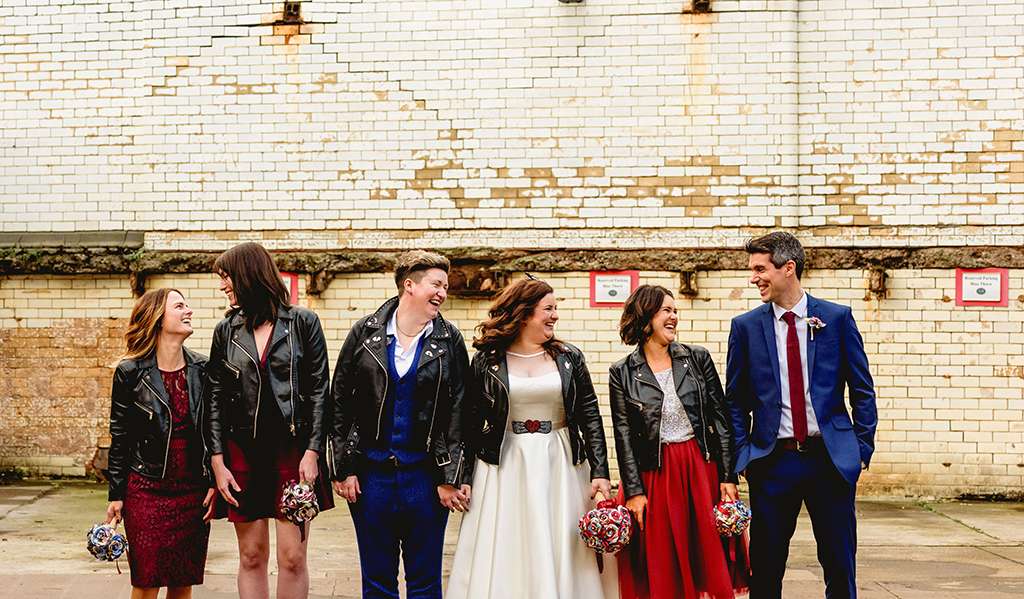 As well as Marvel and Lego, the couple both love a bit of gaming, so they hired two retro arcade games machines to entertain their guests during the evening. “We wanted a chilled-out, relaxed vibe from our reception, and knew that getting to play Mario Kart and Streetfighter together would be a great ice-breaker for even the shyest of guests!” said Becca. 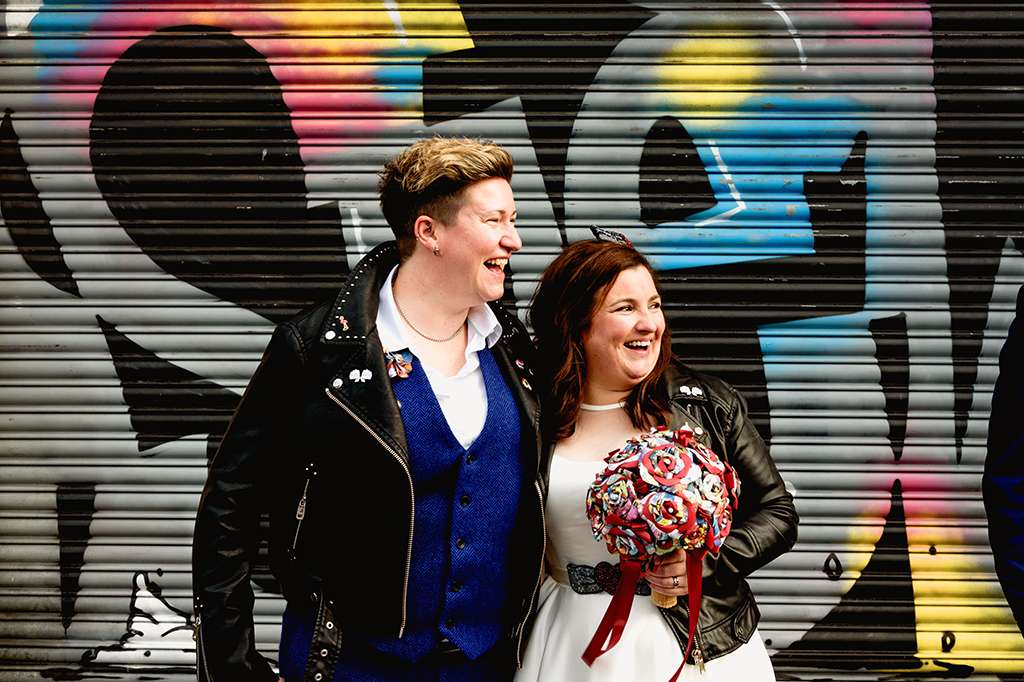 When asked if they had any advice for future couples, Becca and Suzy urge you to abide by the classic Rock n Roll Bride mantra of ‘Just do what you want!’ “We started our trying to make decisions that would please everyone,” said Becca, “until we realised it was really only ourselves that needed to be happy. I’m sure we didn’t do things right in some people’s eyes, but to us, our day was perfect, and we wouldn’t have done a single thing differently.” 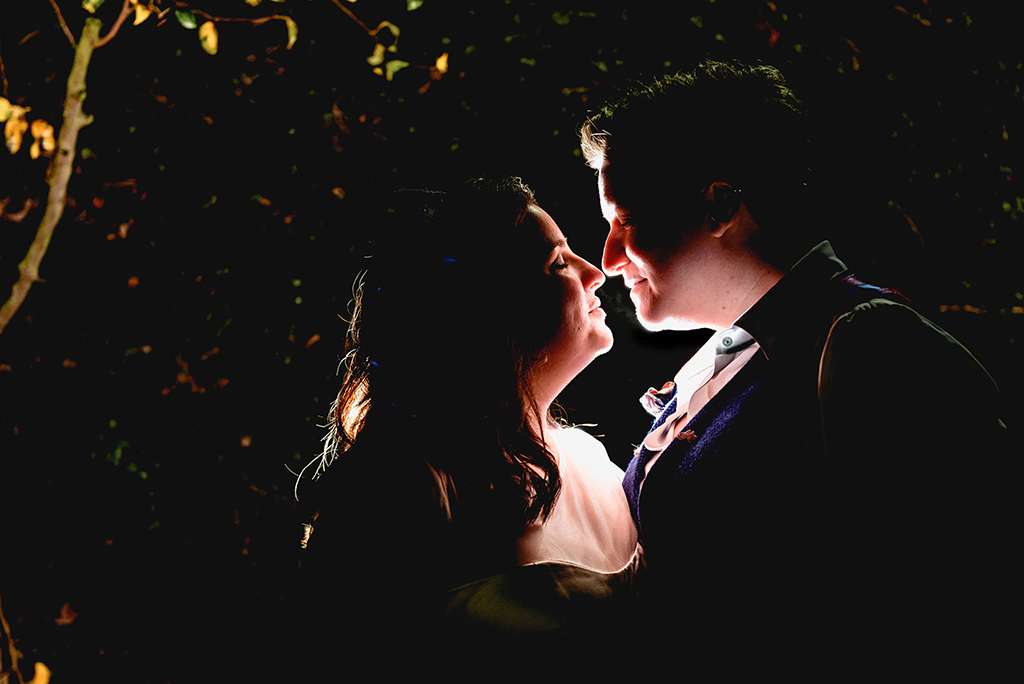 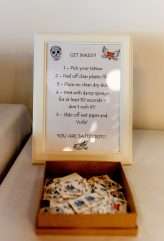 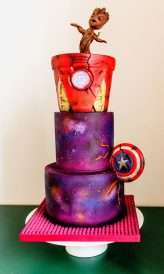 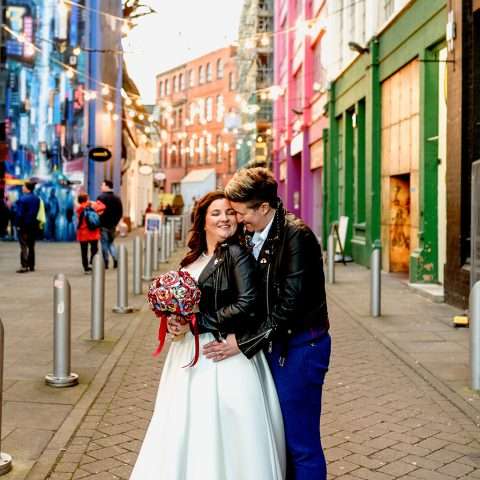 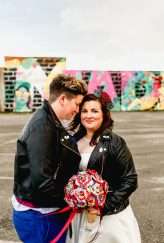 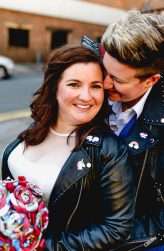 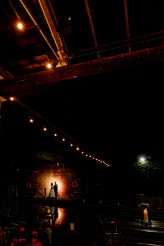 Colourful Comic Book Themed Wedding with a Shit-Ton of Flowers!

It was super important to Drew and Emma to ensure that their wedding day reflected both their personalities, and that it was an explosion of colour! So they mashed together elements from their favourite superhero movies and comics and their love of bright and unusual flowers to create a day that was unashamedly them.

Sara & Lucy were married in a humanist ceremony at Lewes Castle, just outside of Brighton (they did the 'legal bit' a few days before in Brighton register office). Both girls wore coloured dresses. Sara found her 50s floral number at Fur Coat No Knickers and Lucy wore a a grey dress from Pretty Eccentric. The low key reception was held at Bill's Cafe, an organic restaurant in Brighton, which didn't need much decorating. However they added a few personal touches with the table names, the bunting and the flowers. "Bill's organised all decor", the girls told me. "They were amazing."