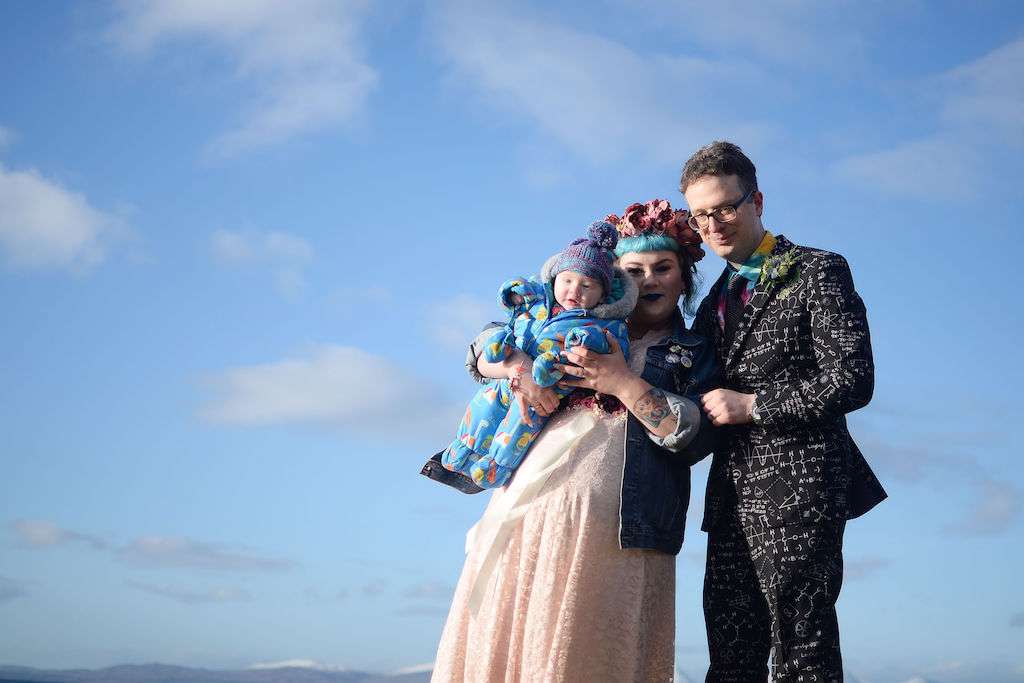 Natalie and Richard combined their stunning Scottish elopement with the naming ceremony for their son (and only guest) Hector Herbert. On the breathtaking and secluded beach at Crear, their dinosaur and science themed ceremony was intimate, personal and perfect! 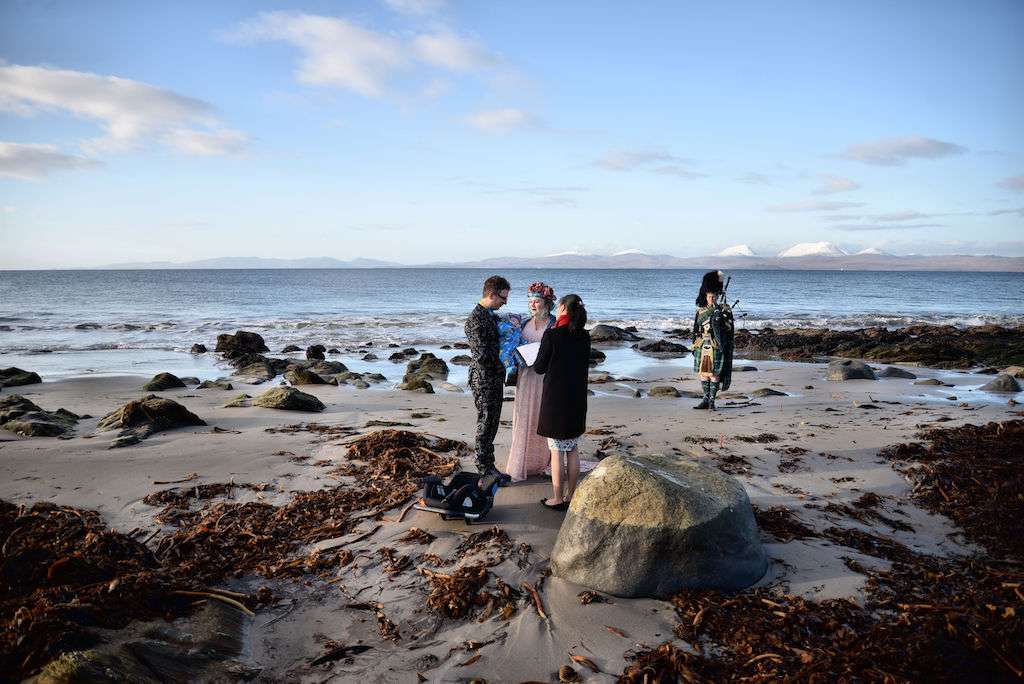 “Our wedding was entirely about our family, the three of us. No one else was invited or knew about it, including our families, which made it feel really special!” Natalie and Richard explain, having driven 340 miles from Yorkshire to get to the beautiful beach at Crear. “The beach was totally secluded – no-one else in sight. We had our celebrant, Karen Dickson, a bagpiper and our photographers, and that was it!” 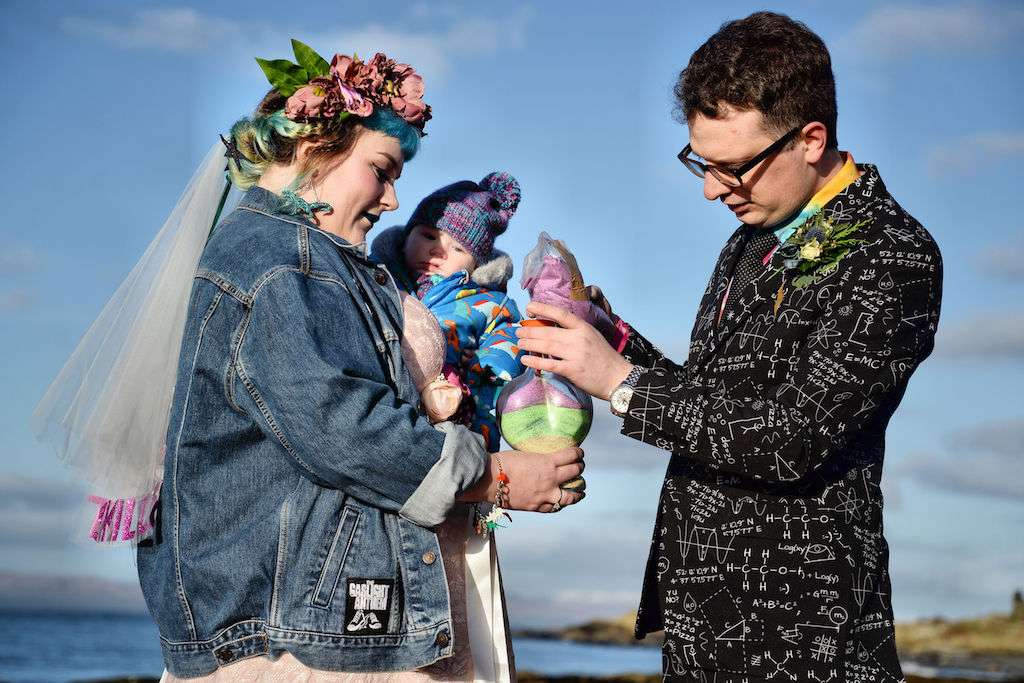 “It also included a humanist naming ceremony for our son Hector. We had a sand ceremony on the beach where we poured three different coloured sands into a heart-shaped vase representing each one of us. We did accidentally drop some glittery sand on the beach, which is appropriate as I do tend to leave glitter everywhere I go,” Natalie remembers. 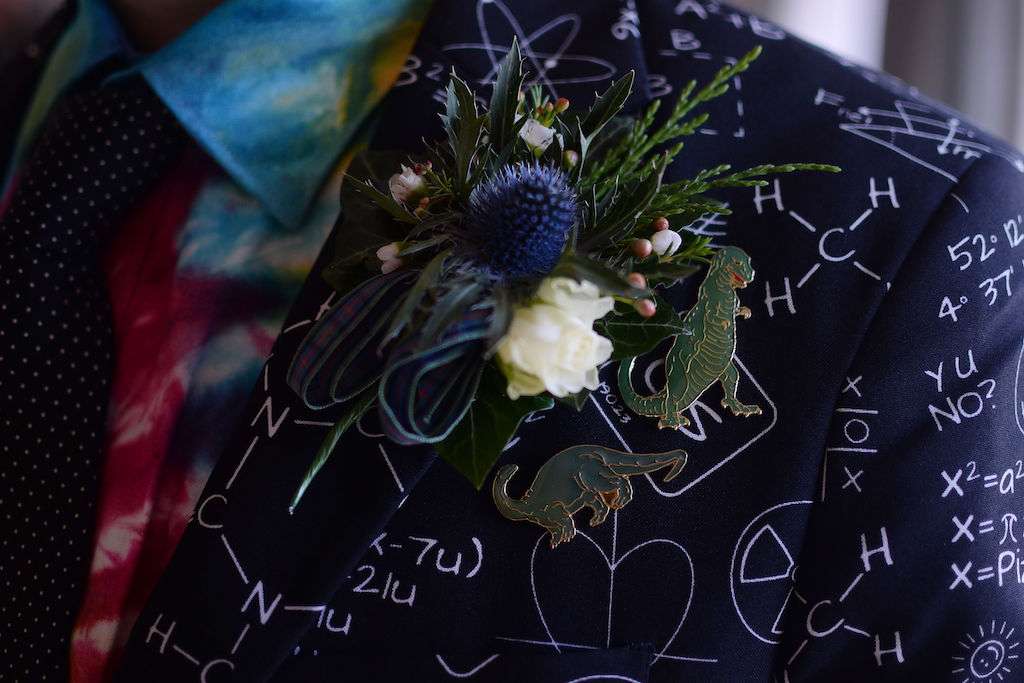 “Creating a cohesive yet uniquely us day so centred around our son was by far the best part of wedding planning.” she continues. “Hector was their ring bearer, wearing a dinosaur shirt, braces and a dinosaur coat. Richard wore an Opposuits two-piece suit covered in scientific equations, a DIY tie-dyed shirt (tie-diyed, you heard it here first), and a vintage dinosaur tie to match his dinosaur pin badges.” 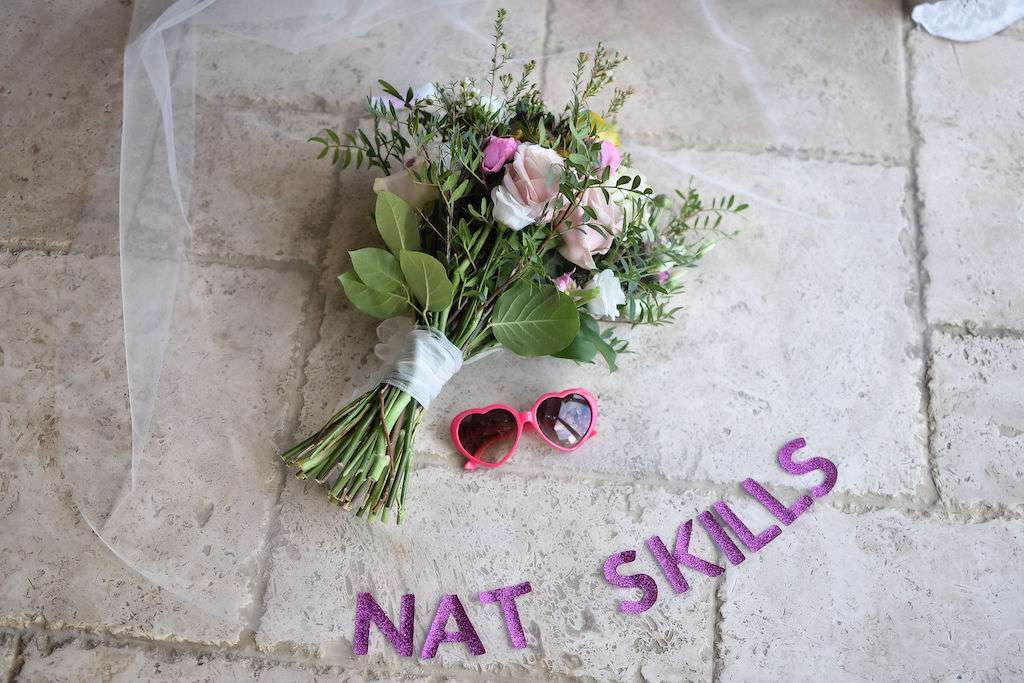 Natalie wore a dusky pink lace from Baylis & Knight, which she wore with a vintage Levi’s jacket from Frock & Roll Vintage that she’d customised with some just married badges. She also wore a Rock n Roll Bride x Crown and Glory veil saying ‘NAT SKILLS’ and a Crown and Glory flower crown, which – yep, you guessed it – they added dinosaurs too! She finished off her bridal look with dinosaur earrings, a vintage necklace and a bracelet from Sour Cherry. They even had bespectacled dinosaur toppers on their Unique Cake Boutique cake, with a bride, groom, and baby dino atop it. 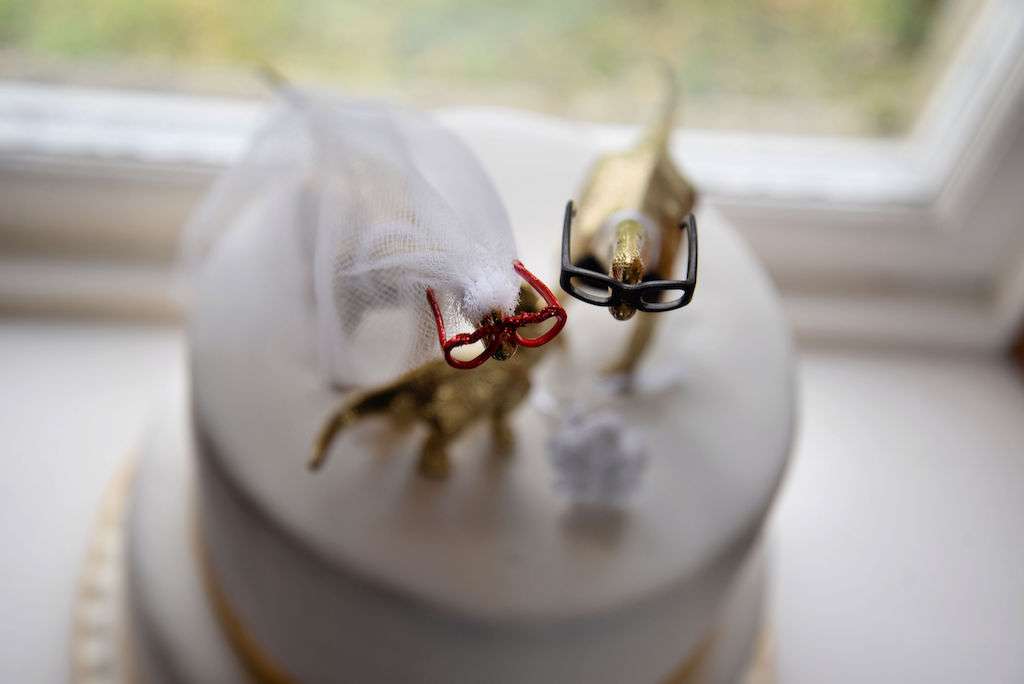 “It was important to us to include our son and have both ceremonies be non religious but still outline our values and the Humanist ceremony really allowed us to do that.” Natalie stresses. And we think they smashed it! 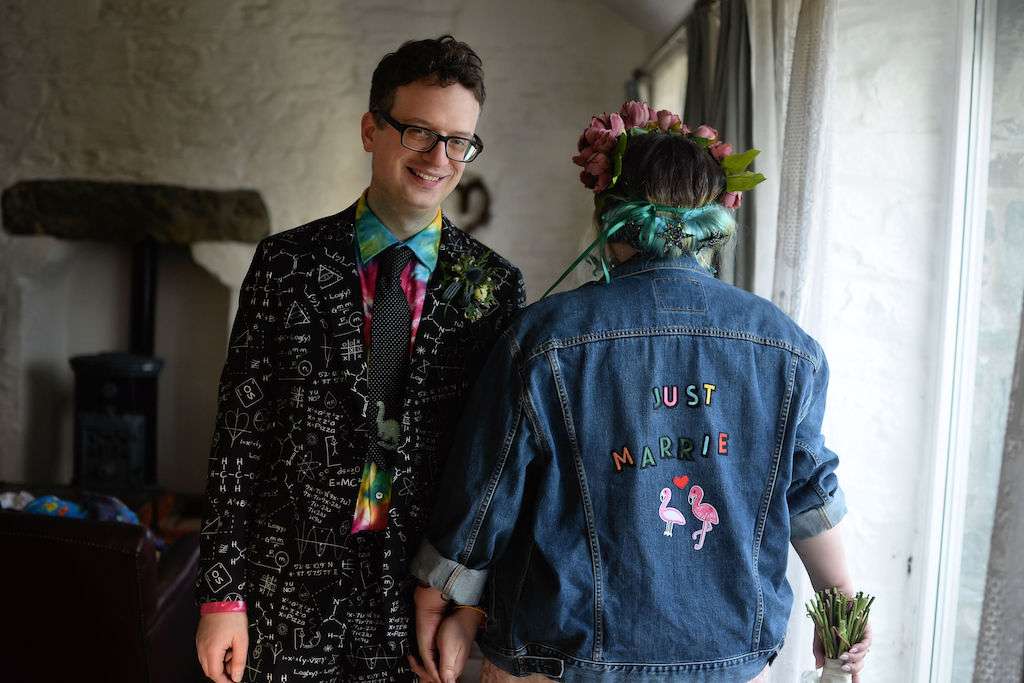 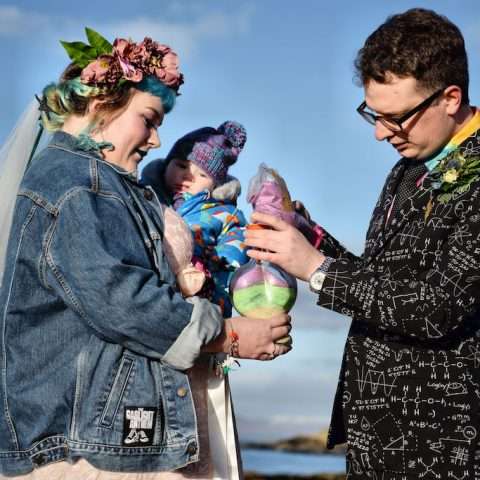 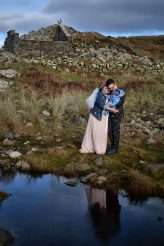 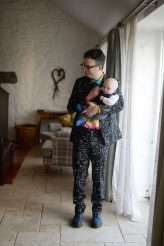 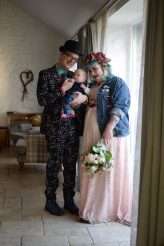 Keri and Sean wanted a wedding theme that included dinosaurs, gnomes, Harry Potter and zombies! They hoped the day would be full of the things they like, to reflect themselves, and to be super relaxed and a whole lot of fun!

Colourful Village Hall Wedding with A Brass Band & a £7000 Budget

They chose a local village hall for their September wedding. This not only meant Bronia and Joe had a lovely blank canvas to decorate however they liked, but it was a really affordable option (£500 to have it from Friday morning to Sunday!) The groom wanted a really big wedding, but the bride wanted to elope, in the end they met in the middle (ahhh, the secret to a happy marriage right?!) and had something medium sized but relaxed and informal.

Dianna and Nathan are big fans of Lord of the Rings, but aren't fans of being the centre of attention. They decided that an elopement (from one hemisphere to the other!) and a ceremony held in The Shire-esque Puck's Glen in Scotland was the perfect solution, especially as a forest location was high on the wish list for their day.

Misty Scottish Wedding in a Polytunnel with a Pink Veil

Barbara and Scott had a big, family-centric wedding in Scotland in a poly-tunnel on the grounds, Colstoun House, a beautiful house and stable conversion. With colourful seasonal wild flowers, local hops and lots of personal touches. Their centrepieces included Disney princesses, dinosaurs and gin bottles for each table.

and Alex's Friday 13th elopement was their dream party and gave them the chance to wear and be surrounded by the things they find most beautiful in the world.

Isle of Skye Elopement With Rooftop Party & Dancing In The Street