Dianna and Nathan are big fans of Lord of the Rings, but aren’t fans of being the centre of attention. They decided that an elopement (from one hemisphere to the other!) and a ceremony held in The Shire-esque Puck’s Glen in Scotland was the perfect solution, especially as a forest location was high on the wish list for their day.

“Nathan and I had always wanted to travel overseas to the UK and Europe, and had been planning to do so for about seven years before we got engaged. As I grew up with my grandparents, who were Scottish, I had always wanted to visit, so when plans were finally made and our flights booked, we decided we would elope at the same time and find the perfect setting in Scotland, as a nod to my family heritage.” 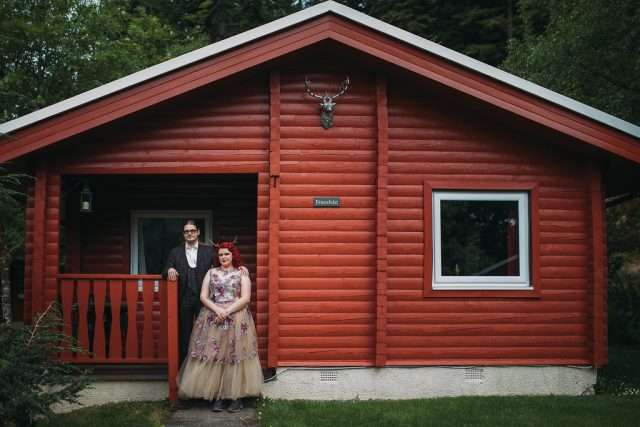 Being an elopement, the wedding party was small and intimate. Dianna said, “We flew over to Scotland all the way from Australia with just our celebrant Moira, meeting our photographers Jo and Liam (who also doubled as our witnesses) there on the day.” It also helped keep the budget to under £5,000. “Not including the flights, as we were already coming over, we spent the most on our outfits, and as we had eloped we didn’t need to spend any money on venue hire or food and music, etc.”

As they were staying in a small log cabin next to the glen, the bride said, “We helped each other get ready in the morning, and we wrote our vows to each other the night before – everything was fairly spontaneous.” 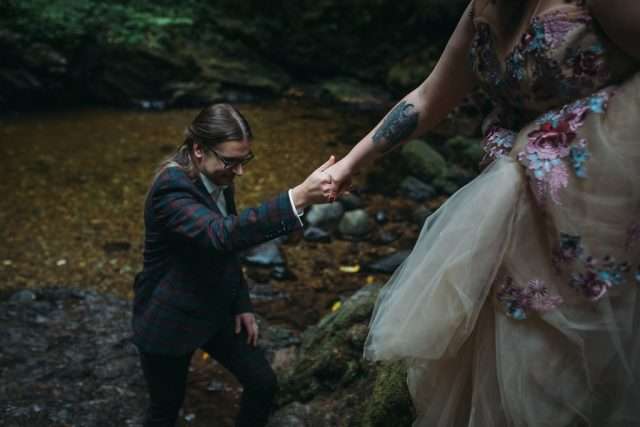 That ‘go with the flow’ vibe even included finding the place where the vows would be exchanged only the day before. Dianna said, “We went for a walk through the forest to find a spot for the ceremony. We came to a shallow pool with a waterfall running into it, and rock islands in the centre, and we knew it was perfect.” 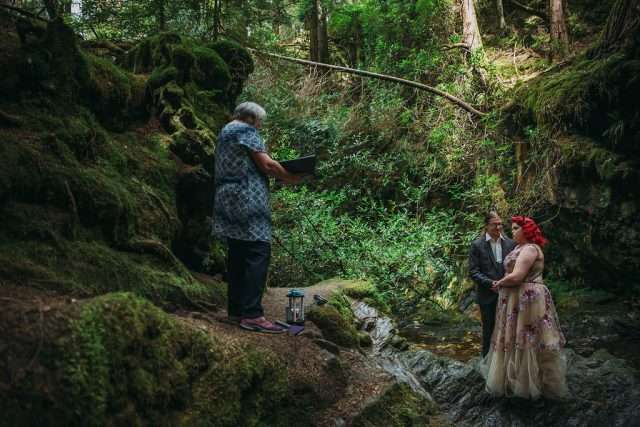 “We decided on having a humanist ceremony that was personalised to us and our relationship, celebrating the journey we had made, and the commitment we were making to each other. Our celebrant helped us incorporate some poems of our own choosing into the ceremony, along with some words of love sent by family. We included the Scottish tradition of a quaich of whiskey, and also used an hourglass we had made as the main symbolic gesture of the ceremony, which involved pouring different colours of sand inside individually to illustrate the joining of two lives into one for the rest of time.” 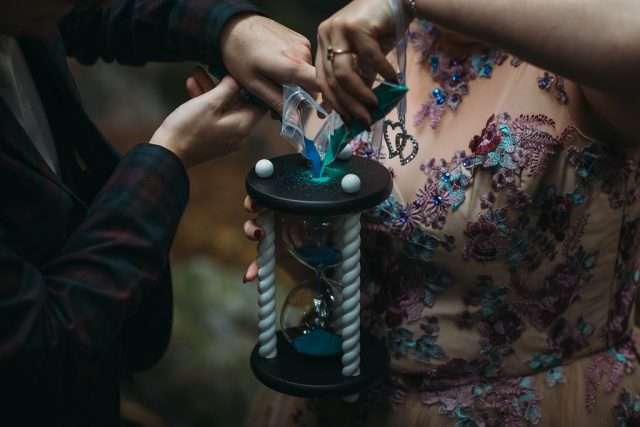 Their favourite part of the wedding was, “Hearing each other’s vows and the well wishes from home, whilst in a beautiful and personally significant surrounding, and the fact that we had the one clear day of no rain for it, as the whole week beforehand has been pouring down!”

Their beautiful outfits held significance to the location and setting. Dianna wore a dress by Chotronette, adorned with heather-coloured flowers, vintage shoes and an antler headpiece by Hysteria Machine that nodded to the forest imagery. Nathan’s tartan suit came from Noose & Monkey. 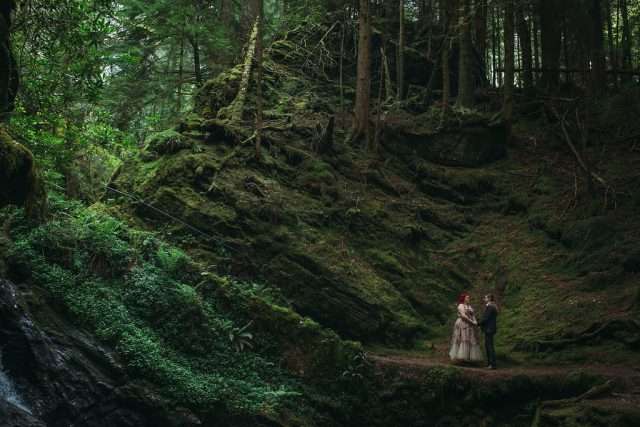 Planning a wedding from the other side of the world is no easy feat, as they discovered, “Because we’re both from Australia and planned on getting married abroad we were pretty unsure of the processes required to be able to legally marry outside of our home country. As we had booked our flights and planned the holiday before also deciding to get married on our trip, we were put on a very narrow deadline for submitting all the required paperwork and visas, which at times was extremely stressful and nerve-wracking, so much so that we managed to just have all our paperwork submitted the day before our required deadline! So I would definitely advise couples planning on doing similar to do their research and give themselves enough time. It saves from so much stress later! ” 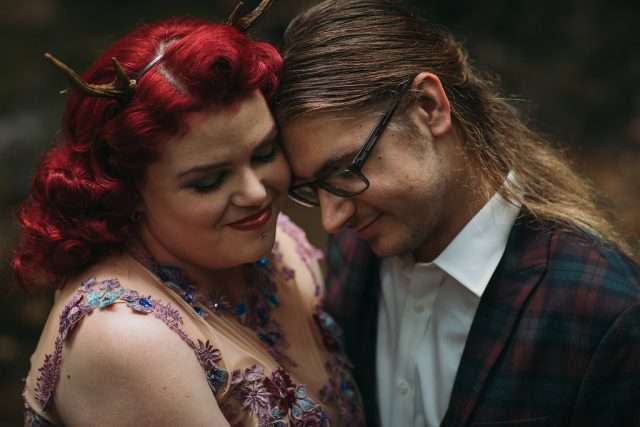 The best part of planning, the couple said, was, “Finding a nice setting and good people to help us with everything. We spoke to our photographer and celebrant over Skype in the months leading up to the wedding to get to know them a little beforehand, which was both fun and reassuring. Despite all this, we were still leaving a lot to chance, which made things exciting as we weren’t sure how everything would come together on the day. It really was very spontaneous.”

Dianna and Nathan had this to say to future couples, “Follow your heart and have the courage to do it your own way. The day is about you and celebrating your love for each other, so do what makes you happy!” 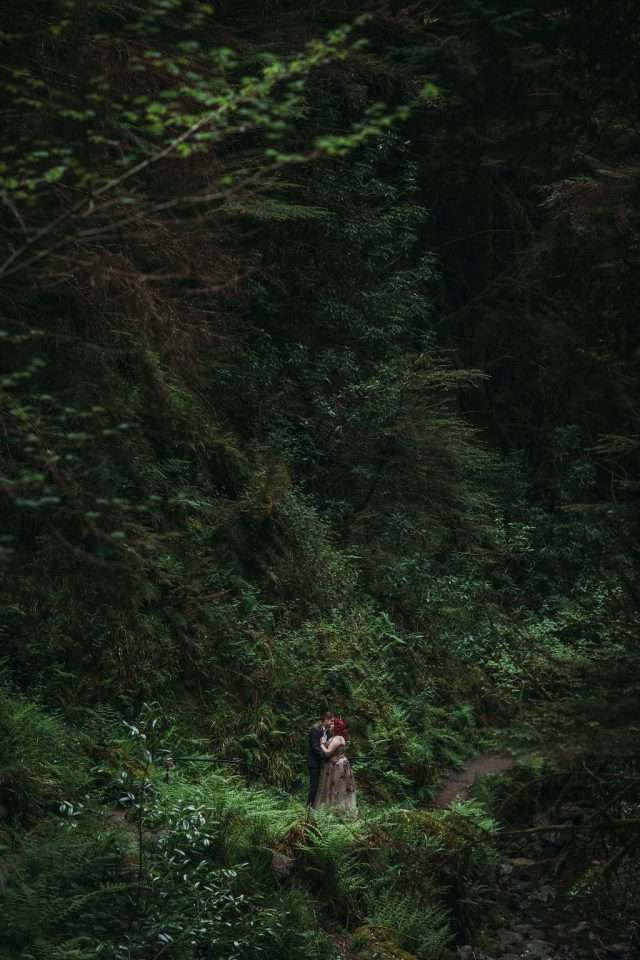 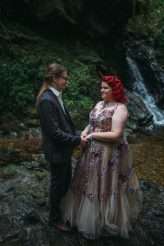 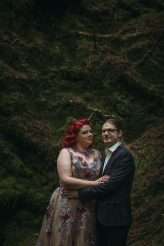 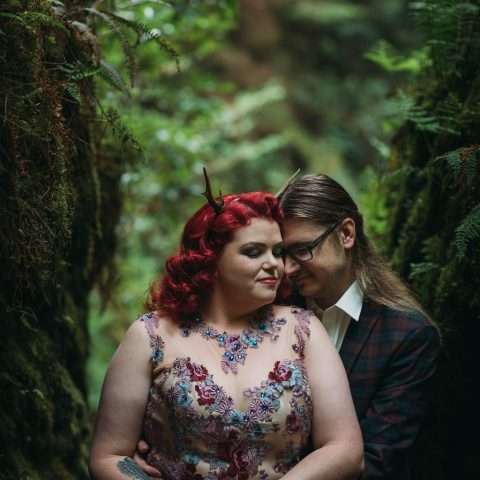 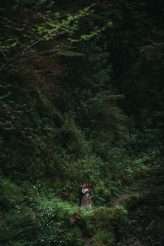 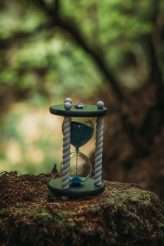 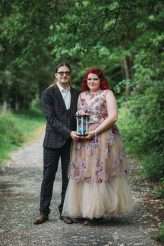 the perfect location for their low-key hillside wedding weekend. On day one they had a pub quiz night, where they snuck off to have their secret ceremony under the stars and day two was spent on a hillside with incredible views over the Solway Firth and to the Lake District.

Fantasy Woodland Vegan Wedding with a Lord Of The Rings Theme

When a wedding is described as "Midsummer Night's Dream meets Lord of The Rings", you know it's going to be pretty unique, and Natalia and Steven's day certainly lives up to this promise. They even dared guests to outdo the bride and groom within the realm of the 'fancy dress' theme they'd set!

Natalie and Richard combined their stunning Scottish elopement with the naming ceremony for their son (and only guest) Hector Herbert. On the breathtaking and secluded beach at Crear, their dinosaur and science themed ceremony was intimate, personal and perfect!

and Alex's Friday 13th elopement was their dream party and gave them the chance to wear and be surrounded by the things they find most beautiful in the world.

Isle of Skye Elopement With Rooftop Party & Dancing In The Street