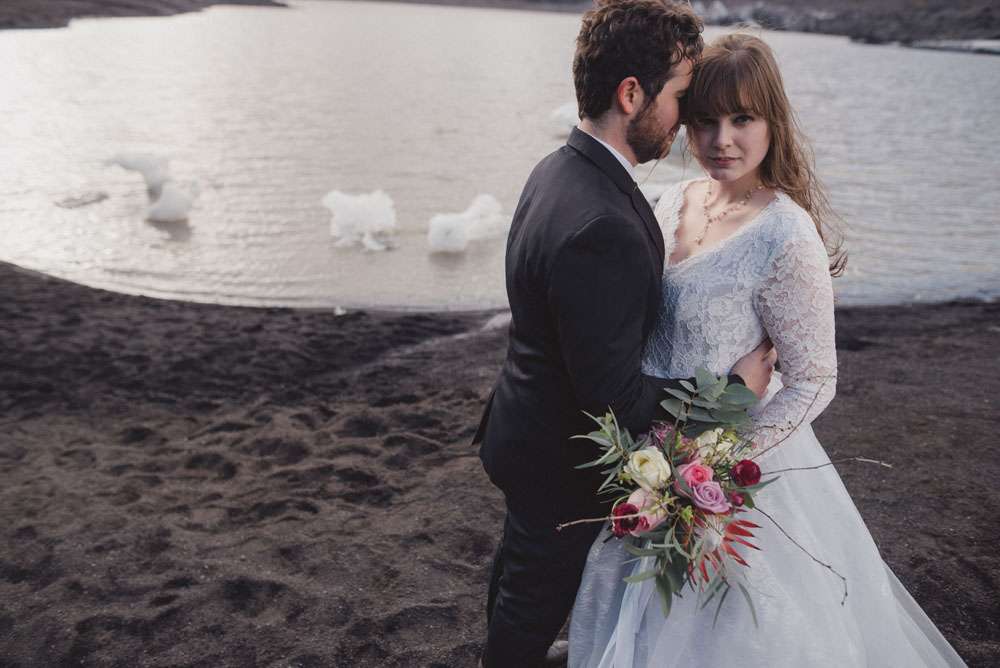 Elopements are probably one of my favourite kinds of weddings to publish. There’s just something so romantic and so ‘We don’t give a fuck what you think’ about them. Plus, when a couple elopes somewhere as spectacularly beautiful as Iceland, you just know the photographs are going to be completely and utterly wonderful.

Katie and Joe flew to Iceland from the the US for their secret wedding in April. “We planned our Icelandic elopement together with the help of our brilliant photographer, Rebecca Douglas from the UK”, said Katie. “We approached Rebecca with a general idea of what we wanted our wedding day to look and feel like and she made the magic happen!” 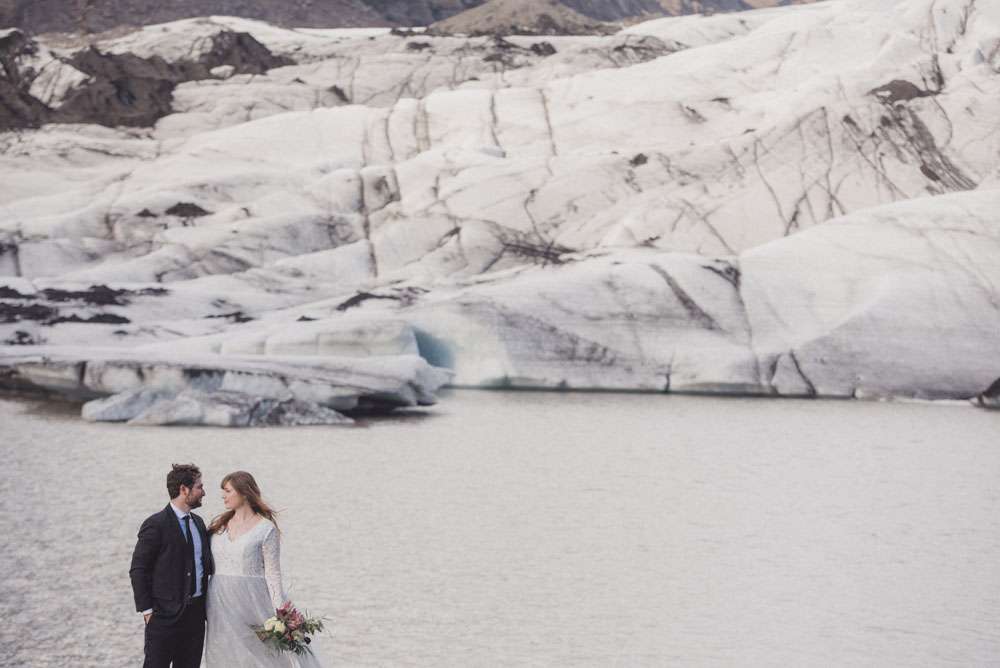 “We married each other at sunset on the black sand shores of Reynisfjara near Vik. Joe and I both wanted to write our vows in Iceland, surrounded by the beautiful scenery, excitement, and romance of eloping together. I wrote my vows the morning of our wedding and Joe wrote his vows in Rebecca’s car as we travelled between shoot locations! We were married again afterwards in a little court house in Pennsylvania to legalise our marriage in the United States.”

Katie’s dress was custom made for her by Weekend Wedding Dress who she found on Etsy. “When I first approached the designer, Emi, I knew a traditional white wedding dress wasn’t the right for me.” she explained. “I wanted an icy blue, lace dress, something timeless and unique to match Iceland’s scenery. I wore it with North Face hiking boots which were perfect for hiking up a glacier on our big day!” 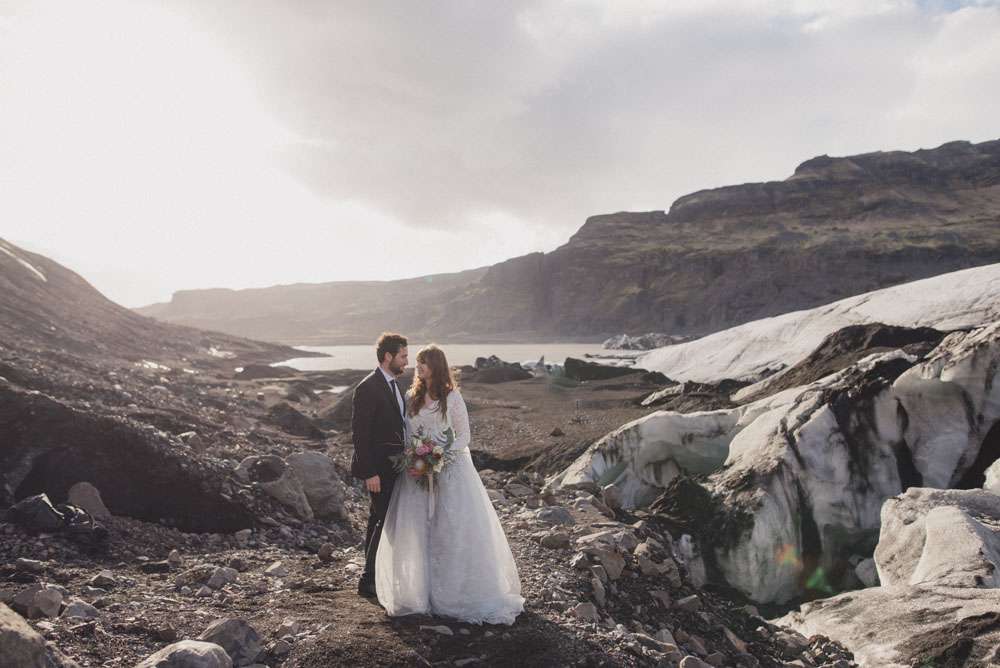 The bride is a florist by trade so she made her own bouquet, but they did find a local florist to supply the flowers. “As a florist, I was so excited to finally create my own wedding bouquet. I didn’t have a specific vision in mind until Joe and I stumbled on a flower stand in The Harpa in Reykjavik. I immediately spotted a King Protea (one of my favourite flowers) as we approached the stand and fell in love. I grabbed a few pink and white roses, pink spray roses, burgundy ranunculus, eucalyptus, and sprigs of willow to accompany the King and used it as the focal point of my bouquet. After we got back to our Air BnB I put the bouquet together using a pair of poultry scissors to cut the stems, picked a few more branches off a bush outside, and put my bouquet together on the floor of our BnB’s bathroom. I wrapped it in silk and willow ribbons to complete its look.” 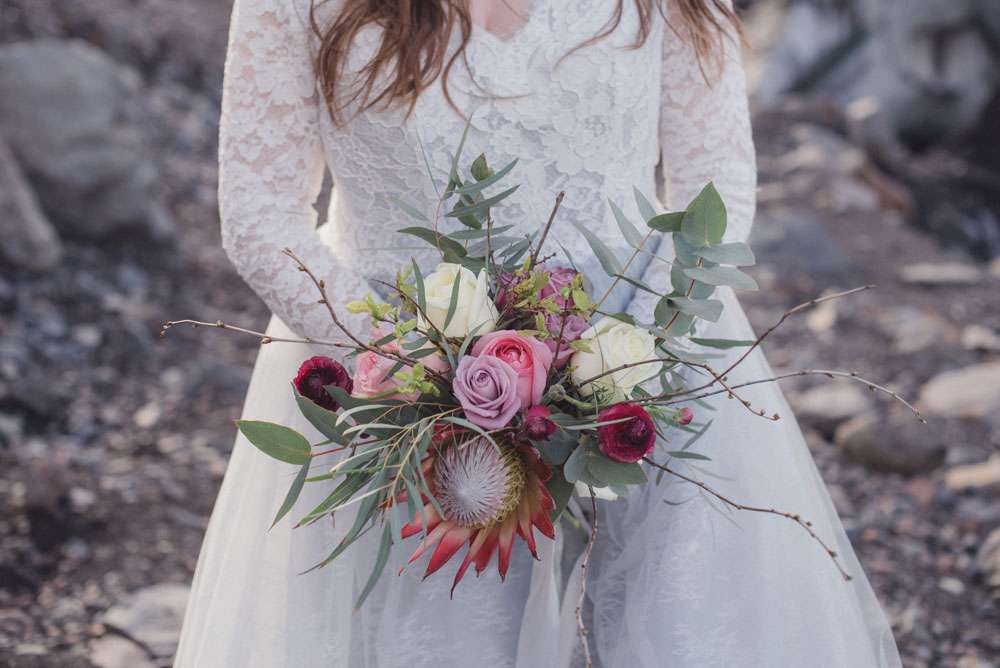 The wedding theme was completely centred around the landscape of Iceland and the two of them as a couple. “We’ve never really played by the book. We started living together before actually dating and fell in love in our home, so after we got engaged we both knew we wanted a wedding that was as unique as how we fell in love. Iceland was the perfect backdrop for us – wild, romantic, intimate, and beautiful.” 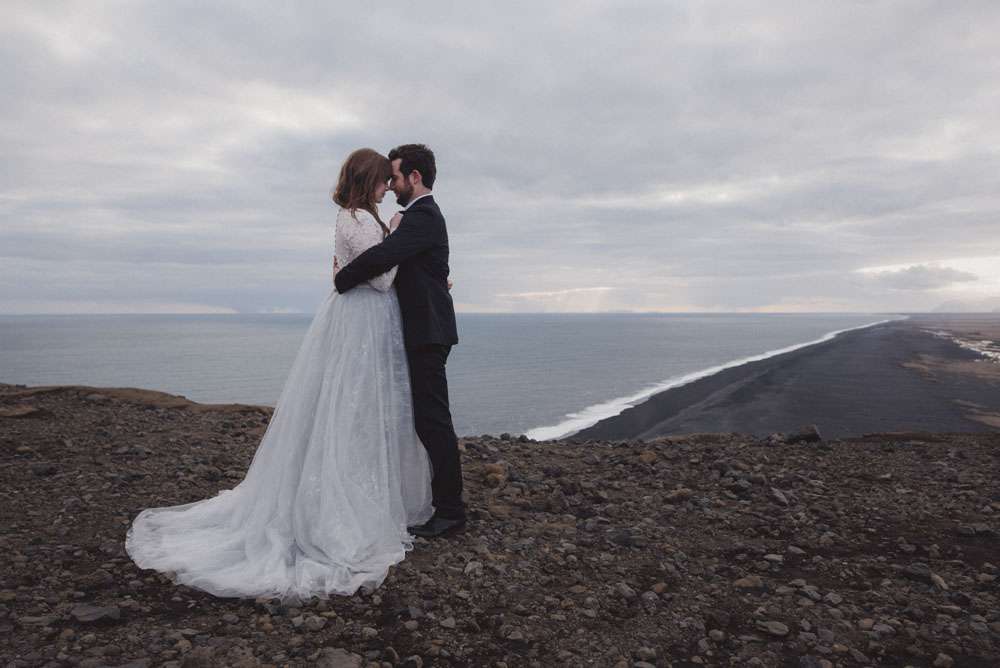 “Some of our favourite things about our wedding were that on the day we hiked up a glacier in our wedding clothes, travelled up the side of a sea cliff, married each other on a black sand beach, and chased auroras until almost 2AM. We knew our wedding day was a once-in-a-lifetime opportunity, so we wanted to go hard! We barely even stopped to eat. We ate smoked salmon and egg sandwiches from a gas station and sipped champagne in the back of Rebecca’s car. What was extra special for us was the privacy of saying our vows to only each other and holding each other on the beach as the sun set.” 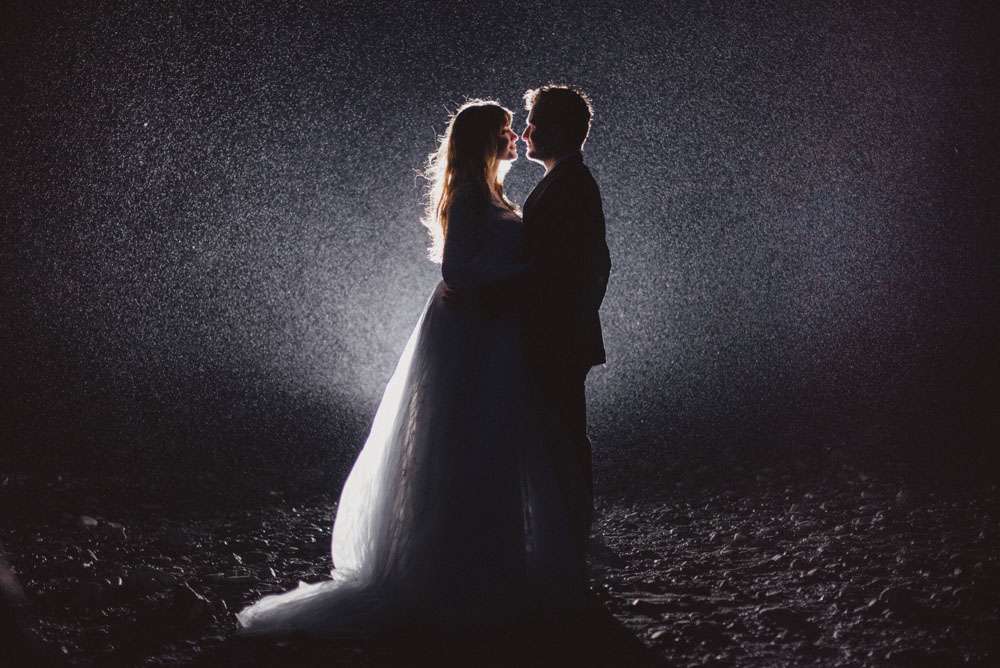 “Sunset in Iceland in April is right around 9:30PM, so we arrived a little before 9 to scope out the perfect place to say our vows. We found a little enclave by some basalt cliffs on the shore and took a few pictures with Rebecca on the cliffs before heading over to the enclave to say our vows. The ceremony was just Joe and I on the beach with our vows, written in our journals. He went first and I followed before exchanging our rings which Joe had stashed in his pocket all day. The ceremony was sweet and romantic and quiet, and felt just like our relationship – it was perfect.” 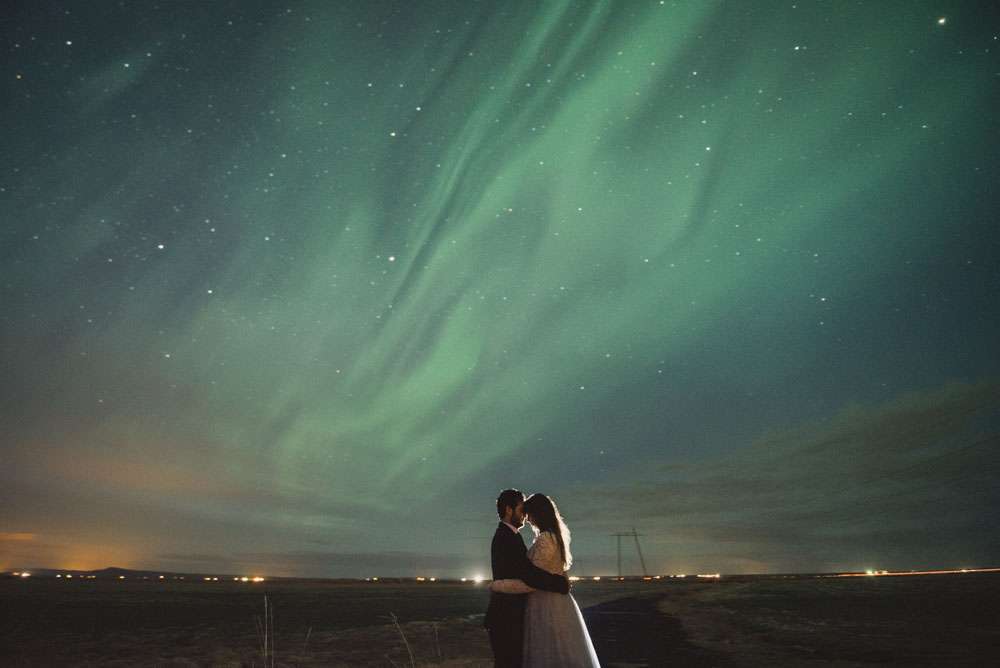 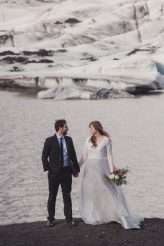 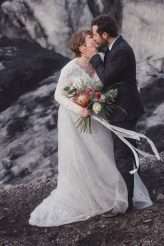 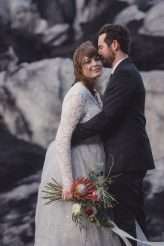 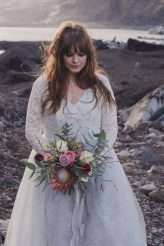 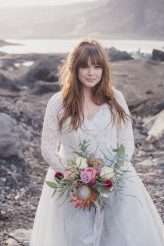 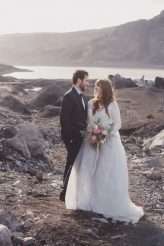 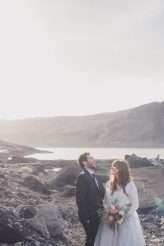 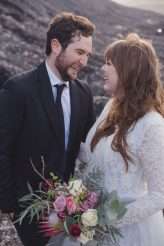 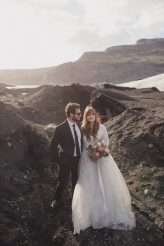 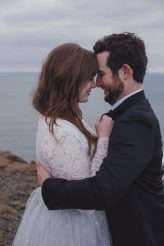 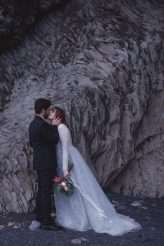 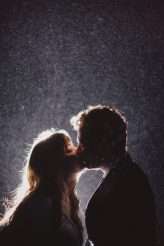 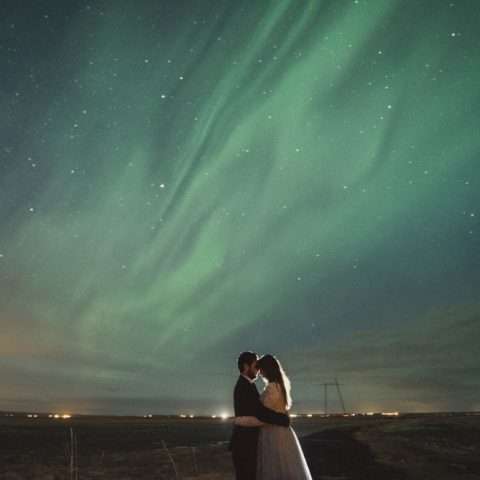