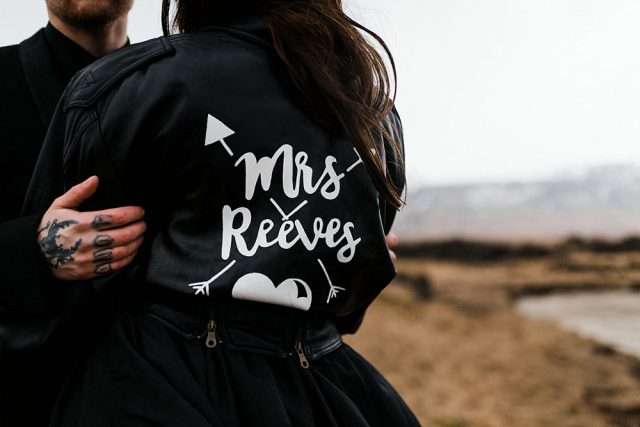 They found that eloping gave them the freedom to have their day their way, and to leave out any traditions that they didn’t like. “As we weren’t telling anyone about the wedding, we obviously didn’t have any guests,” began Linsey. “As a result of this we didn’t feel like we had to do anything to please anyone else so we didn’t have to do anything traditional. Instead we could focus on making the day our own. We feel the location and photographs also made the wedding unique. We spent two days travelling around Iceland to find the best places to take pictures. It became an experience more than a typical event.” 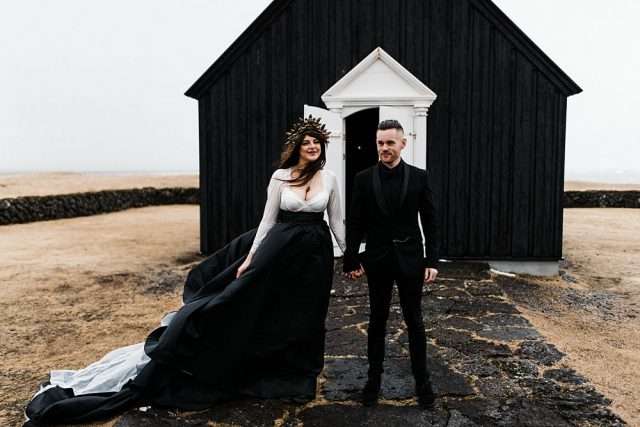 Eloping also made the planning process much easier for them. “Planning the wedding was actually really stress-free. We checked the availability for the ceremony and once we had that everything else fitted around it. The hardest part was getting all the paperwork sorted for the authorities in Iceland. We had a direct line of communication with them and they were really helpful, really was all so easy! We loved that we got to do everything together and with no influence or pressure from anyone else.” 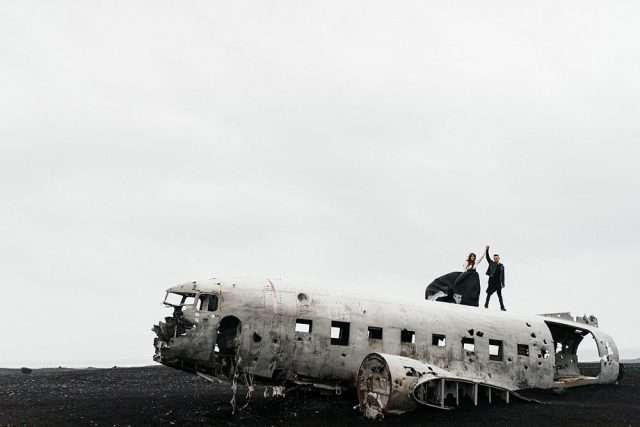 “The ceremony was exactly how we had hoped”, she continued. “It was really relaxed and Pal, who officiated the ceremony, had a great sense of humour. He, and his assistant, made us feel really welcomed and we quickly forgot we were the only people in the church. Pal read an excerpt from Captain Corelli’s Mandolin and we then each read the vows we wrote for each other. It probably sounds unoriginal but the ceremony was our favourite part of the day. Being alone in a little black church on a lava field, surrounded by mountains and the ocean, exchanging handwritten vows with the one person that holds your heart, with our baby girl being just a little bump, was beyond anything we could have hoped for.” 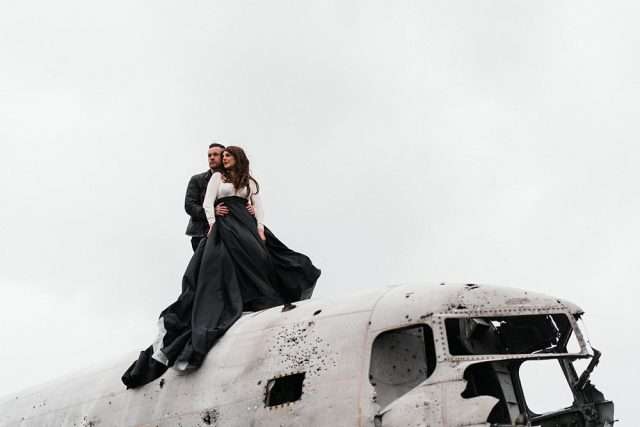 “As we were eloping and as wedding photographers ourselves, the photographer was such a key element in our time in Iceland”, she explained. “We found a talented photographer who, fortunately for us had Iceland on his bucket list and shared the same visions and ideas as we held for our elopement. We couldn’t have been happier with the images Per created for us!” 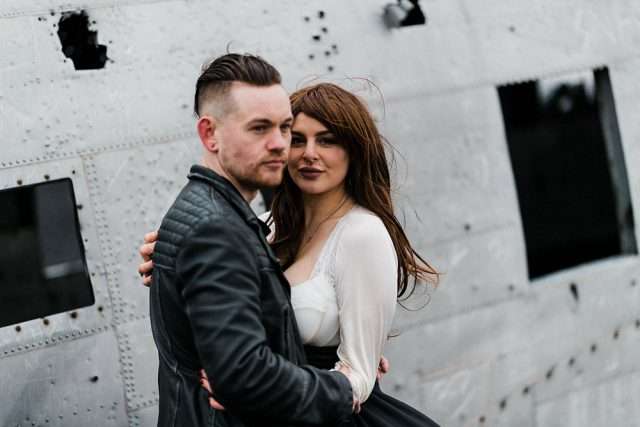 In total they spent £6000 for the wedding and the trip around Iceland, and their biggest expense was accommodation. “We could have done things cheaper but why not spoil yourselves when you’re eloping? We booked a breathtaking penthouse apartment in Reykjavik with a huge balcony and hot tub on it overlooking the city skyline.” 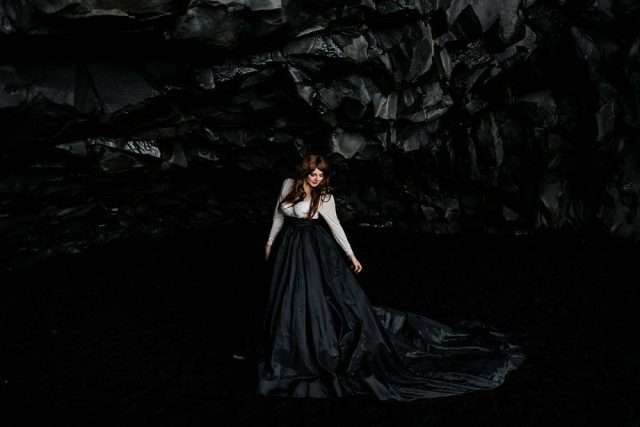 “We wanted to stay true to ourselves and decided on buying things that we were so in love with, which we could wear over and over again. I made massive savings on our leather jackets, my jewellery, my vintage body top and my Dr Martens. My skirt was also a huge saving. I fell in love with a designer skirt but at $7000 it was out of the question, so I decided to get something similar made. It had so many layers and a huge train and I was in love with it as soon as it arrived! It took two weeks to make and was shipped over from China within a week, all for the price of £90!! The only concern was my growing bump and fitting into the skirt but luckily I opted for a high-waisted design to sit over the bump and added an extra inch on the measurements so it fit perfectly.” 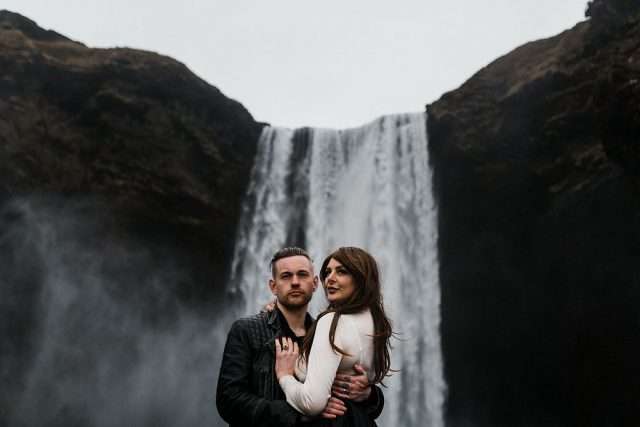 “Our advice for future brides and grooms is elope!!” she concluded. “Honestly, it was the best decision we ever made. There’s so much pressure, influence and stress from other people when it really should just be about you two. It was quite the unconventional wedding; we got ready together listening to 80s music, walked out holding hands into a little black church to get married, climbed onto plane wrecks, walked black beaches and in caves, went under waterfalls and road tripped around Iceland…. It was perfect. Running along the Icelandic coastline and over a stone arch across the ocean whilst pregnant with a dress hitched up in the pouring rain, whilst everyone else was dressed head to toe in extreme outdoor clothing was quite the memory!” 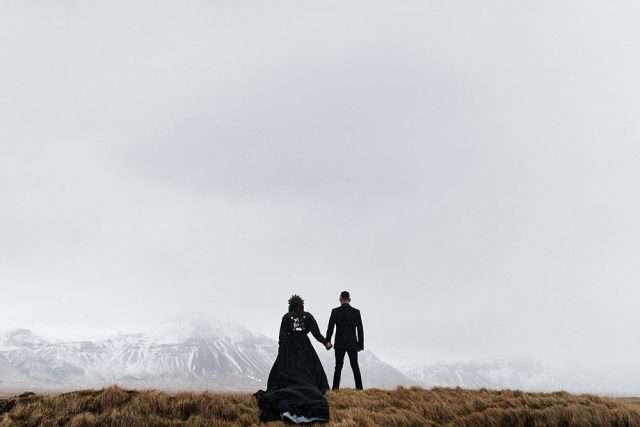 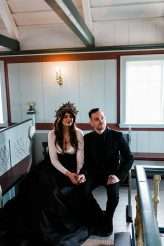 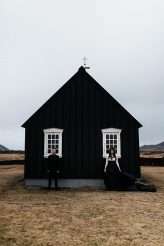 Elopements are probably one of my favourite kinds of weddings to publish. There's just something so romantic and so 'We don't give a fuck what you think' about them. Plus, when a couple elopes somewhere as spectacularly beautiful as Iceland, you just know the photographs are going to be completely and utterly wonderful.