Thank you for all your enthusiasm about this new series! My Instagram especially has BLOWN up ever since I started posting about the house and I don’t think I’ve ever had as many messages as I did when I asked if I should start blogging about the renovation.

Today I thought I’d talk you through our overall plans for the house.  Obviously there’s about a billion decor things I want to do (rainbow front door, pink sofa, fabulous wallpaper), but this post is about the more major plans. Build in 1906, it’s pretty damn old, and our survey brought up quite a few things that needed fixing immediately. Namely the joists on the ground floor that all need replacing (most of them are quite rotten) and the sagging lintel above the bay window in the snug which is making it look like it’s about to detach from the house. There are two slightly terrifying cracks next to it, one on either side. FUN!

We’ve already rewired downstairs, and the electrician who came to install the new consumer unit and smoke detectors said our upstairs wiring is actually really good. We’ll still replace it as it is old but its good to know that it’s not urgent.

We’ve also had some drain problems since we moved in. A few weeks ago there was a massive storm and the garage flooded, ARGH! Luckily we didn’t lose anything important, but its just another big job that Gareth now needs to figure out! 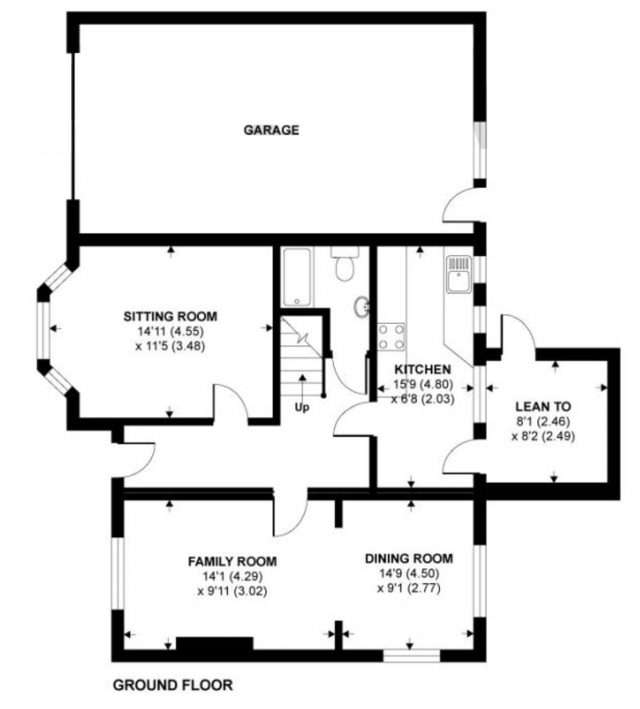 Apart from the things I’ve mentioned above our main plans for the ground floor are:

♥ Knock a door (or maybe the entire wall) through from the dining room to the kitchen.

♥ I really want to replace the window in the dining room with patio doors, but Gareth isn’t convinced because…

♥ Eventually we want to get rid of the lean to and extend out the back and create a huge kitchen/ diner. As you can see the kitchen is pretty small for the size of the house which isn’t ideal. We are planning to rip out and redo the current kitchen (on the cheap) as soon as because it’s incredibly ugly and badly laid out. In all honestly, I don’t think we’ll be able to afford any major building work for a good few years but there’s no way I can live with the kitchen as it is for longer then a few months (fingers crossed!) 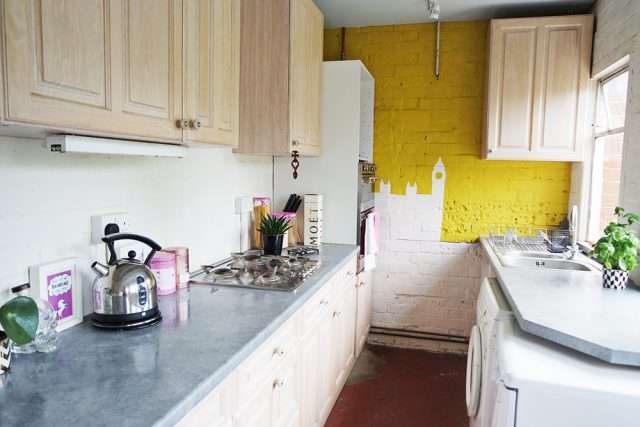 ♥ Get rid of the avocado bathroom under the stairs, replace with just a loo and knock through to the garage so we can access it from the house.

♥  Re-do the driveway, generally tidy up and repaint outside. Get into gardening. 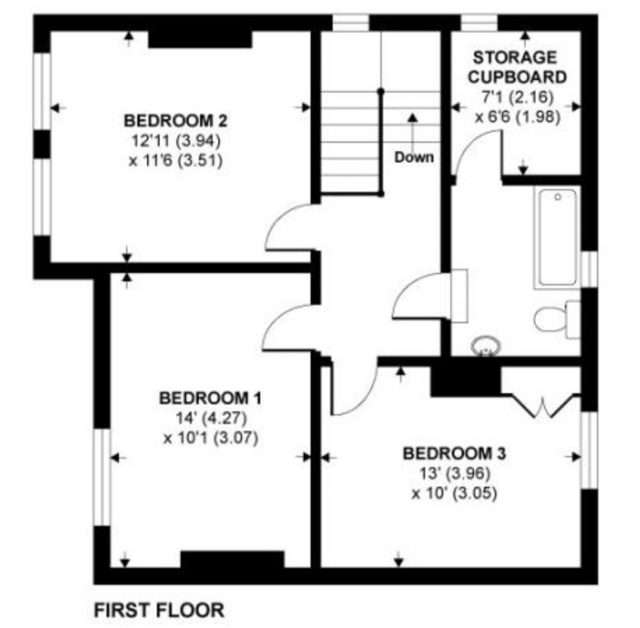 The upstairs actually suits us fine right now. Our bedroom is bedroom 2, bedroom 1 is my office and bedroom 3 is Gareth’s office/ the guest room. While nothing immediately needs doing, down the line we will probably…

♥ Rip out the bathroom suite, knock though to the enormous airing/ storage cupboard (which has the boiler in) and replace with something fabulous… Maybe a wet room? His n hers sinks are a must.

♥ The house actually has planning permission already for a huge extension (the downstairs of which I mentioned above) but also to knock down the garage and replace with another reception room and two bedrooms with en-suites above! As we’re not planning to have children we don’t really think we’ll ever need five bedrooms and three bathrooms, plus we really need the garage for storage (those magazines sure do take up a lot of space). We would like to build a new garage (as the current one leaks ha!) and put one big master bedroom and bathroom above it!

So there we have it, not too much work then (LOL!) and I haven’t even mentioned the photo studio I want to be built down the end of the garden one day..! As I’m sure you can imagine I’m desperate to start picking paint colours and order fun things like floor tiles and furniture but I must be patient. 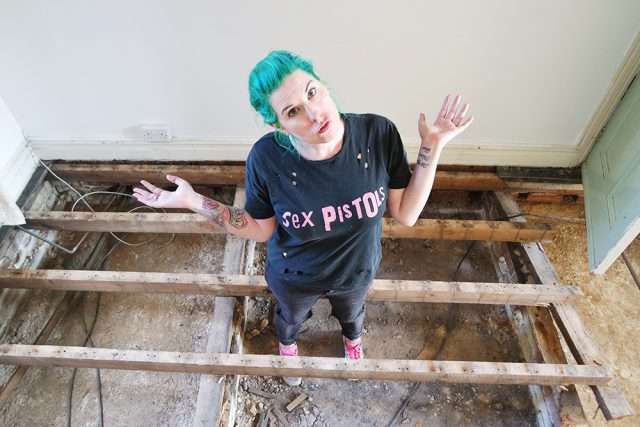 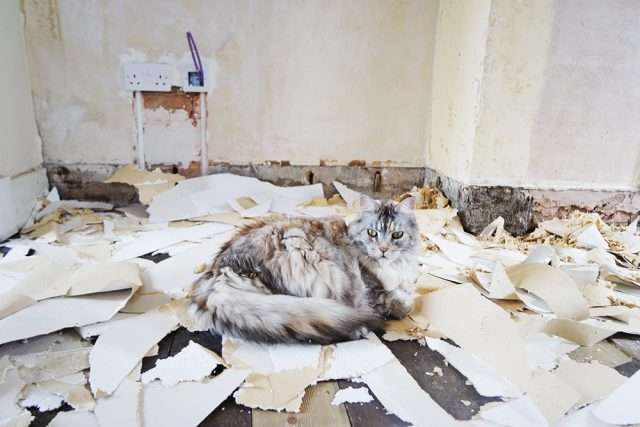 It’s really funny, because people keep saying to us “Oh it’ll be so nice when it’s done” and yes it will, but we honestly think it’s already so nice! Yes, its a bit rough around the edges and could do with some love and TLC but it’s not desperately unlivable.

OK back to stripping wallpaper I go… Happy Sunday everyone!

You're doing the kitchen... in four weeks!?!?" That was pretty much the standard response we got when telling people about our insane plan to gut and basically rebuild our entire kitchen in a month. So why the ridiculous time frame? Well, we were invited to take part in Revamp, Restyle, Reveal - a challenge with ten bloggers, nine sponsors, one room (of our choice) and four weeks to make it over... And well, apparently my husband and I are suckers for punishment.

OMEDELBAR from IKEA: Gothic Meets Hollywood Glamour for your Home!

There are two great life lessons I've learnt since embarking on our renovation project: Everything will take 1716 times longer than you hoped it would, and IKEA is basically brilliant. OK so I knew the latter already, but when you have people coming around for your first attempt at hosting Christmas Eve and you realise that morning that you haven't got enough chairs for everyone... Well let's just say I thank those Swedish home gods everyday that they decided to open a branch in Reading.

One of the most stressful, yet satisfying, house projects we've done so far is our kitchen which we did last summer in just a month (!) as part of an interior's challenge called Revamp, Restyle, Reveal. For those of you who missed it, here's the drill: A group of sucker-for-punishment bloggers + a selection of generous sponsors + a room of our choice + four weeks to make it over = a fuck load of unexpected stress, a ferociously active group chat and a whole heap of fun!

Gosh, thank you so much for all your lovely comments after my I Need to be Honest with You blog post a few weeks ago. I was so touched by how many of you reached out with love, support and compliments for the blog, it made my heart so happy! It's really difficult when you work for yourself and don't get much feedback. Sometimes it can feel like you're just spinning on an endless hamster wheel with no end in sight, not even knowing if anyone bloody cares. It was so amazing to hear back from you all.

You know those parties that are so much fun you forget entirely to take photos? That's how our house warming was for me! I apologise in advance that this post is a bit light on pictures, but there was too much wine and good times happening to get the camera out.

Rock n Renovation: How to Buy a Project House

I've had so many messages since I started this series from people who are either buying their first house, or buying a renovation project, and are wondering if I have any advice. If you read my first post in this series you will already know that we had a DOOZY of a time trying to secure this place (I'll tell you all about it over something alcoholic one day) so actually, I do have quite a few words of wisdom/ warning (delete as appropriate) for you!

Wow that's a lot of words beginning with R right there. I am so very VERY excited about this project though so all that alliteration is worth it to share the news! Revamp, Restyle, Reveal is an interiors challenge which I was asked to take part in by interior designer Lisa Dawson (I mentioned her in my favourite interiors Instagram accounts a few months ago, isn't it funny how these things always come full circle!?) and blogger extraordinaire Bianca Hall of French for Pineapple. The concept is simple: 10 bloggers, 9 brands, 1 room, 4 weeks. It's kind of like Changing Rooms meets 60 Minute Makeover but without Lawrence Llewelyn-Bowen, Linda Barker or Peter Andre (didn't he present 60 Minute Makeover for a hot minute? It's probably quite shameful that I know that).

I Bought A Custom Neon Sign For My Office!