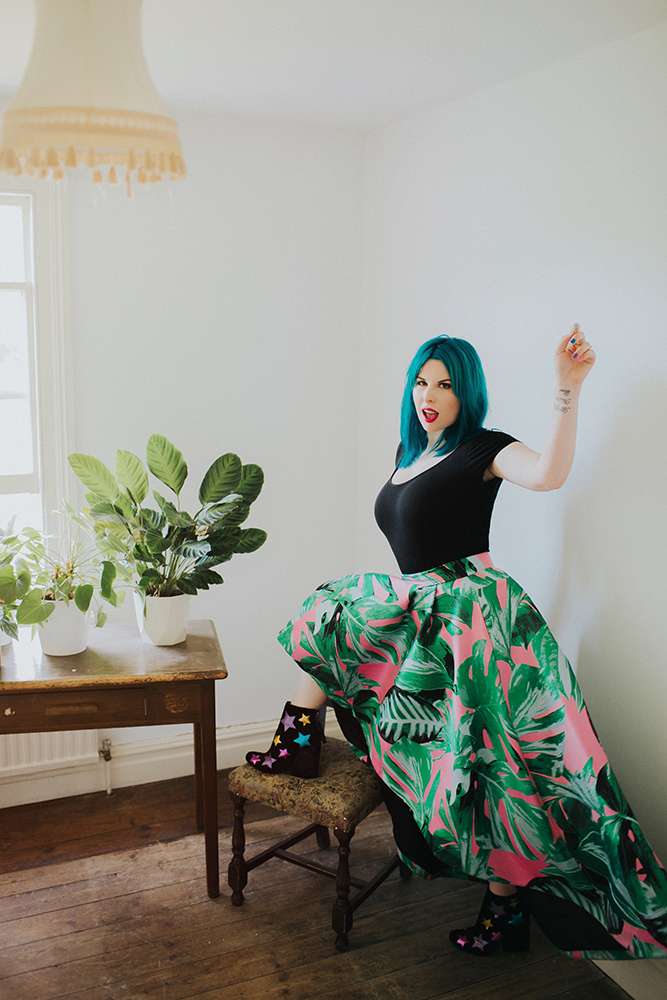 Is this the most ridiculous photo ever taken of me? Probably.

You know those parties that are so much fun you forget entirely to take photos? That’s kinda how our house warming was! I apologise in advance that this post is a bit light on pictures, but there was too much wine and good times happening to get the camera out.

We decided to have our house warming less than a week after we moved in. We wanted it to be a way to thank everyone who had helped us get the house but also for everyone to get the chance to see it in it’s ‘before’ state! This was actually our first time ever hosting a party (well, except our wedding I guess) so we were quite nervous about it! I think it was a hit in the end though (the vodka watermelon probably helped).

What started off as quite a casual get together ended up being a pink vs tropics vs unicorn themed bash for our nearest and dearest. Our invites, designed by my babe Shauna, were totally based on the Coast skirt that I’ve been so obsessed with since I bought it.

I had them printed at printed.com, which was very reasonably priced. I got them in 400gsm and it cost about £12 for 25 invites (although I did have to print them twice because the first batch had the wrong bloody date on them. Whoops!) 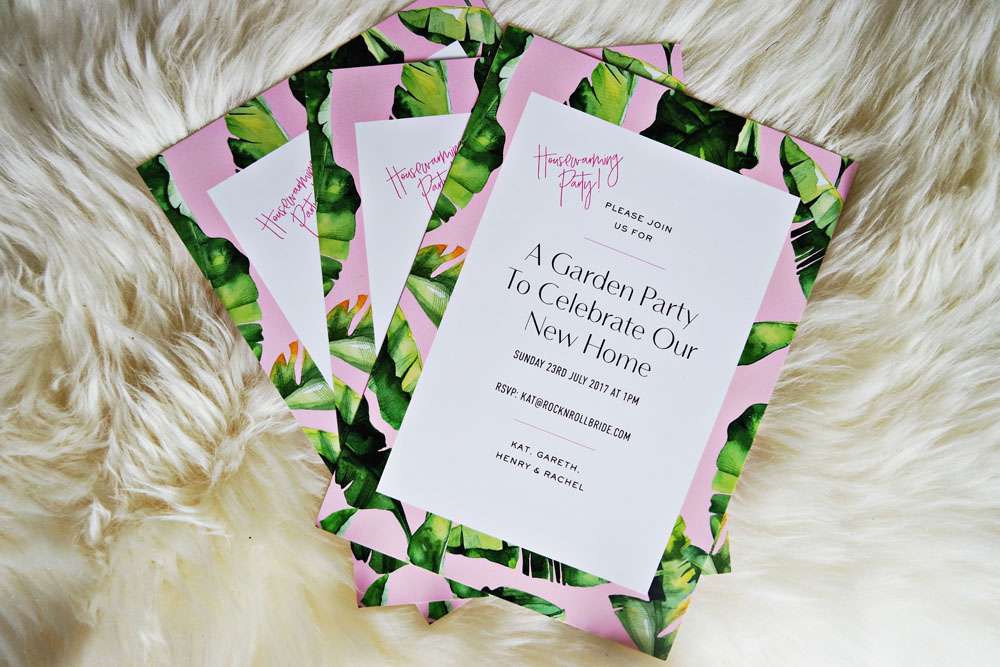 As a theme was starting to emerge I was inspired to pick up some palm leaf napkins from H&M, some cactus covered balloons from Paperchase (neither of which seem to be on their websites, sorry!) and on the day I kind of tried to artfully arrange my succulents and cacti collection around the place. This massive bunch of flowers from Wildabout Flowers also went perfectly with the colour scheme. 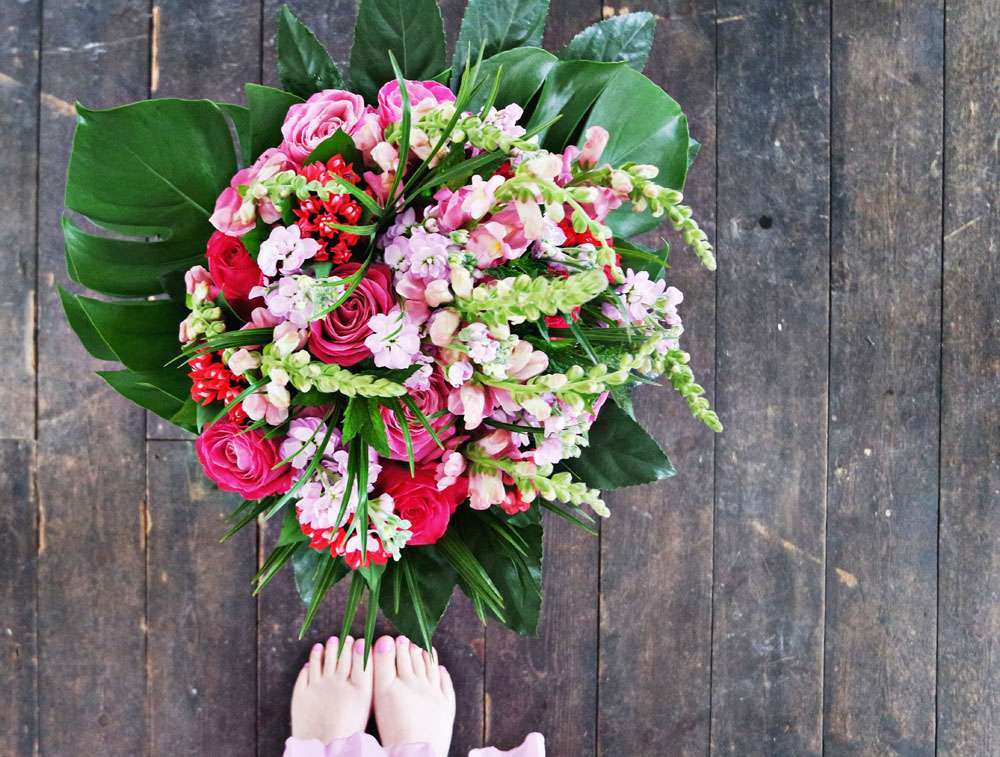 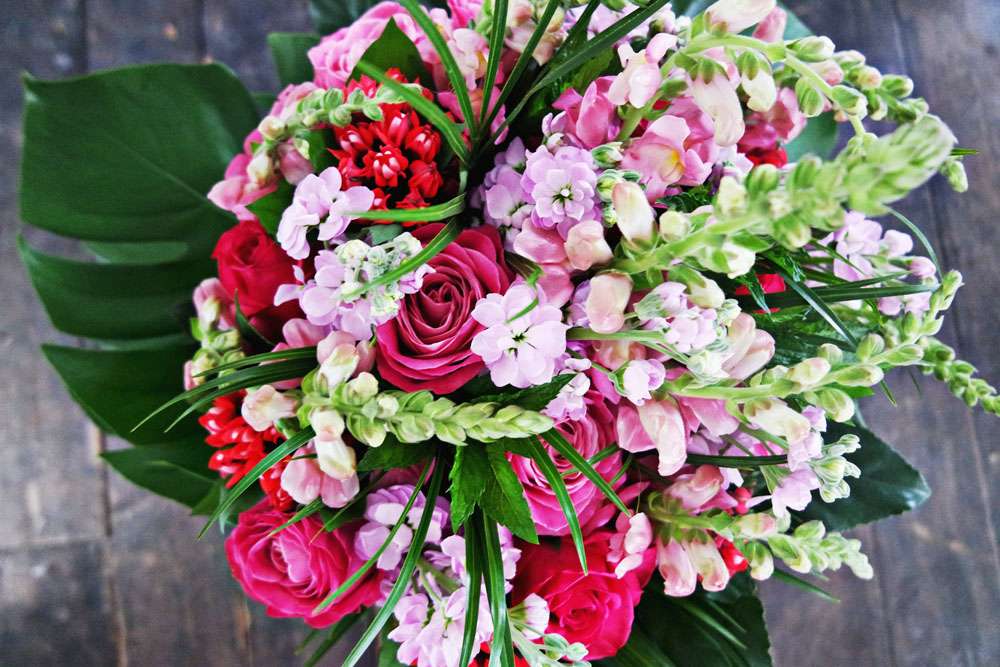 The unicorn addition came when Skye from Whimsical Cake Company contacted me and asked if I’d like some treats for the party. Of course I couldn’t possibly say no! She sent us unicorn cake pops, biscuits and pink marshmallows with adorable faces on them. My mum surprised us on the day by bringing along these perfectly matched homemade mini cupcakes (if anyone’s interested the edible rainbow and unicorn cupcake toppers on the cupcakes came from Lakeland!) 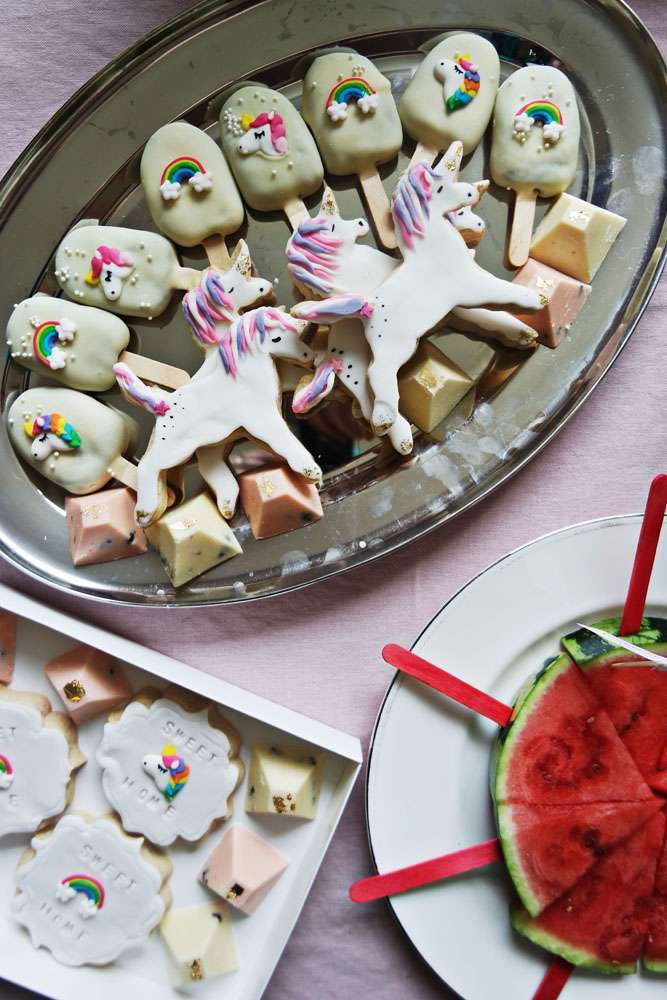 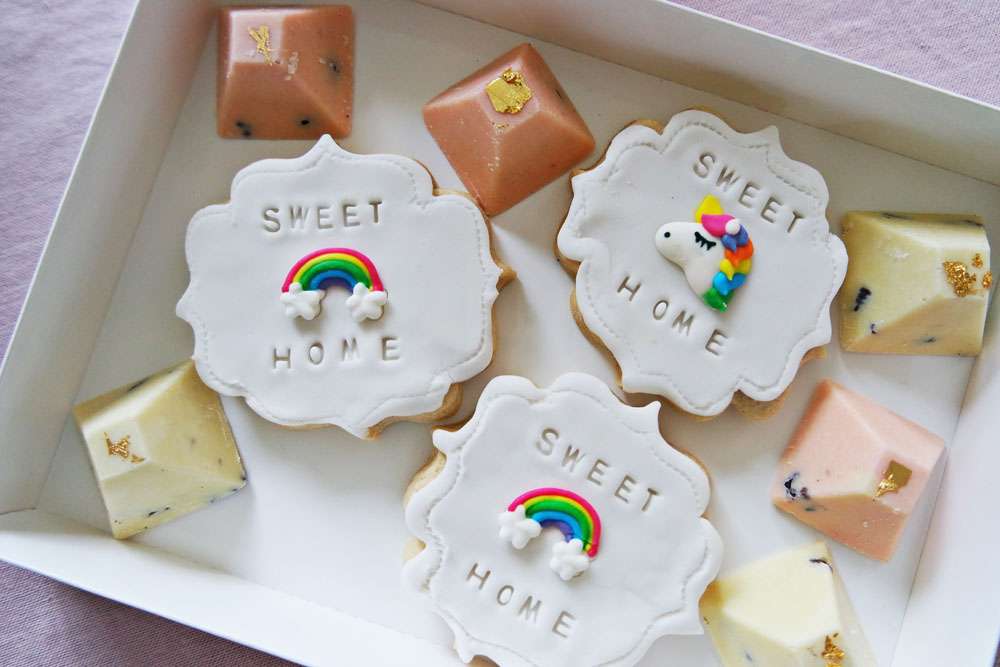 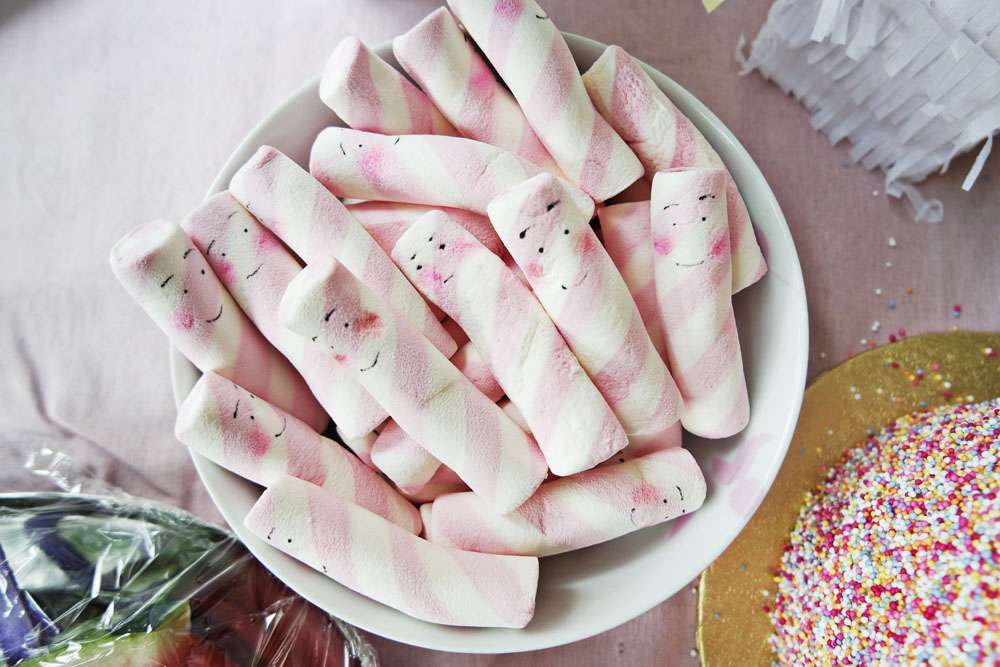 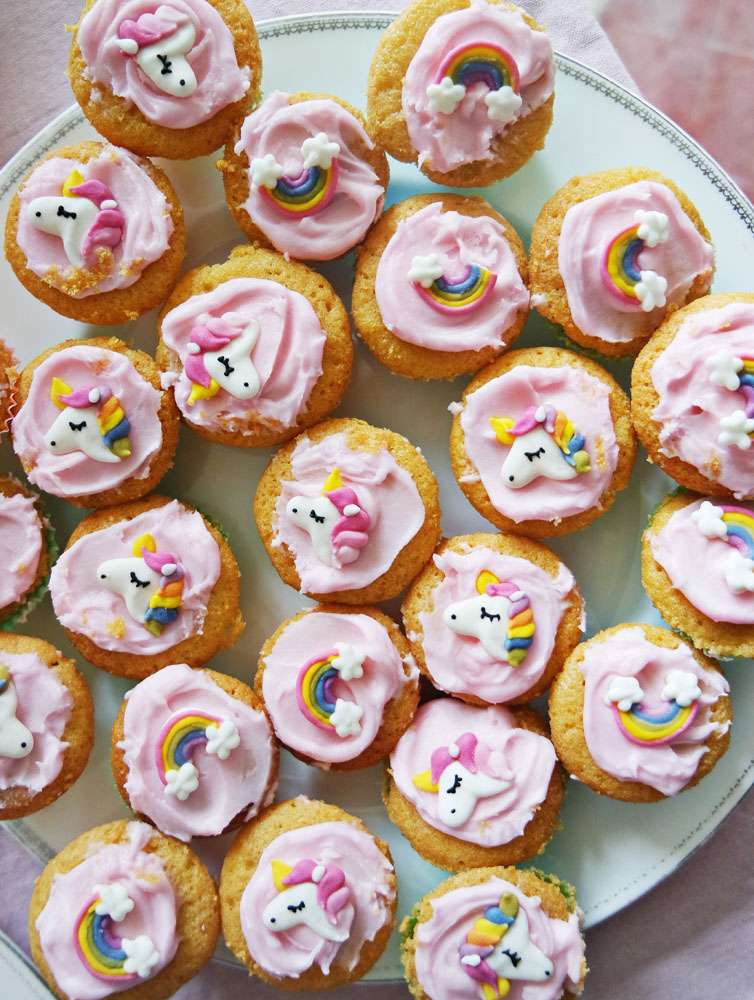 Originally I was going to order in loads of pre-prepared food, but when I priced it up it was going to cost a fortune. In the end Sophie and I made everything ourselves (I know right? So proud!) but when I saw that M&S were selling this cake I HAD to order one. It was so delicious and only £25! Hello perfect wedding cake idea. The website says it serves 12 but it fed 20 easily as we had some left over. 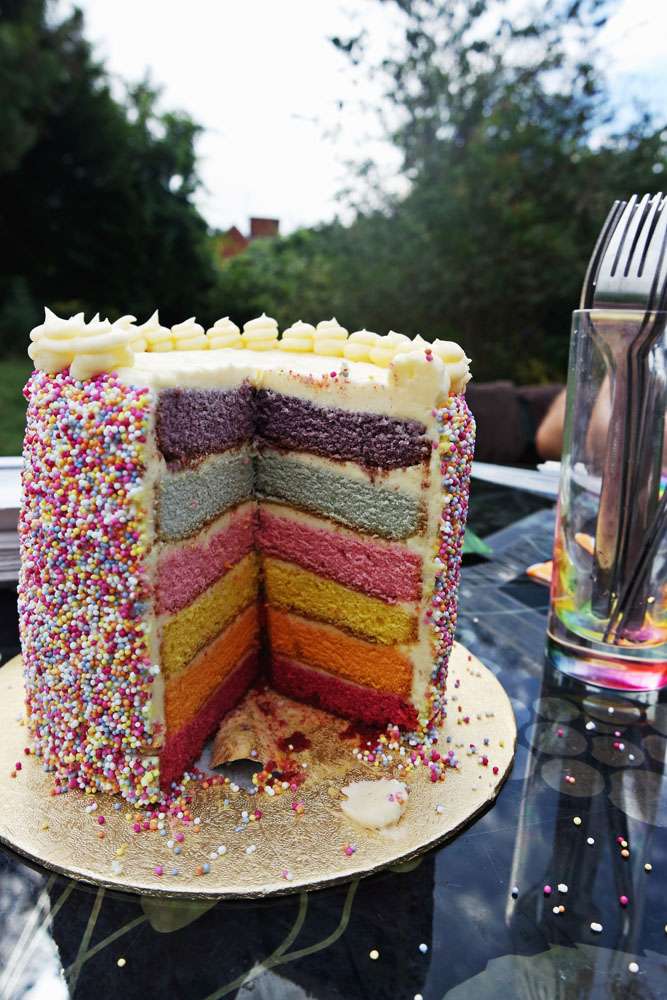 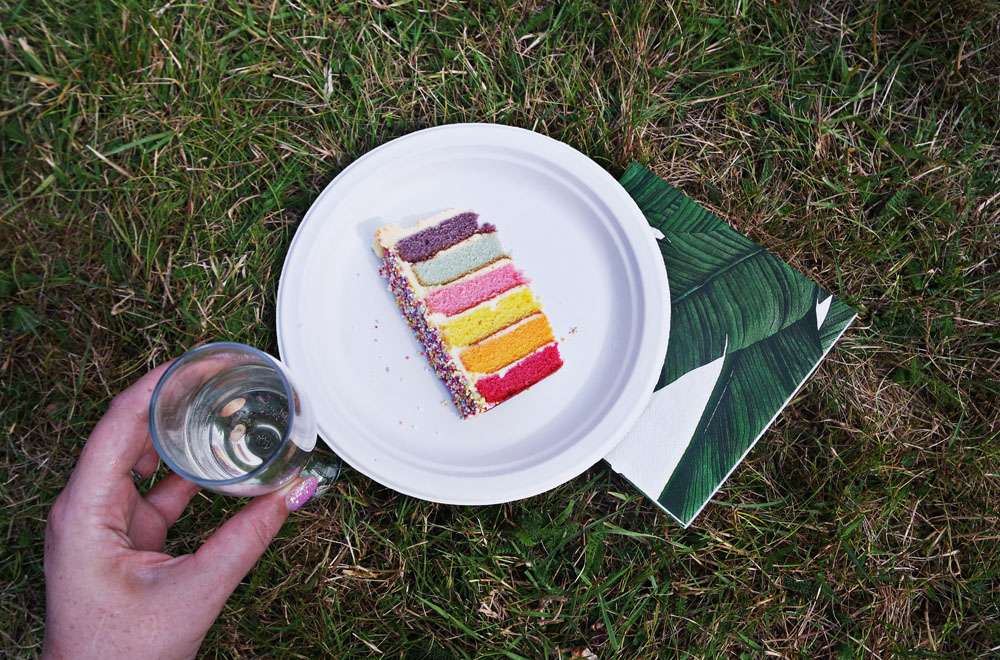 Everyone seemed to have a really great time which made me very happy. Who knows, now we have a big house maybe I’ll become quite the hostess. I’ve already offered to do Christmas eve this year (not Christmas day, that’s too high profile).

However the success can probably mostly be chalked up to enormous amount of booze I bought! Apparently £300 on wine/prosecco and £150 on beer/cider is a bit too much for 20 people… Who knew!? There were quite a few sore heads the next day! Not least of all because my genius idea of turning our fridge into a wine dispenser! Oh yes, it certainly was the hit of the party… Especially with my dad. I definitely get my love of wine from him haha!

Who needs a water dispenser anyway??❤?

So as I said, I didn’t really take enough photos, but I wanted to share a little bit about our house warming party with you today anyway. Note to self – must think like a lifestyle blogger a bit more next time. Photograph ALL THE THINGS. 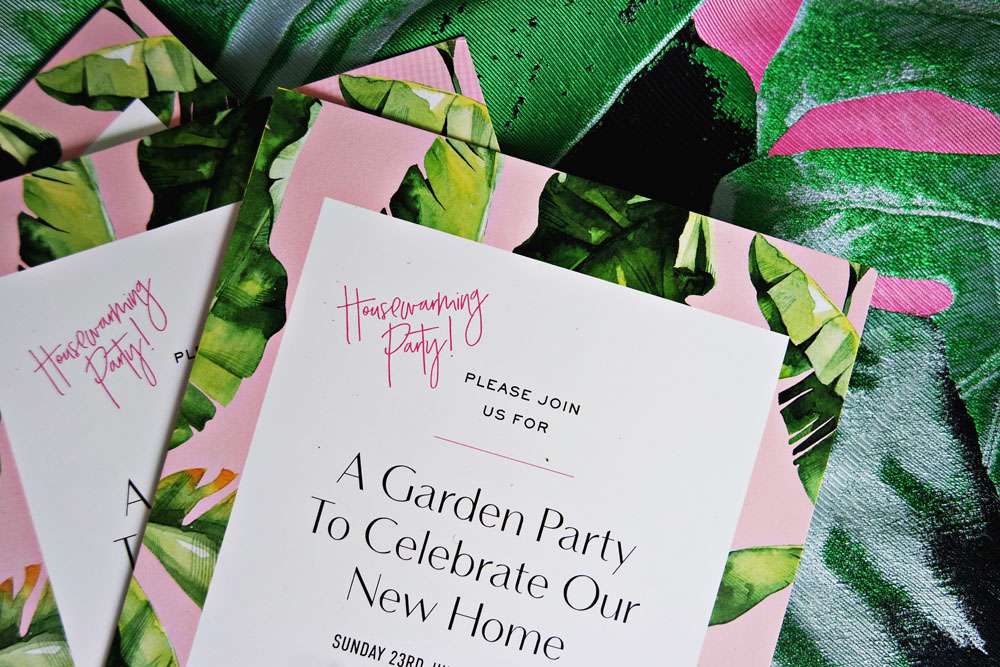 I’d love know what you’d like me to share about the house next. Maybe a little bedroom or office tour (since I’ve freshened both those rooms up with a lick of white paint and we’ve moved all our stuff in?) Or maybe you’d like to see more of the garden? How about a more general post about the renovation plans?

Let me know in the comments!

You're doing the kitchen... in four weeks!?!?" That was pretty much the standard response we got when telling people about our insane plan to gut and basically rebuild our entire kitchen in a month. So why the ridiculous time frame? Well, we were invited to take part in Revamp, Restyle, Reveal - a challenge with ten bloggers, nine sponsors, one room (of our choice) and four weeks to make it over... And well, apparently my husband and I are suckers for punishment.

OMEDELBAR from IKEA: Gothic Meets Hollywood Glamour for your Home!

There are two great life lessons I've learnt since embarking on our renovation project: Everything will take 1716 times longer than you hoped it would, and IKEA is basically brilliant. OK so I knew the latter already, but when you have people coming around for your first attempt at hosting Christmas Eve and you realise that morning that you haven't got enough chairs for everyone... Well let's just say I thank those Swedish home gods everyday that they decided to open a branch in Reading.

One of the most stressful, yet satisfying, house projects we've done so far is our kitchen which we did last summer in just a month (!) as part of an interior's challenge called Revamp, Restyle, Reveal. For those of you who missed it, here's the drill: A group of sucker-for-punishment bloggers + a selection of generous sponsors + a room of our choice + four weeks to make it over = a fuck load of unexpected stress, a ferociously active group chat and a whole heap of fun!

Gosh, thank you so much for all your lovely comments after my I Need to be Honest with You blog post a few weeks ago. I was so touched by how many of you reached out with love, support and compliments for the blog, it made my heart so happy! It's really difficult when you work for yourself and don't get much feedback. Sometimes it can feel like you're just spinning on an endless hamster wheel with no end in sight, not even knowing if anyone bloody cares. It was so amazing to hear back from you all.

Thank you for all your enthusiasm about this new series! My Instagram especially has BLOWN up ever since I started posting about the house and I don’t think I’ve ever had as many messages as I did when I asked if I should start blogging about the renovation.

Rock n Renovation: How to Buy a Project House

I've had so many messages since I started this series from people who are either buying their first house, or buying a renovation project, and are wondering if I have any advice. If you read my first post in this series you will already know that we had a DOOZY of a time trying to secure this place (I'll tell you all about it over something alcoholic one day) so actually, I do have quite a few words of wisdom/ warning (delete as appropriate) for you!

Wow that's a lot of words beginning with R right there. I am so very VERY excited about this project though so all that alliteration is worth it to share the news! Revamp, Restyle, Reveal is an interiors challenge which I was asked to take part in by interior designer Lisa Dawson (I mentioned her in my favourite interiors Instagram accounts a few months ago, isn't it funny how these things always come full circle!?) and blogger extraordinaire Bianca Hall of French for Pineapple. The concept is simple: 10 bloggers, 9 brands, 1 room, 4 weeks. It's kind of like Changing Rooms meets 60 Minute Makeover but without Lawrence Llewelyn-Bowen, Linda Barker or Peter Andre (didn't he present 60 Minute Makeover for a hot minute? It's probably quite shameful that I know that).

I Bought A Custom Neon Sign For My Office!