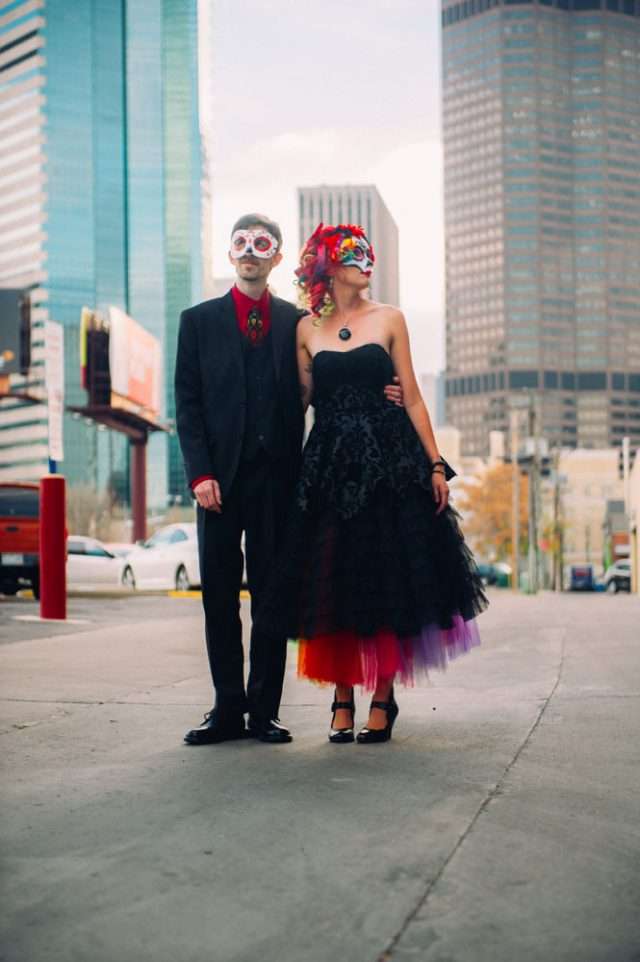 There are so many things to be obsessed with in Britani and Matt’s wedding. The bride’s black dress/ rainbow petticoat combo, the Dia de los Muertos masks, the mixed gender bridal parties, the colourful wedding cake and flowers and ALL THAT AMAZING DECOR. It’s enough to make even the most hardened of us well up and get really over excited all at the same time. 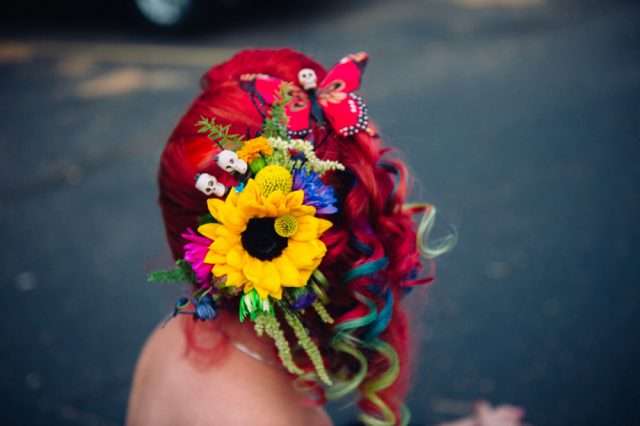 The Denver natives wanted a wedding that was colourful, fun and a little bit dark. “Our theme was ‘Rainbow Vintage Macabre Fiesta'”, explained the bride. “My dress started it all but also we both both really like macabre things, Halloween and skulls but I also absolutely adore vibrant colours”

The bride’s incredible dress came from Hell Bunny and she made the rainbow petticoat herself. “I went to the craft store bought tulle in 10 colours and my Grandma and I made it”, she said. “Our masks came from Disguises Costumes.” 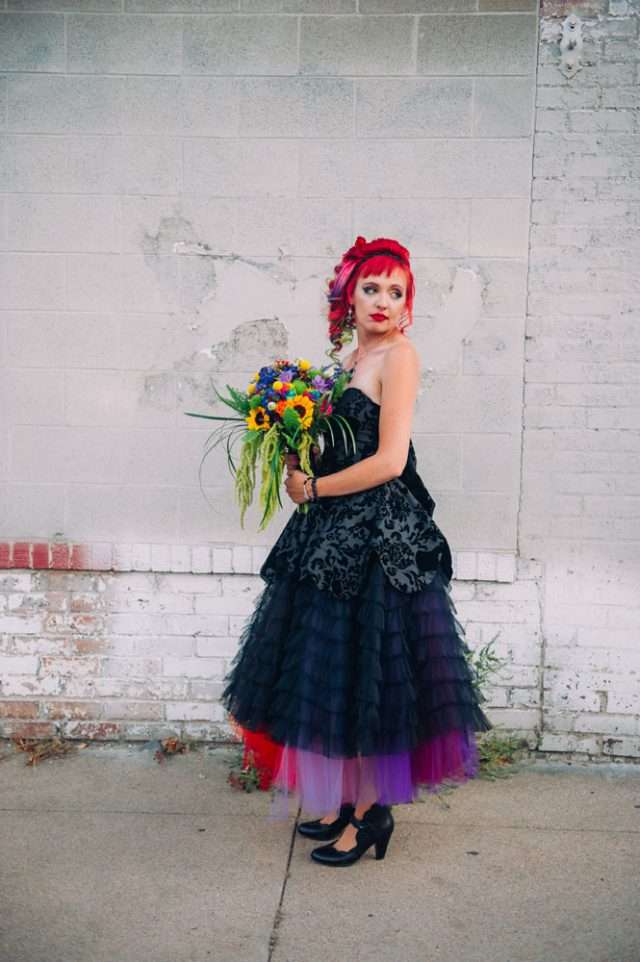 They not only planned the entire event themselves, but they decorated the reception space too. “We had lots of skulls, table runners made out of a large blankets, giant Loteria cards, multi-coloured votive candles and lantern. The fabric for arch was from Joanne’s Fabrics and our toasting glasses were skull shaped and were from eBay. The papel picado tissue banners with our names and date from were from Vintage Baby Doll on Etsy. We had a face painter so the ‘normal people’ could feel more adapted to the theme too!” 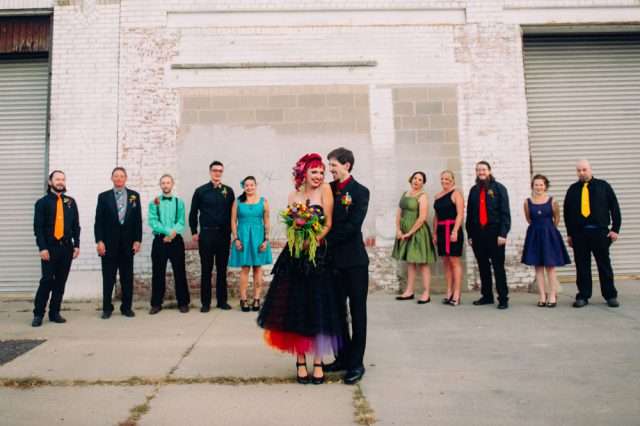 The ceremony and reception were held at the same venue, Mercury Cafe. “It is a 30 year old Denver iconic coffee shop and wine bar serving organic locally sourced seasonal menus and eclectic performers and events”, Britani explained. ” The owner was especially helpful in planning and execution of the event.” 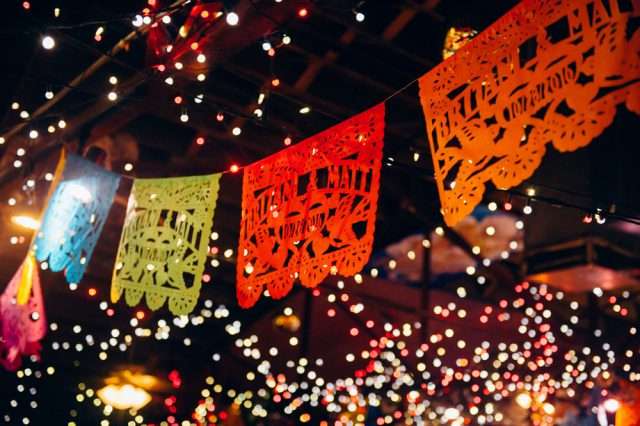 “Our ceremony was held up on the stage. Our officiant, Laura, took traditions from Wiccan, Native American, Celtic and Christian practices and ceremonies and melded them into a harmonious and beautiful hand-binding and ring exchange with a loving remembrance candle, lighting and a speech.” 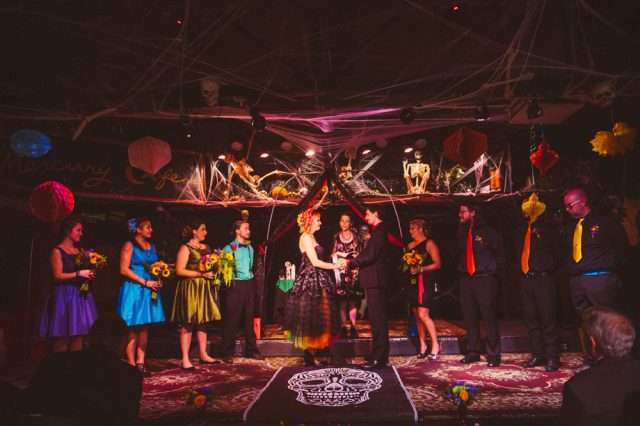 One of the most memorable things that happened was their real life wedding crasher! “We had one wedding crasher who thought it was a costume party and showed up dressed like a priest, which made my actual officiant very uncomfortable!” she laughed, “But all night everyone just referred to him as the weird guy, it was pretty funny.” 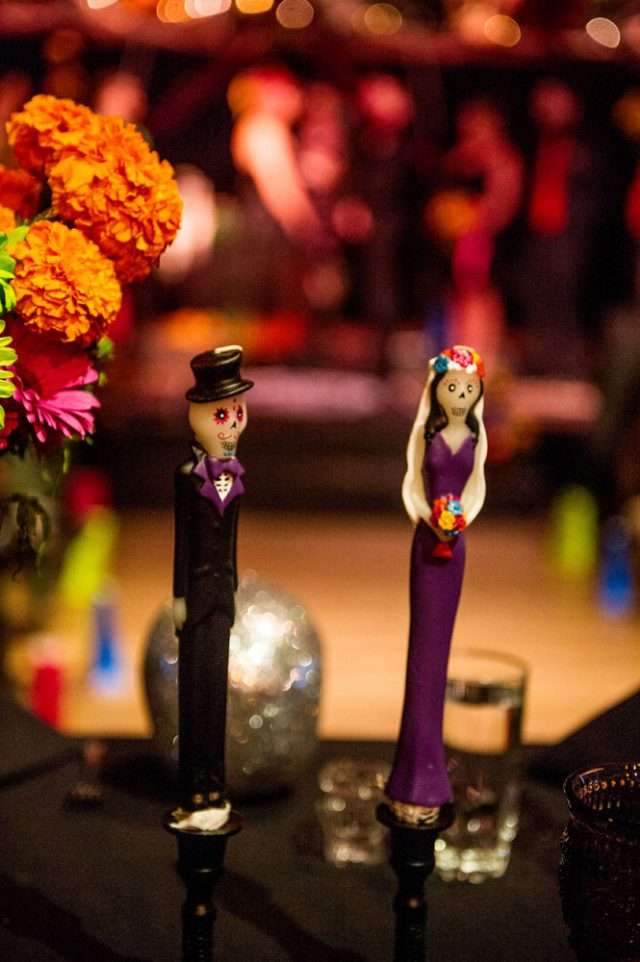 “The best thing about the wedding was the response we received from our guests afterwards though. It was overwhelming, everyone said they had so much fun and had never been to such a unique wedding. PLUS being able to see all of our friends and family in one place was absolutely AMAZING!” 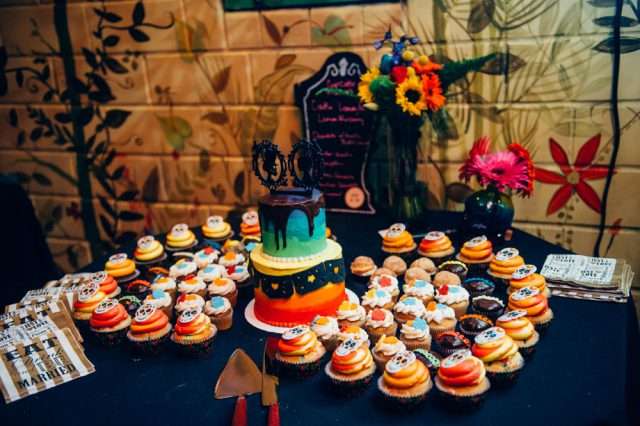 “I also loved seeing it all come to fruition. You can imagine all you want, but until you see it in real life all together you can only guess how it will look. I have been dreaming of a party like this since I was 16. It was our chance to have it all. It was every party I have ever missed or wanted to go to all rolled into one. Because hey, when else are you going to get another chance to throw a $6000 party with everyone you love?” 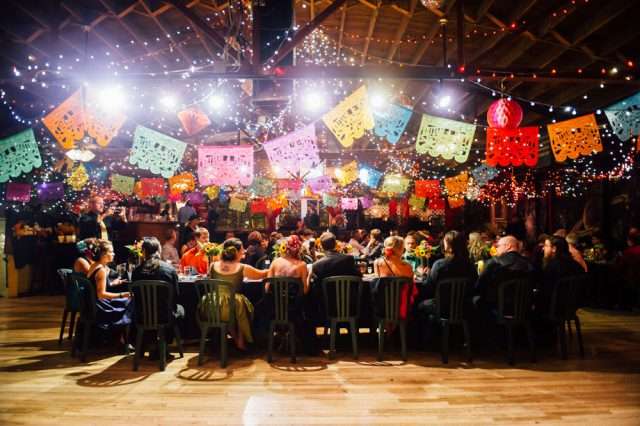 “I enjoyed every bit of planning our wedding”, she concluded. “I took a lot of inspiration from Rock n Roll Bride. This was truly my piece of art and I am proud to have an opportunity to show others how cool and fun a wedding can be. It is a truly joyous occasion like no other; the euphoric high of it all was breathtaking. Thank you for your blog, it inspires dreamers.” 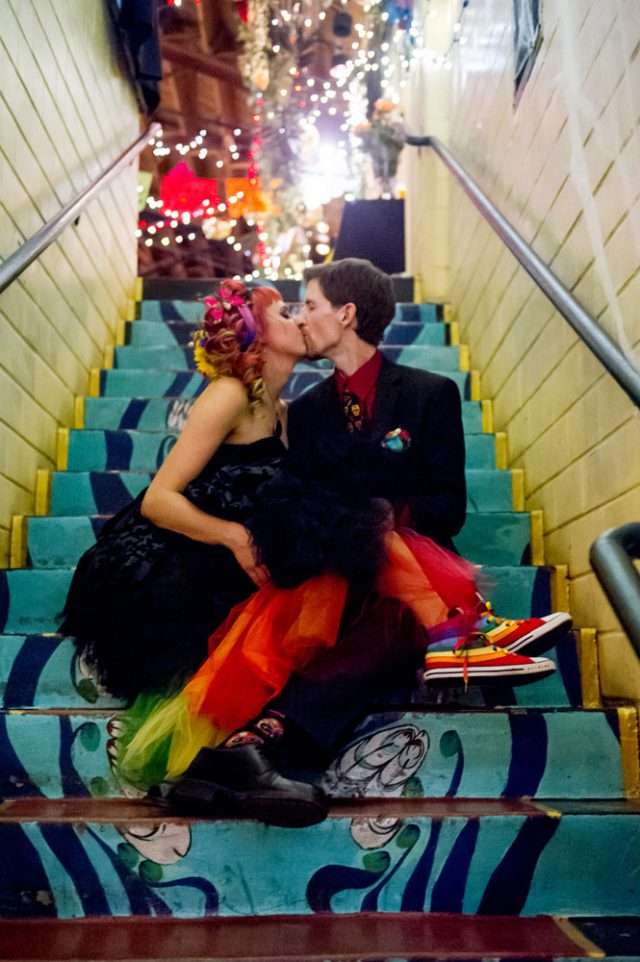 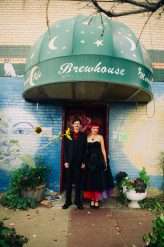 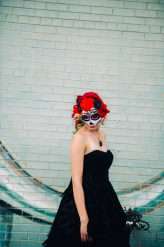 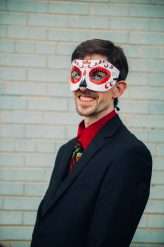 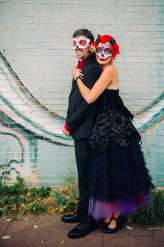 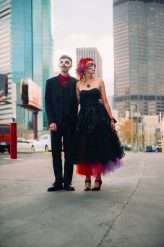 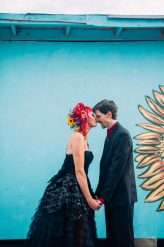 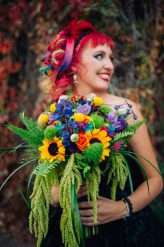 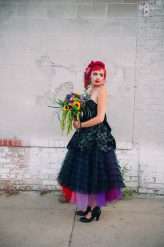 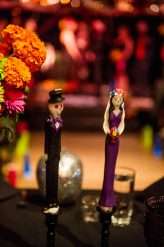 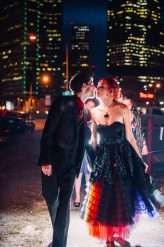 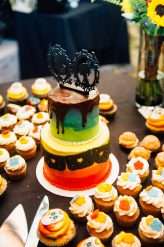 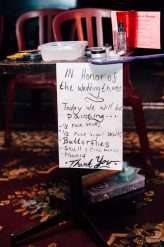 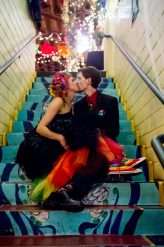 Eclectic Wedding With a Hint of Disney & the Bride in Black: Trent & Whittney

Trent and Whittney had an eclectic and elegant wedding, inspired by the bride's obsession with Walt Disney. The bride wore a stunning black gown and her bridesmaids were all in different coloured dresses. Trent and his attendants all wore smart grey. This juxtaposition made for some stunning photographs! They were married at Lemp Grand Hall in St. Louis, Missouri.

I've seen a lot of Day of the Dead themed weddings in my time, but hand on my heart, none have been as incredible as this one! From the bride's black dress with hidden rainbow petticoat, to the extravagant and gorgeous DIY decorations and the holi powder war (!), this is a wedding I KNOW you're all going to love.