You are just going to die with excitement over Lyndi and Rob’s amazing vow renewal in Iceland! Their theme was literally ‘let’s runaway to Iceland in a camper van and get re-married on an iceberg.’ And the photographs are epic!

“We love to see the world together, we love to adventure, and this was the perfect destination for our next chapter to begin”, explained Lyndi. “It was literally four people in a camper van in the winter in ICELAND! It was freezing and magical and we got to snuggle under the Northern Lights and soak in the tiny-ness of being humans in this big, beautiful world.” 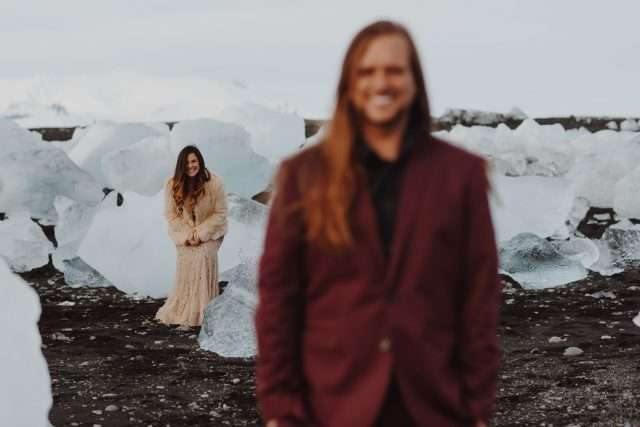 They’d had their big gorgeous wedding six years ago and now work as wedding photographers themselves. “Now that we photograph weddings together, we always talk about wanting to renew our vows and do it all alone somewhere beautiful in the world. Having just the two of us there let us TREASURE every second, and having Sean there to photograph how we are with each other in SUCH a gorgeous place was incredible. Seriously the most treasured possession is having professional, INCREDIBLE photographs of ourselves in such a perfect moment in such a perfect place.” 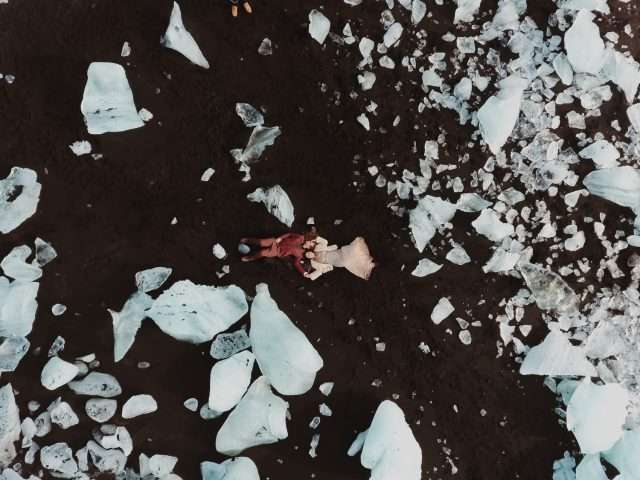 Their vow renewal ceremony was held on a glacier. “We were (almost) swept off our feet and into the ocean on a giant bowl-shaped iceberg”, she laughed. “When you’re in Iceland and there’s a glacier you can stand in and get re-married, you go for it! The black sand beaches were UNREAL, and the glaciers that wash up all over the beach like glass sculpture giants are indescribable. It was SO cold, it was SO sunny, and that golden, perfect day was spent eating oatmeal and getting ready in our camper van, running around on the beach together and getting to just make out for hours, and ending under the stars and the Northern Lights was one of the best days of our entire life. It was FUN, it was SPUR of the moment, it was magical, it was tender, it was us.” 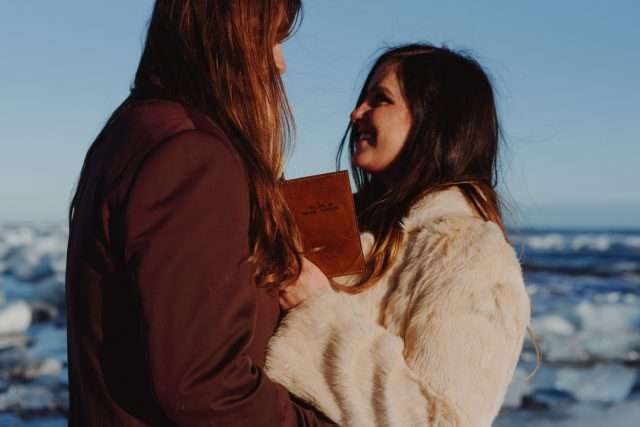 However the tide did almost ruined their renewal before it began! “We got to the beach, scouted out the location, and it was PERFECT”, Lyndi explained. “We went back, had some oatmeal and coke, and started getting ready in the camper. Right as we were about to start, Sean went back out to the beach and the tide came in! So all those magical glaciers that are huge were out in the deep, freezing water. So we sprinted down, found the most perfect one to stand in, and raced the tide until the sun went down! Because all the big ones were gone though, we decided to camp there at the ice lagoon for the night, then wake up early and do more photos together with the big ones! It was destiny. That night, the most incredible night, the Northern Lights were lighting up the starry sky with neon waves and ribbons over the ice lagoon. It was the most surreal thing. We ate our mac and cheese, played cards, and then discovered that they were starting. So (since it is cold AF there in the winter), we threw on every layer we had, grabbed the tripod and cameras, and wandered down to the lake full of glaciers to capture the lights on camera.” 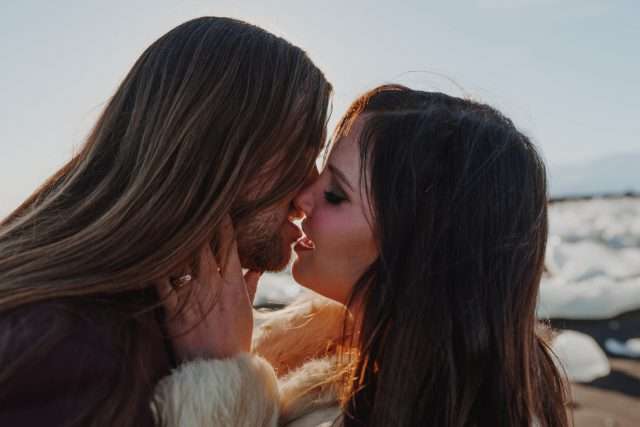 “Sean went back to warm up, and Rob and I decided to run to the top of the hill above the lake to see the view from there. It was a life changing moment. We just held each other and loved on each other and looked straight up at the biggest sky we had ever seen, all alone in the most beautiful place in the world that two people could have ever possibly been. It was pure magic, and something we will treasure for the rest of forever.”

Understandably, they couldn’t choose just one favourite part of their renewal. “Northern Lights, chasing the tide, and of course the Icelandic horses”, she said. “The next night we discovered a little hostel with a bar and the most amazing pizza. There were guitars and pianos and pizza and the most incredible mix of travellers from all over the world, and it was definitely the most warm, cosy, perfect part of the trip. Also they had showers and an incredible ‘Secret hot springs’ nearby. So we were in love.” 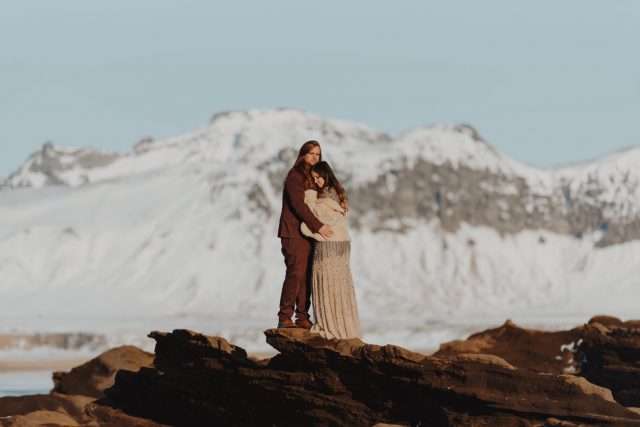 Their biggest expenses were their flights from the US, and then food! “Flights were $350 a piece and we got an amazing deal on the camper. Cola Cola is cheap there but a cheeseburger will cost you $35 without blinking an eye! But every expense we did have was SO worth it. Especially the photographer. And the pizza.”

“The best thing about planning our vow renewal was picking anywhere in the world we could go and getting to do it with my favourite human. Every second with him is the best second yet. However the worst bit was doing it in the winter! In retrospect we would have done it in summer! We are SO glad we get to say ‘we road tripped Iceland in a camper for 10 days’, but May through October would have been a warmer choice.” 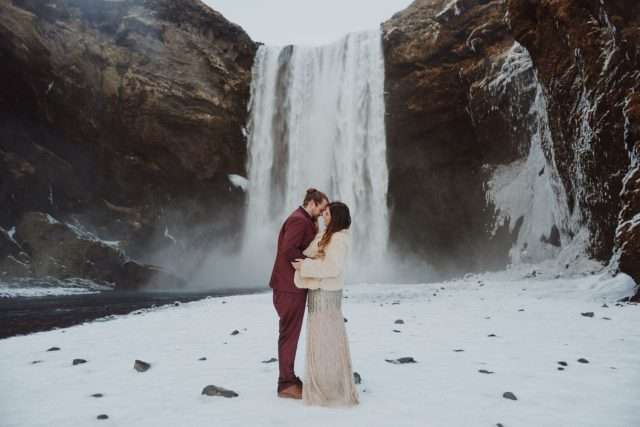 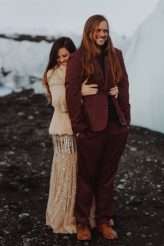 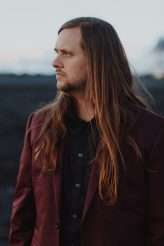 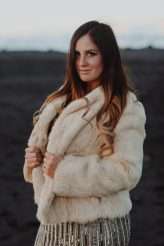 When wedding photographer Trish Barker emailed me back in October telling me she'd just shot Gene Simmons' vow renewal and asked if would I like to feature it, well, I just about died. To say this is the ultimate Rock n Roll wedding is a massive understatement. I am ridiculously honoured to be sharing this bad ass and beautiful ceremony on Rock n Roll Bride today!

Not Another Wedding: A No Fucks Given Las Vegas Vow Renewal

You probably know Sophia Hilton already - bad ass business babe behind the iconic Not Another Salon on Brick Lane. She even has her own series on BBC Three (I've definitely not cried watching those makeovers... Oh no ma'am). Married to Jorel for five years, the pair decided it was time to celebrate so zipped over to Sin City for a vow renewal to end all vow renewals.

I think a lot of you will know Sassy already. She is an amazing wedding photographer and I'm really lucky because I get to share her incredible weddings all the time. A few years ago she also wrote an article for me about her own wedding photography experience which went kinda viral (read: it was one of my most popular articles of all time!) So, when she told me that she and her gorgeous husband, Ian, were renewing their vows in Thailand I was really, really excited. Excited for them because they'd finally have the epic photographs they deserved, but extra excited for me and you because I knew she'd let me blog it!

Renew, Get Boozed and Tattooed!

Tawnee and Luis, high school sweethearts, were married after thirteen years together. Five years later they decided to renew their vows in - where else? - Las Vegas!