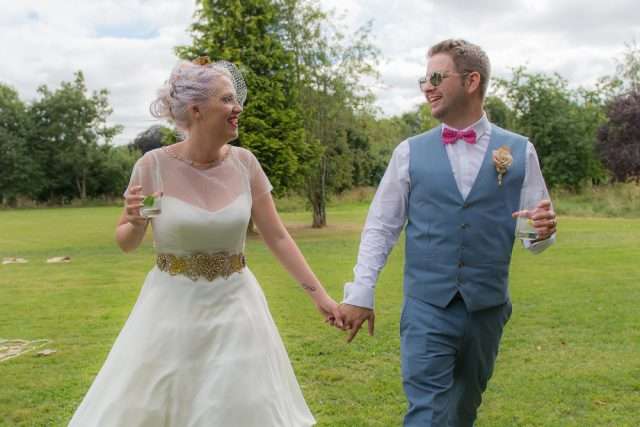 The inspiration for Mary and Alex’s colourful wedding was family. Having two kids, it was important to them that they were involved and enjoyed the day too.

“From the start we wanted a party where we happened to get married”, explained Mary. “We have two children now and we wanted them to be the main focus, as family is so important to us. I love colour and glitter and I wanted this to be all over the venue. I was often asked what my colour theme was and my response was ‘all of them!’ We also described it as ‘when a unicorn pukes glitter’ which I think we pulled off but in a quite a subtle way.” 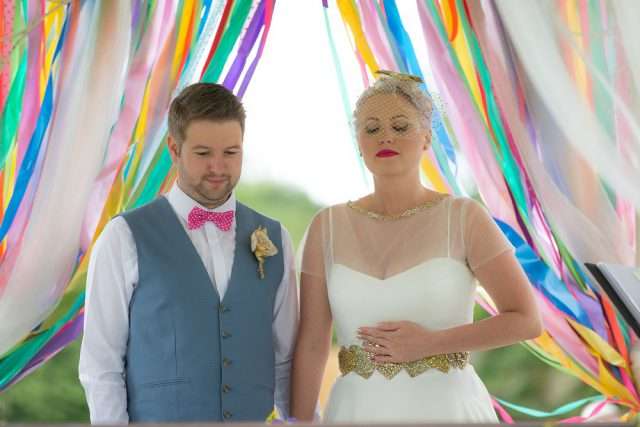 “Lots of people avoid kids at weddings but ours was completely the opposite for us with nearly 20 invited to the day and well over 30 in the evening. This made the focus about them and having fun, something we hope our children will hold fond memories of for life.”

The bride wore a short, retro inspired dress but she customised it with a pink and teal petticoat, a Rock n Roll Bride x Crown and Glory Liberace belt and even gold glitter trim around the neckline! She teamed it with gold Irregular Choice shoes and a rainbow gem birdcage veil. 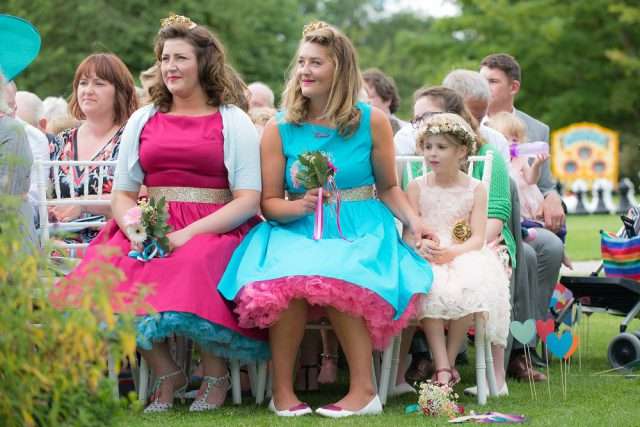 “After trying on all sorts of styles I finally chose a strapless bridesmaid dress from a local bridal store”, she explained. “I wanted to have something short to show off my amazing shoes (yes I got them first!) that had a full skirt and I couldn’t find one within budget in the local area. With the help of the shops seamstress we added a full petticoat from Hell Bunny, spaghetti straps and a bespoke jacket made from tulle, with added gold trim and cute blue and pink heart buttons. It really felt like a bespoke piece once it was finished and came in just over £500. I have purchased headpieces from Crown and Glory many times before and had my heart set on the Liberace belt to top my dress which I had custom made with a gold ribbon to match the rest of the dress.”

The reception space was super colourful, and the white backdrop of the venue really made the colours pop. “Three Birds Events took care of decorating the venue for us. They made individual glitter hearts to line the aisle, a rainbow ribbon curtain for the bandstand and added lots of glitter and colour, as well as providing amazing props for the photo booth. We used their sequin table cloths and frames with lots of pictures of us all growing up. We also had a sweetie cart from them and named all of our tables after our kid’s favourite sweets. To top this off we added to the children’s party feel with bright coloured balloons.” 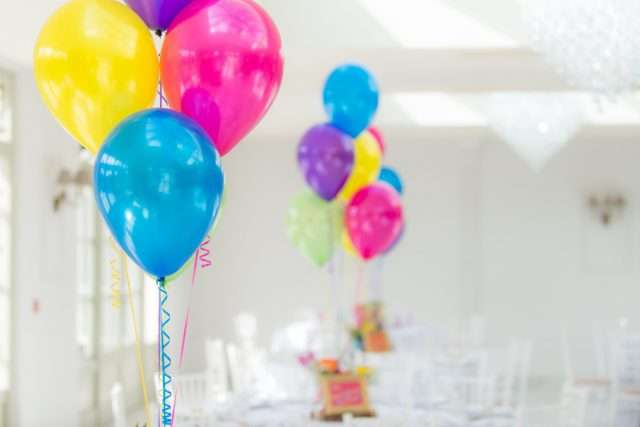 “I also got stuck in and made lots of pom poms which were scattered around the venue. I made a glitter card box and personalised drinks bottles for the children. We wanted to give favours that also paid respect to those we have lost over the years and chose lip and moustache badges from the range of favours from Cancer Research.” 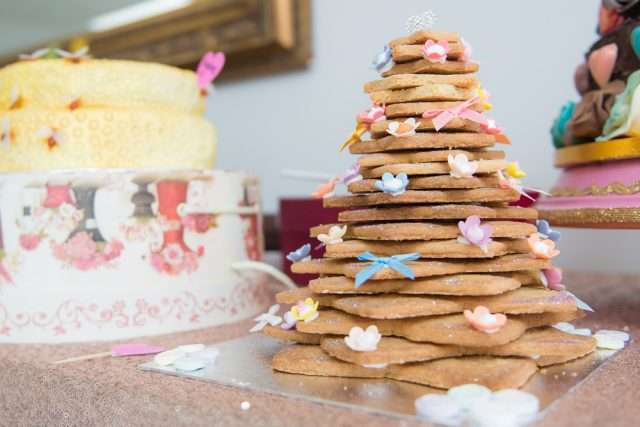 “My advice to other couples would be to read contracts carefully before you sign. It did seem at times that some vendors would say anything to get you to sign on the dotted line. Make sure everything you expect is in writing so you don’t get stung. We had lots of problems with our venue. Also join the Rock n Roll Bride Facebook group! It was invaluable for advice, ideas and unlike other groups is about making like-minded friends along the way without the bitching – I’m so grateful to have found it,” 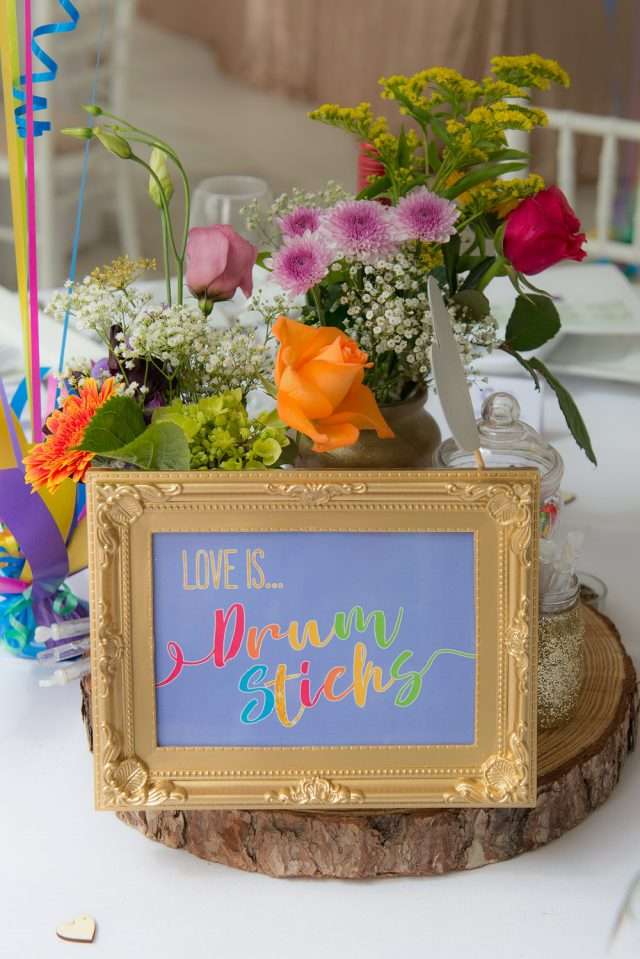 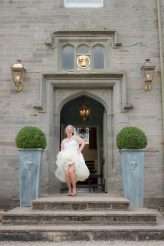 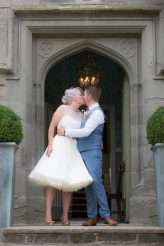 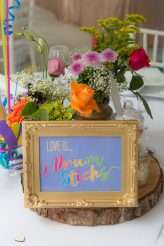 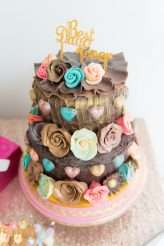 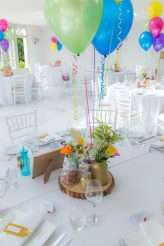 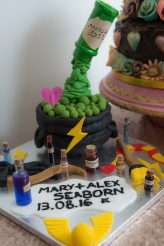 Liam and Sarah wanted a small wedding which meant they only invited their closest friends and immediate family. They had a big party at a later date for everyone else.

Handmade Wedding with Pops of Colour… and Dinosaurs

Diane and Topher wanted a wedding where they could be completely and utterly themselves. That meant being true to their own tastes and styles, but also not feeling extra pressure to have a wedding that was 'cool' just for the sake of it.