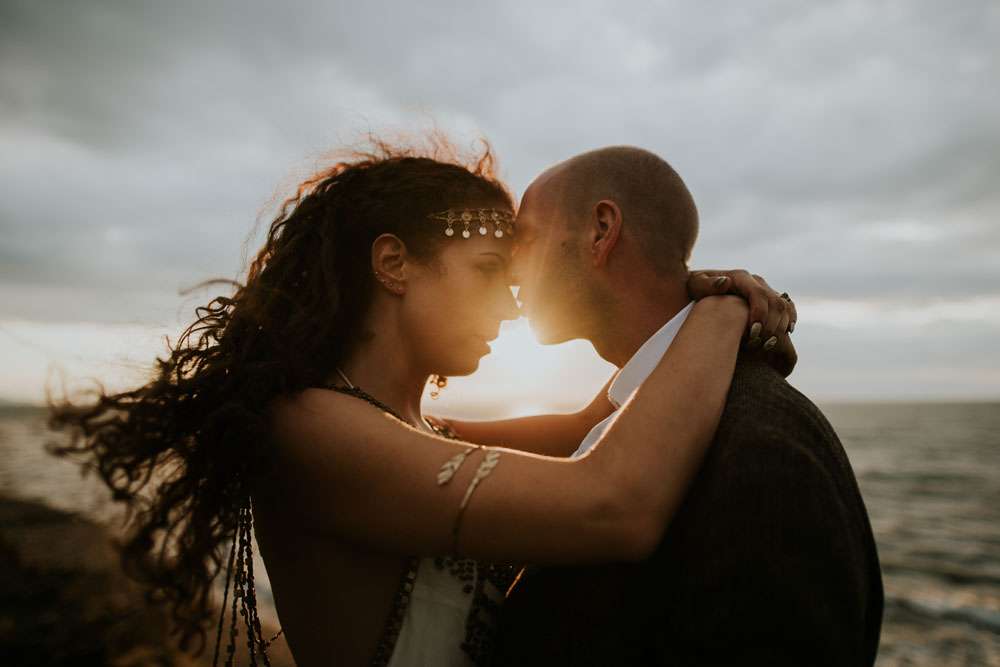 Michelle and Marc were married in June in a cave! Their wedding theme was ‘A Midsummer Nights Dream meets woodland’ focusing on nature and on having an inside outside vibe. “As a massive Shakespeare lover Shell chose the theme, A Midsummers Nights Dream, for the wedding” said Marc, “2016 is also the 400 year celebration of Shakespeare so it couldn’t have worked out better!” 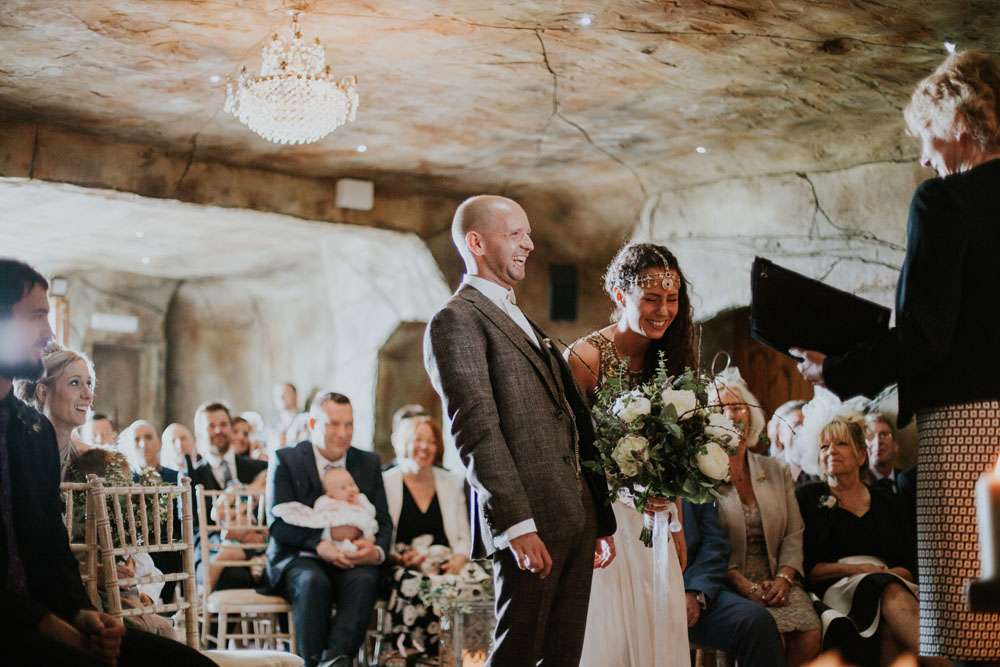 For the ceremony they decorated the cave with candles, old books and ornaments. The ceremony was followed by canapés on the lawn served with Pimms, “We borrowed lots of antique books supplied by the family and had them in piles covered with lit pillar candles which created the most incredible atmosphere” Marc continued, “we also used wild ivy and copper fairly lights everywhere so it looked like a gothic fairytale! It was simply stunning.” 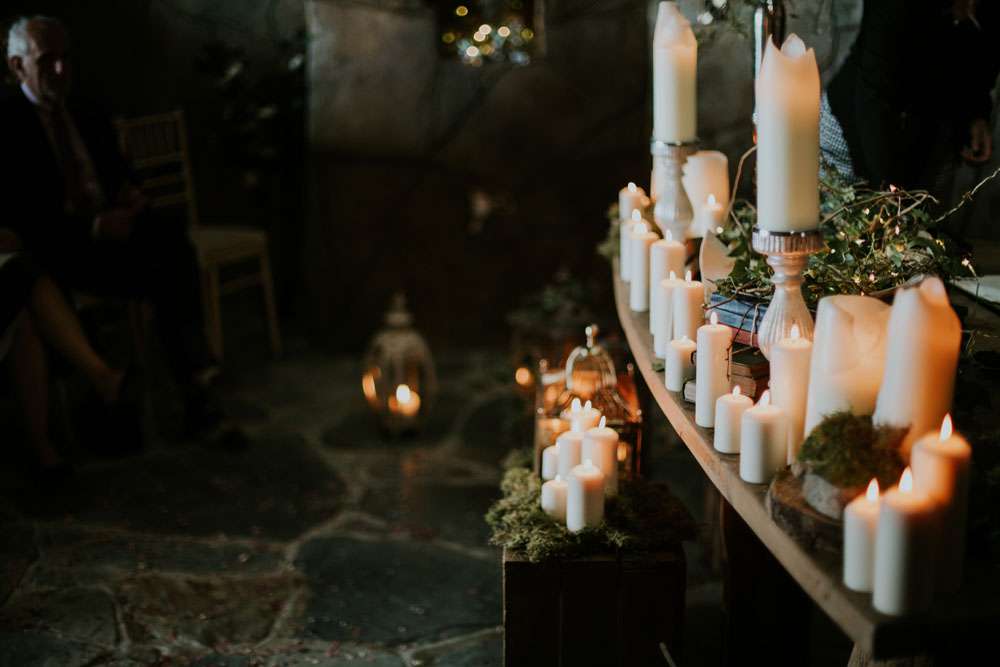 “The post ceremony nibbles was one of my favourite parts of the day. There was music playing and everyone was still buzzing from the ceremony. We also had traditional games on the lawn outside for the kids to enjoy. ”

Michelle wanted the wedding flowers to look hand picked and wild so opted for raspberries, thistles, poppy heads, peonies, eucalyptus and willow bark. “My bouquet was tied with vintage lace and filled with the most incredible foliage” she said, “it looked simply stunning – I cried when it arrived!” 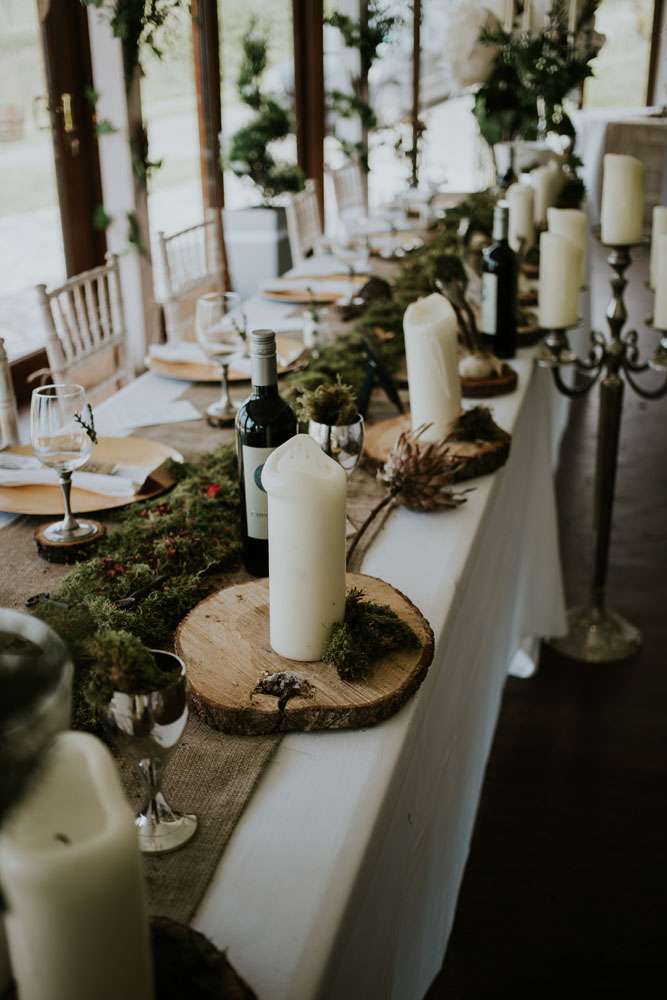 The couple decorated the reception venue with items from their own home – including crates filled with dried roses, stacks of antique books tied with twine, bird cages and wine bottles covered in dripping wax. “The space was a blank canvas so we collected wild berries, moss, copper fairly lights, deer skulls, old bottles, vintage lace and old metal keys to decorate tables.” Michelle said. “We also hung fresh foliage from the beams wrapped in lights. Each table was named after a character in A Midsummer’s Night Dream and had a quote from the play. In front of the top table we had huge silver candelabra dripping with candles, it was completely over the top and looked gorgeous.” 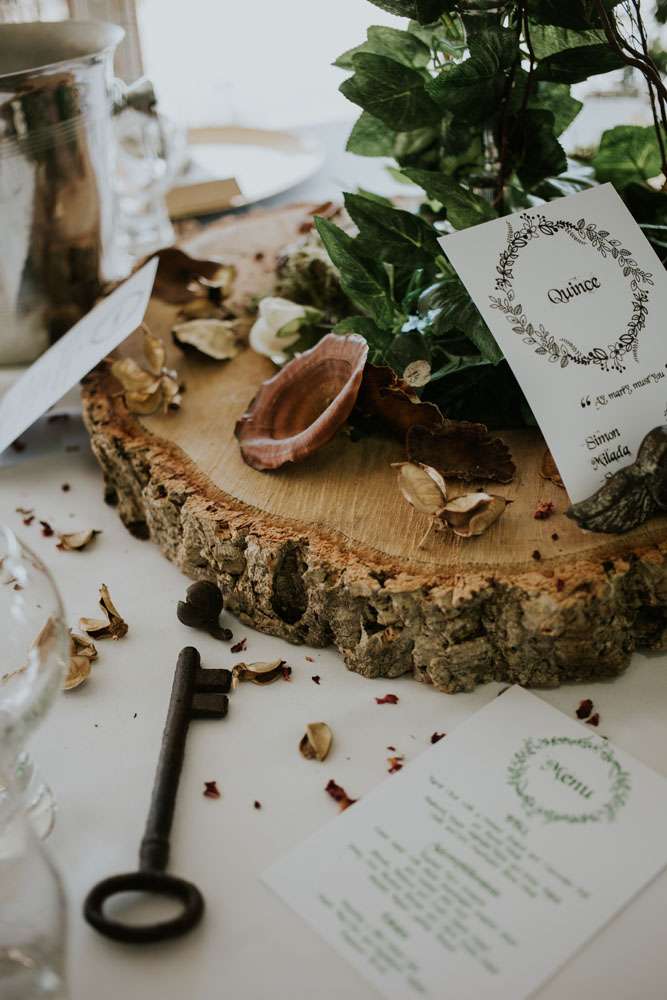 Rather than a traditional wedding breakfast the the couple had a relaxed BBQ buffet and in the evening had traditional homemade Cornish pasties. They also had not one but two (!) wedding cakes. “We won a macaroon tower from the amazing Cake Cetera in a Facebook competition!” Explained Michelle. “A friend of Marc also owns a cheesecake business called Monkley Made so they made us a three tier Cheesecake consisting of Oreo Cookie, Daim Bar and Raspberry and White Chocolate Ripple which we dressed with wild berries and foliage.” 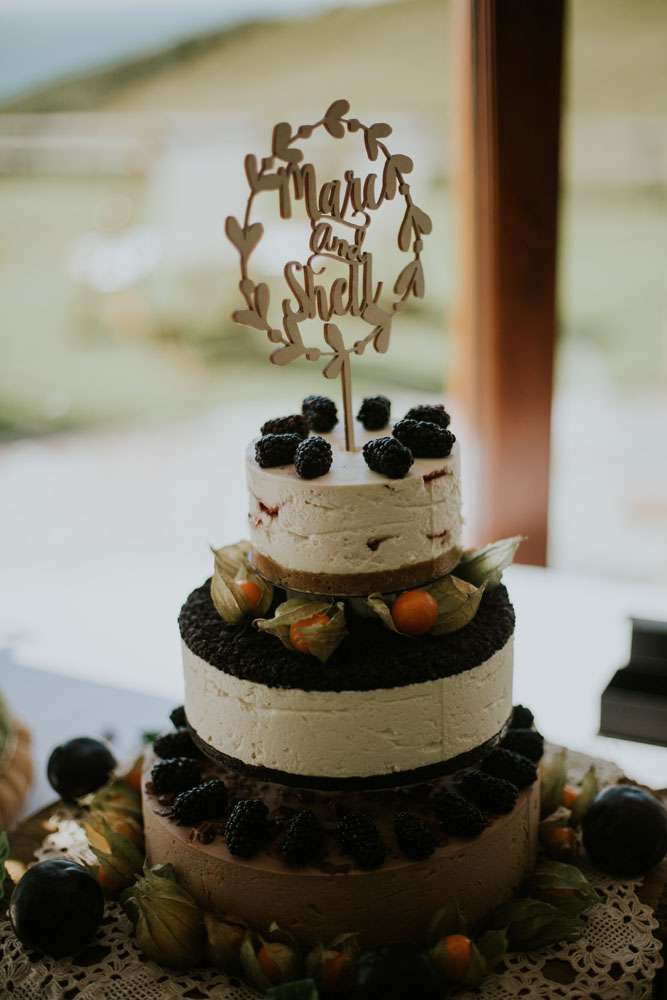 The couple’s biggest expense was Michelle’s wedding dress, but saved money by doing all the décor themselves and having friends DJ, “We had a local musician, Rob Lehane, play” said Marc, “however, we are really lucky that most of our best mates are DJs so they got involved too! Three of them, including the Best Man absolutely smashed it! For the other entertainment we had a casino. We had Roulette and Black Jack tables with Professional Croupiers. Everyone absolutely loved it and it was great to get off the dancefloor, grab a drink and start placing bets!” 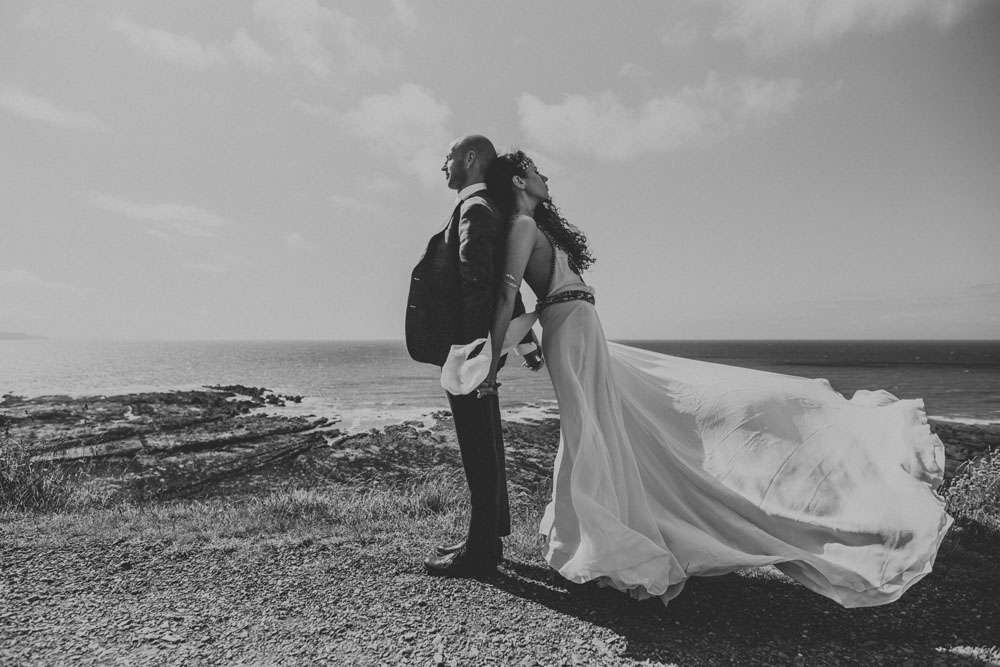 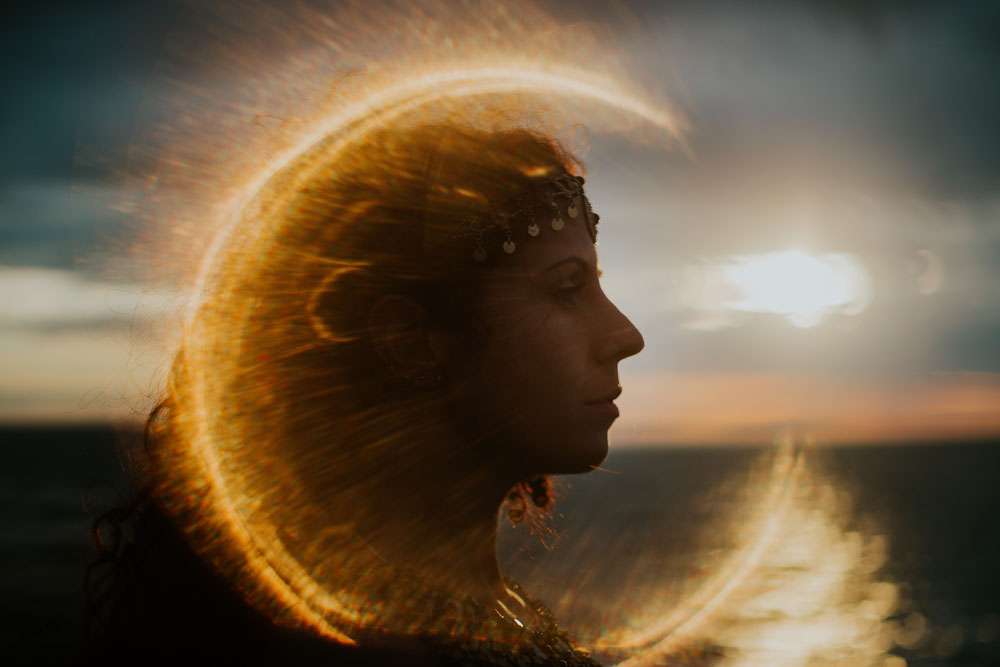 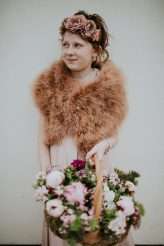 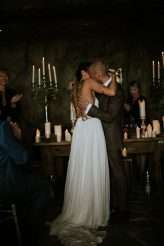 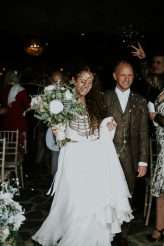 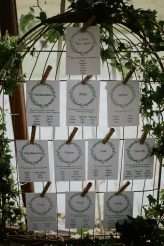 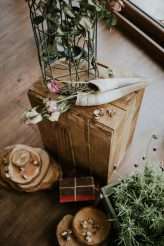 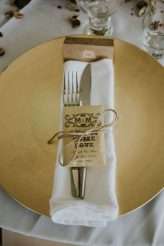 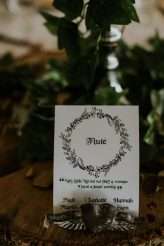 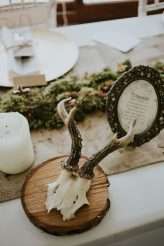 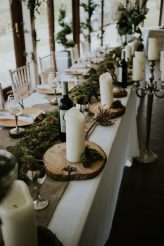 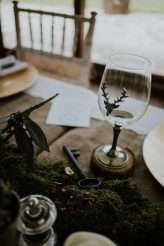 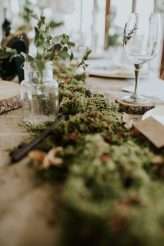 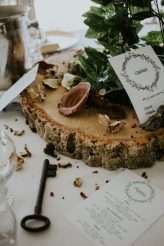 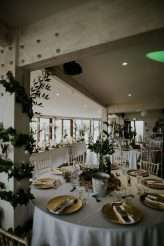 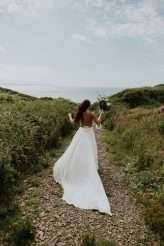 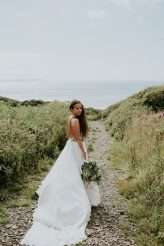 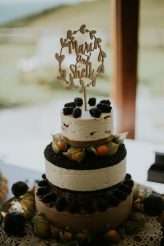 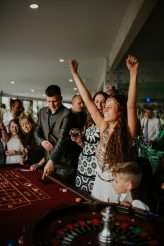 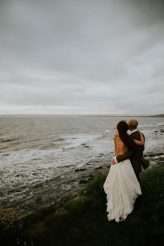 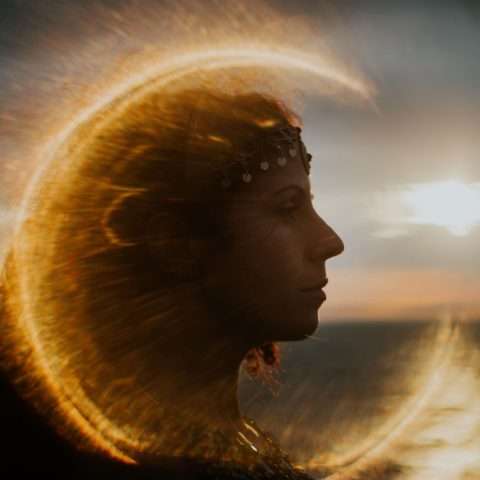 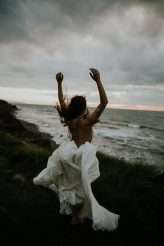 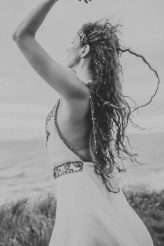 Here we go then - part two of Sarah & Doug's Cornish wedding and things are about to get colourful! On Saturday 16th June the couple hosted a humanist ceremony and reception at Rosewastis Manor in St Columb Major. They had a quirky tent marquee from Ashley Events which they decorated themselves. In fact the couple and some of their guests actually rented the manor for the whole week before to set up and just enjoy spending some time together before the wedding. For this second part of the wedding, Sarah wore a Lisa Redman wedding gown which she found at a charity bridal sale in London. Her shoes were from Irregular Choice, her headpiece was made by her and a friend from vintage pieces and her ring was her Grandmothers.

Sian and Neil's wedding featured all the things they love: Tequila, their dogs and the importance they put on their relationship. With a groom that always said he never wanted to get married, when he finally surprised his bride and asked her to be his wife, they knew the only way they were going to do it was entirely on their own terms. That meant ignoring tradition wherever possible.