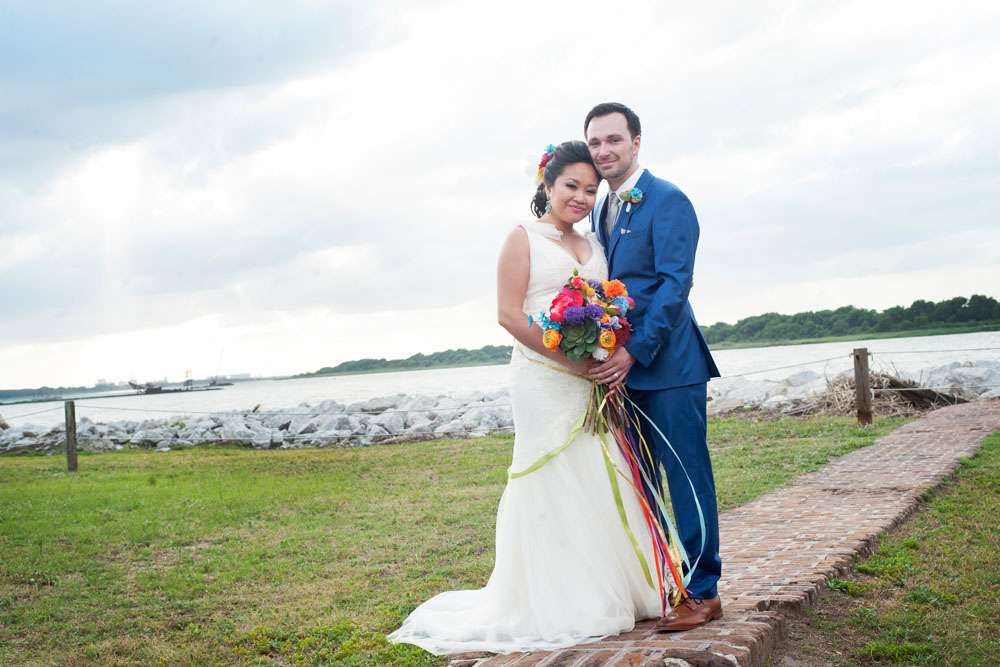 Johnny and Michelle wanted a colourful, funky and fun wedding. “We wanted the environment and décor to be a visual representation of our personalities”, said the bride. “This led us in a lot of different directions that included things like bright colours and watercolour cakes. We also had a bit of southwestern influence from the groom and bohemian style from the bride. It was great to see all these different ideas come together to form a single cohesive look for the wedding!” 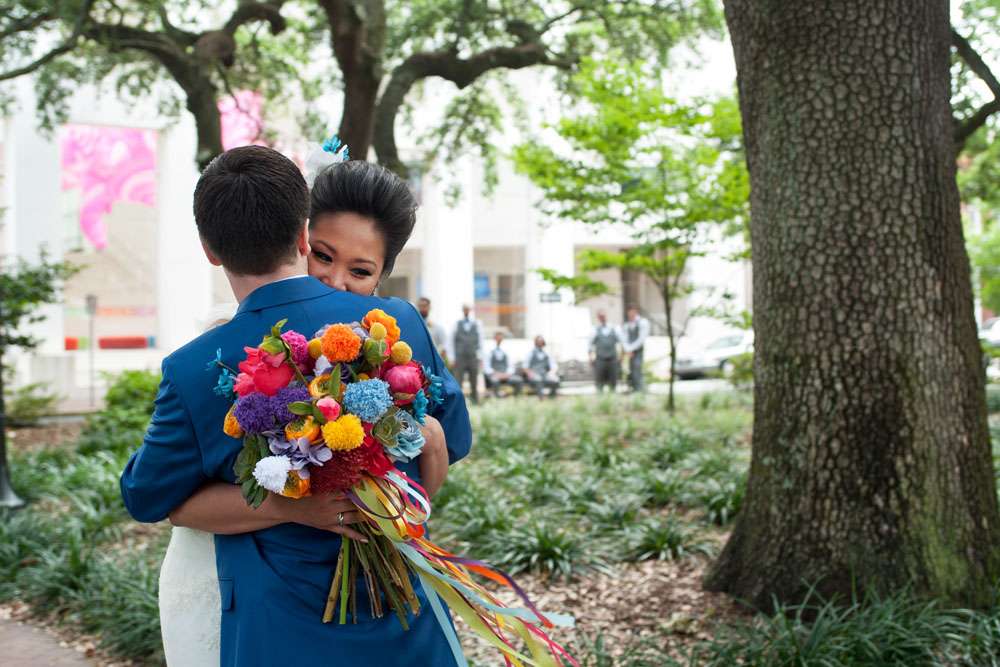 “We’re very colourful and animated people so we wanted a casual, relaxed, fun atmosphere with vibrant, whimsical touches”, she continued. “We also really wanted to throw a party for all our family and friends!” 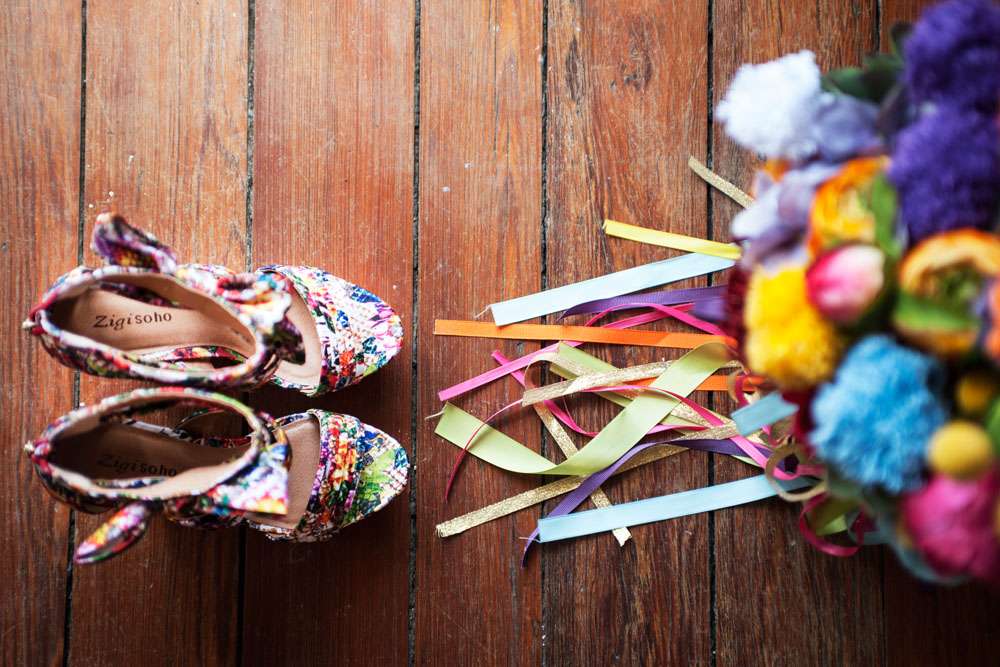 They were married at Old Fort Jackson, Savannah. “Having our wedding at a fort was definitely out of the norm, along with all the crazy colours, faux flowers, s’mores bonfire, and alcoholic popsicles! We held the ceremony by the Savannah River outside the fort. Our close friend, Jill, who has been there for us throughout our years together, officiated wonderfully.” 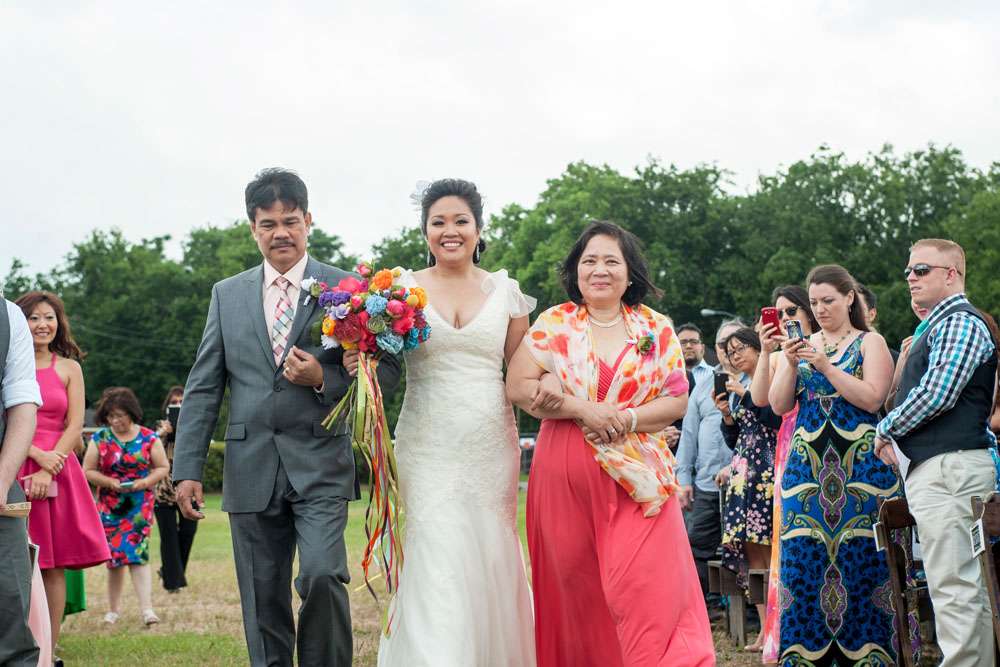 “Johnny had a few of his guys play our song as I walked down the aisle and surprised me with one of my elementary school friends accompanying on violin. It was windy and a bit overcast that day but as soon as we started our vows, the clouds opened up and the sunlight came spilling down on us. There were tears and laughter and just an overall outpouring of love and warmth from all our close friends and family.” 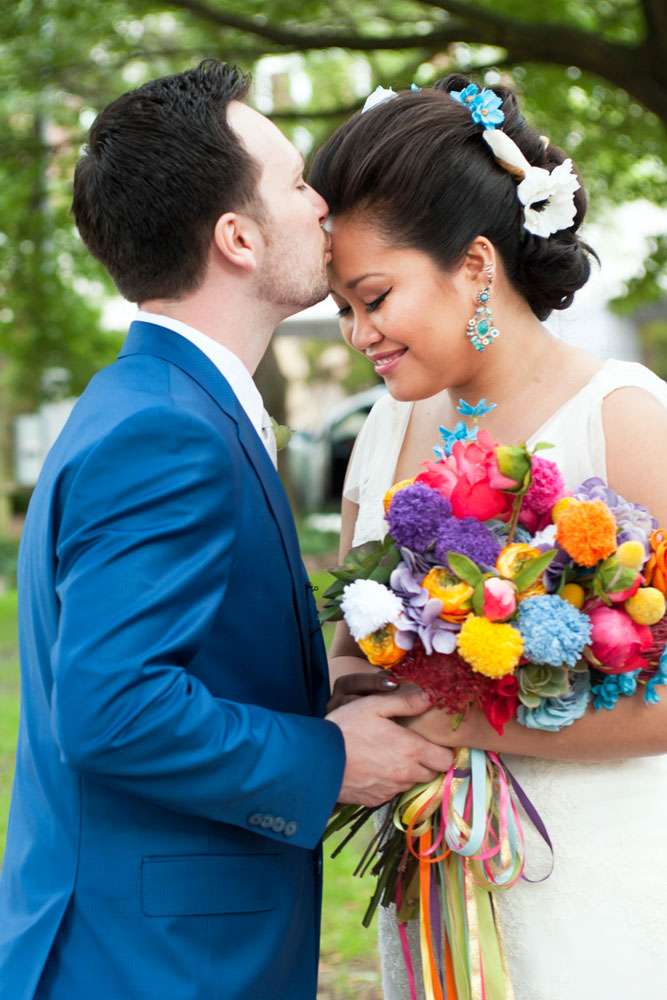 “Its so hard to choose a favourite moment but having family and friends fly in from New York, Texas, and as far as the Philippines to join us for this huge moment was amazing”, she concluded. “The amount of love and support we received was overwhelming and we are so very grateful for all the awesome people in our lives.” 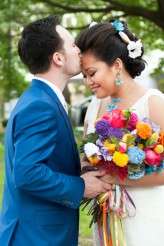 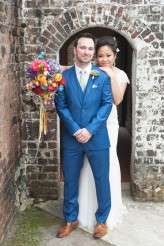 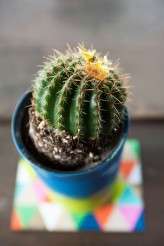 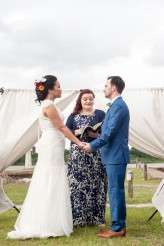 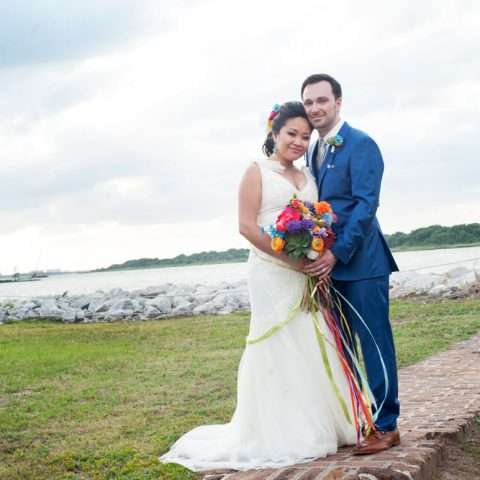 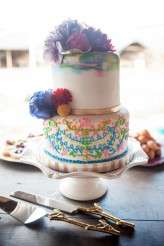 I have something really beautiful and unusual for you today, I just know you're going to love it! Kristin and Ky were hitched at Kanapaha Botanical Gardens in Florida. Their outdoor wedding was made as colourful as possible with the addition of paint... lots of paint! The bride wore a full face of geisha-style face paint, her dress was splattered with it (which she did herself), they painted each other as part of the ceremony and they had an artist on hand to do their guests too!

Oh Elena and Paul's wedding makes me so incredibly happy! Her vintage yellow wedding dress, those home made wooden flowers, the beautiful ceremony arch, that Californian sunshine... it's just all so glorious! The couple met at college when they were both studying toy design. They both now work for toy companies so I'm sure you can see where their wedding inspiration came from!

Michelle and Forrest met while at photography school together, so of course their wedding day was going to be a visual dream! They describe their theme as an ‘eclectic rainbow wonderland’, and planned it the way they plan most things in their life - gathering up all different things that they liked and hoping for the best! I just know you're going to love this beautiful celebration just as much as everyone at Rock n Roll Bride HQ does!