Brent and Tash’s laid back wedding took place at a gorgeous old school house in the middle of the Kiwi forest. They met when Brent moved in with Tash as her flatmate so they’ve never not lived together!

“Our wedding theme was ‘Grandma’s garden’'”, began the bride. “All the colours and flowers of a beautiful garden and the rustic-ness that my husband is attracted to. Our venue was quite shabby chic in style, so I wanted to add an explosion of colour.” 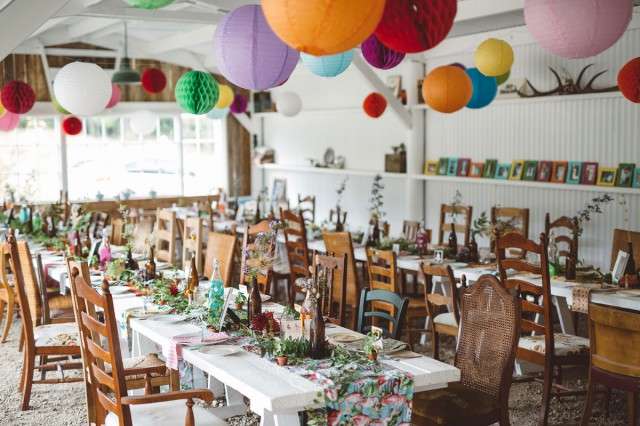 “We did loads of DIY including the table runners, napkins, and spray painting cutlery and picture frames. We also made all the place cards and put together the dessert table and the antipasto and cheese table. The cake topper, curtains hanging in the barn and our guestbook quilt (made by my grandmother) were also all homemade.” 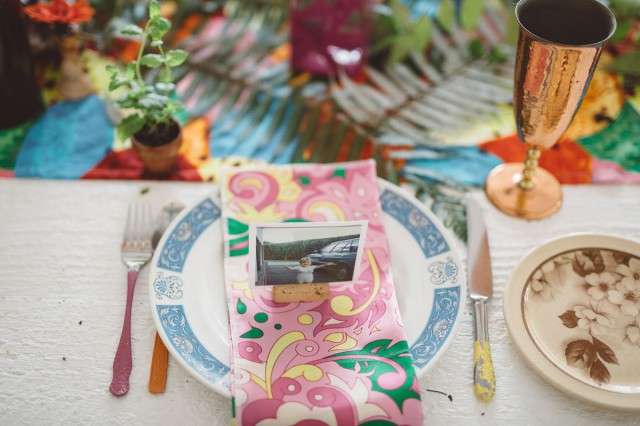 The couple’s favourite part of the day, was the ceremony, held in a classroom! “We worked really closely with our celebrant to come up with something that was personal”, Tash explained. “Neither of us are big romantics and many of her previous ceremony wordings made us want to gag from the soppiness. We kept it real and chose readings that felt more like us rather than the suggestions our celebrant provided from those her other couples had chose. We had an extract from Plato’s symposium and A.A. Milne’s Winnie the Pooh poem ‘Us two’. We also wrote our own vows and kept them secret from each other until the day. I vowed I wouldn’t cry and that made me a liar.” 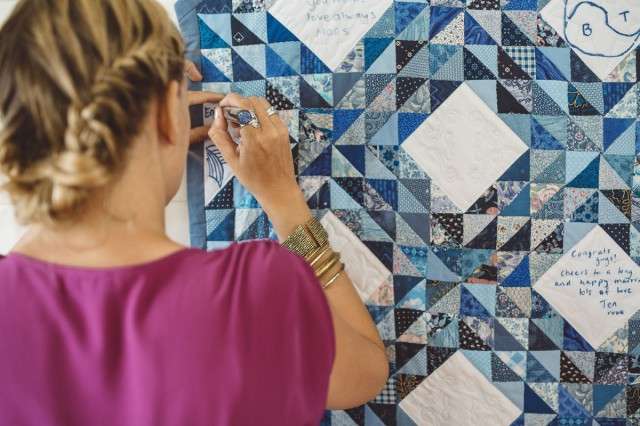 The biggest expense was the food. They served huge pots of paella with various toppings, tapas, cheese and extensive desserts! ” We also had hot meat pies come out as a midnight snack. It was so worth the expense, everything was demolished and our guests raved about it all. It perfectly fit our vision of a relaxed big family meal and seriously was some of the best paella we’ve ever had (including the stuff we ate in Spain), with the absolute freshest seafood. The tapas were to die for and buying bulk cheeses and chorizo meant we could have the best quality on those too.” 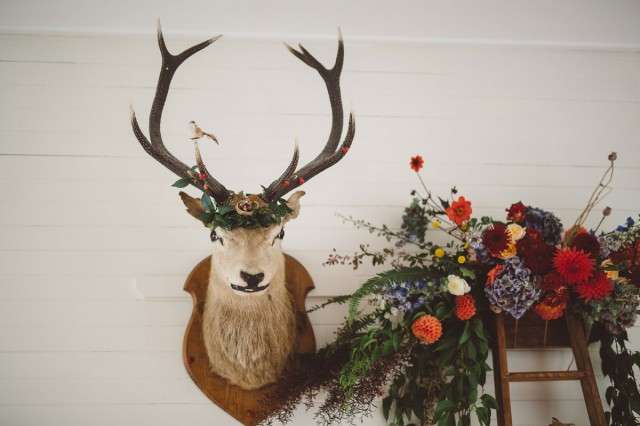 The bride wore two dresses – a white, vintage one belonging to her grandmother, and a beautiful burgundy number from Zac Posen at David’s Bridal which she bought while she was living in the UK. “My mother made my veil, the flowergirl’s dress and my bridesmaid’s skirt too!” she said. “We also really saved on my dress. I knew I didn’t want to spend a fortune on it and had a top figure of £800 in my head. I went and tried on a few dresses in a grotty local place, was horrified by the prices and completely uninspired by the designs. Next I visited David’s Bridal in London with a group of girlfriends. I went in with an open mind and encouraged my friends to pick stuff for me to try on (including picks they wanted me to try on just for a laugh). I don’t wear a lot of white normally and wasn’t 100% certain I wanted something completely white. I also didn’t want to spend lots of money on anything that felt like cheap fabric, was a boring design or didn’t make me look like a freakin’ movie star walking the Oscar red carpet.” 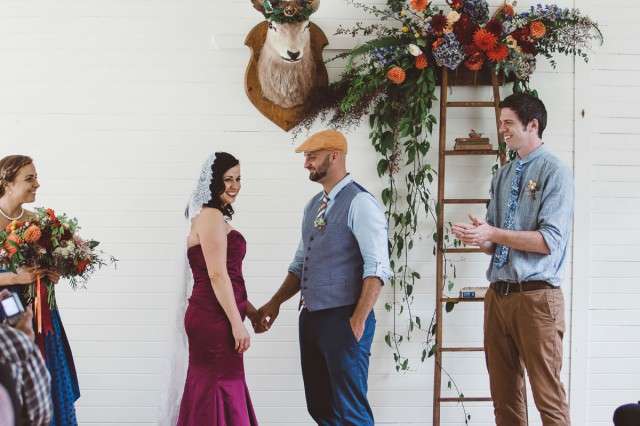 “After trying on about 15 dresses and feeling completely overwhelmed and uninspired; I asked the saleslady if I could look at some of the bridesmaid options. At this point my favourite dress had been a blush colour dress that did little to flatter my figure or colouring, had a ridiculous large skirt I kept tripping over and was about double what I wanted to spend. I liked it though because it was interesting. When we first walked in to the store I saw this amazing burgundy Zac Posen dress on the mannequin in the bridesmaid section and it was this dress I grabbed first. I put it on walked out and couldn’t wipe the grin off my face. My friends’ mouths dropped, I looked in the mirror and saw a babe staring back. I asked to try on a simple veil and when she put it on I knew I was done. I asked the sales lady how much and when she said £200! It was a done deal.” 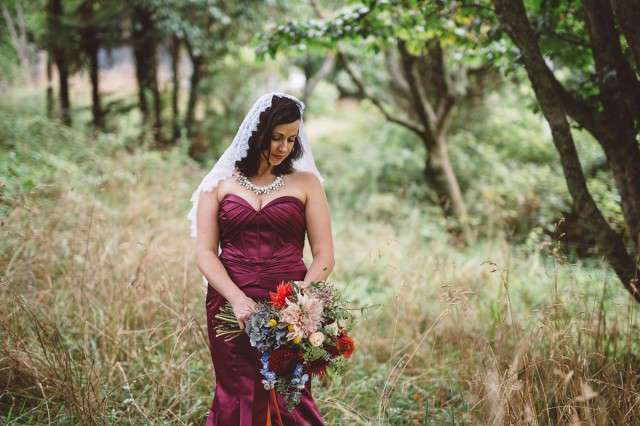 “I think everything went really well overall”, the bride concluded. “Not everything turned out quite how I envisioned, but it was close enough and the little variants were all the nicer knowing that our friends and family had created it for us. The only tip I have for other couples is not just to have a list of family photos but also to put them in the most logical order for your photographer. We had a list but wrangling people together when they wanted to go party was difficult. Unfortunately this resulted in me having to take over and yell at the groups we wanted to get it done quickly and logically. I could have saved my lungs and the frowny looks had I written the list in a logical order!” 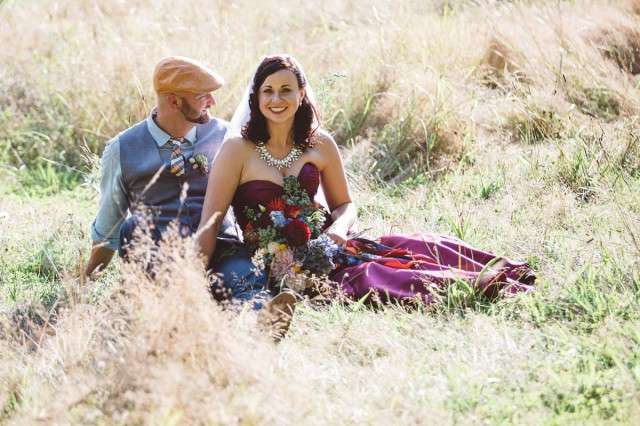 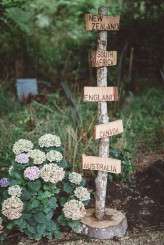 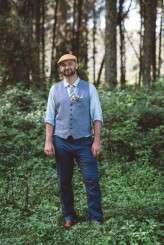