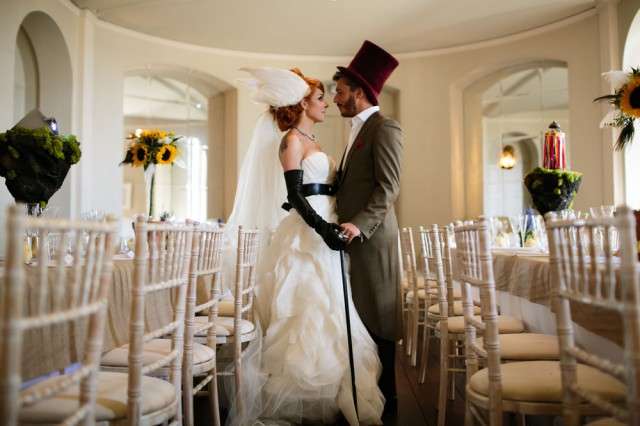 There really is no other way to explain Lucy and Benjamin’s wedding. There are Alice in Wonderland weddings… and there are festival weddings… but mash them both together and imagine everyone in attendance has dropped acid and you’re maybe halfway there to how bonkers this wedding was! Their wedding photographer Lee Allen described it as the maddest wedding he’s ever been involved with… and you know what, I can totally see why! 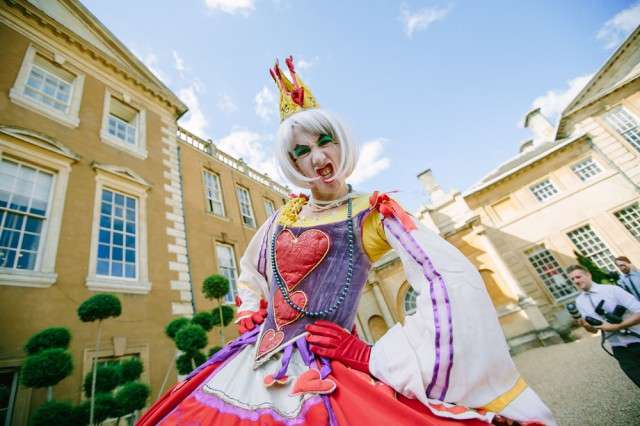 “We met at a friend’s BBQ and the week after went to Reading Festival together so we wanted our wedding to have a festival feel”, explained the bride. “We wanted people to feel like they had been on a weird acid trip that couldn’t have been real when they left! It sort just took shape over time. We met Hamish Guerrini, the Druid Minister who officiated our ceremony, at his stage, The Rabbit Hole, at Glastonbury two months before the wedding. After we met him we completely changed the wedding theme to include him! We added the tunnels and different rooms for guests to be led into.” 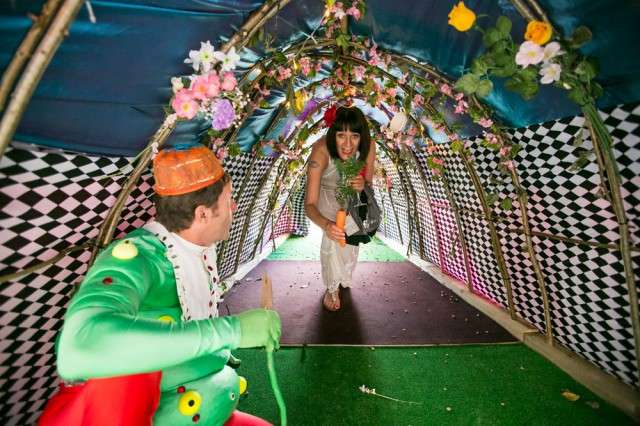 “I think we can safely say that our wedding was definitely a one off”, she continued. “Our guests arrived on double decker buses and we then lead them through tunnels into the venue. They got given a Tweedle Dum or Tweedle Dee card which told them which was the next tunnel they had to go down to get into the ceremony!” 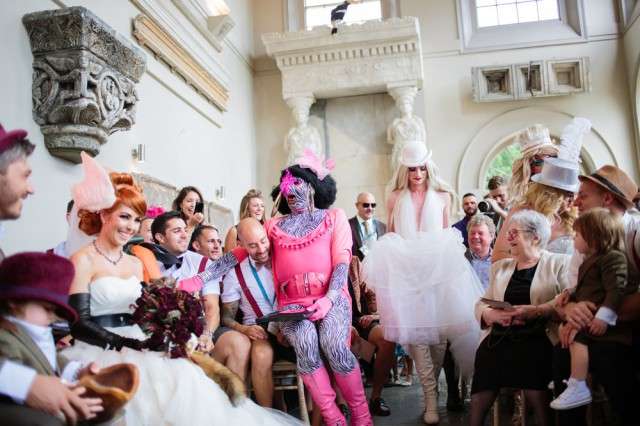 “We had a Druidic ceremony and were married by Hamish dressed as the white rabbit. This was the best bit of the day for me. We had Take That Never Forget and Bohemian Rhapsody as our hymns. We split the room into two sides and made them battle out the verses. The ceremony was gatecrashed by drag queens and the ring bearers where midgets.” 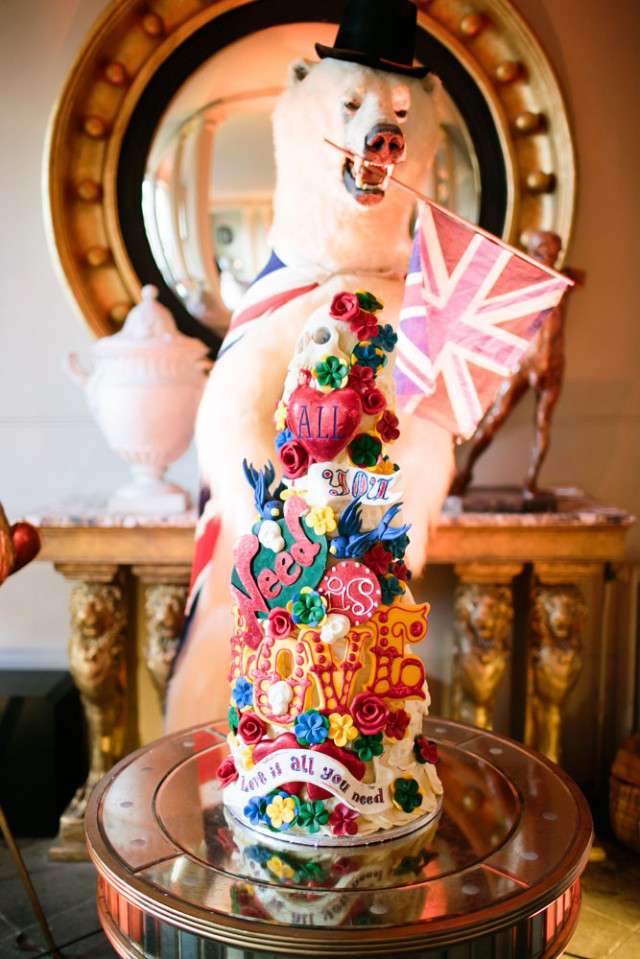 “After the ceremony there was finger food served by comedy waiters, sword swallowers, jugglers, and drag queens. We then had music and walking dinosaurs, and real tattoos being done in the “Tea-Quilla room”! The drag queens did a fashion show which ended in a bundle of drags and guests on the floor and we then lead everyone back inside the house for CHRISTMAS!! We had dancing presents, Elfs, Santa, and a walking rude yeti! We had a snow machine and mulled wine and mince pies. To finish the night off we had our favourite tribute band, Jilted Generation playing, steampunk clowns on stilts, and human disco balls!” 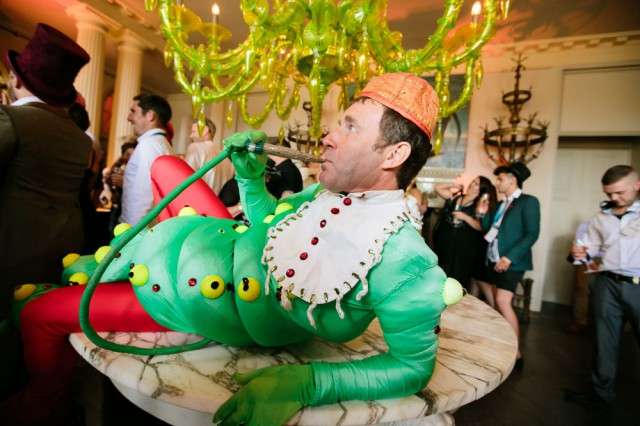 Their venue, Aynhoe Park, has lots of amazing taxidermy everywhere (including a full sized giraffe and a unicorn! So on the tables, they also had some taxidermy provided by Death and Glory. “I found Death and Glory through Facebook and I contacted them about a vast array of taxidermy we wanted for the wedding. Even though Aynhoe was already draped in taxidermy, it was ‘our thing’ too so we had to have our own.” 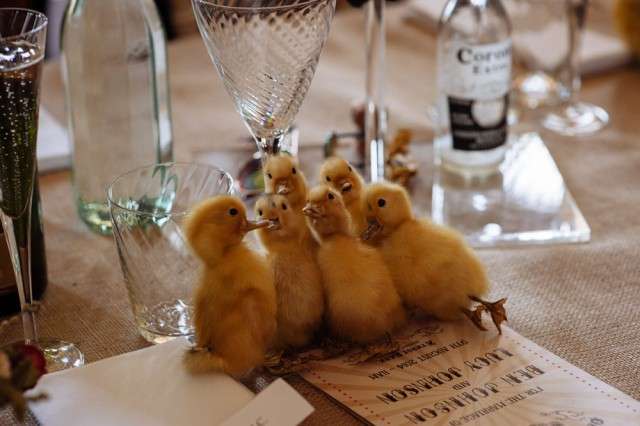 “The bridesmaids wore headbands adorned with magpie feathers and skulls, my bouquet had a rabbit skull, a rabbit head, a goldfinch, a mouse and a fox tale, I also wore a swan wing headdress that I picked up in Portobello Market, and the ‘box’ containing the rings was actually a badger skull laced with white rabbit fur. Ben also wore a matching goldfinch as his button hole garment rather than the usual flower!” 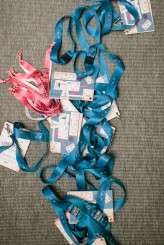 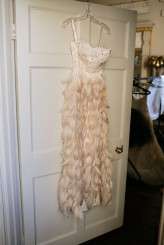 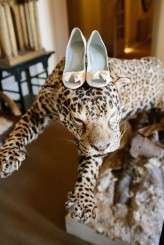 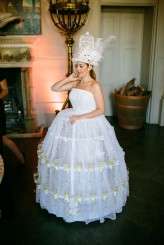 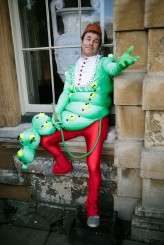 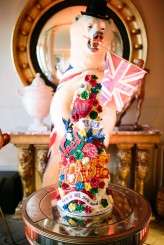 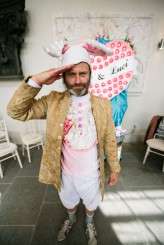 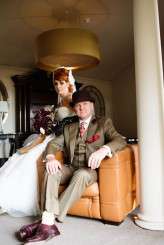 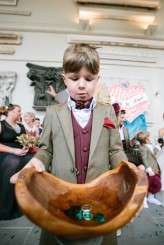 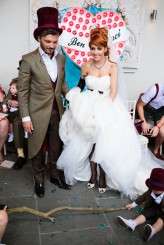 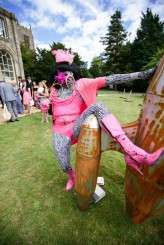 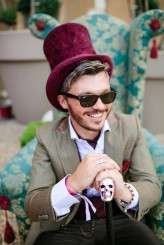 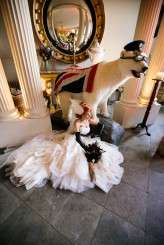 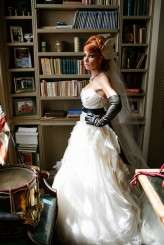 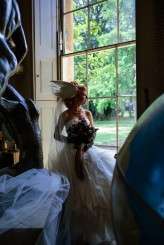 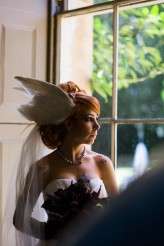 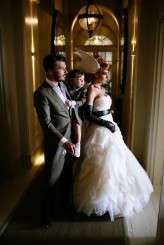 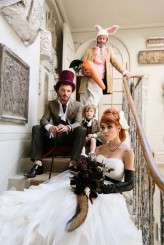