When we were 17, a friend of mine and her boyfriend got each other’s names tattooed on their hips. Unfortunately, but probably rather unsurprisingly, the relationship didn’t last and they both ended up getting their once oh-so-permanent reminders of first love covered up with something else.

Inadvisable teenage tattoos aside, I am still a big fan of matching ink and more than ever I’m seeing couples opting for tattooed wedding bands, or a small symbol on their ring ringer, in place of physical wedding band.

While researching for this article I was massively disappointed to find that near enough every single piece I read on this so called ‘trend’ (if tattoos are a passing fad then it’s the longest running one I’ve ever heard of!) we’re wholeheartedly negative. “Oh if the marriage ends they’ll be stuck with a tattoo they hate”, “Laser removal is expensive and painful”, “It will be a permanent reminder of a relationship gone bad” they warned.

I felt completely depressed. Yes, we should be cautious and unimpulsive with big decisions like getting a tattoo… but surely even more so with a big commitment like, oh I don’t know, choosing to get married! It is a sad fact of life that some marriages end in divorce, but – shock horror – many of them do not. 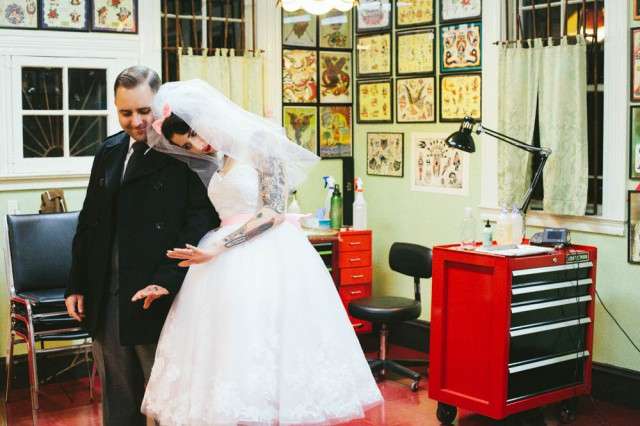 I would hazard a guess that the majority of people that would opt for a wedding tattoo would not be (tattoo) virgins. It’s unlikely that someone would have the impetus to go under the needle if they weren’t already invested in or a fan of tattoo culture.

So far from being a trend that will soon expire, if you’re a fan of ink then wedding tattoos are a gorgeous way to symbolise your marriage and tell your partner that you believe this union is forever. It tells the world that you don’t need a big rock to show that you love someone and that you’re doing something unique and just for the two of you.

Anyway, if you’re marrying the right person, the way you choose to symbolise that union – whether with a diamond, a band of gold or a heart inked on your ring finger – really shouldn’t matter. The fact that you’re committing to this person forever should be the only permanent reminder you need.