A new year is upon us so it’s the perfect time to clear the decks and start to make plans for progressing your business. The “new year, new me” mindset will only get you so far though. You have to set some goals and have some plans, but then you actually have to go out and make them happen too.

It is in no way easy to make radical life (or career) changes, but it certainly can be done. So here are seven resolutions you can make for yourself right now to help you completely dominate the year ahead.

1. Define what you really want

Have you ever sat down and asked yourself what you really want?! Forget the self-deprecating or society-friendly answers here. Stop being embarrassed, and don’t ever think “Well that’s never going to happen so what’s the point?” The first step in getting what you want is asking for it. You have to at least being brave enough to vocalise it.

It’s not uncommon to feel lost when it comes to career happiness. From an early age the education system force-feeds us the idea of what our lives should look like: Do well in school, go to uni, get a job, work your way up, get married, have a family… but what if you don’t want all that? What if you allowed yourself to consider what you really want. What if there was nothing holding you back? Then what would you do?

Before you can make any plans or changes for 2015, you have to get crystal clear about what you really want out of your life and business. Stop being shy about it, it’s time to get honest, even if it’s just to yourself.

Let’s not sugar coat it, running your own business is bloody hard. It’s going to take a lot of work to get to where you want to be. So after defining what it is you really want, you next have to make a solid commitment to making it work. I’m not talking about some airy, fairy, “Yeah I’m gonna eat better this year” resolution, you need tangible – and most importantly – measurable goals to help you get there.

For example, instead of saying “This year I want to be more profitable”, set the goal of exactly how much money you want to make. That way, it’s much easier to a) know when you’re on, or off, track b) plot your trojectory to get there and c) find your way back to your pre-tedermind path if you happen to get off course.

3. Stop comparing yourself to others

Oh this is a big one because I KNOW every single one of you struggles with it. The reason I know that for sure is because I do too. Constantly.

But guess what? Comparing yourself to others is like drinking poison and expecting the other person to die. It’s futile, but worst still, it’s a guaranteed route to self-loathing. Make a promise to yourself to focus on your own stuff. Stop looking sideways at what your competitors are doing. And remember, someone else’s success does not constitute your failure. 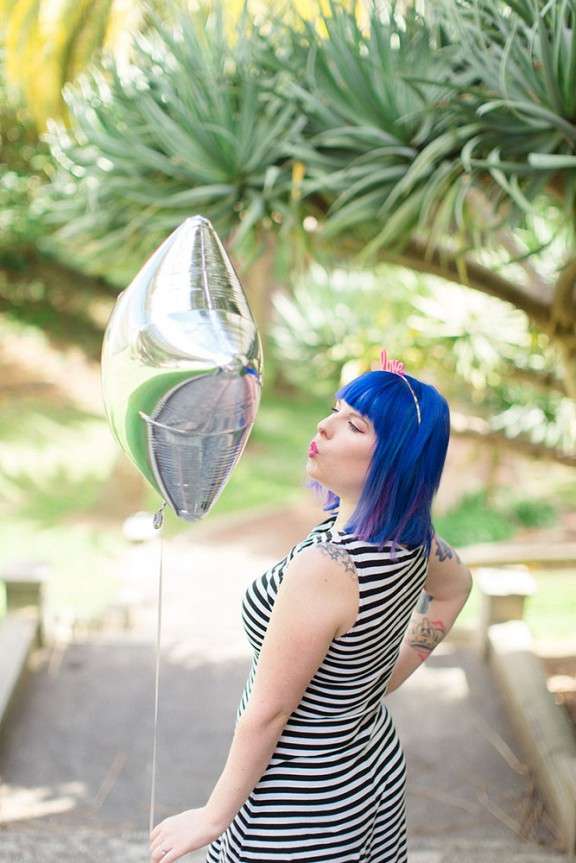 In a similar way to comparing yourself to others, it’s all too easy to look at what everyone’s doing and trying to emulate it. Being the same as everyone else is not only boring, it’s a certain way to fail. Not only will you end up becoming something you’re not, it’s nearly impossible to compete when you’re doing the exact same thing as everyone else. If I tried to make Rock n Roll Bride fit into the mould of what all the other wedding blogs do, I 100% would not be where I am today.

As an entrepreneur you have to find your unique voice. Conformity isn’t for people like you. It’s for those that want to commute to work, get a P45 and a nice pension. Obviously there is nothing wrong with this lifestyle if it’s what someone wants, but it’s not the only option. Real greatness demands that you desire to be yourself and to do things that make you happy. So embrace your weirdness and do something different. Be a rebel, cause some trouble, be that round peg in a square hole…

Running your own blog or business can be a very solitary career path if you let it, but your business will grow much faster if you have others cheering you on from the sidelines. These are the people that you can confide in, that you can spitball ideas with, and who you can go for a much needed drink with at the end of a hard day.

These friendships might come out of the most unlikely places too. Shauna was my graphic designer for years before I met her in real life, I stalked (for lack of a better world!) Gala online for ages before we met in person (we went for pancakes in LA!), Lisa sent me a fan latter (in the actual post – haha she’ll kill me for telling you that!) and I saw Sophie‘s products featured in a magazine and then reached out to her on Twitter!

I guess what I’m trying to say is that don’t be afraid to email the people you admire and see where those connections lead. Don’t do so with any alterer motive other than wanting to make another friend though. If you message someone thinking “What can I get out of this, where will this go, what’s in it for me?” it will show. Just be genuine, and charming and go out and make some new friends.

If there’s someone you have a bit of a business crush on, make a resolution to email them (do it TODAY!) I mean, who wouldn’t want a fabulous new friend like you?

It’s a very British thing to keep quiet about the fact that we’re all in this to make money. If I’ve learnt one thing by spending a lot of time in America, it’s that that that shit won’t fly if you really want to make waves! Its not about being disingenuous or slimy about it, but as much as we might adore what we do, we are all running our businesses to make a profit. That’s nothing to be embarrassed about.

You work hard and you deserve some financial reward for the effort you put in. If you don’t make any profit you don’t have a business, you have an elaborate hobby. It’s as simple as that. Now, if that’s what you want, then awesome, but if it’s not then it’s time to stop pretending otherwise!

Are we really selling out if we earn a living by doing what we love? I say no way! A ‘sell out’ isn’t someone that’s smart enough to make money on their own terms, it’s someone who compromises their values for a quick buck. So as long as you don’t fall into that latter camp, you have nothing to feel shy or guilty about. Rock n Roll Bride is a six-figure business and you know what, I’m BLOODY PROUD OF THAT FACT. 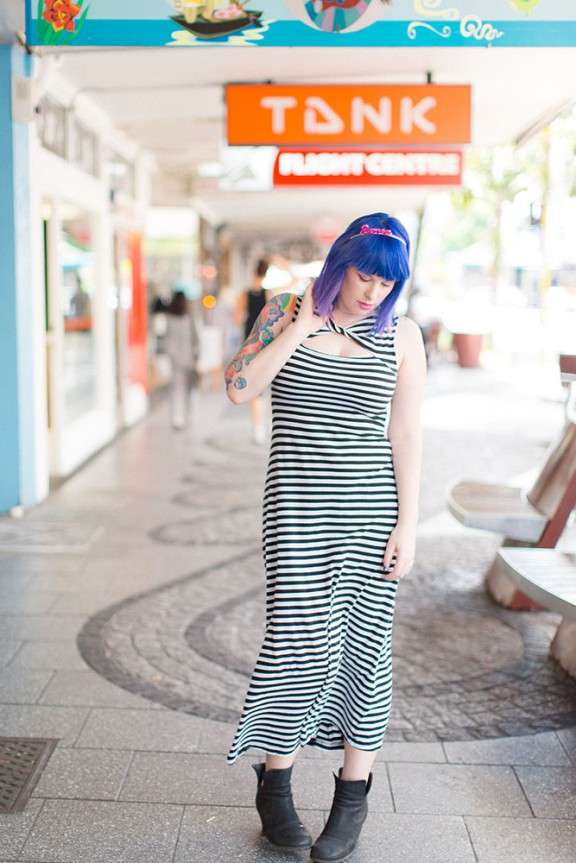 7. Sharpen up your skills

If you run a business that has an online presence, then you’ll already know that things in this space move very quickly. Its imperative to stay ahead of the curve or you’ll simply get left behind.

While there is plenty you can learn through trial and error, or by reading business blogs and books, there is nothing quite like investing in yourself and taking the time to do some actual business training. If you are not effectively harnessing the power of the internet then you’re missing out. Not in an abstract FOMO kind of way, in a PROFIT kind of way.

The Blogcademy‘s in-person workshop has been operating for over two years now. Since our first class in October 2012 we’ve travelled the globe and have taught nearly 1000 people how to do exactly this. They’ve gone on to do incredible things from raising $100,000 on Kickstarter, quitting their day jobs and supporting their families, and being sponsored for overseas press trips!

One of the things people said to us as soon as we launched the workshop, was that they would love to be able to take part online. For many people, attending a live event is either logistically or financially impossible. It’s taken nearly two years for us to figure out how to make the course work in the digital space, but I’m thrilled to tell you that we’ve now cracked it!

The course will comprise of videos, transcripts (which is over 300 pages and more like a business book in it’s own right!) resources, worksheets, activities, and access to our lively private forum. It’s basically the exact same information as you get in the live class, without ever having to leave your living room or take off your pyjamas. 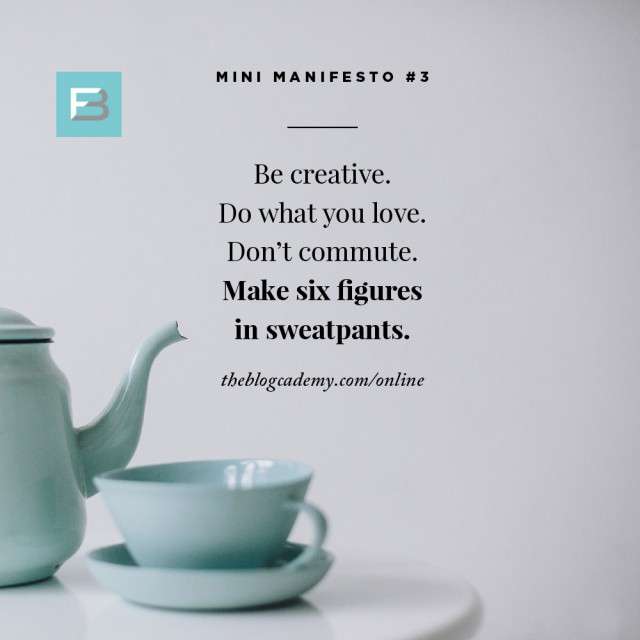 We’re are so excited about this that we just couldn’t wait until the 29th! So we have very special FREE videos to keep you going in the run up. The first one, my video on 10 Lessons Every Blogger Needs To Learn, is live right now. Login with Facebook, and scroll down to watch it!

Next week, Gala’s video on how to have a charismatic blog goes live, and the week after that is an exclusive preview of Shauna’s business blogging plan segment from the actual class! If you want to be reminded when the new videos go up AND receive a discount code for Blogcademy Online when it launches, sign up to our mailing list. Simply enter your name and email address where it says “Get our top secret blogging resources” on the front page of our website.

Finally, our next in-person class is in Los Angeles in February, and it’s a little different. If you want to come and meet us and other bloggers and entrepreneurs in person, get yourself a pretty sweet (branded!) swag bag, memories that last a lifetime and get one-on-one feedback on your specific blog and business, we’d love to see you there!

Whatever your plans for the coming year are, I’m right here, cheering you on because I know you can do it! Yes, it will take hard work, sacrifice and a lot of late nights, but don’t let that stop you. Go out and make 2015 the year that you start to live your life on your own terms!