Bella and Matt were married at Cowparsley, a wedding venue in Somerset. They wanted a relaxed, outdoorsy day with a festival feel, a picnic lunch and a meaningful ceremony.

“We searched for a long time for a venue that would give us free reign to do what we wanted, (at an affordable price!) and we had nearly given up when we discovered Cowparsley”, the bride began. “The whole day; ceremony and reception, was spent in their delightful farmhouse country garden. We had our ceremony in a lovely little orchard, saying our vows in front of a tree that we decorated with Mexican flag bunting, flower garlands, paper petal strings, and paper birds. We drank Pimms and played croquet and skittles on the neighbouring lawns, where we also relaxed on blankets for our picnic style feast. There was a lovely big antique canvas marquee, in which we danced in the evening, before sitting round the bonfire back in the orchard at the end of the night. Everything being in one place allowed everyone to kick off their heels and make themselves at home, rather than standing on ceremony. This informal atmosphere was very important to us.” 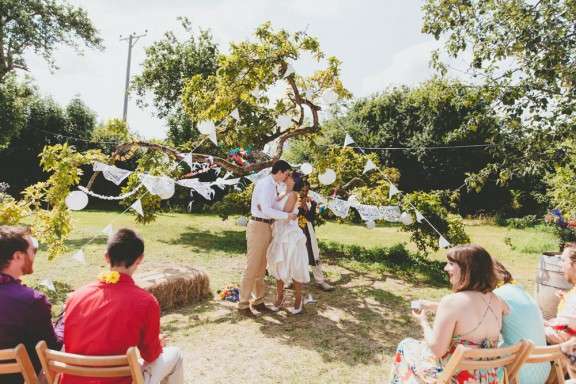 “We wanted to get married outside, under a tree, in the sunshine”, she continued. “Sadly, it is not currently possible to have a legal marriage service outdoors in England, so we went to a register office in the morning with Matt’s mum and my step-mum as witnesses. In and out in 20 minutes, no fuss. For what we considered the proper ceremony, that afternoon, with our family and friends, we considered hiring a Humanist minister, as we are not at all religious. However, we felt that it would be a little odd to have a stranger preside over such a personal event, especially as we had quite an intimate wedding, with just 70 of our closest friends and family. So we asked a close friend to be our celebrant. Esh is an actor, so very confident with public speaking. He has also shared a flat with us in the past, so knows us both very well, and has a unique insight into our relationship! He did a wonderful job, creating the relaxed, fun tone we wanted, and giving a brilliant speech in which he logically proved that our relationship was a good one, with reference to a theory by philosopher Bertrand Russell!” 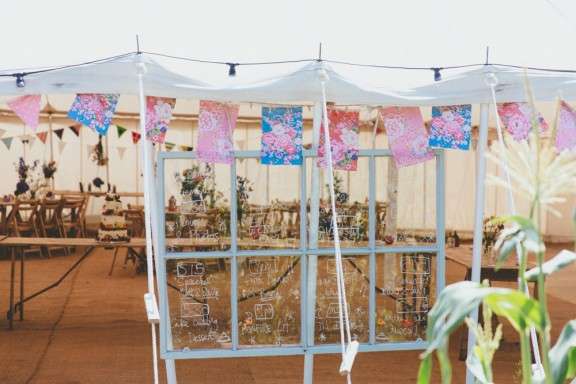 Bella wore a gorgeous dress which her step-mum made especially for her with Rocket Dog shoes which she found in TK Maxx for £17! In her hair was a homemade flower garland. “I tried on some dresses in bridal shops, but none of them felt very ‘me’. I felt like I was in fancy dress as a Disney Princess in most of them! That’s probably exactly what some women want, especially if they’ve been dreaming about their ‘special day’ since they were little girls, but I didn’t really have those daydreams. Although I did want a big beautiful, over the top dress, it was vital to me that I didn’t feel restricted by it. On the day, I sat on the ground, danced like a dervish, and even climbed a tree! In the end my step-mum, Deb, made it for me. She was terrified, as she had previously mostly made casual clothes for herself, to which she generally took a slightly slap-dash approach, but she was very careful, and it turned out beautifully. It was made from a big square of silk, which I then artfully tucked up, using ribbons attached to the waist band. It gave it lots of volume, but in a playful, asymmetrical way, that avoids the stiff formality of a big meringue.” 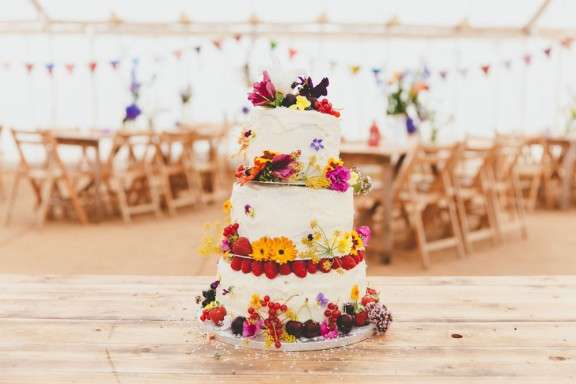 To save money and keep within their £7500 budget, the couple had a friend make their cake, they arranged the flowers themselves and designed and printed their own stationery. For food, they invited their guests to bring a dish each (instead of a gift) which they served, buffet style. “The food was the centrepiece of the day”, said Bella. “We were prepared to just order take away pizza if we ended up with too little food, but we needn’t have worried. We had a spectacular spread of delicious vegetarian food of all kinds. There was far more than we could eat. Besides being delicious, it was a wonderful culinary celebration of everyone there on the day. Many people brought dishes that were traditional in their culture, or family, and people really enjoyed being able to contribute in such a substantial, creative way. Guests proudly pointed out their dishes, and swapped compliments. It made it feel like a massive party in which everyone was actively involved, instead of it being just ‘our day’ and everyone else being mere spectators. Matt’s parents kindly provided booze for the daytime, and we asked guests to bring drinks for the evening, rather than having a bar, as the venue didn’t charge corkage.” 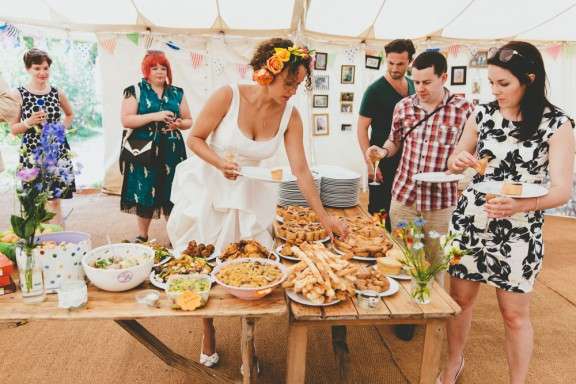 “We had been together for nearly 8 years when we got engaged, and over 9 years by the time we got married”, she continued when I asked about their inspiration. “We weren’t even sure we believed in marriage. We don’t believe in God, so had no desire for a religious union. We are feminists, and object to the patriarchal tradition of the woman being given from father to husband as a piece of property to be owned. We also questioned the idea of promising to be with someone forever, given that we are fallible and cannot possibly know what the future holds. BUT, we are also romantics at heart. We were committed to each other, and we were grateful for, and proud of, the partnership we had built, and we wanted to celebrate that. In a secular life, it is easy to miss opportunities to commune, and appreciate the good things. This felt even more important in the wake of the deaths of both my parents in recent years. We are each other’s family, and we wanted to make that official.” 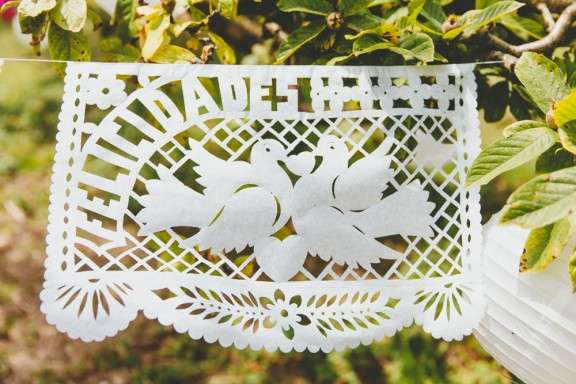 “It was vital to us that we create a wedding that reflected us, and our values, rather than just conforming to tradition. I walked myself down the aisle. We wrote our own vows, and we thought very carefully about what marriage meant to us. Matt actually said in his vows that we are not soul mates, and we would be okay without each other. It might not sound very romantic, but to us it is. We don’t believe in fate. We believe that we have chosen one another, and that is what makes it so special. We didn’t promise to love each other forever. We promised to be kind and do everything we can to enable our relationship to continue to flourish, because it is incredibly precious, and that is all we can do.” 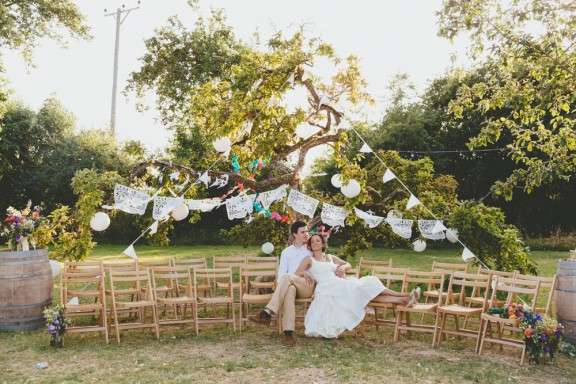 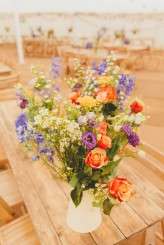 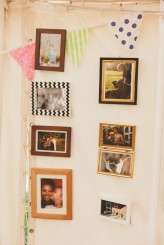 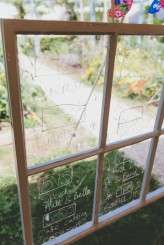 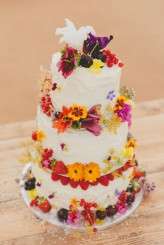 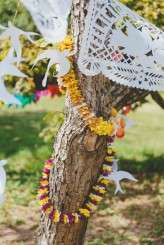 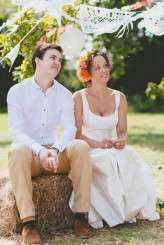 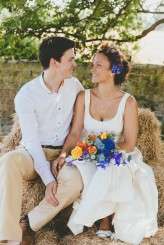 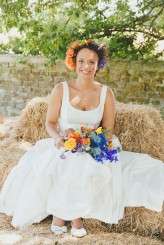 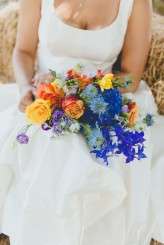 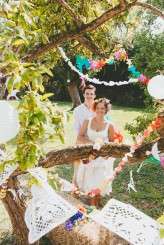 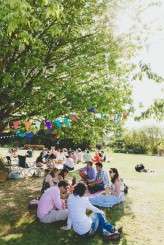 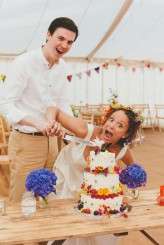 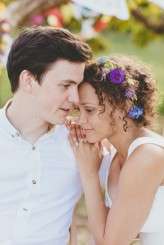