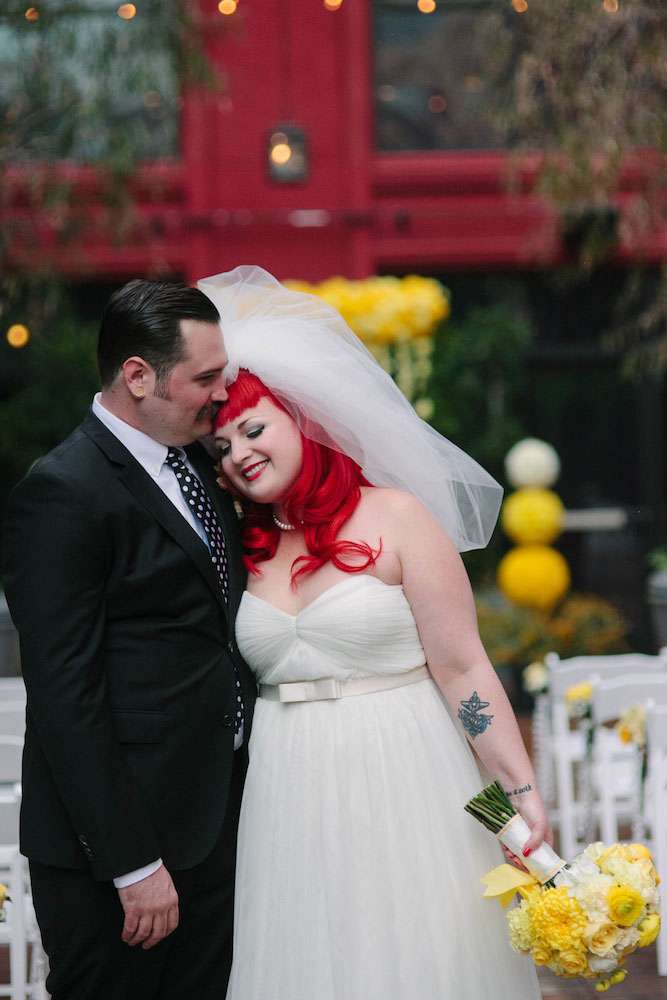 Being a florist, Becky always knew that flowers would play a big part in the décor of her wedding. So when she and Daniel for engaged it was first thing on her agenda! The day had a retro and Rock n Roll theme and was held at The Redbury Hotel in Hollywood.

“As a floral designer, I’ve had visions of my wedding long before I had a ring”, Becky began. “I was looking forward to designing a wedding that was different from our other clients. Currently, pastel pallets are in fashion and those damn succulents just won’t go away. I wanted to use traditional flowers (like carnations and mums) to capture our mod theme but used in modern exciting ways. Likewise, we used traditional styles with current and fashionable flowers; all the mom’s had classic pin-on corsages but with beautiful yellow garden roses. I’m just very lucky that my business partner is such a hard worker! She constructed an 8′ tall ombre curtain of carnations and a couple of 5′ tall flower topiaries for the ceremony.” 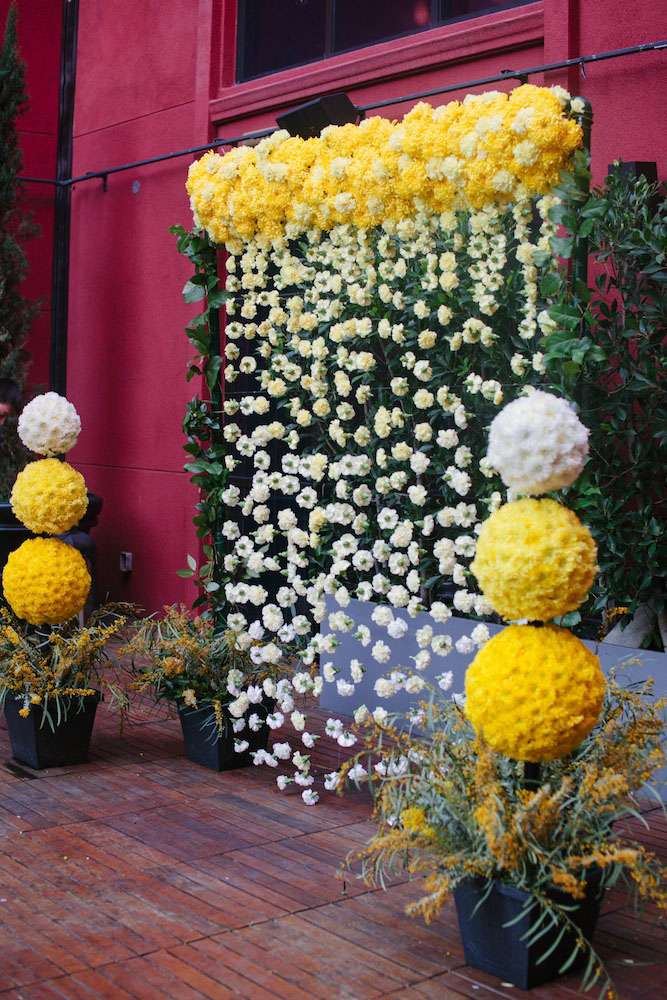 “Daniel and I met at a bar five years ago when his band was on tour”, she explained “hence, the importance of our Rock n Roll theme. Had it not been for Rock n Roll we never would have met! He was living in Portland, Oregon and I had just moved back home to Northern California after graduating from San Francisco State University. We did the long distance thing for a spell before we just went for it.” 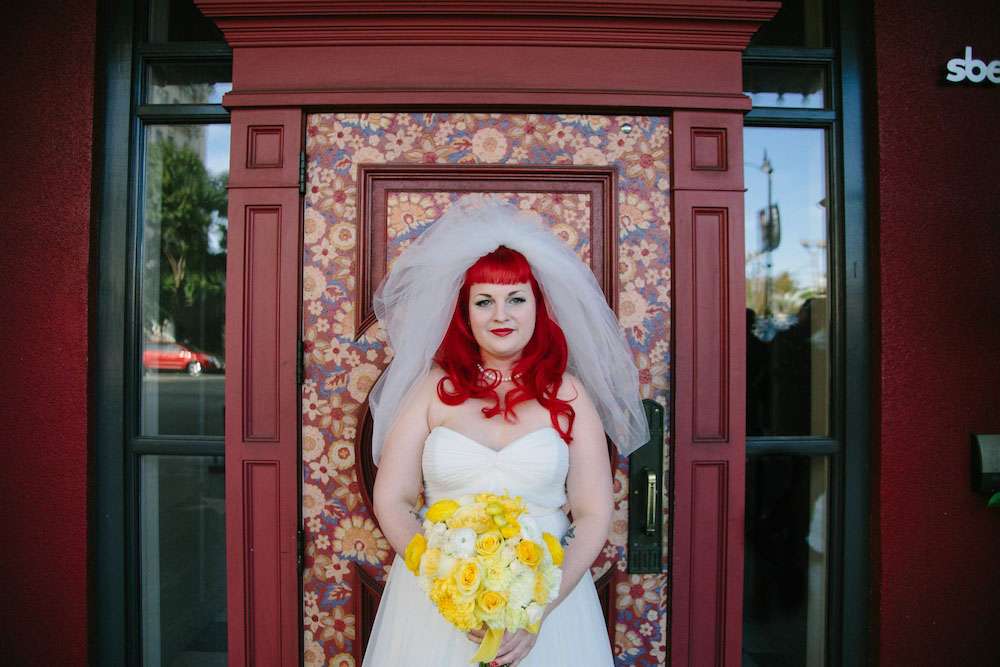 “The theme for our wedding was based on our mutual Rock n Roll style and my love of things mod, bold, big…and polka dotted. When people asked what the wedding would be like I said it was, ‘music and mod meets polka dots’. The inspiration for our theme was derived from our desire to throw a party that was distinctly us. I’m a bold loud gal and I think the wedding reflected that.” 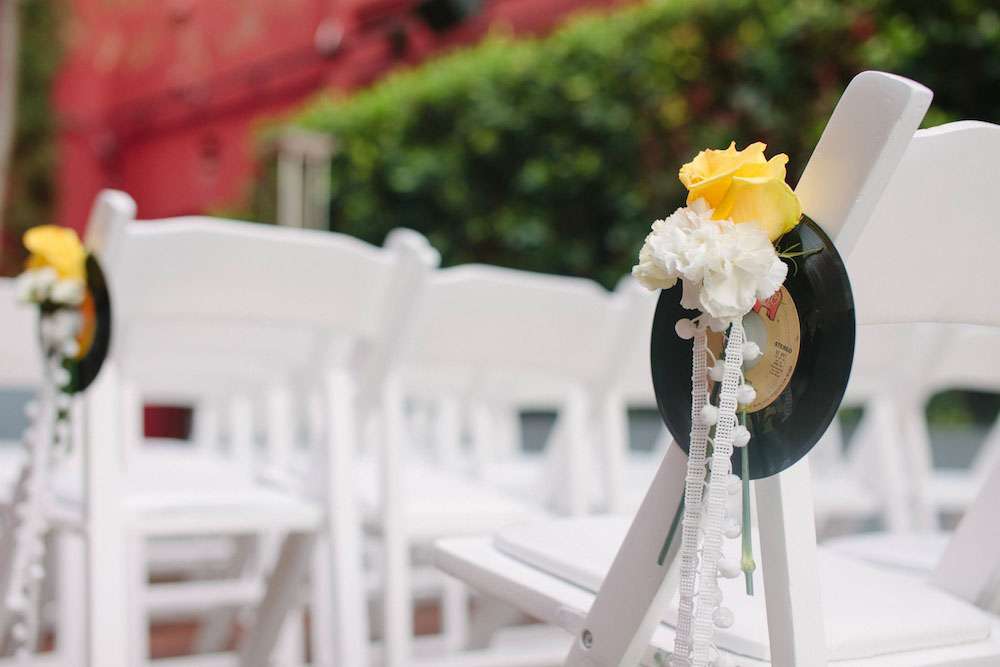 “Once we had our theme we ran with it all the way. A graphic designer friend made record shaped invitations and a huge concert style poster to use in lieu of guest book. Our wedding favors were custom guitar picks and we used vinyl records everywhere from decorations to signage. The hardest part was picking a venue. We saw a lot of pretty places but that was the problem, we didn’t want something romantic we wanted something fun! Once we saw that The Redbury Hotel was across the street from Capitol Records I knew we were on to something. Each room at the venue comes standard with a record player and records provided by Capitol. That cinched the deal…oh, and they would let me have an eight piece rock band (after lots of persuading).” 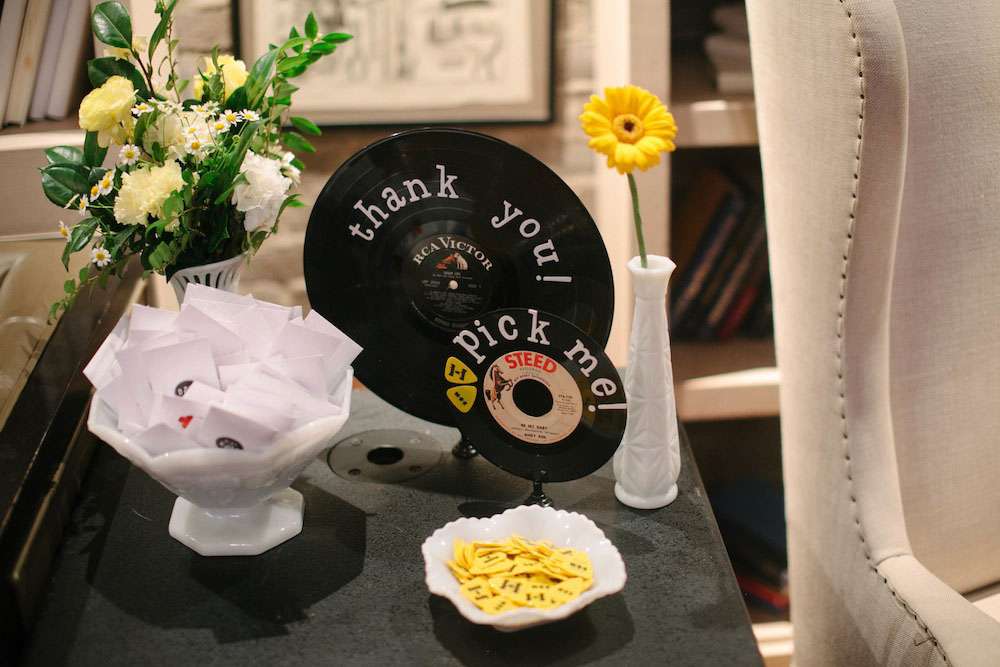 “Obviously the music selection was very important to conveying our theme”, she continued. “Picking DJ Jeremy Price was essential! I knew I would rather die than have a top 40 DJ at my wedding. Our night was filed with loads of soul music and of course, Rock n Roll! Our entire ceremony was set to T.Rex songs. We kept it as a surprise from everyone and even rehearsed without music to keep parents out of the loop. The bridal party walked out to ‘Bang a Gong (Get it on)’ and I walked down the aisle to ‘Cosmic Dancer’. After our kiss ‘Children of the Revolution’ blared out and our guests loved the song selection! I’m pretty certain no one else but me would select ‘Band a Gong’ for a wedding processional…and I loved it! Oh, and our first dance was to The Ramones ‘Baby I Love You’.” 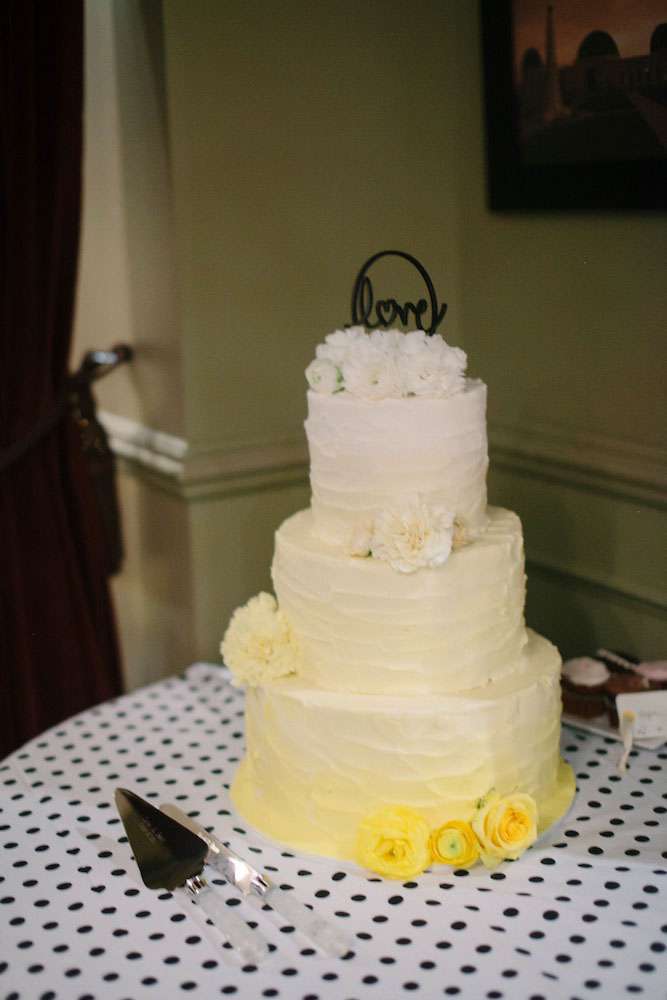 “I waited a long 32 years to have this day and I was lucky to receive such generous financial support from family”, the bride concluded. “Without them I would have just eloped and not have my dream wedding. I hand-picked every detail and I don’t regret any of it. I really did have my dream wedding in every way and I don’t think I would have done anything different. I tell my own clients that if there is something that is a ‘must have’ make it happen and cut something else that isn’t. I purchased many cool items off Etsy and I did some DIY projects when I couldn’t find exactly what I wanted. I made the signage using old records and stick-on polkadot letters.” 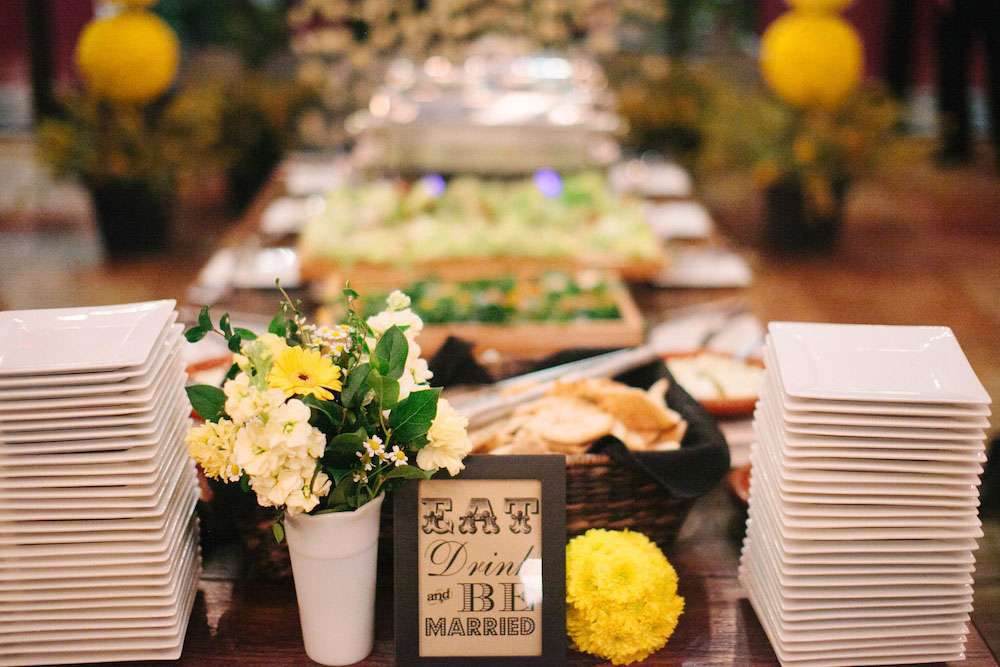 “In my husband’s vows he mentioned how my determination is an endearing quality and my refusal to take no for an answer was really in full effect when planning this wedding. Booking that band was my main priority and I jumped through many hoops to do so. So my advise to the betrothed would be…give ’em hell!” 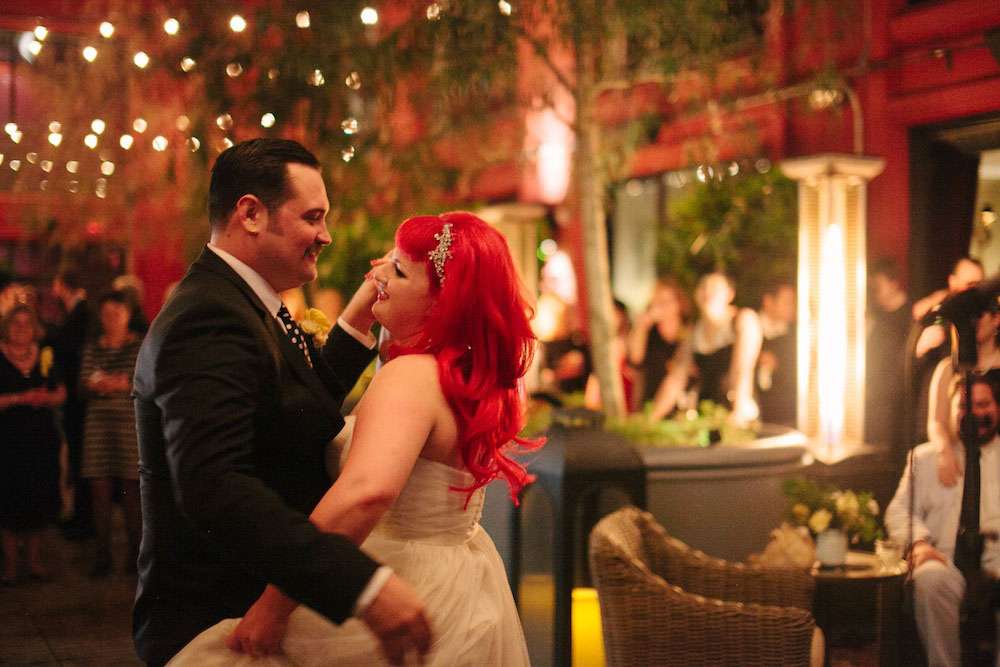 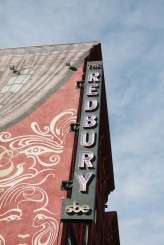 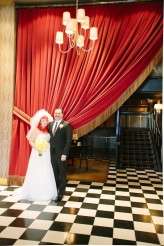 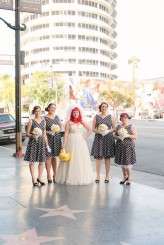 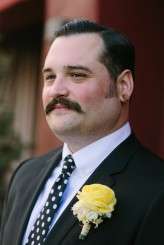 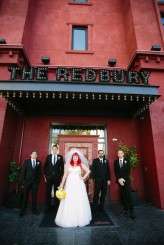 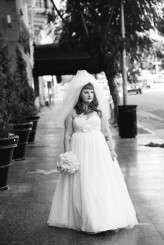 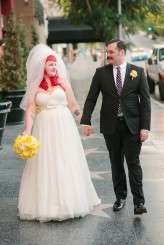 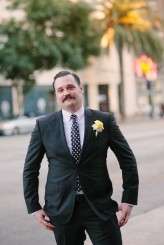 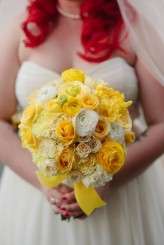 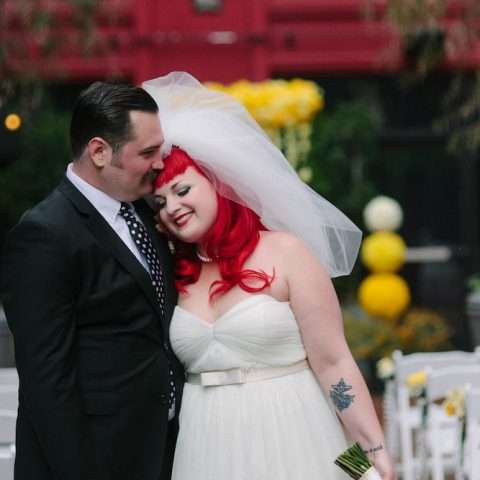 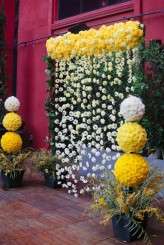 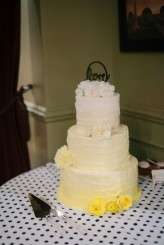 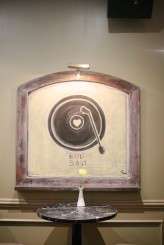 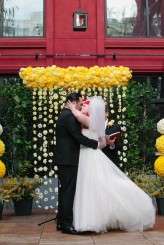 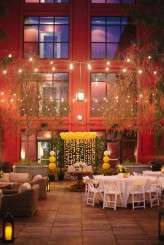 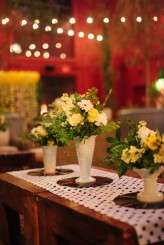 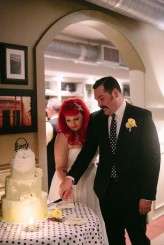 Robyn and Ash were legally married in Vegas at the Chapel of the Flowers but they wanted to host a big party when they got back to Yorkshire for all their family and friends. The party had a really low key, retro and kitsch vibe, hosted at their local community centre. The flowers came from a local flower market, the cakes were from various supermarkets and the stationery was made by the bride. Instead of a fancy meal they served wood-fired pizza and the night ended with - who else? - an Elvis impersonator!