Being your own boss is the most wonderful thing. Since launching Rock n Roll Bride in 2007 I’ve discovered a LOT about myself, the wedding industry and running a business. But if there’s one lesson I learnt faster than anything else, it was that I couldn’t do everything myself. For example, I could have spent hours wrestling with Photoshop to come up with a design for my site, or I could work a little harder on the things I am better at so I can pay my designer to do it for me.

However, to me, even more vital than learning to outsource, was finding those people I could trust to help or advise me on a more personal level. These are the people that you know will always have your back and your best interests at heart. Without them in your corner, running your own business will be a million times harder.

I kept Rock n Roll Bride a secret from ‘the real world’ until the end of 2008. Gareth and I got married that April and I was completely embarrassed to be still obsessed with weddings after our own big day was over. At this point, the blog was nothing more than a hobby anyway, I didn’t feel the need to make a big deal about it offline. Then, about a year in, I made my first big mistake. I was trying to install Google Analytics on the site (I am NOT technical AT ALL by the way!) and somehow managed to delete the whole thing!

So I went to Gareth and shamefully admitted that I had this secret blog… about weddings… that I’d somehow managed to delete. Despite his techy prowess, there was no way for him to magically bring the obliterated site back, but he offered to help me start over. We signed up with WordPress.org, bought rocknrollbride.com and I began again. 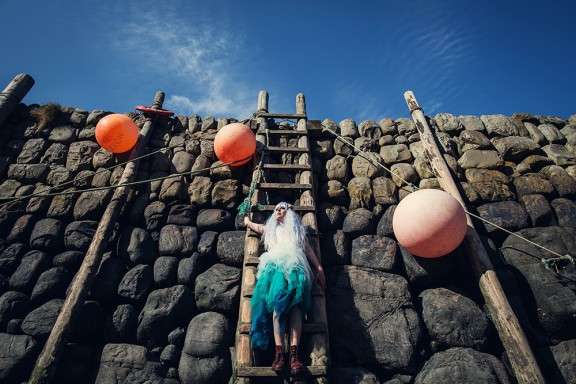 At the time I was totally gutted. I actually cried! However, in retrospect, it was one of the best things that ever happened for my business.

It forced me to re-evaluate what I was doing with the site and what the actual point of it was. I had to figure out what problem I was solving for my readers and why the blog even mattered at all. For the whole time prior to this, I’d basically been writing about my own experiences with a few cool weddings sprinkled in between (mostly sourced from other wedding blogs). Yet once I had to start again, it gave me a renewed focus and purpose for the site. I began to think about how I could use it to really help other people and what I could do to be different.

Call it serendipity, call it fate, or just call it damn good luck; but without my early mistake, and Gareth’s help to resolve it, I know Rock n Roll Bride wouldn’t be the same blog that it is today.

When you work alone, it can be difficult to know which is the right path for you. Trial and error is imperative. Launch and learn. You can’t unearth those valuable lessons by just sitting on the sidelines. You have to jump in feet first and not be afraid to occasionally mess up. Having allies on your side is vital too though. They’ll keep you sane, your head out of the clouds and help you get out of any sticky spots.