This gorgeous sneak peek reached 67,000 people when I posted it on my Facebook page

There has been a lot of talk recently from small business owners who are having trouble reaching all of their Facebook fans with their updates. While I’m not planning to get into a debate about why this might be, today I thought I’d share some ways in which you can make sure your posts reach as many of your fans as possible.

The fact of the matter is this: Even if your overall reach is down, you are still being seen by the people who really care about your content. And no, I didn’t really believe this either until I did some serious nerding out and research for myself!

If you’re reach is down, it is most likely that the people who aren’t seeing your updates any more are just not interested in you (harsh but true). If someone isn’t engaging with your posts, pictures and comments, Facebook shows them content from other places instead. The Facebook network is phenomenally complex, and to put it concisely, they have a much deeper understanding of what each of their users is likely to enjoy than you do.

So just how can you ensure that your posts are reaching those people that do care?

Facebook’s new Insights are brilliant and can give you a much clearer idea of who your fans are. They can tell you things like where in the world they’re located, their ages and what other pages they like. However, for me, the most useful stat has been the graph that shows what time your fans are online. It may sound obvious, but if you post something when more people are on Facebook, more people are going to see it! And you might be quite surprised at the results.

As my social media is linked to my business, I am mostly on Facebook during office hours, when I’m working. I assumed my fans were the same. WRONG! The people that like my page are mostly on there between 8 and 9pm UK time. So, if I have an important update that I want seen by as many people as possible, I post it during this time.

The general consensus used to be that you should limit how many times you updated your page to avoid annoying your fans. However I don’t really think this is the case any more, especially as not everyone sees everything you post. You certainly should never post links to the same articles multiple times a day (that is spammy) but posting a few times throughout a 24 hour period is a good way to reach more people.

After all, if you don’t post, you don’t reach anyone, and if you only post once, you’ll only reach those fans that are online within the one or two hour window when it goes up.

I generally post three to four times a day on my page. In the morning I’ll link to my blog post that goes live at 8am, around lunchtime I’ll usually post something like a funny story, a joke, a sneak-peek image or something I’ve found online that I liked, and mid-afternoon I’ll post a link to my 3pm blog post. Then, since noticing the stat about when my fans are online above, I’ve also started posting something else in the evening.

If you’re not posting new content on your own site multiple times a day, one way to make sure you’re still posting links to your own stuff is to re-share old, popular content. Remember, a lot of your fans may have only liked your page recently and won’t have seen everything you’ve ever written.

I’ve spoken before about why I think ‘evergreen’ content on blogs (i.e subjects that don’t go out of date) is better than news-related or topical articles, and this is a great way to get some new eyeballs on those older articles that you’re proud of.

Over the past few weeks I’ve started doing this at 8pm most days and the results have been astronomical. As you can see in the screengrab from my Google Analytics, below, by sharing a link to an old post blog traffic has increased dramatically compared to the previous week where there was no 8pm Facebook update. 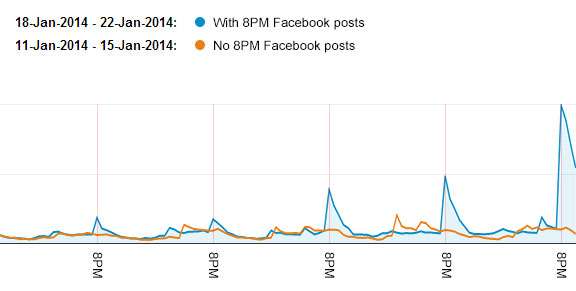 It’s important to make sure not everything you’re posting on your page is links to your own website. Your social media should not just be about promoting your own business, because that’s only interesting to a point. If you’re also sharing other things that your fans might enjoy they’re more likely to engage with your page because they like what you’re posting!

In fact, it is often the non-self promoting updates that get the most engagement. As you can see from the stats below, it is generally (nothing is an exact science these days!) the posts that aren’t direct links to rocknrollbride.com that reach the most people. The numbers under the ‘Reach’ column with the orange bar next to them are, unsurprisingly, how many people that update reached. The ones will pink asterisk next to them are the updates that didn’t directly link to my blog. 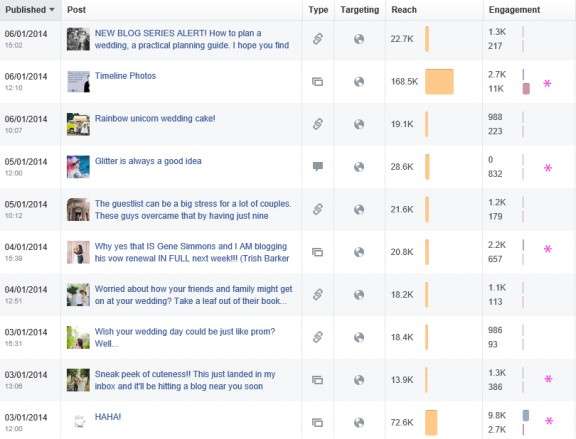 The fact that the engagement on links to my own website aren’t as high as other things is NOT a bad thing. The fact that people are engaging with the stuff on my page, whatever it is, will ultimately encourage Facebook to push everything I post further. I guarantee if I only ever posted links to my own blog posts, my overall reach would be much, much lower.

We (myself included!) are all obsessed with getting as many likes, shares and comments as possible, but if you’re not getting very many, don’t despair! Facebook is incredibly clever at tracking what it’s users do. Even if someone only clicks the link, reads the comments or full-screens the photo Facebook will still make note of it. They can even track if someone writes a comment but then deletes it before posting it, how clever/ slightly scary is that?! As the majority of your followers will never comment or like anything, these ‘invisible’ engagements are crucial to making sure your updates are pushed out to interested people.

A big complaint I often here is “My followers want to see my content, but because they don’t like or comment on stuff, Facebook doesn’t let them see it”. Sorry dudes, I hate to break it to you, but that’s just not true. Remember, even if someone is just passively viewing, opening, or reading things, Facebook can still track it. There are pages I’ve liked and then clicked links of or read comment feeds for a few times and to this day Facebook still shows me their updates. If people aren’t bothering to stop and read your content then they’re just not interested. Sorry.

Fake or un-engaged likes do more harm than good

If you want to completely fuck over your reach, then go ahead and buy fake fans. Honestly, it completely baffles me that people do this. While having a big juicy number of page likes may feel very impressive, it does much more harm than good.

Facebook doesn’t push everything out to every single one of your fans, it ‘tests’ your content on a small percentage first. If they engage positively then it pushes out to more and so on. If you have a large proportion of (un-engaged) fake fans in that initial push, it is unlikely that Facebook will deem your content worthy of showing to the rest of them. So, hypothetically if you had 5000 likes and 2500 of those were fake, your initial engagement is going to be down to just half your number of likers before you’ve even begun. Obviously, that doesn’t even take into account that many of your real likes may no longer be engaging with your content either. 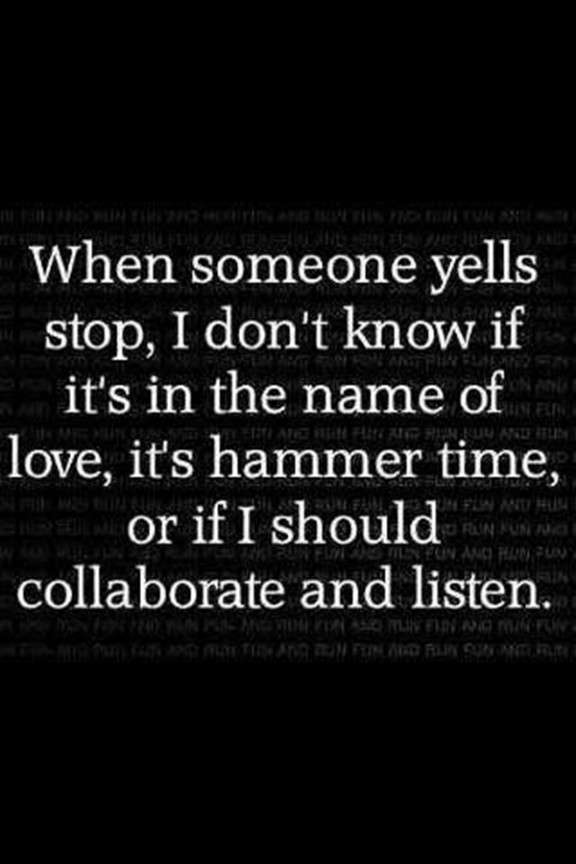 This amusing graphic reached 291,000 people via my Facebook page

Paying to promote posts can be very effective, if done in the right way

Facebook advertising can work really well when done right. We’ve used them for our page to gain likes in the past. The key is to be extremely targeted with who you want to reach.

We set ours up to only be seen by people who we know will like what we do (i.e female, they’ve got engaged within the last six months, are into tattoos etc). Because we know that these are the kind of people that will be interested in Rock n Roll Bride, they’re not only more likely to like the page but they also stick around and continue to engage with our content.

Building your audience with poorly targeted ads is pointless. They might see you and initially like your page, but if they don’t engage with anything that you do then they’re just going to stop seeing your updates. What a complete waste of time and money.

So instead of trying to ‘game’ the system, build your audience organically and slowly. If you share a lot of high quality content, consistently and frequently, it will end up naturally reaching non-fans (i.e. friends of fans) who will, in turn, hopefully like your page too.

Also remember this, Facebook is not a billboard and it was not designed to promote your business. The fact that it’s so powerful that it does so is an unexpected and quite fabulous bonus (it’s still one of my top referrers after direct traffic and Google).

Finally, Facebook is a social network, so make sure you’re using it as such. Engage your fans by posting things that they’ll actually enjoy and stop stressing that people that are missing your updates. Ultimately, Facebook wants to encourage social activity with it’s users so the best way to reach more people is to do that – create and share high quality content that the right people for your business are going to want to interact with.