Nicola and Nick were married on 29th December at Larnach’s Castle in Dunedin, New Zealand. It is the only castle in the country and is owned by Nick’s family. Angela Jane Photography was there to capture this special day. The wedding had a mad hatter’s tea party theme! 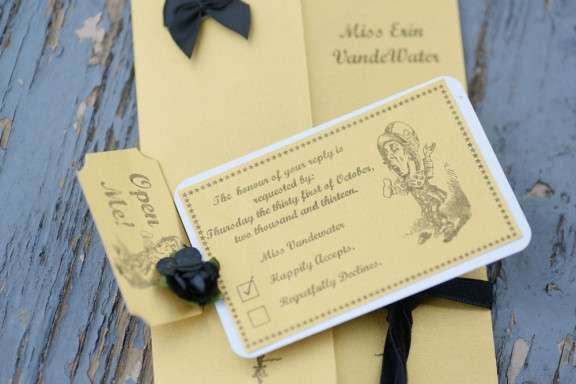 “Our story is pretty unique”, began Nicola. “My husband had an accident 14 years ago and was given 6 months to live. He had a series of strokes and has locked in syndrome, he cannot walk or talk and needs 24 hour care (he was featured on a TVNewZealand show which you can watch here). We met online. I was in the UK and he in New Zealand. We fell in love and I gave up everything to be with him in New Zealand. Four years later we got married! AND he walked, assisted by his physio and a good friend, down the aisle!!!!!” 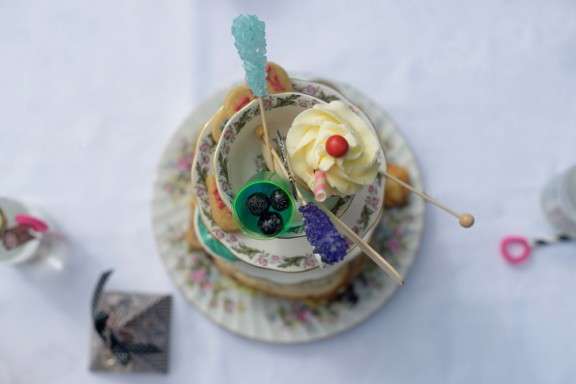 “We are both a little bit alternative,” she continued. “Nick never gave up his mohawk or the crazy lines shaved on his face and I love the rockabilly scene. Our wedding was a ‘Vintage Mad Hatter’s Tea Party.’ I made most things myself, hours spent at the dining table while Nick sat patiently next to me, advising me and playing scrabble on the iPod.”

“I drilled vintage teacups and china and glued together tea cups! I made wedding favours, jars of jam, heart shortbread, cookie mix, truffles and mocha mix. Bottles of bubbles and sherbet… I made my bouquet, the wedding comment cards and box, Nick organised a rotating box for the wedding cards.” 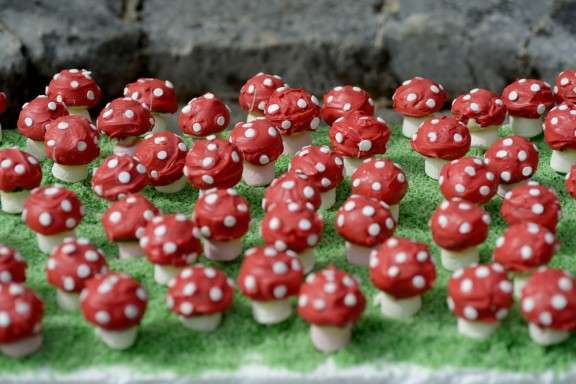 “We also designed our own wedding rings. Nick didn’t even want a ring until we met Iain Henderson. Nick’s ring features the Hot Tuna fish, which was his higher power when he went into rehab four years prior to his accident. Both rings have a split that represents the difficult times, both have gold stitches to represent us stitching up the difficulties and overcoming them.” 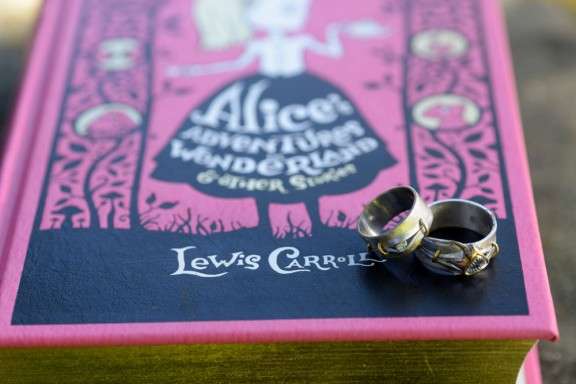 “We basically wanted our wedding to be as relaxed and as fun as it could be. Our celebrant worked with us to make the whole celebration an Alice in Wonderland ceremony, the whole ceremony was littered with quotes from the book. We had to think really carefully about Nick being in a wheelchair and the timing of everything and one of the quirky additions to our wedding was the white rabbit (good friend, personal trainer, Shane Waldron-Smith). At the end of the ceremony the celebrant pointed him out, at the top of some stairs in the castle and all the guests had to follow him around the gardens, in the mist… it was great fun to watch. Meanwhile Nick and I went to the old stables that had been transformed to a magical place where we had a huge tea party, with our nibbles before the main meal! We then went to the ballroom of the castle and had our dinner.” 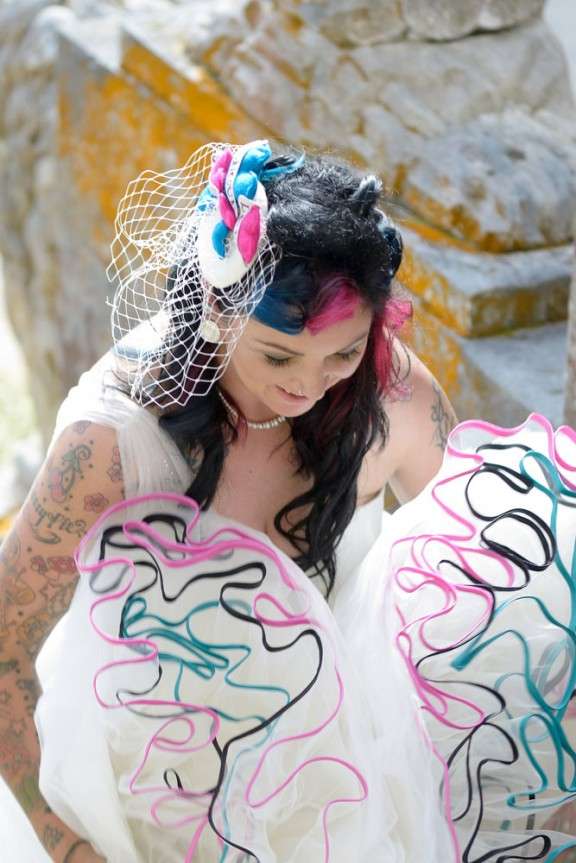 “When we had our second wedding celebration, we had the tea party again in the Alice in Wonderland themed garden at the castle and once again Shane was there as our white rabbit! He took on a whole new persona in that outfit and loved it… so did the tourists visiting the castle!”

“The most defining moment of the wedding was the moment that Nick walked in”, she smiled. “He had been secretly practising walking for months and was determined he would be able to walk into the room we were to be married. We had organised for Nick and I to have two of the old red velvet chairs from the castle to be married on, we didn’t want Nick in the wheelchair and me standing. The bridal party all had chairs too and the bubble girls had little cushions that I hand made for them with their names on.” 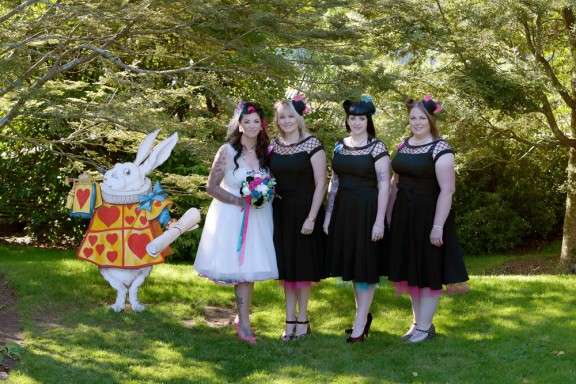 “I got a great sense of achievement and satisfaction at being able to contribute so much to the wedding”, Nicola concluded. “Making lots of things with Nick supporting, encouraging and inputting his ideas as well. We are both quite artistic and creative, so it was amazing to be able to make our day so unique and special. It was awesome that so many people came together, so many people offered their services to help us. From Norcombe Barker, whose family own Larnach Castle and helped us with the costs, to Mike who did the flowers twice and Angela Haig-McAuliffe who gave us the beautiful photographs we wanted! Just too many people to list who were amazing. Who were just so pleased to see this day, remembering the 14 years prior, Nick had been given just months to live!” 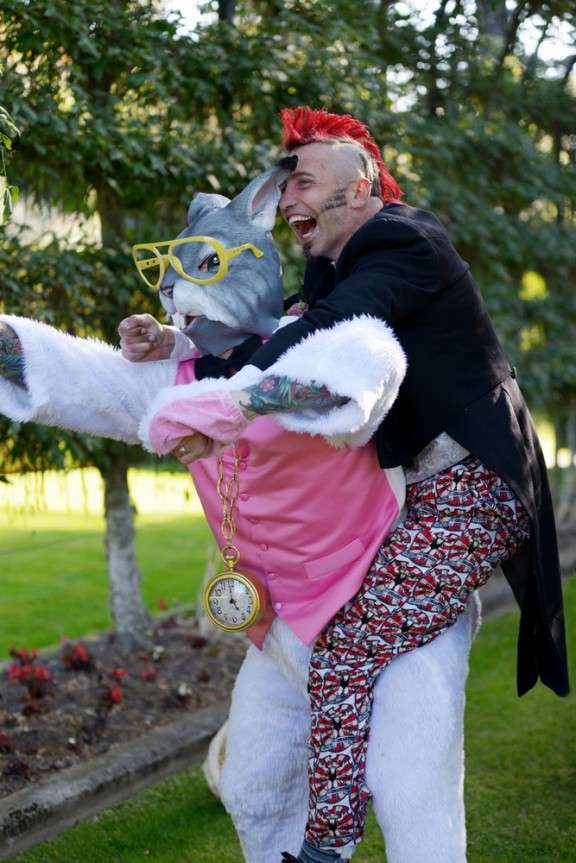 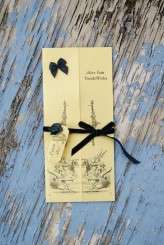 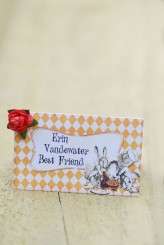 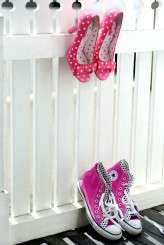 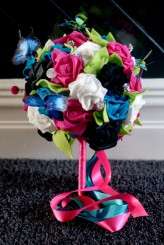 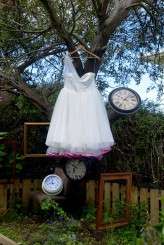 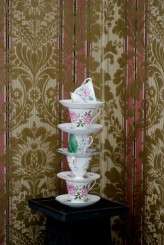 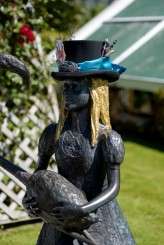 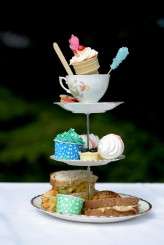 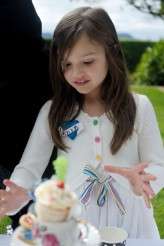 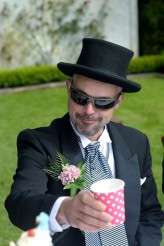 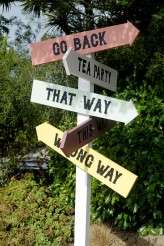 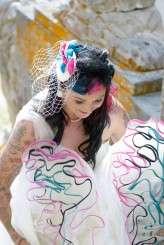 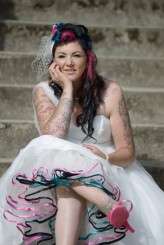 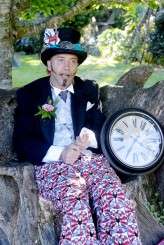 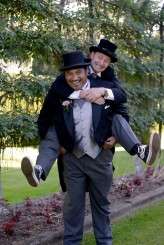 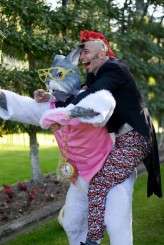 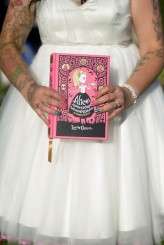