What are you procrastinating over right now?! Come on, admit it, you’re putting something off and reading this post instead aren’t you?!

I am in NO WAY perfect at this, in fact I’ve put off writing this post for longer than I’d care to admit. Oh the sweet irony. There is of course nothing wrong with a little escape from time to time, but if you procrastinate too much and you’re really not getting the important things done, you’ll end up in a constant negative spiral of putting things off. Not achieving the things that you know you have to is a sure-fire route to I-suck-at-life-ville. And no one wants to live there. So what can you do to stop the dreaded procrastin-monster and actually get things done already?!

You need to have a proper schedule in place for anything that needs regular attention – I’m talking emails, editing, blogging, creating invoices… all those tasks that you really don’t like doing but you know you have to. Not having a schedule is probably the biggest cause of procrastination because without one it’s all too easy to keep putting things off. Make sure you set aside a certain time each day/week/month to do each task. Remember no-one is going to do these things for you or make sure you stick to your plan, so first and foremost you need to be accountable for yourself.

I also recently read that it takes three months for a new habit to form, so be sure to stick at it. Eventually keeping on top of these things will become second nature.

Gala wrote a great blog post about the ‘eat the frog’ concept, which states that the key to getting things done is to start with the hardest, worst or least enjoyable jobs first. Basically you need to eat that biggest, ugliest frog before anything else.

“In fact, one of the basic tenets of the book is that you will NEVER GET EVERYTHING DONE”, Gala writes. “Isn’t that kind of a relief to hear?! Brian Tracy’s thinking is that since you’ll never get it all done, you simply need to prioritise what is really important…”

So instead of fannying about and spending a whole day working though the little, easy or more enjoyable tasks, start your day with the worst job first. You’ll feel a real sense of achievement when it’s done and much better equipt to get through the rest of your ‘to do’ list.

There is nothing worse than looking at a huge stretch of seemingly never-ending work. It’s all too overwhelming. Smaller tasks are much easier to complete so you’re less likely to put them off. So instead of looking at the bigger picture, break each task into smaller, more manageable chunks and work your way through methodically. If, after breaking things down, you’re still putting them off then break them down even further until you’re completing micro tasks without even thinking about it.

For example, at The Blogcademy we give each of our graduates a personalised report card with critique and suggestions for their own blogs. In London we’re doing two workshops of 30 students each… that’s 60 report cards we’ve got to write! If I was to think about having to do all of those in one sitting I might have a panic attack, so instead I’ve tasked myself with doing three per day for the next month and between myself and the other headmistresses we’ll be done in no time! 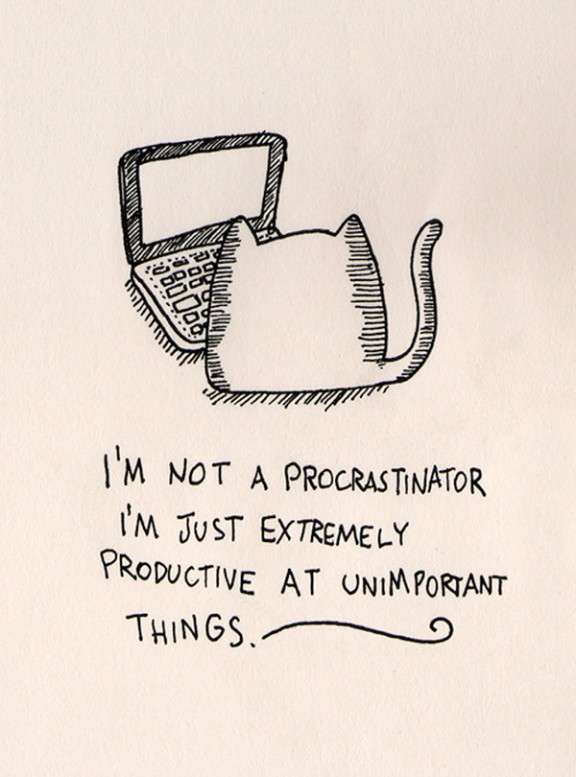 It’s all very well breaking things into small chucks to work through, but you must set yourself a deadline for each small task and a deadline for the overall project. If you have just one long deadline for something it’s easy to procrastinate because you perceive that you have all the time in the world.

For example I start working on my monthly column for Photo Professional magazine, about ten days before it’s due. On day one I chat to my editor and come up with a topic to discuss and then I email some photographers who I think might like to be featured as the case study. On day two I start to properly research the article and send my case study a bunch of questions which will help back up by argument. On day three I start to pull together my notes, I write bullet points and briefly outline everything I want to cover. During days four to eight I’ll flesh out the article and drop in the quotes from my case study. Finally on one day nine or ten I’ll perfect the piece and submit it to my editor.

Having set days for each mini task is crucial because I can’t get onto the next stage if I haven’t done the one before. It stops me putting things off because I know I need to stick to these mini-deadlines if I’m going to get the piece finished within the ten day window. But ten days is long enough that I’m not rushing or stressing too much.

If I was to start out by just starring at a blank word document whilst all the time thinking I have to submit a 2000 word article for publication every month, I’d be incredibly daunted and would probably never get started. But by setting myself small tasks that I need to complete by certain days in order to hit my overall deadline and knowing I have set myself a whole ten days to get it completed each month, it is all much less stressful.

I am a big fan of rewarding myself and no I’m not ashamed! For me, it’s a great motivator to think I’ll get something nice once I’ve made strides through my ‘to do’ list.  Having regular short breaks is also imperative. Just 10 minutes away from your computer with a nice cup of tea and you’ll feel much more able to tackle the next task at hand.

6. Do the little things right away

Big projects can be all to easy to procrastinate over, but sometimes it’s the smaller one that really make us come unstuck. Never put off the little things because you think they’re not a priority. They build up quickly and then they become a massive headache.

This might sound like a contradiction to everything else I’ve been saying in this article, but think about it. It might take you two minutes to reply to that email, or pay that bill, or put the washing on, but if you keep thinking “oh that can wait, I’ll do it later”, soon enough you’ll have a massive list of things that need doing all together. Do the little tasks as soon as you can!

At the end of the day it’s all very well reading these tips and thinking they make sense, but taking affirmative action is the only way to really stop procrastination for good. It’s no good just planning to put these tips into practice so go off and do it right now!