This week I was all set to write an article about copying, copyright in design and what to do when you percieve your work to be ripped off. And then, when researching the topic, I came across this TED talk by Johanna Blakely, entitled ‘Lessons from Fashion’s Free Culture’. Johanna questioned my ideas and flipped the whole subject on it’s head in my mind. I urge you to take 15 minutes out and watch this…

It’s slightly controversial thinking, but the facts seem to stand for themselves. I have always been fiercely defensive of people who’s work and designs get ripped off and replicated within the wedding industry. Stationers who see their ideas copied by ex-employees, dress designers who see versions of their gowns being sold for $100 by Chinese factories or $500 by David’s Bridal, wedding photographers whose editing style is copied and pasted… But in watching this video I have actually surprised myself with my thinking that maybe, maybe, it’s not always a terrible thing.

For example, and despite what you may think of it, the trend for vintage weddings has only be perpetuated, and in doing so been exceptionally lucrative for many wedding suppliers, because of copying!

It’s irritating to be copied yes, but the good news for the innovators is that it encourages them to continue to be creative – to force themselves to design something new to stay ahead of the curve. In order to remain at the top of their field, they are pushing new designs and ideas through with their unique and obvious stamp on it so that when (not if) it’s copied, everybody knows it was their idea first.

Being copied is frustrating, but hell, I’d rather be the iconic Givenchy shoe – the one that everyone wants to be replicate – than the cheap Steve Madden version any day. 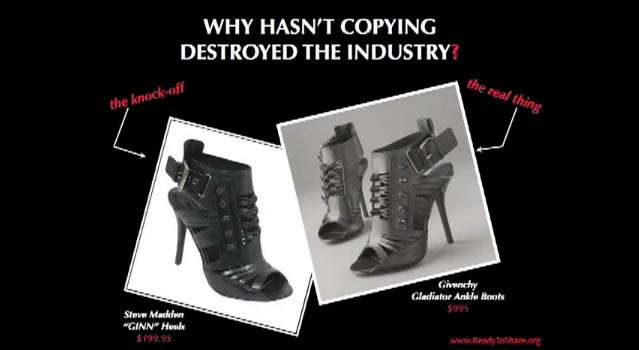