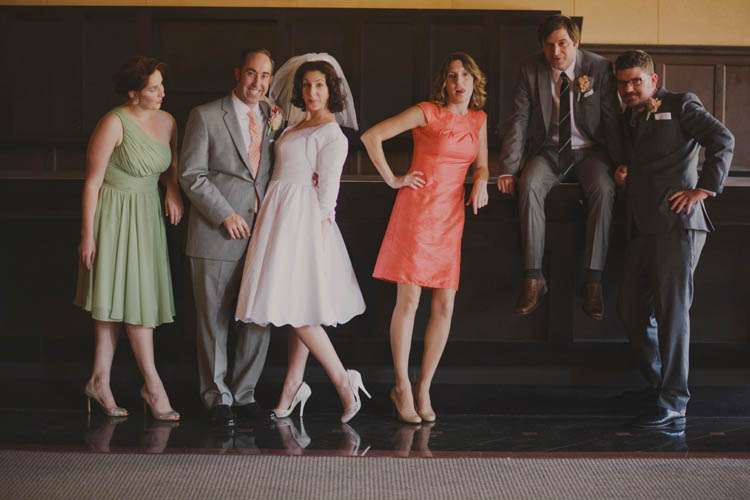 Jeff & Andy had a Jewish wedding at The Legendary Park Plaza Hotel, Los Angeles which turned out to be a very special venue for Jeff’s family. “After we had signed the contract with the venue, we found out from a relative that Jeff’s great-grandfather lived at the Park Plaza, when it was an Elks Lodge, for a short time in the 1940’s.” 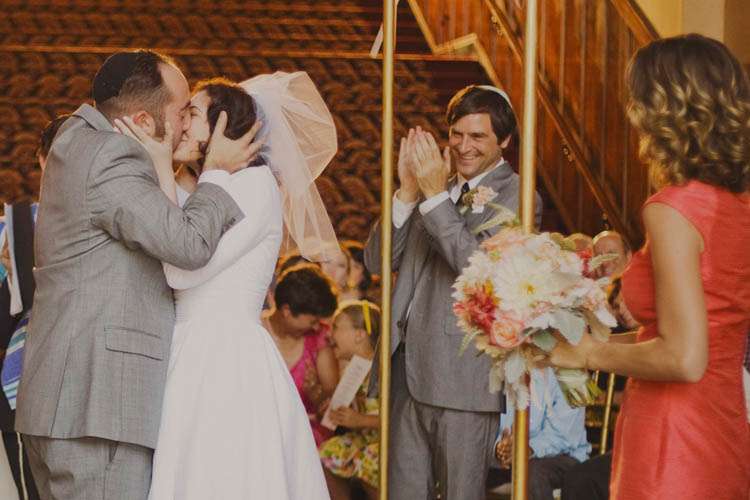 “We decided to include three pre-ceremony traditions that we didn’t know about until we started researching all the traditions around a Jewish wedding,” the bride told me. “For the men, Jeff had a ’tisch.’ We did our own interpretations of the traditions, so Jeff and the men gathered in a room to have some drinks and discuss the nature of love and marriage, as well as roast and laugh with Jeff about the past and the future. Meanwhile, the girls had ‘kabbalat panim,’ where the bride is treated like royalty, and I was serenaded by my friends. Finally, the men rejoined the women for the ‘bedeken,’ which is the veiling ceremony. This happens about ten minutes before the actual ceremony. Our parents offer blessings, and then the groom puts the veil on the bride.” 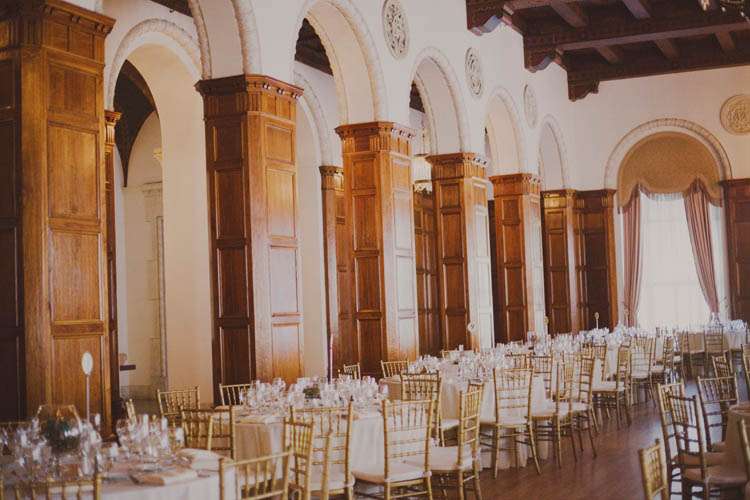 The couple wanted to add their personal stamp to their day as much as they could.  Their venue was pretty dramatic and gorgeous all by itself so they didn’t really need to create any decor items, yet they certainly put their DIY energies elsewhere! “We are both creative people with significant creative vision with a great love for throwing a well-planned party,” Andy wrote. “To that end, we took it on ourselves to create just about everything that we could. Many DIY weddings have a lot of emphasis on decorating a venue, but our venue was already a gorgeous historic building that was kept in great condition, so we spent our creative energy on personalizing the event.” 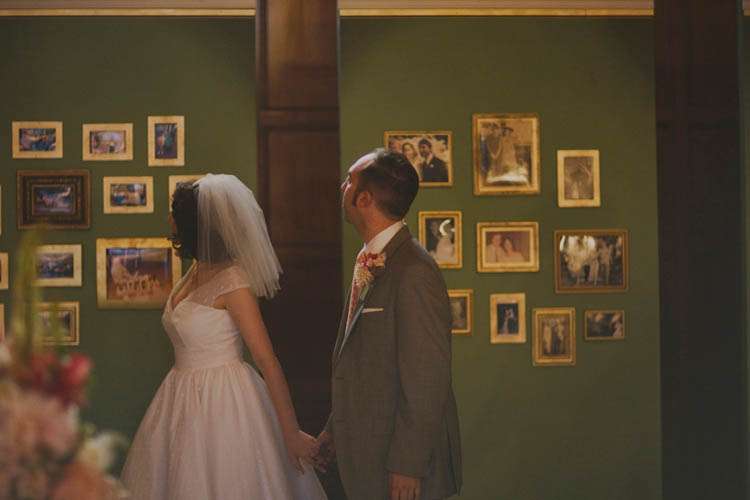 “We started by designing a logo for our wedding. Something that would end up on all our invitations, paper goods, programs, photo-booth pictures, thank-you notes, etc. Once we had that, Jeff designed the invitations and reply cards. The reply cards were blank on one-side and we encouraged all invitees to write or draw something on that back, that we later incorporated into a gallery displayed at the wedding.” 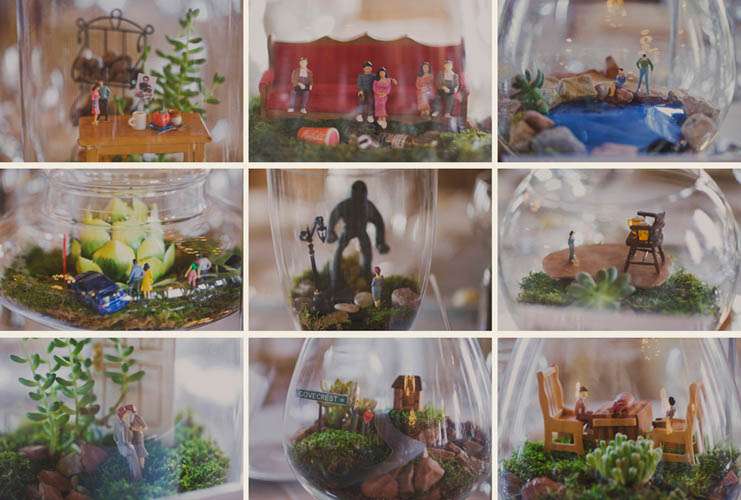 “We love dating and exploring our city and we love miniatures and we were determined to figure out a way to incorporate both,” she continued. “By far our most ambitious project, something that we definitely worked the hardest on, was the twenty, individual, terrariums for the centerpieces of each table. Each one was a different diorama, in a different glass container, of one of our favorite places. This entailed scouring every Ross, Big Lots, and Wal-Mart for cheap, apothecary-style jars and vessels, that were big enough to be the focal point of a ten-person table.” 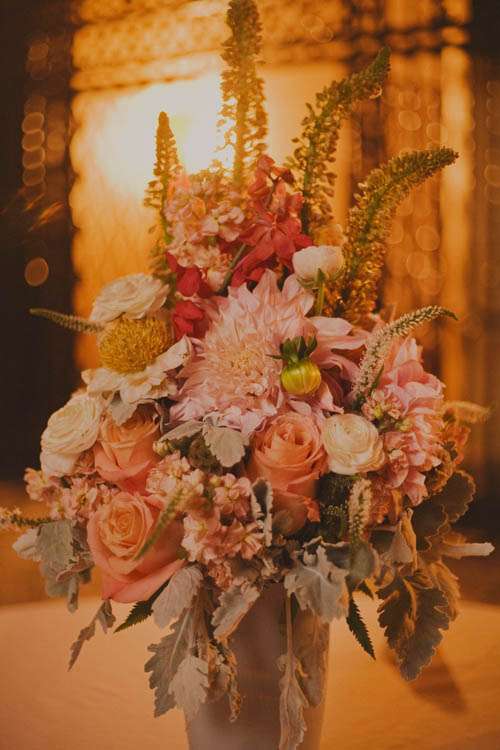 “The actual dioramas were a collection of toys, model train people (eBay, train stores), dollhouse furniture (which for some strange reason we had a lot of), and single bottles of booze for the bar-themed dioramas. The centerpieces were placed on 16” circular mirrors and accompanied by a museum-style description placard in a clear acrylic frame. The centerpieces were our biggest challenge and the DIY element of our wedding that we were most proud of.” 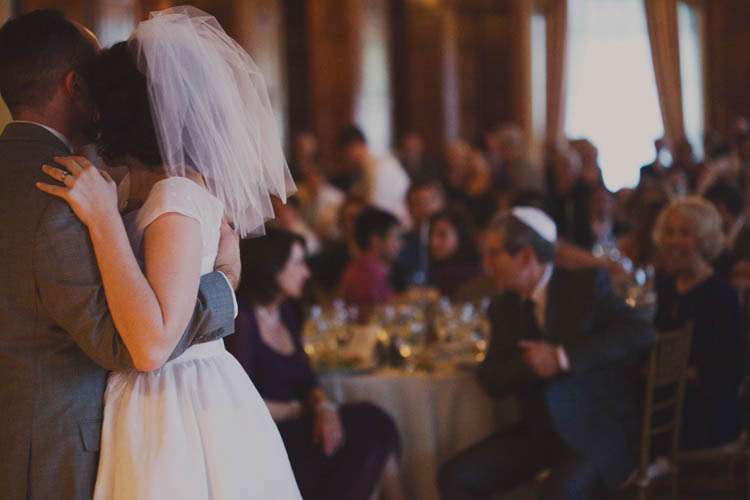 “Finally, months before the wedding, my dad found a film-reel from his 1954 Bar Mitzvah! my Dad had the footage digitized and we got a friend to edit a loop of the people dancing, hook up a projector, and we projected the footage behind our DJ when our dance floor opened. The effect was magical, and felt like it added a whole room of family and friends dressed perfectly to match the vintage-vibe of the venue.” 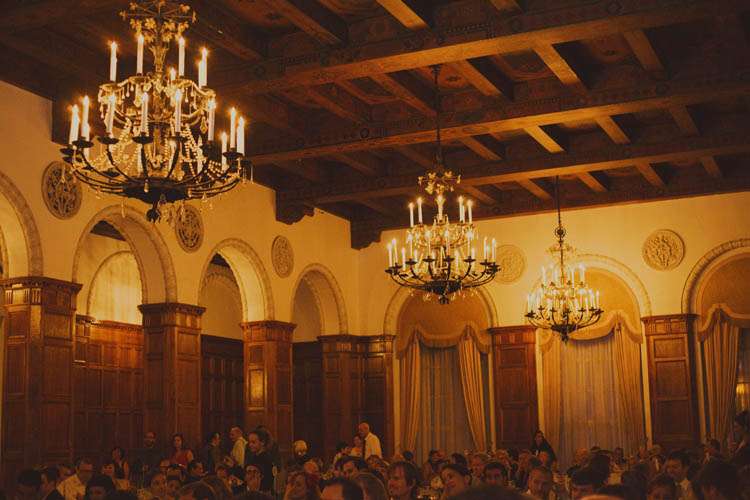 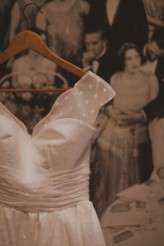 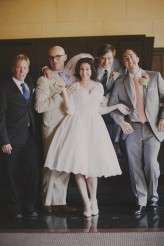 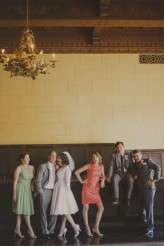 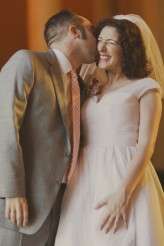 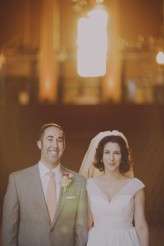 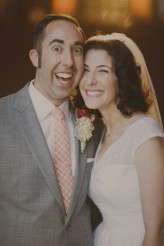 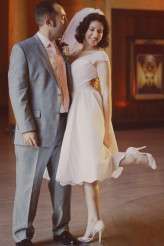 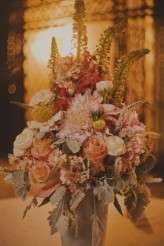 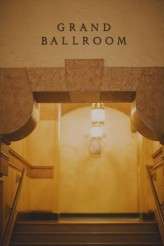 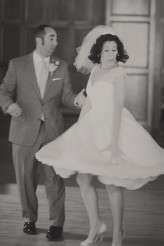