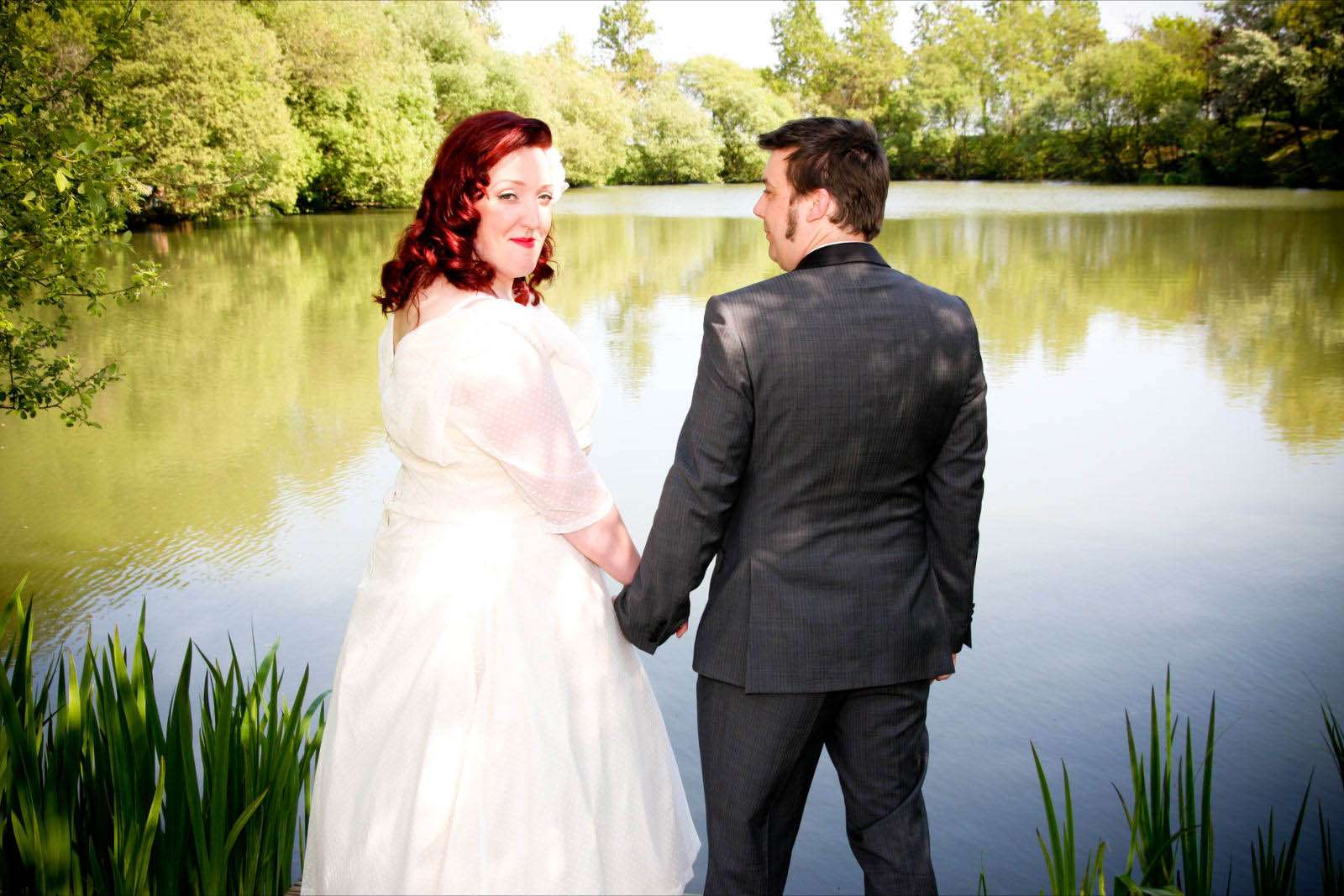 Steve & Shelley’s Isle of Wight wedding had a post-war vintage and DIY theme. The couple were keen not to spend a fortune on their day and the theme really evolved quite naturally and organically from this idea. “We were conscious we did not want to spend a fortune on our wedding and the theme of ‘Post-War Britain’ fitted in nicely with our DIY wedding,” the bride told me. “Everything was done on a budget, a lot sourced from eBay, friends and family helped to make bunting and paper chain hearts for decorating the reception venue.  Our favours were Thorntons chocolates wrapped in brown wrapping paper with blue butchers twine (eBay again) and a parcel tag attached with the guests name as a place card. I handmade the invitations which were a shimmery Union Jack postcard style with the invitation wording as a telegram, on the invitation we requested that guests attend in their interpretation of post-war Britain dress, and gladly the majority of guests did so!” 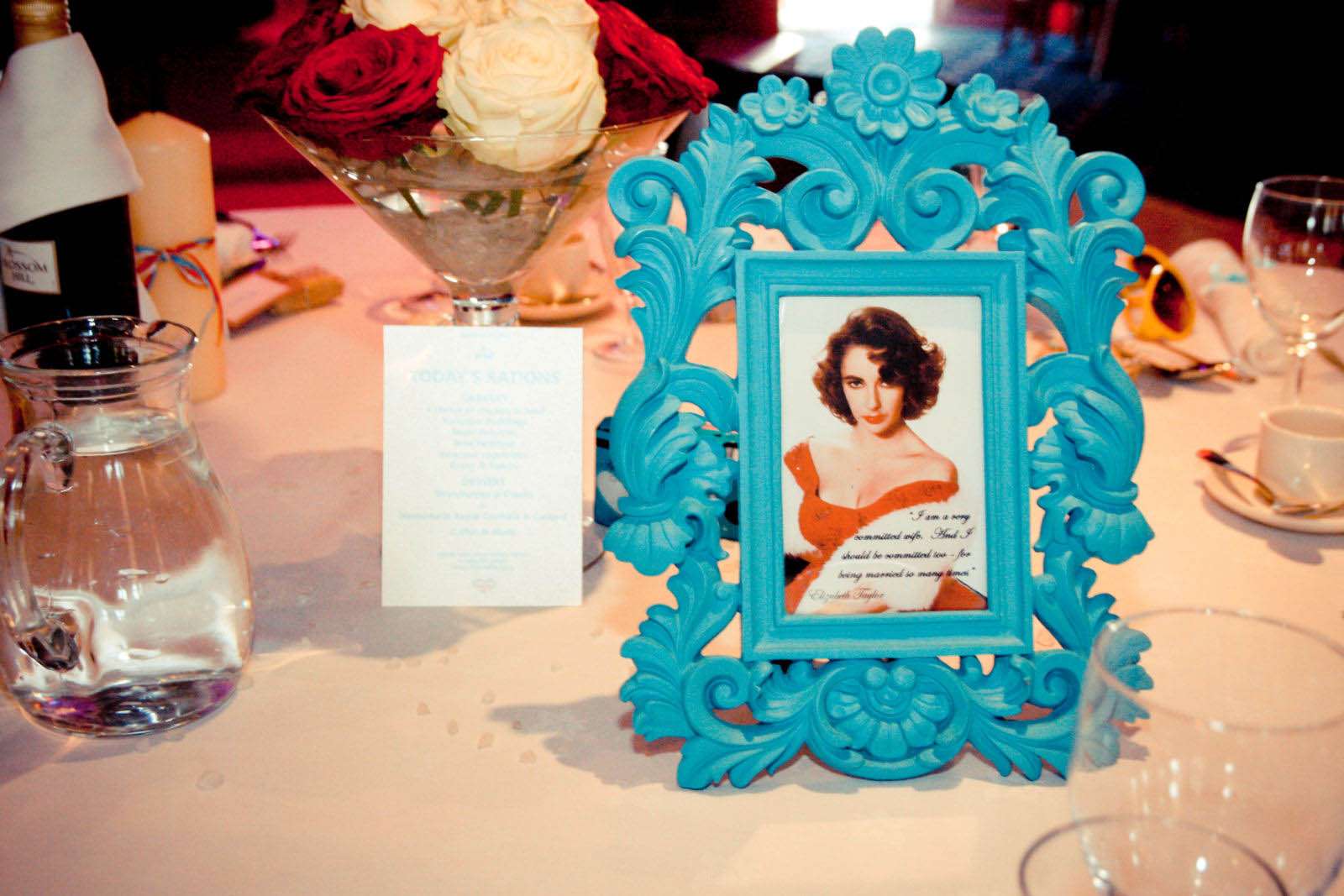 “The Orders of Service were also handmade, inspired by the ‘Keep Calm & Carry On’ poster campaigns from World War Two.  We had a simple non-religious service which included a reading from “The Velveteen Rabbit” by Margery Williams.  The chapel was simple and perfect for our day, and we were the first wedding there in four years! We exited the chapel to a church organ version of Frank Sinatra’s Love & Marriage.” 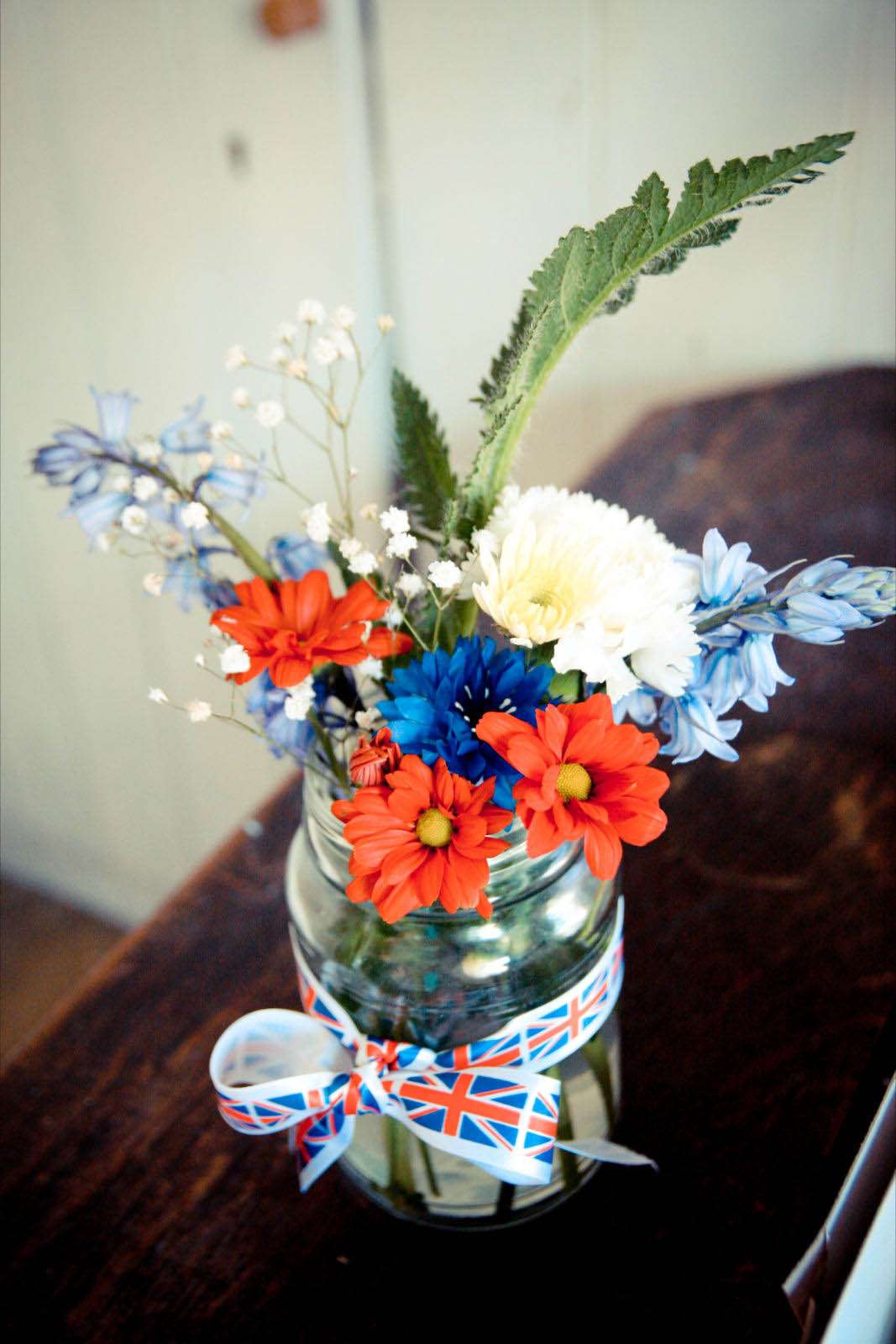 “We had martini glass style table centrepieces (from eBay again) on the tables at the reception, filled with white and red roses.” Shelley continued. ” We decided on table names rather than numbers and chose British personalities from the 40’s & 50’s including Elizabeth Taylor (the ‘top table’), Vera Lynn, Diana Dors, Winston Churchill & Norman Wisdom!  For the table plan I used a Union Jack flag bought from Sainsbury’s (around the time of the Royal Wedding, we were lucky that everywhere was selling all things Union Jack!) mounted onto card, with the relevant personality’s photos next to the guests seated at each table.  We also had ration card style menu’s on the tables.  Upon arrival at the reception venue and throughout the meal, we had Glenn Miller Band playing in the background. The evening buffet consisted of a candy buffet of traditional sweets, and a british ‘afternoon tea’ – scones, jam & cream, sausages on union jack sticks and sandwiches.” 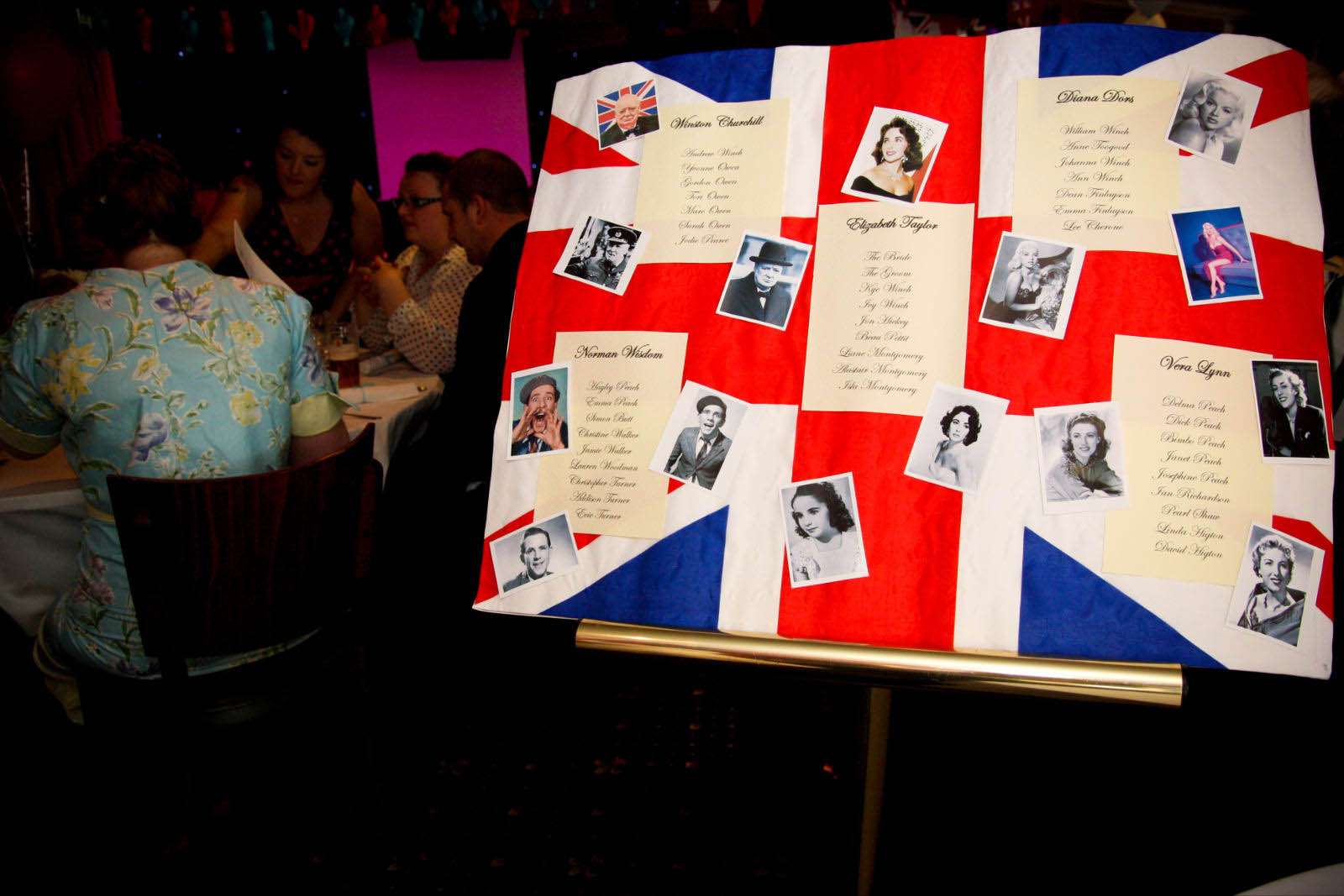 “We didn’t want a traditional wedding. Steve loves his classic cars and I love the 40’s and 50’s fashion, so we went for Post-War Britain, an era where things were very much do-it-yourself and on a budget and the fashion was beautiful and women really looked like women!  In all, we spent just over £2000 on our wedding, and we managed this because we hunted high and low for the best deals and friends and family helped wherever they could.  No one seems to believe us when we tell them what we spent – but believe me it really can be done – it just takes a lot of time to source the bargains.  Plus, Rock n Roll Bride was a big source of inspiration and ideas!” 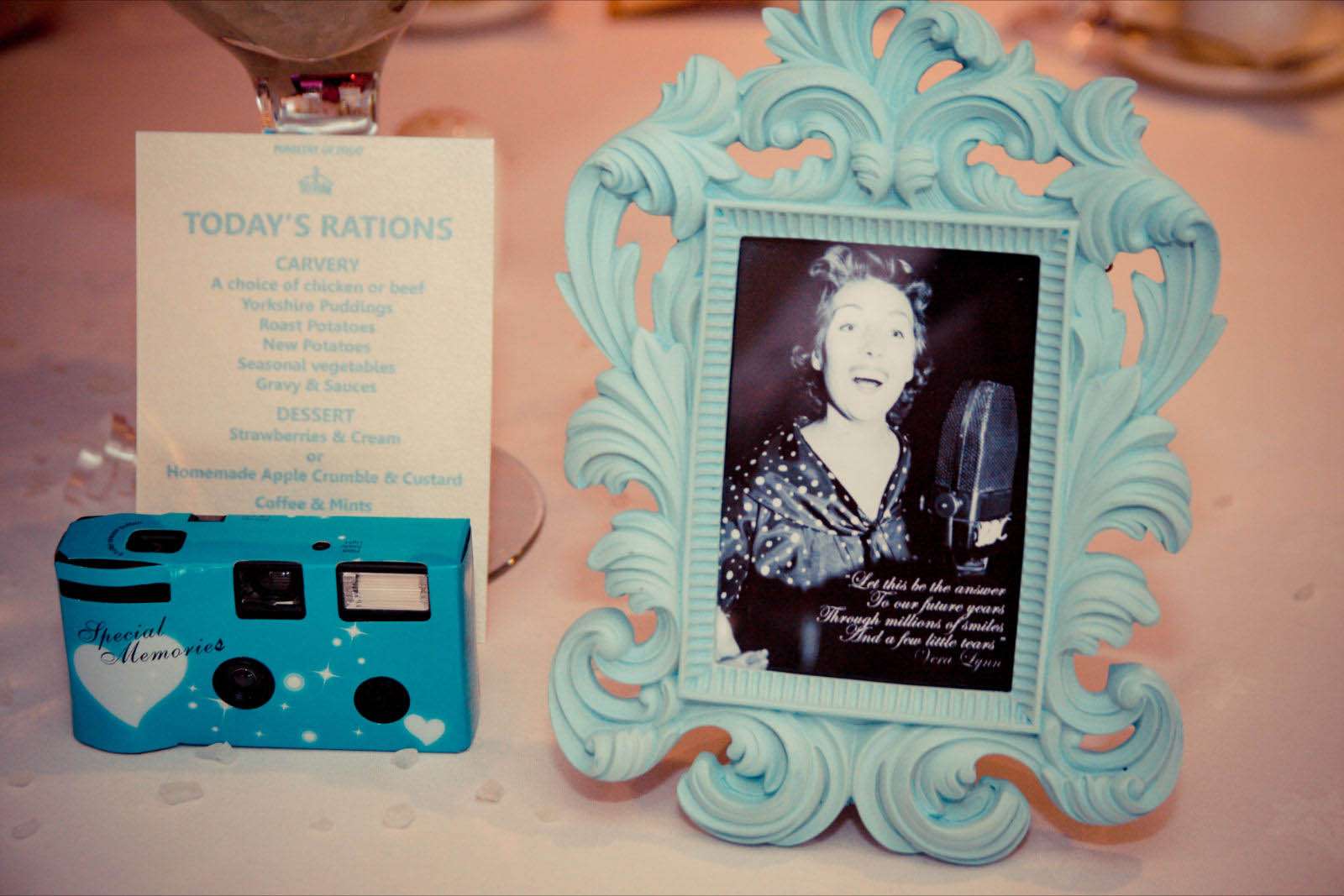 Thanks so much to Steve & Shelley for sharing their beautiful day with us. 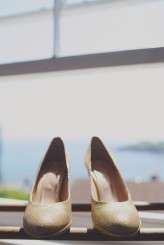 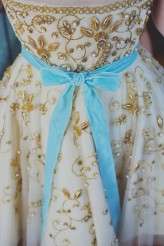 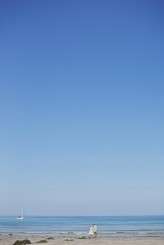 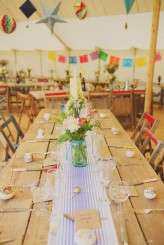 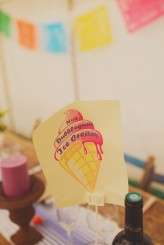 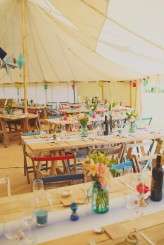 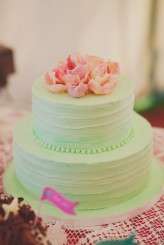 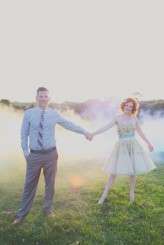 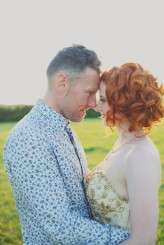 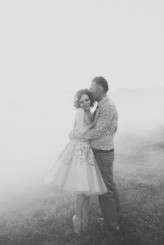 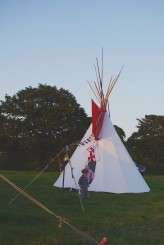 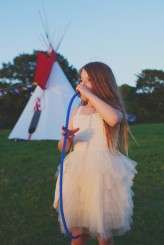 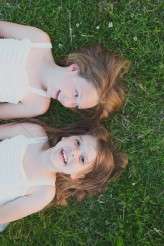 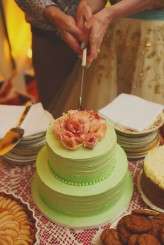