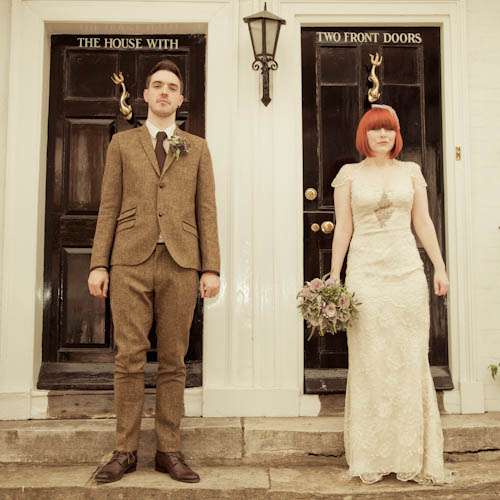 Cute, quirky, British weddings are my utter favourites to feature. There’s so much originality and such fabulous ideas floating around this industry of ours, and it really really excites me! I was lucky enough to meet Heather, the photographer who captured this beautiful wedding, at the Unveiled Photography Conference that I spoke at in July so I’m so excited to see that she’s put what she learnt in to practice with this killer wedding.

Helen & Dan were married in September in Rye. Their theme was “a good old-fashioned Coronation Street party/1940s tea party feel”. Originally the couple had planned to have an Alice in Wonderland theme, however after the film came out, and the whole world went Alice mad, they decided to do something different and more unique. “My mum is a magpie for nice bits and set about scouring the length and breadth of Lancashire’s charity shops for table decorations, the cups and saucers, the teapots and the candelabras” began the bride. “Dan’s nan volunteers in a charity shop, so she managed to pick up some lovely pieces too.” 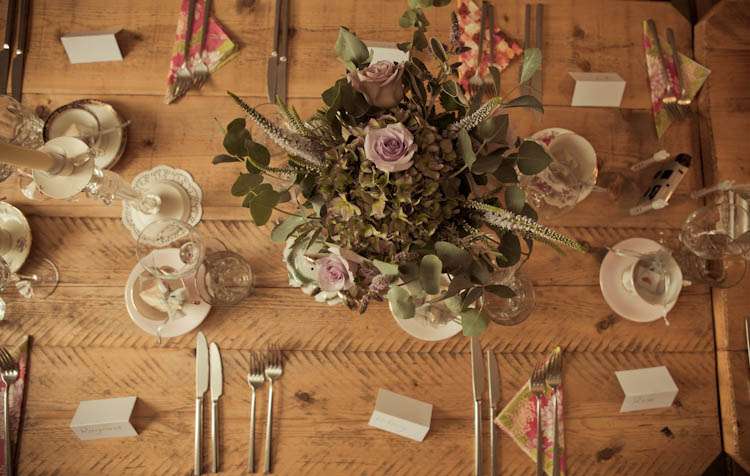 “The outfits were the thing that I was most concerned about and probably spent the most time ruminating over. I KNEW it had to be a retro/1940s feel but the shops were all a bit full of conventional, uninspiring things. I scoured the internet and, thankfully, found Claire Pettibone, an American bridal designer. Her stunning gowns are stocked at Blackburn Bridal in London. Once I had the dress, it felt like everything else fitted into place.” With her dream dress, Helen wore Irregular Choice shoes and a hairpiece by Orelia. 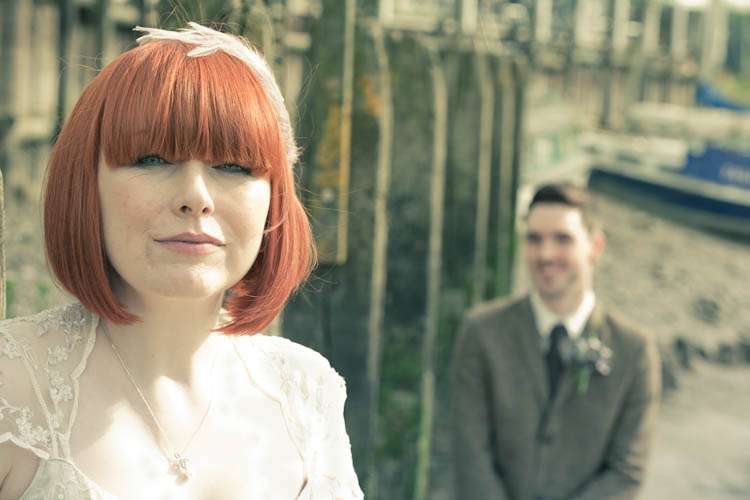 Helen continued, “Neither Dan or I are religious, and we were both paying for the wedding ourselves, so we knew we wouldn’t be going down the traditional route! No older family members to please. Our readings at the ceremony reflected our desire to do things differently, and we had ‘To Love is Not to Possess’ by James Kavanaugh and the Doctor Seuss ‘Wedding Vows’.  My older sister and her son read the Doctor Seuss piece, to much laughter from the congregation, and Dan’s mum read the To Love… piece.” 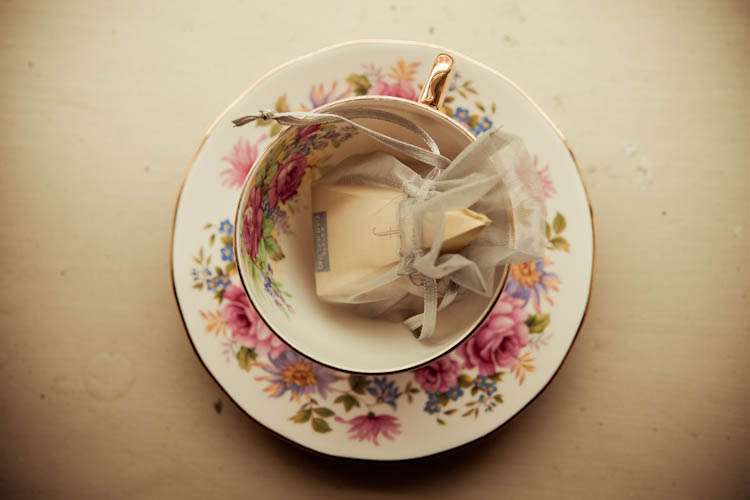 “We’re both really big Blur fans, so it seemed appropriate to walk up the aisle to ‘Tender’. Dan came to the doors of the wedding chamber and met me so we could walk down together. I was so happy to see him when the door opened! My friend said he knew I was nervous when he saw my dress hem “trembling”! Our exit tune was ‘Celebrate’ by Kool & the Gang, and our first dance was ‘To The End’, again by Blur.” 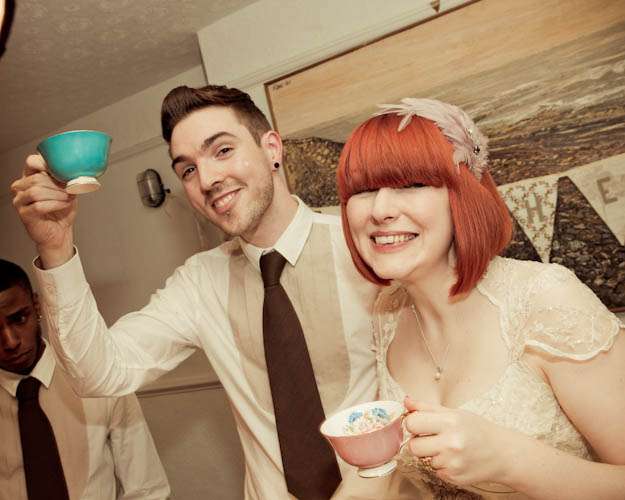 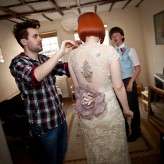 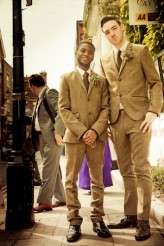 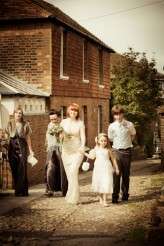 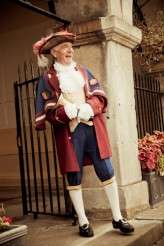 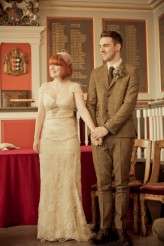 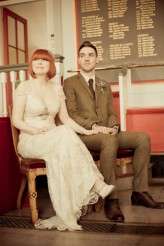 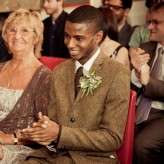 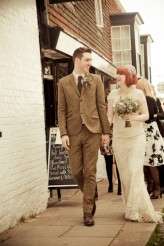 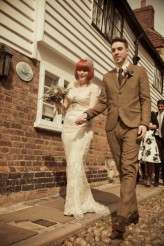 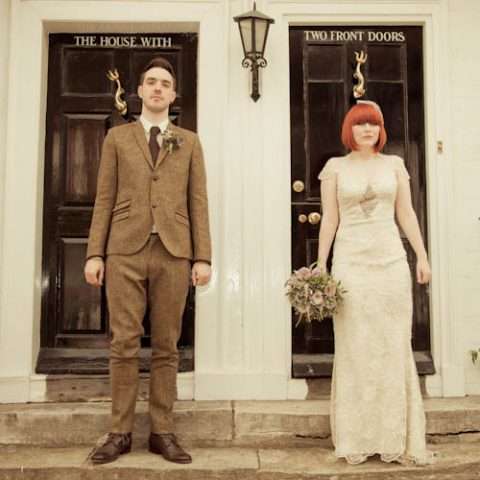 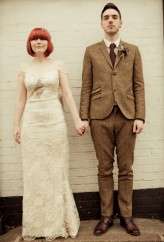 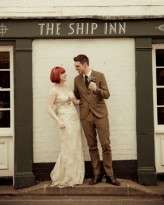 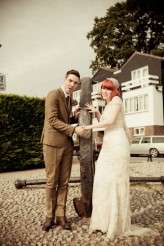 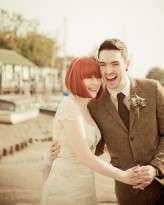 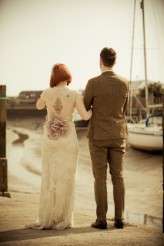 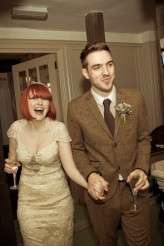 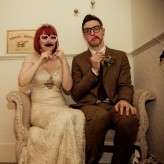